Was Alexander Nevsky named after Alexander the Great? 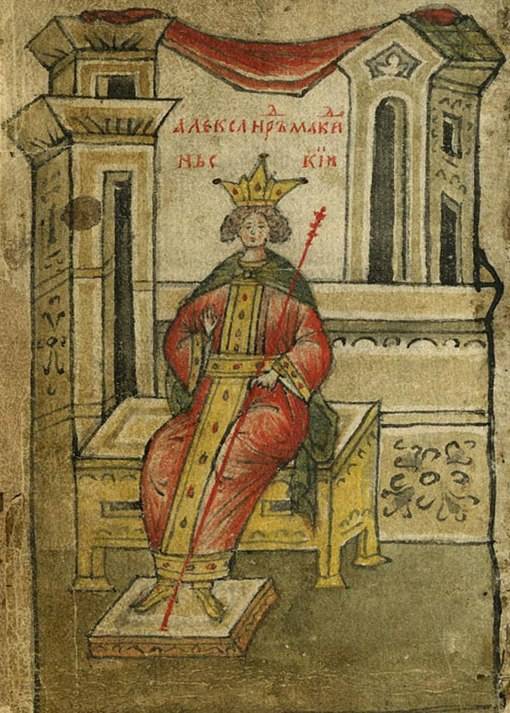 Illustration of one of the lists of "Alexandria"

It is known that before Alexander Nevsky the name Alexander was not worn by any of the ancient Russian princes. Suppose that this prince-commander was named after the tsar-commander Alexander the Great. Could it really be?

In Ancient Russia, they learned about Alexander the Great from a historical novel translated from Greek, known under two names: "Acts of Alexander" (Άλεξάνδρου πράξεις) and "Life of Alexander the Great" (Βίος Αλεξάνδρου του Μακεδόνος, whose authorship could not be established). In Russian translation, the novel is called "Alexandria" or "Alexandrida". How and since when did this work become available to the Russian-speaking reader?

One of the subtitles "Alexandria", roughly coinciding with the Greek names
Alexandria is an integral part of a collection of translations called The Greek and Roman Chronicle. The first of the two existing editions of the Chronicler, in addition to Alexandria, includes two more works by Greek authors, namely the Chronography of John Malala (1th century) and the Chronicle of George Amartolus (XNUMXth century), that is, XNUMX- i edition covers the period of the world stories from Adam to the Byzantine emperor Theophilos (829–842) inclusive. It is noteworthy that both of the named historical writings tell about Alexander the Great.

The Russian philologist V. M. Istrin in his work "Alexandria of Russian Chronographs" (Moscow, 1893) determined that the 1st edition of the "Chronicler" was created before the middle of the XIII century. He also established that the Old Russian version of Alexandria was distributed only as part of the Chronicler.

The Soviet philologist A. S. Orlov in his work "Translated Tales of Feudal Russia and the Moscow State of the XII-XVII Centuries" (L., 1934) gives the opinion that the 2nd edition of the "Chronicler" already in the 1st half of the XIII century. influenced the Russian annals, which formed the basis of the Ipatiev Chronicle and the Moscow Chronicle.

The Soviet philologist O. V. Tvorogov, in his research "Old Russian Chronographs" (L., 1975), believes that both editions of the Chronicler that have come down to our time go back to its archetypal edition that has not survived, the composition of which more fully corresponds to the composition of the 1st edition of the Chronicler "(See also his notes to the publication: Chronicler Yellinsky and Roman. In 2 volumes. St. Petersburg, 1999-2001).

As for Alexandria itself, it also had two versions. According to A.S. Orlov, the original version, which appeared in the XNUMXnd – XNUMXrd centuries, is the Egyptian-Alexandrian version, which probably arose in Egyptian Alexandria. This version was later Hellenized. The second version is a Judeo-Christian, probably created in Jerusalem. In it, "Alexander is depicted as an admirer of the Jews and their monotheistic confession, and also prophesied about the coming of Christ." One would expect that this version of Alexandria would be included in the Chronicler, but A. Orlov claims that it included a Hellenized version with inserts from the Chronicle of George Amartol. The latter was translated from Greek in Bulgaria in the XNUMXth century. She also brings to Alexandria episodes of Alexander the Great's veneration of one God, as is the case in the Judeo-Christian version. Thus, this Hellenistic king was not perceived in Russia as a pagan.

From all of the above, we can conclude that in Russia information about Alexander the Great from written Russian-language sources began to spread no later than the XII century. Whereas Alexander Nevsky was born ca. 1220, we come to the conclusion that "Alexandria" could become the reason for the name of our Grand Duke Alexander Yaroslavich Nevsky, named in honor of the great Tsar Alexander Filippovich of Macedon.

Ctrl Enter
Noticed oshЫbku Highlight text and press. Ctrl + Enter
We are
A great interview with Sergey Lavrov: about Ukraine, Obama and IranWhat you didn't want to know about England
Military Reviewin Yandex News
Military Reviewin Google News
40 comments
Information
Dear reader, to leave comments on the publication, you must to register.