Postponed end of the war. The uprising of Georgian legionaries on Texel island 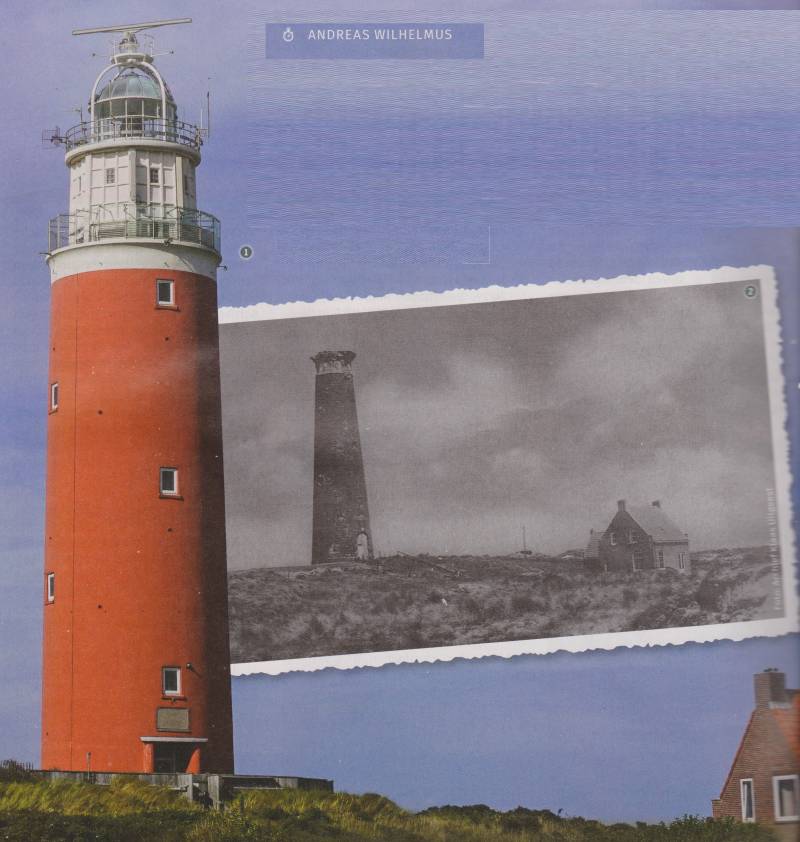 Translation of an article from Deutsche Waffenjournal, no. 6 for 2020. Lyricist: Andreas Wilhelmus. Translation: Slug_BDMP.

In early April 1945, on the Dutch island of Texel, a bloody uprising of Georgian soldiers of the 822nd Infantry Battalion of the Wehrmacht against their German comrades began. Some historians call these events "the last battle of World War II in Europe."

From the seaport of Den Helder, double-decker ferries depart regularly during the tourist season with a frequency of once every half hour to Texel Island, separated from the mainland by a 5-km shallow strait. Today this island is very popular with many tourists, including German ones. One of the main attractions is the Ayerland lighthouse in the village of De Cocksdorp in the northern part of the island. Only those who bother to head to the lighthouse may notice a bunker hidden in the dunes, reminding that this idyll has not always reigned on the island. But most of the visitors to the lighthouse are more interested in the picturesque landscape that opens from the tower.

The lighthouse was badly damaged during the war, and during the restoration a new wall was erected around the surviving parts. A passage was left between the 5th and 6th floors, where numerous traces of bullets and fragments remained. And only those who are seriously interested can find out where, when and how the hostilities ended in Europe.

During the campaign against France in May 1940, German troops invaded neutral countries: Belgium and the Netherlands. Five days later, the Netherlands were forced to capitulate and the country was occupied by the Germans. On May 29, a Wehrmacht quartermaster arrived on the island to prepare him for the arrival of troops. There they were already awaited by some of the defensive structures built by the Royal Dutch Army in the interwar period. The Germans were not satisfied with them, and as part of the construction of the Atlantic Wall, they built numerous additional fortifications. Thus, by the end of the war, there were about 530 bunkers on the island. 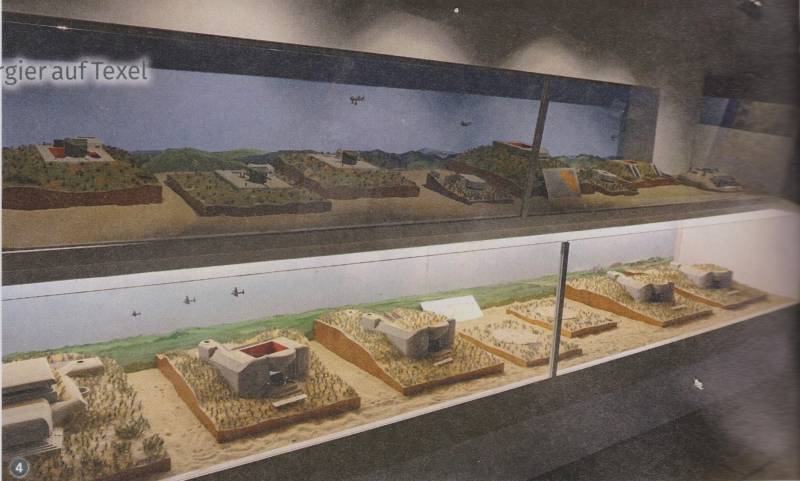 Texel Island Bunker Models - Parts of the Atlantic Wall on display at the local military and aviation museum
During the occupation, the Germans enjoyed the support of local supporters of the Dutch National Socialist Movement, who constituted about 7 percent of the island's population. The island was strategically important as he and Den Helder covered important convoy routes from the mainland to the West Frisian Islands. For the British side, the island served as a reference point for bombers. Some of them were shot down over the island by the German air defense and aviation... This is evidenced by 167 graves of British pilots in the cemetery of Den Burg - the administrative center of the island.

But active hostilities bypassed the island until the very end of the war.

In general, the life of German soldiers on the island was quite calm, and in the summer months it generally resembled a resort. Not like their comrades on the Eastern Front, sent by Hitler on June 22, 1941 against a former ally. Soon they stood at the gates of Moscow, but in December 41 they were forced to go on the defensive, since the Russians were better prepared for war in winter.

There, the Germans began to recruit prisoners of war of non-Russian origin for the so-called eastern legions. One of such legions was the Georgian one, formed in 1942 at a military training ground near the Polish Radom.

The core of this formation was the Georgian emigrants who fled from the Bolsheviks and found refuge in Germany. To them were added the Georgians recruited in the prisoner of war camps. Of course, among these defectors were convinced supporters of Georgia, independent of the Soviet Union, but the majority simply wanted to break out of the camps with their cold, hunger and disease and just survive. The total strength of the legion was about 12000 men, divided into 8 infantry battalions of 800 men each. Also, the legion consisted of about 3000 German servicemen who made up its "frame" and occupied command posts. The formal commander of the legion was the Georgian Major General Shalva Mglakelidze, but there was also a German headquarters subordinate directly to the German commander of the eastern legions. Part of the legions were stationed in France and the Netherlands to maintain the occupation regime and defend against a possible Allied invasion. 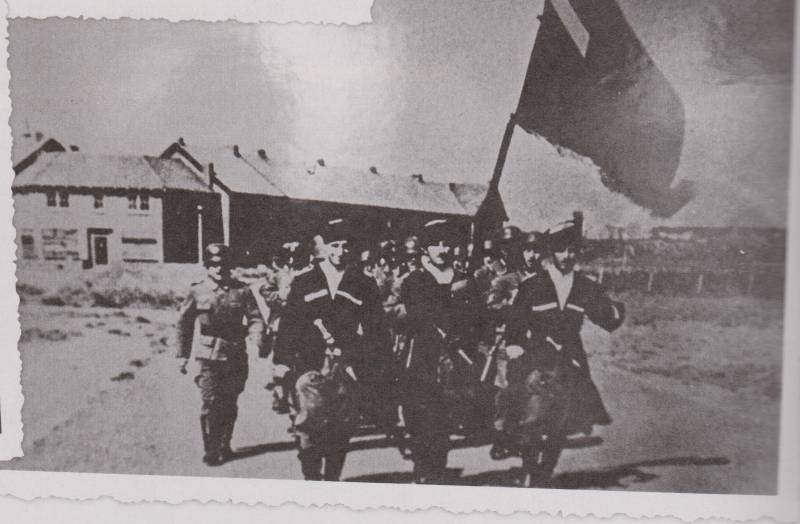 Parade of the Georgian Legion. The officers are dressed in national costumes, while the privates are in the field uniform of the Wehrmacht
Thus, the 822th Georgian Infantry Battalion "Queen Tamara" was sent to the Dutch Zandvoort to participate in the construction of the "Atlantic Wall". Here, the first contacts of pro-Soviet Georgians with representatives of the left wing of the Dutch Resistance were established, which, after the landing of the Allies in Normandy, resulted in a plan for a joint uprising against the German occupiers. This should have happened at the moment the Georgians were sent to the front line. In addition, the Georgian legionaries supplied the underground weapons, explosives, ammunition and medicines from German stocks. But on January 10, 1945, the 822th battalion was transferred to Texel Island to replace the North Caucasian Legion unit there. But even there, the legionnaires quickly established contact with the local Resistance and developed a plan for an uprising. Its code name was the Russian expression "Happy birthday". After the war, the commander of the 822th battalion, Major Klaus Breitner, said in an interview that he and other German soldiers in the battalion were unaware of the impending uprising. 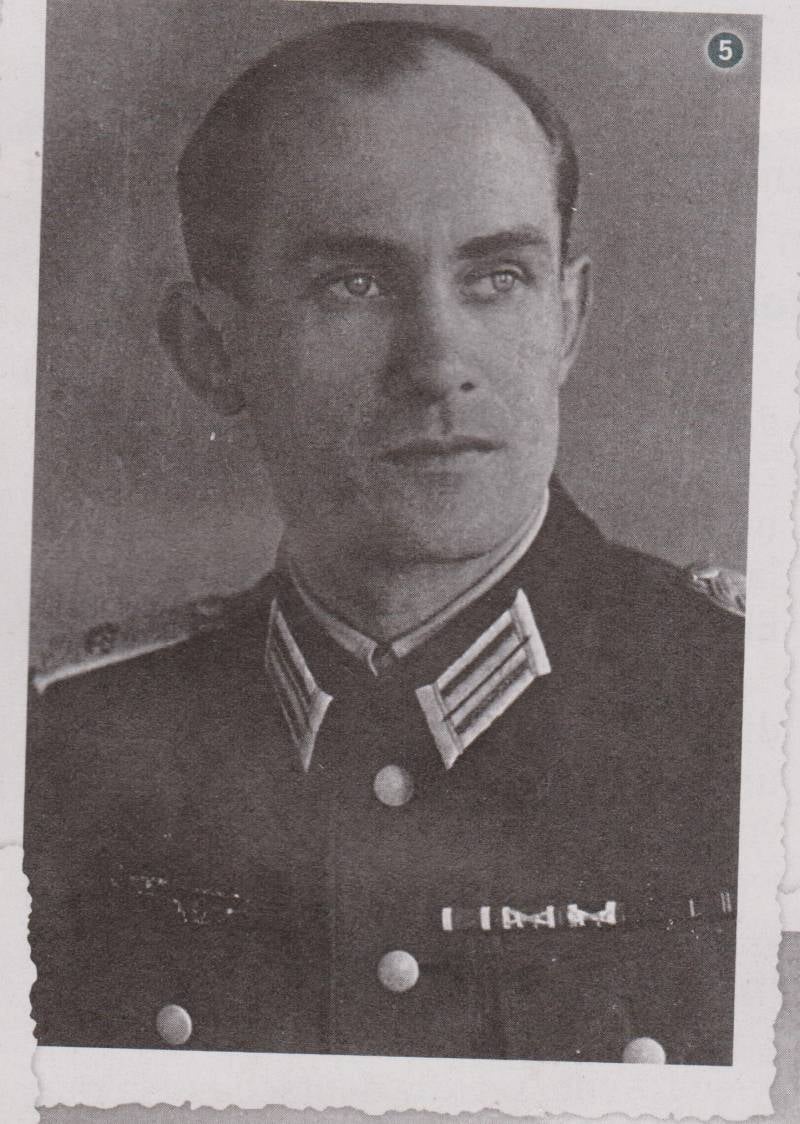 This day came on April 6, 1945 exactly at 1 am. The day before, the Georgians learned that 500 of them would be sent to the mainland - to the front. They immediately informed the Dutch underground about this. They also hoped that other eastern legions on the mainland would join the uprising. The leader of the uprising on Texel Island was the commander of the 3rd company of the 822th Georgian battalion, Shalva Loladze. To use the surprise effect, the Georgians attacked the Germans, using only edged weapons - daggers and bayonets. The guards were formed so that they included one Georgian and one German. They attacked suddenly, and therefore managed to destroy about 400 Germans and Georgian officers loyal to them, but the battalion commander, Major Breitner, managed to escape. 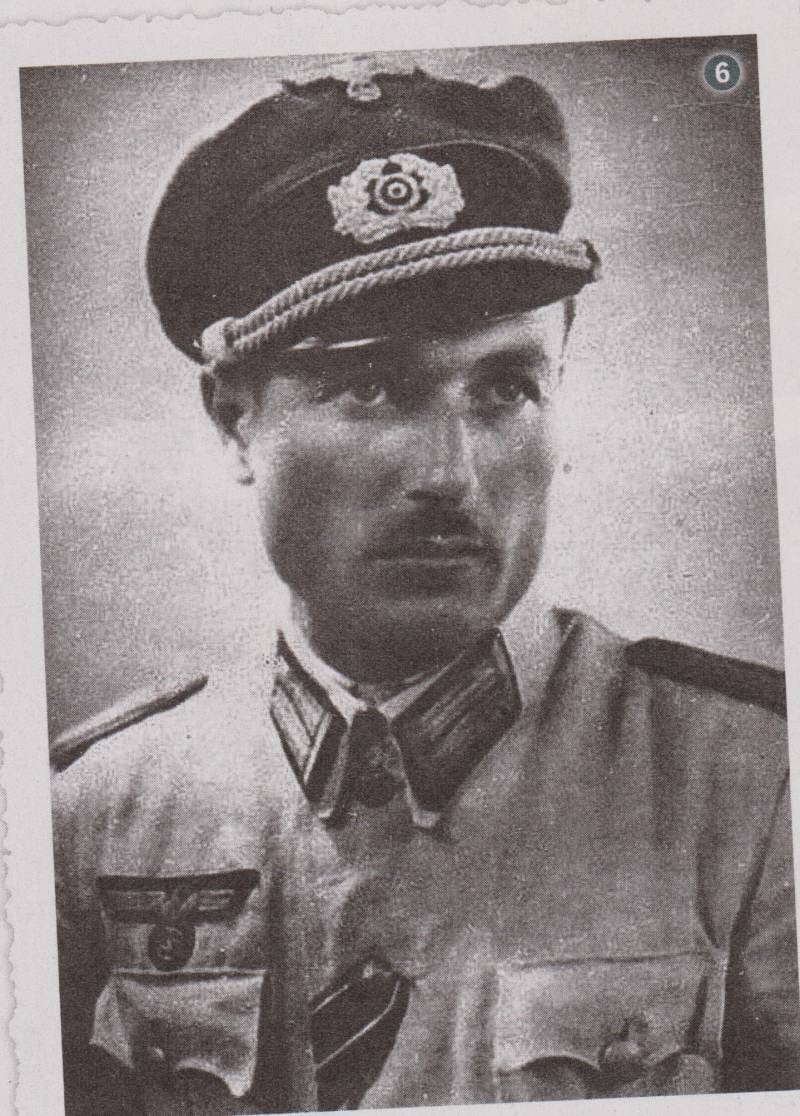 The leader of the uprising Shalva Loladze, a former captain of the Red Army Air Force. In the photo - in the form of the Wehrmacht
However, Loladze's plan was not fully implemented. Although the rebels managed to take possession of Den Burg and the Texel administration, they could not capture the coastal batteries in the south and north of the island. Major Breitner managed to get to the southern battery, contact Den Helder and request support. Also, the events on the island were reported to the main apartment in Berlin. The response was an order: to destroy all Georgians.

In the early morning, heavy batteries began shelling the Teksla bunker seized by the Georgians, preparing a counterattack by German troops arriving from the mainland. Subsequent events can be called an act of retaliation. Some local residents joined the Georgians and took part in the battles. Both sides took no prisoners. Many civilians were also injured - those suspected of complicity in the mutiny were put up against the wall without trial. 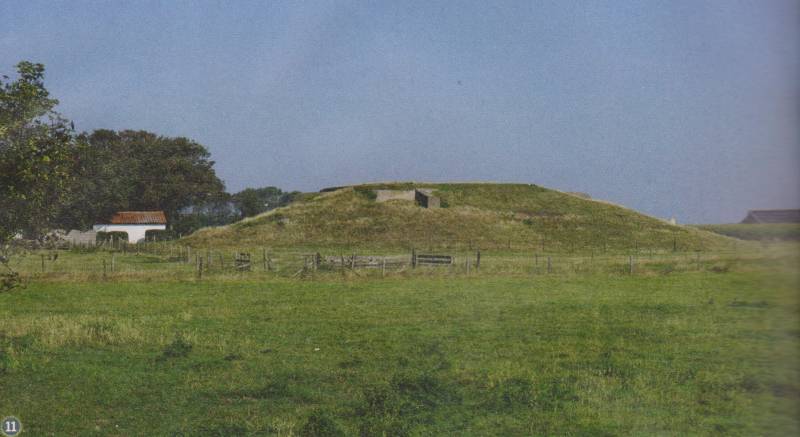 Bunker "Texla" - the operational center of the German troops on the island. Photo of 2017 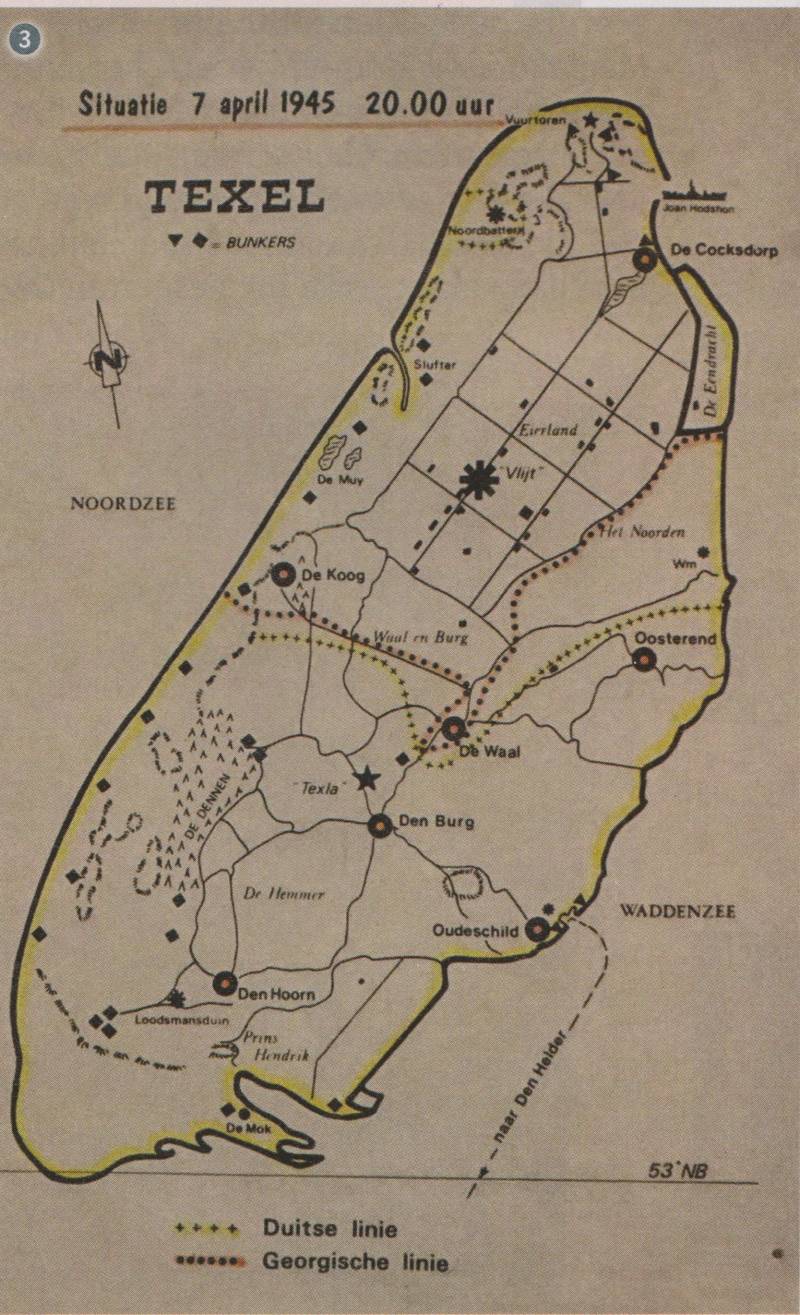 A map from a local museum shows the position of the front line by the end of the second day of the uprising
Soon after noon, Loladze and his comrades-in-arms were forced to leave the Texla bunker and retreat to Den-Burg. The Germans attempted to persuade the Georgians defending Den Burg to surrender, but the Georgian parliamentarians sent for negotiations joined their fellow countrymen. After that, the German coastal batteries of Texel, Den Helder and the nearby island of Vlieland opened fire on the city. This resulted in civilian casualties. The Georgians were forced to retreat to the north, and also leave the small port village of Oudeshild. Thus, by the end of the day on April 6, only the settlements of De-Kogg, De-Waal, De-Coxdorp, the vicinity of the Vliit airfield and the lighthouse, in close proximity to the northern coastal battery, remained under their control. This situation persisted for the next two weeks.

The Georgians, relying on well-known fortifications, switched to partisan tactics: attacking from ambushes, they inflicted significant losses on the Germans. The Germans destroyed every bunker, settlement, peasant farmstead, where they assumed the presence of insurgents. This led to more and more civilian casualties.

The Germans were pulling more and more forces and heavy weapons to the island and ultimately managed to push the Georgians into the northern part of Texel, where most of them settled in the area adjacent to the lighthouse and in it. The rest of the Georgians hid in various parts of the island, some even took refuge in minefields. Some were sheltered by local peasants, risking their own lives and the lives of their families. If hidden insurgents were found, the Germans shot those who gave them shelter, and burned the courtyards.

Ultimately, the Germans stormed the lighthouse. The Georgians who defended it committed suicide.

On 22 April, about 2000 Germans staged a raid across the island in search of the remaining Georgians. Loladze and one of his comrades hid in a ditch on one of the farms, but were betrayed by its owner and killed.

Nevertheless, the surviving rebels, especially those that found cover in the minefields, continued to fight, ambushing the Germans. This continued after the surrender of German forces in Holland on May 5, and after Germany's unconditional surrender on May 8.

Local residents were already awaiting the arrival of the allies, and skirmishes continued on the island. In the end, with their mediation, a kind of truce was established: during the day the Germans could freely move around the island, and at night the Georgians could do the same. The Allies had no time for the small island, so only on May 18 a group of Canadian officers arrived in Den Burg to negotiate surrender, and on May 20 the disarmament of German troops began. 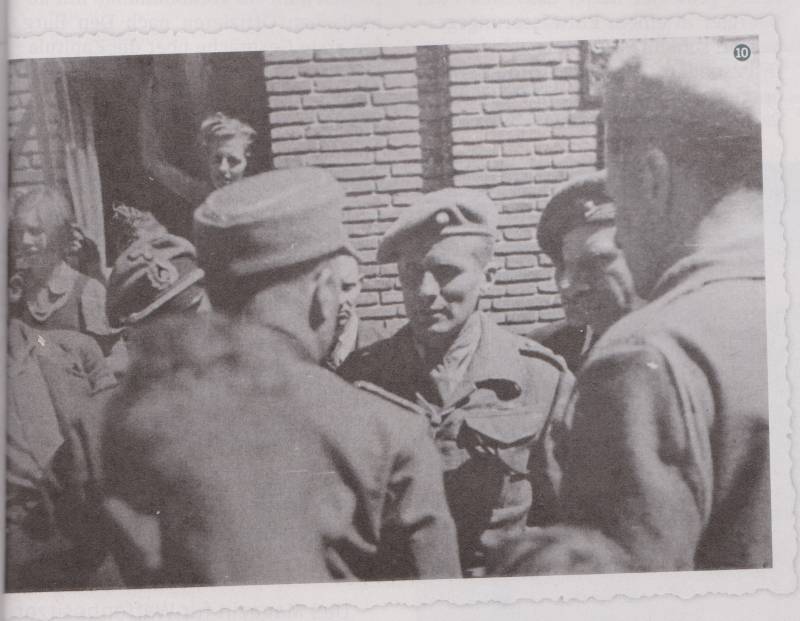 Negotiations between Canadian and German officers
In total, during the events, according to the local administration, 120 local residents and 565 Georgians were killed. Data on German casualties vary. The figures are from 800 to 2000. Currently, only the remaining fortifications, a permanent exhibition in the local museum of aviation and military stories Yes, the Georgian cemetery, named after Shalva Loladze, reminds of "the last battle on European soil."

Ctrl Enter
Noticed oshЫbku Highlight text and press. Ctrl + Enter
We are
War after Victory. Where and how did the Nazis continue to fight after 9 in MayNon-classified materials - the truth is somewhere nearby (Part of 1)
Military Reviewin Yandex News
Military Reviewin Google News
38 comments
Information
Dear reader, to leave comments on the publication, you must sign in.