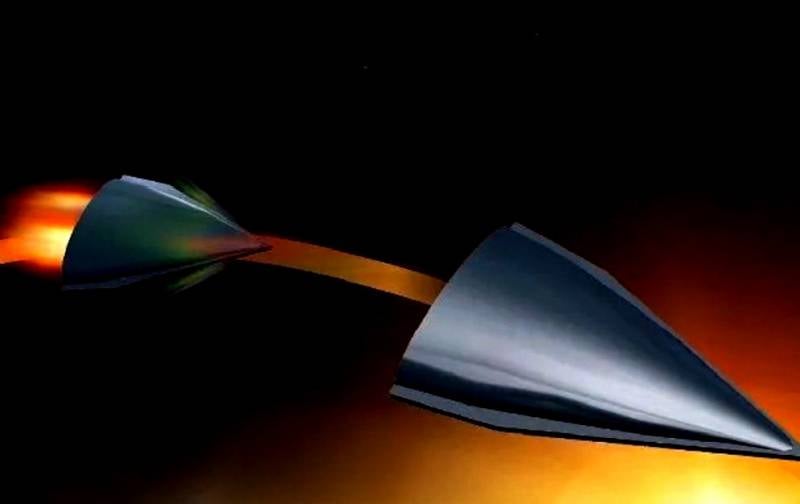 China announced the country's success in testing hypersonic cruise missiles. Meanwhile, until recently, Russia was the only country with a working prototype of a hypersonic missile.


China Central Television (CCTV) Announces Breakthrough in Hypersonic weaponsmade by the team of the Institute of Mechanics of the Chinese Academy of Sciences under the leadership of Fan Xuejun. It is still unclear how true the statements of the PRC on the development of their own hypersonic missiles are true. On the one hand, even American analysts like Douglas Barry, say that for the PRC the development of hypersonic weapons is a matter of the next few years. Moreover, Beijing does not spare efforts and resources for research in this direction.

In the fall of 2019, Sina published material describing the advantages of the DF-17 missile, demonstrated at a military parade in Beijing, over similar Russian and American developments. According to the article, the range of the rocket is 1800-2500 km, and the separation of the hypersonic glider from the rocket accelerator is carried out at an altitude of 60 km. After that, you can adjust the trajectory of the warhead, which allows you to destroy the missiles launched by enemy missile defense systems. Moreover, data on the specific speed of the hypersonic part vary significantly: from 5,5 M to 7,5.

Director of the Intelligence Directorate of the US Department of Defense, Lieutenant General Robert Ashley Jr. notes that the PRC has recently conducted more missile tests than all other countries of the world combined. Thus, it is possible that successes in creating hypersonic missiles really have a place to be. But how then can there be doubts about the realism of Chinese projects? 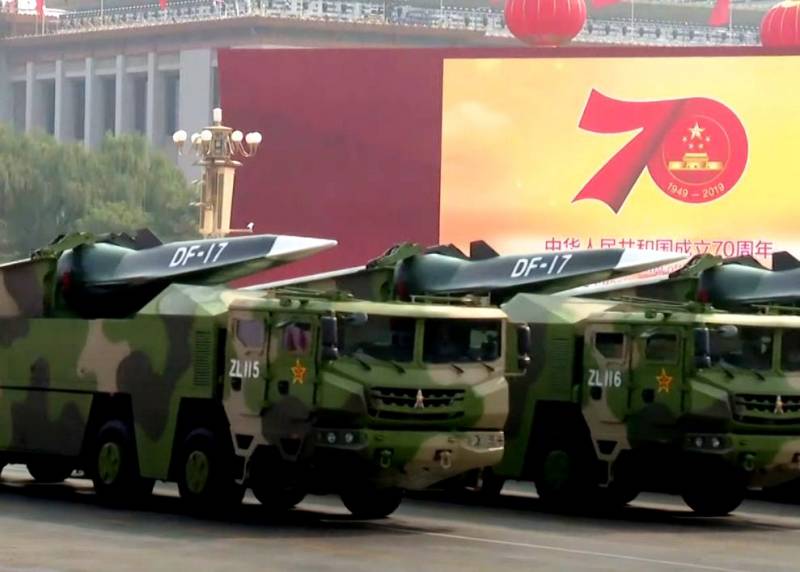 Chinese hypersonic missiles DF-17 at the parade in honor of the 70th anniversary of the PRC
It's very simple: until recently, China has been and remains one of the largest buyers of military aviation engines from the Russian Federation. This suggests that the PRC, despite obvious efforts, has not yet managed to create its own well-working aircraft engines, and the Chinese side is forced to buy them from Russia. But at the same time, Chinese engineers claim to have developed their own hypersonic rocket engine.

In January last year, specialists from the Aviation Research and Design Institute in Chengdu reported on this, in particular. The power plant proposed by them combined in one body turbojet, turbocharged ramjet and air-jet engines. Such a combined engine, according to Chinese experts, will be able to accelerate aircraft from zero speed to Mach 10.

First, when speeding up, a jet engine is used, when accelerating more than 2 Machs, it turns off and is replaced by a rocket engine, and at speeds of 4 Machs or higher, a ramjet engine is turned on. All of them operate on aviation kerosene, and the oxygen in the rocket and ramjet engines is liquid oxygen.

Thus, the Chinese project looks quite real. China should not be underestimated, even if China does not have everything “smoothly” with conventional aircraft engines. The Chinese leadership simply did not consider the latter to be particularly priority at the time, since these engines can always be purchased from neighboring Russia. A completely different topic is our own hypersonic weapons, the creation of which is so important in the framework of the strategy proclaimed by Xi Jinping to strengthen the power of the Chinese state.

China's attention to developments in the field of hypersonic weapons is not accidental. Now Beijing is hoping to "arrange" the missile defense systems deployed by the United States in the countries of the Asia-Pacific region, practically along the perimeter of its eastern borders. The success of military competition with the United States in the Pacific will depend on the success of Chinese developments. American military bases located in the region (primarily in Japan and South Korea), as well as American aircraft carriers plying in the Pacific, are the main target for hypersonic missiles, while the latter will have to bypass the US missile defense.