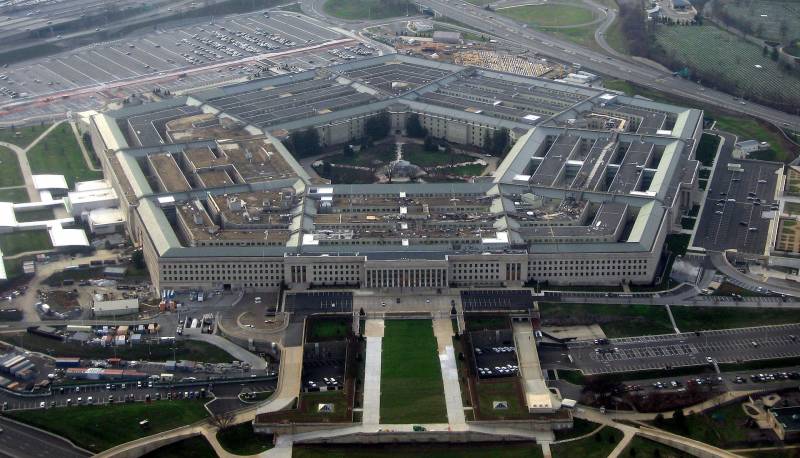 Against Russia and China

In the United States, they regard Russia as an enemy no less than the Soviet Union during the Cold War. For this, almost 24 years had to pass: in September 2014, the Americans had a long-term “Third Compensation Strategy”. The first strategy was President Eisenhower's New Look, dating from the mid-50s. According to this plan, it was necessary to pacify the nuclear weapon USSR, increasing the offensive potential of the country. The concept actually failed: neither the Soviet Union could be intimidated nor the spread of nuclear weapons was restrained. When everything calmed down with nuclear weapons and the realization of the hopelessness of further arms buildup came, the time came for the "Strategy for Compensation" by Secretary of Defense Brown. The essence of the second strategy was to create a smart high-tech weapon capable of leveling out the massive superiority of conventional arms of the USSR. Across the ocean, they strove to surpass the Soviet gunsmiths qualitatively - hence the "stealth" technology, high-precision weapons, command and control networks, and much more. It turned out better here: the Warsaw bloc, and after it the Soviet Union collapsed, which for some time reassured American militarism. By the way, for the first time in full glory, the results of the Compensation Strategy were shown to the Americans only after a significant weakening of the main enemy - in 1991 during Operation Desert Storm. A little later, this was repeated in Yugoslavia. 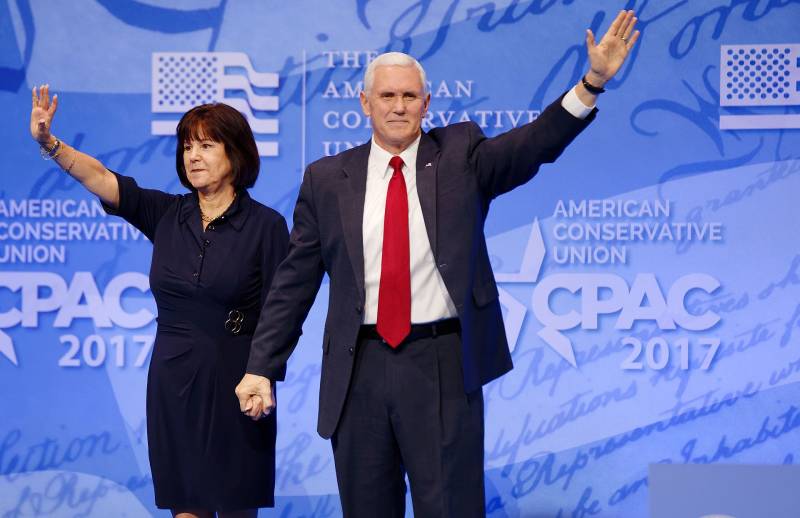 US Vice President Michael Pence. Photo: Michael Vadon wikimedia.org
Over time, it became clear that at the beginning of the XXI century you won’t surprise anyone with precision weapons and the bumpy hour of the United States may itself be hit by new "stealth" and cruise missiles. Even “backward” and “defeated” Russia quite effectively uses its “Caliber” for its intended purpose in the world theater of war. Therefore, the Pentagon theorists and practitioners have put forward a new type of world order in the scenario of the Third Compensatory Strategy. Here, once again, a bet is placed on high technologies available only to the States and partners. At the forefront are the naval forces and aviation as the trump cards of the American army, as well as a gradual decrease in dependence on advanced land and naval bases. The Americans plan to shift the confrontation with Russia and China in those areas where the country has the greatest advantages, for example, in underwater navy. This, according to the plan, should force the opponents to spend large resources on closing the gap, diverting them from other areas of armament. The Pentagon also does not forget about saving - some areas of the strategy will be implemented on the territory of the partner countries for NATO and “addiction”. Finally, the main component will be drones of various classes, united around the world by an information management network. Actually, the main burden will fall on them in neutralizing threats of a small and medium level. More serious targets will be hit by B-2, LRS-B aircraft, ballistic and hypersonic missiles launched from submarines.

The strategy, in fact, fixated on dronelessness and network-centricity, even in the US has its own critics. So, Van Jackson from the Center for New American Security believes that

“In general, this is characteristic of the military culture of the United States - to strive to build an entire strategy out of a single technology”
.
Pentagon doesn't teach история the actual failure of the first "nuclear" strategy based on a single technology. And the second strategy of qualitative superiority in the USSR was successful only because the global opponent simply disappeared from the field of confrontation. Therefore, the question of how much time the United States will be able to be a world leader in such a framework remains open. However, all this does not reject the close attention that American military toys attract.

World leader for the third time in a row

The "fog of war", or incomplete situational awareness of the nature of hostilities at all levels of government, has kept the Pentagon awake from the time of the Vietnam War. To solve this difficult task, special emphasis is placed on the information component of a new type of war, the tools of which are the military Internet of things, cloud storage, numerous unmanned robots and a space communications system. The main connecting component can be the global information network DoDIN - Departament of Defense Information Network. This is a multi-level integrated system that provides continuous exchange and processing of information in the interests of end users - from the highest military command to tactical officers. At its disposal are all Pentagon-owned and leased commercial communication channels, computers, software shells, databases, and cybersecurity tools.

Storage and processing of the received information becomes one of the primary tasks of planning the future work of the Pentagon. Here, obviously, the military came to the use of cloud technologies, which are successfully used in the civilian sector. Storage of data and software applications in this case is assumed to be on geographically dispersed and remote servers. "Cloud" storage, as you know, has a lot of advantages: not the highest requirements for software, almost unlimited amounts of stored information, a high level of security, low operating and maintenance costs, as well as high speed access from anywhere in the world. Of course, if the information storage does not have a single “think tank”, then it will not be easy to destroy it - there will always be several remote servers that duplicate the data. As part of the DoD Cloud Computing Strategy “Cloud Computing Strategy,” the US Department of Defense signed a $ 2019 billion contract with Microsoft in 10 for software development. The software received as part of the defense order will allow the US military to access information resources from anywhere in the world in real time. Last year, the Navy already transferred some of the planning tools to the cloud service - earlier they were located in single data centers. At least 64% of US Navy warships have already become users of this service.

A local project within the framework of the strategy is the MIDS program, aimed at developing a single Link 16 terminal for communication between NATO aircraft. The Air Force is tied into a separate information network by the F-22 and F-35 with the Missouri project, and the space tracking equipment and the U-2 reconnaissance are combined by the Iguana terminal.

The Pentagon’s new information structure will be ready no earlier than 2025, and it should ensure full compatibility of reconnaissance, command, communications and weapons systems at a qualitatively new level. Only then, according to the military’s idea, the “fog of war” will finally disappear and the remote interaction of the command staff, headquarters and command posts will improve.

Source: lockheedmartin.com
The Pentagon also does not forget about artificial intelligence, which, as part of the "Third Compensation Strategy", is implemented in the World Improving Conflict Early Warning Systems, W-ICEWS. In full compliance with the rule that the best fight is the one that was prevented, Lockheed Martin is creating a data collection system within W-ICEWS from news and intelligence sources around the world, which, based on more than 80 models of the development of military conflicts, assesses and predicts the military-political situation. The work algorithm is based on the analysis of about 30 million different messages: data visualization in a user-friendly format in the form of tables, maps, graphs and detailed monitoring of social networks and blogs. In the latter case, artificial intelligence monitors the reaction of various segments of the population to events of a global and regional scale that are important from its point of view. Other software is engaged in generating news texts in the interests of the Pentagon, integrating targeted advertising into social networks, that is, it is engaged in full-fledged manipulation of public consciousness. W-ICEWS monitors the reaction of users to such stuffing.

In addition, the US military integrates the beginnings of artificial intelligence in land equipment and aircraft. No, we are not talking about fully autonomous drones that independently make decisions. New systems are designed to assess the risks of failure of complex equipment based on the analysis of data from multiple sensors. So, during the tests, artificial intelligence urgently required to replace one of the Boeing engines within the next 40 hours, which was significantly ahead of the time between failures. They believed the “smart” algorithm, dismantled the engine and found damage to the turbine blade, which could lead to a serious accident. They say they saved a total of $ 50 million. 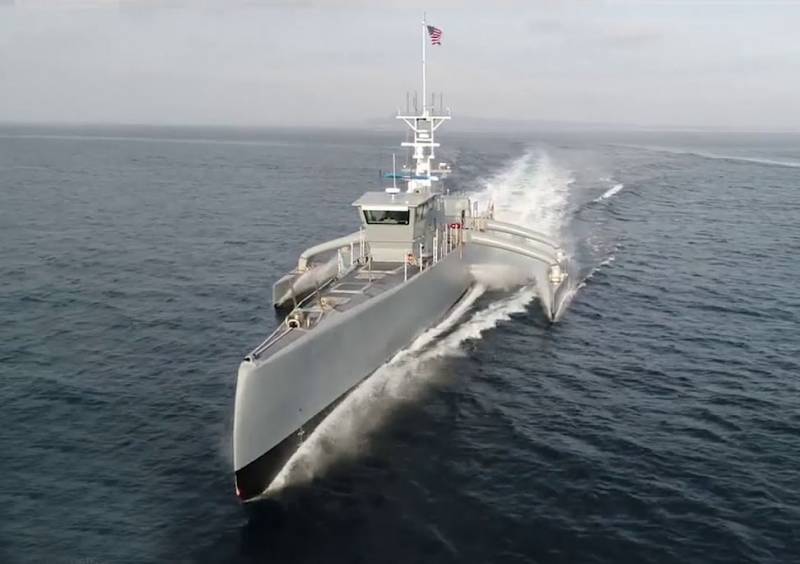 Sea Hunter. Source: naukatehnika.com
With the help of artificial intelligence, the Pentagon also intends to master the management of swarms of unmanned ships and aircraft. In 2016, the fleet completed trials of coast guard boats, which independently learned to patrol a 16-square-meter square. miles in the Chesapeake Bay and intercept intruders. By the way, it is with the Navy that the Americans have great hopes for the full implementation of the "Third Strategy."

Three years ago, the Pentagon adopted the concept of Ghost Fleet ("Ghost Fleet"), which should saturate the US Navy synchronously operating on water, under water and above water, drones. Large and medium floating shock drones will be dispersed throughout the entire water area of ​​the fighting, while being in constant interaction with the entire military infrastructure. As a result, it will be much more difficult for the enemy to find a suitable target for the first disarming strike - now American aircraft carrier groups are well suited for this. In addition, drones will be the first victims in the wars of the future - it is this technique that the fleet will push to the forefront. The first signs were surface hunters Sea Hunter, adopted by the U.S. Navy. They are capable of 70-day autonomous transitions with a range of up to 19 thousand kilometers at an average speed of 12 knots. Under the water, over time they plan to produce a 50-meter submarine XLUUV - Extra Large Unmanned Vehicle, or Orca (Killer Whale), which in the amount of 4 copies has already been ordered from Boeing. This is a multifunctional crewless submarine, capable of carrying up to 12 torpedoes and almost independently navigate the ocean. The range of the campaign will be more than 12 thousand kilometers. A group of such "Killer Whales" in conjunction with a swarm of Sea Hunter should, according to Pentagon analysts, completely nullify the stealth of the Russian submarine fleet.

Unmanned submarine Orca. Source: naukatehnika.com
The “Third Compensation Strategy”, of course, is not fully described within the framework of this material - the Americans have started and are implementing a large-scale and interesting program to maintain their own world leadership. This, of course, should find a response in the military departments of Russia and China as potential goals of the third "American military revolution."

Ctrl Enter
Noticed oshЫbku Highlight text and press. Ctrl + Enter
We are
Strangulation: the context, conduct and consequences of the American naval blockade of ChinaShield and sword
Military Reviewin Yandex News
Military Reviewin Google News
50 comments
Information
Dear reader, to leave comments on the publication, you must sign in.