Vasily Botylev. Calling fire on myself!

First part: Vasily Botylev. On the way to the legend.


According to the German historian and former SS Obersturmbannführer Paul Karel, on February 9, 1943, Adolf Hitler in his Wolfschants headquarters proceeded with bile. He gave an extremely clear order: "The Russians should be dumped into the sea." The Fuhrer was not interested in any nuances, he did not accept any excuses, the idea that a few hundred marines had expanded the bridgehead for a whole division and sent away the dream of using the Novorossiysk port into oblivion did not fit into the head of a recent grief artist and former corporal.

On Small Earth brought down Aviation, armored vehicles and numerous infantry units. Even the battle-hardened mountain shooters of the 4th mining infantry division, in which immigrants from Swabia and Bavaria, tried to break through the defenses of the villagers. The fights were almost round the clock. But the most terrible blow to the villagers was the news that Major Kunikov was seriously wounded. For a long time, in conditions of such a wound, the commander’s time could not be evacuated due to the density of fire, which frustrated even the attempt to moor near the shore. But the evacuation could not save Kunikov. February 14, 1943 the heart of Caesar Lvovich stopped. 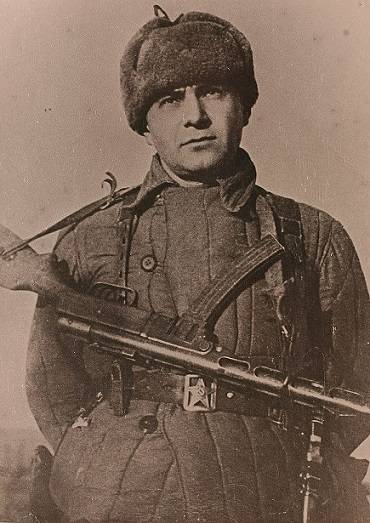 Caesar Kunikov
The landing party lost its commander. The eyes of officers and marines involuntarily rushed to the senior lieutenant Vasily Botylev. The 22-year-old officer actually took command of all the landing forces. As a result, he played one of the most important roles in the defense and retention of the bridgehead, which is difficult to overestimate. Botylev met his 23rd birthday to the accompaniment of the cannonade shaking from close tears of land and the rumble of gunfire.


At the end of March 1943, the entire Kunikovo detachment, headed by Botylyov, was evacuated from Malaya Zemlya for rest and reformation, because after almost two months of continuous fighting, the Kunikovites were at the limit of human capabilities. Gelendzhik, once a resort, met the paratroopers as a hospital city.

April 20, after the detachment was replenished with people, Vasily Botylev was appointed commander. By this time he was awarded the rank of captain-lieutenant. The detachment was assigned a new combat mission - to properly provide the bridgehead troops with ammunition, food and other cargoes. The economic function in the conditions of constant bombardment and deadly waters of the Black Sea became a daily battle for each box of ammunition, for each bag of provisions. 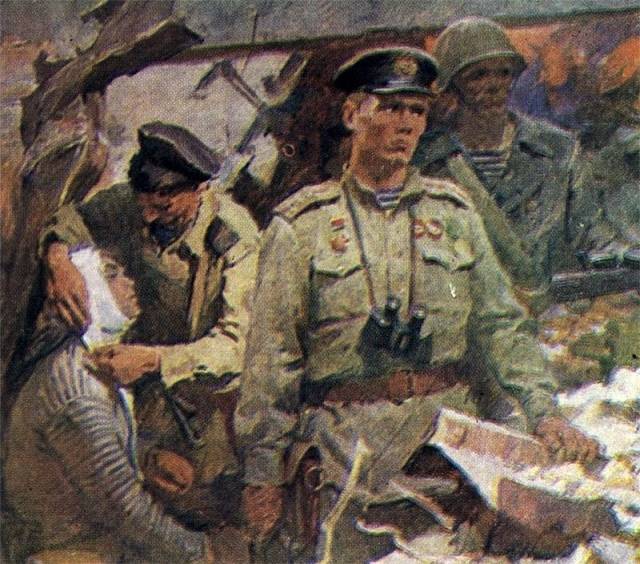 Vasily Botylev. Painting by Nikolai Bout
On August 15, Botyleva and his detachment, which continued to bear the unofficial name of Kunikov, were suddenly removed from the mission and evacuated to the rear. The very next day, fighters of the 143th and 325th Marine Corps battalions began to be transferred to the detachment. Thus, the detachment was reorganized and was now called the 393rd separate battalion of the marine corps. The command appointed Captain-Lieutenant Vasily Botylev the commander of the new formation.

Even then, it was clear that a separate battalion of marines was waiting for the next landing as part of a major offensive. According to the memoirs of Georgy Kholostyakov, the first conversations about a new landing operation in practical terms began with him fleet Admiral Vladimirsky in the middle of the summer of 1943. Therefore, Botylev, in the best traditions of Major Kunikov, began training personnel. And if ice water, Nord-ost and cold were previously one of the landing’s enemies, now the fighters were languishing from the August heat, which by noon exceeds 35 degrees in conditions of high humidity and a constant shortage of drinking water.

At the end of August, officers of the 393th Obligatory Naval Forces were called by the command of the Novorossiysk Naval Base. Since regular infantry units without such experience took part in the assault landing, the 393rd were ordered to send 20 experienced fighters so that they could share at least a fraction of their training in less than two weeks.

Botylev continued to train the fighters, and soon the headquarters of the NSAF informed the commanders of the airborne units the specific coordinates of the landing sites, which only the fleet commander, the head of the base and the headquarters knew before. They planned to make the landing directly on the territory of the port. At the same time, the landowners and infantry, who held the defense at cement plants, went on the offensive simultaneously with the paratroopers. But this did not facilitate the task at all, and Vasily Andreevich knew this very well, as he knew what forces the Germans concentrated.

Here is what Admiral Kholostyakov writes about German defense in his memoirs:

“For a year the Nazis solidified in Novorossiysk. In the port, on the embankment, on the beaches, enemy defense begins from the very edge of the water: machine-gun pillboxes on jetties and marinas, barbed wire, mines ... And then - thick-walled stone buildings turned into strongholds, guns in the lower floors, lines of engineering barriers . Port approaches and the internal raid were shot by dozens of artillery batteries.

Two enemy divisions defend the city directly, and special teams defend the port. The 73rd Infantry Division, staffed by the Bavarians, is considered one of the best in the German army. She stormed Perekop, Kerch and Sevastopol. "

Modern Novorossiysk port, view from the Markotkh mountain range
It was here that the Blue Line defensive began. Nikolai Starshinov, then political officer of 393 OBMP, later recalled that, in addition to the two divisions defending the city, there were two marines and several apparently special mobile port units armed with “the latest technology of the time” in the port.

Storming at any cost

At 2:30 a.m. on September 10, 1943, torpedo boats of the breakout group were able to break through the entrance to the bay, breaking the German net barriers and destroying up to 20 pillboxes and bunkers. The Germans, rushing into the pro-ships, were desperately shooting both with artillery fire from long distances and machine-gun from fortified points right on the shore. Some of the ships, barely having time to land the fighters, went to the bottom right at the piers.

Botylev immediately created a tiny bridgehead at the oil pier, however, much larger than that of the neighbors. Apparently, a lot of experience affected. The entire coast was dotted with minefields and pulled by wire fences. The fighters had to spend very valuable anti-tank grenades in order to quickly make passes.

Developing the offensive, Botylev’s battalion started a battle for the railway station and the nearby infrastructure in the form of a clubhouse, freight station, and more. Soon they were all occupied by our marines. However, to go further there were neither resources nor fighters - the marines took up a circular defense. The first attempt to storm the headquarters of the German Marines, located in the building of the Novorossiysk port administration, failed. The building was turned into a fortress.

Botylev occupied the building of the club for sailors adjacent to the port authority. Starshinov recalled how the young captain grinned:

“The paradox of wartime. The two headquarters of the warring parties settled almost nearby. Moreover, both belong to the Marine Corps. ”

The enemy promptly pulled armored vehicles to the landing site and rushed to throw off the marines to Tsemess Bay. After several hours of battle, there was a shortage of ammunition, and the development of the offensive from the Malaya Zemlya and the eastern side of the bay also faced fierce resistance from the enemy, deeply entrenched in their positions.

At this time, Botylev defended himself with all his might. Here is how the aforementioned Starshinov described those moments:

“Some of the wounded, able to move at least crawling, also moved to the windows and, as far as possible, shot the Nazis. The rest lay on the floor, powerless to help their comrades with anything. One Red Navy man, with both legs torn above his knees, inserted ammunition into his machine gun with trembling hands. He could not remain indifferent to what was happening.

In addition to anti-tank rifles and grenades, the paratroopers had no argument against German armor. Even the major of the medical service 393 OBMP Peter Laptev was forced to save soldiers from wounds only after he squeezed the entire disk on the enemy. The situation worsened every hour. From a distance of 200 meters, several German self-propelled guns shot the clubhouse. Sometimes the Nazis even managed to break into the building itself, and a fleeting hand-to-hand fight broke out on the ground floor.

The forces of the battalion were melting before our eyes. Vasily Andreevich, assessing the situation, called artillery fire on his positions, saying that "of the two deaths, the most honorable should be chosen." Shells rained down ... For five days, Botylev’s fighters held back the enemy’s onslaught. At night, they managed to make sorties - the scouts slaughtered the German marines even in their headquarters building. But in the afternoon, with the support of armored vehicles, our fighters were again besieged. Botylev had to call fire on himself again and again, which ultimately became commonplace. 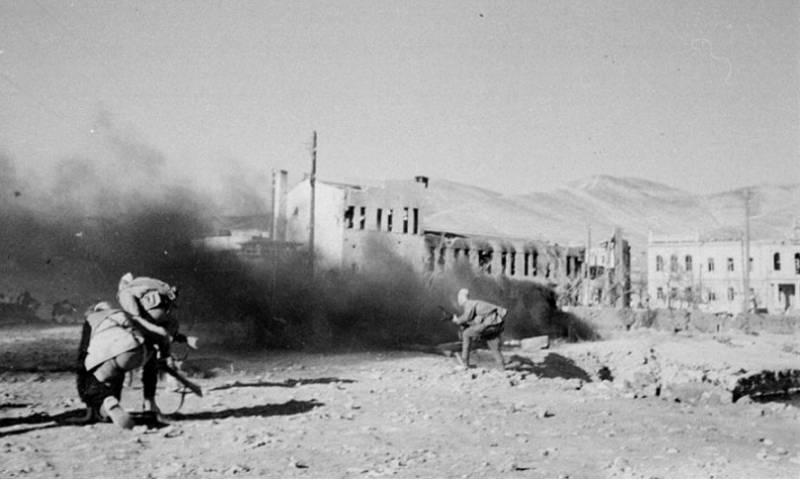 Truly a born sniper Philip Rubajo from the assault detachment of Botylev more than once saved the situation with marksmanship. But on September 14, the shell that exploded next to the sniper, heavily cut out the fighter's legs. The Marines had to carry Rubajo on a raincoat, who continued to fire from his rifle, which seemed to be related. On September 15, another shell turned the wall at Rubajo’s position. Philip was seriously injured in the head. Recovering, he managed to throw only: "It seems he shot himself." Rubakho, the sniper legend of Novorossiysk, equivalent to Zaitsev Stalingrad, died on the same day.

By September 15th, Botylev’s battalion consisted of disparate detachments desperately defending occupied buildings and periodically, taking advantage of the darkness, capturing the neighboring ones. It was unusually difficult to control such a battle, but Botylev succeeded, therefore, not a single building occupied by our marines passed into the hands of the Germans.

It was very vividly described by Starshinov:

“But perhaps the main difficulty was that we did not have a single line of defense, constant stable communication with disparate, independent combat operations units. Enemies tried to take advantage of this. They continuously launched attack after attack, put into action Tanks, self-propelled guns, field artillery and mortars ...

We rarely shot, but for sure. Occasionally grenades flew. They were thrown only by the accumulation of the Nazis, and then at the most tense moments. And only one view weapons paratroopers used without limitation - daggers. They went on the move whenever the enemy approached a distance convenient for hand-to-hand combat. Then the Black Sea people jumped out of their hiding places and selflessly entered into combat with the Nazis, without thinking about whether there were a lot of them or not. ”


Only by the end of September 15 there was a chance to unite with the troops of the 55th Guards Rifle Division, advancing on the eastern side of the Tsemess Bay.

We are in Yandex Zen
Vasily Botylev. On the way to the legend
Maria Pedenko. Red flame of war
22 comments
Information
Dear reader, to leave comments on the publication, you must to register.