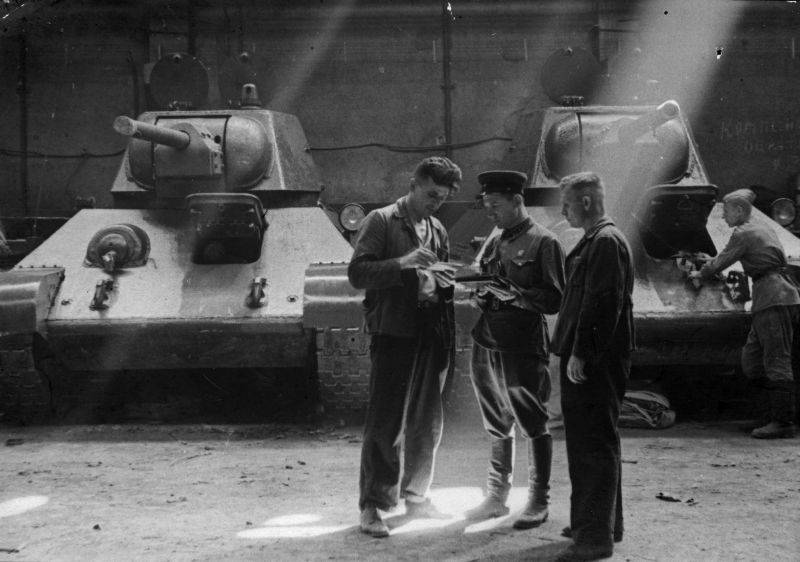 Acceptance tanks T-34, off the assembly line of the plant number 183 in Nizhny Tagil. Source: waralbum.ru

All to war with a crack!

The high-solid homogeneous 8C armored steel, which became the main one for the T-34 medium tank, brought a lot of difficulties to the production process. It should be noted that such solid armor during the entire Second World War on tanks was used only in the Soviet Union. And in this, of course, there were both positive and negative sides. In previous parts The cycle already referred to the numerous cracks accompanying the welding of hulls and towers of medium Soviet tanks. At the same time, heavy HF and then ISs were deprived of this: more plastic armor of medium hardness was much easier to tolerate excessive stresses when welding parts. Since the beginning of 1942, engineers at the Armored Institute have proposed a set of measures to simplify the production of armored vehicles and modernize welding technology. It was decided not to weld some knots at all: for example, the fastening of the rear and front frames was transferred to a rivet. In many ways, this was a borrowing after a thorough study of German armored vehicles. 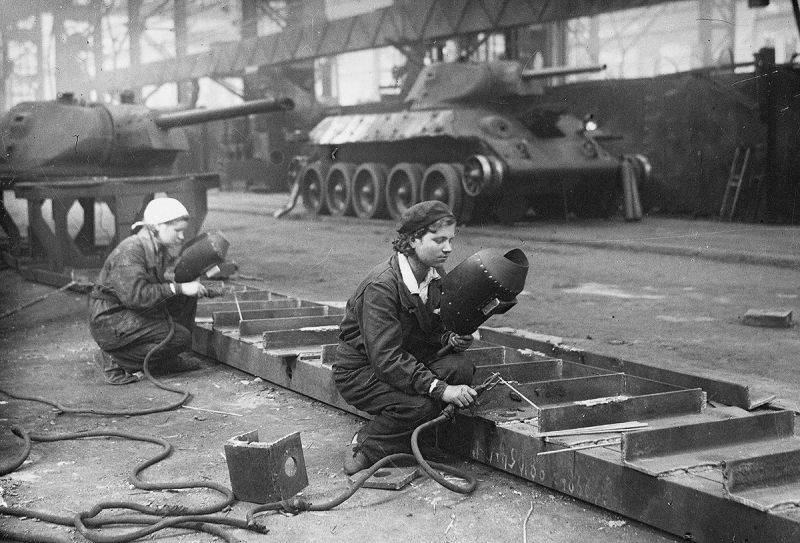 Female welders at work at the Ural Tank Plant in the assembly shop of T-34 tanks. Source: waralbum.ru
The frontal and side parts of the tank were now welded at the request of TsNII-48 only with austenitic electrodes, better suited for difficult to weld ferrous metal grades. In total, now up to 10% (or more) of all electrodes consumed by an armored vehicle were austenitic. If we focus on the data provided in Nikita Melnikov’s book “Tank Industry of the USSR during the Great Patriotic War”, then about 34 electrodes were spent on one T-76-400, and 55 of them were austenitic. Among the requirements for the use of such electrodes was a ban on their operation at high current modes - up to 320A. Exceeding this indicator threatened high heating of the weld area with subsequent deformation during cooling and cracking. Please note that functions similar to the domestic “Armored Institute” in Germany were performed by the 6th Department of the Arms Directorate of the Ground Forces. It was to him that the tank factories were to submit methods of welding hulls and towers for approval in writing. Specialists of the 6th Department, in turn, checked the submitted materials for compliance with the temporary specifications for welding armor TL4014, TL4028 and TL4032. These requirements were designed for welding German armor with a thickness of 16 to 80 mm. As already mentioned in the material “Welding Tank Armor: The German Experience”, Germany did not use automatic welding. This, of course, seriously slowed down the speed of the German tank industry, but in the Soviet Union there were some problems with welding machines. Along with the unquestionable high quality of the weld, automation of welding required high-quality filler materials and strict adherence to work technology. However, it was an inevitable fee to introduce a revolutionary method of production, which had such a significant impact on the quality and speed of assembly of tanks. 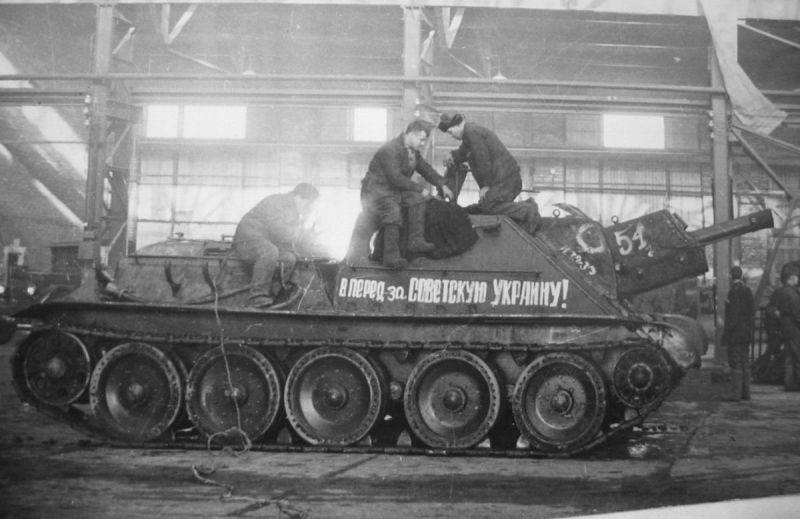 Workers of the Sverdlovsk plant for the assembly of self-propelled guns SU-122. Source: waralbum.ru 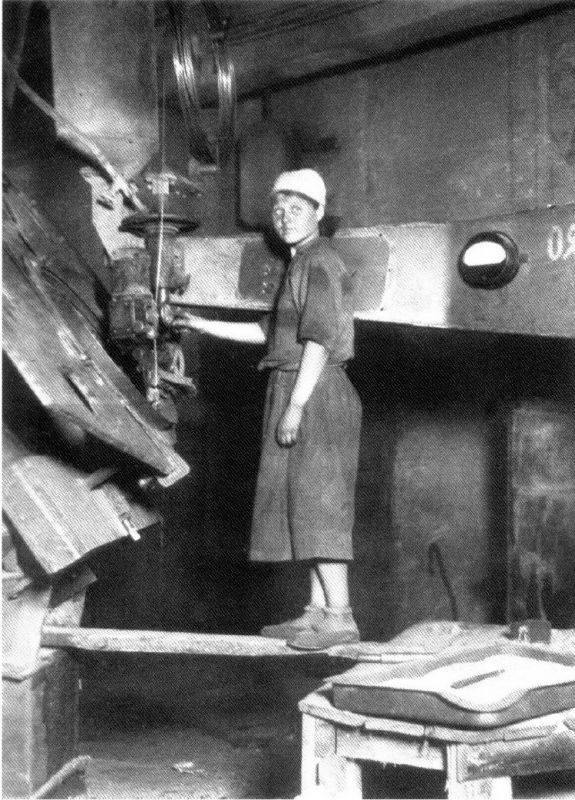 Welding the commander’s turret to the roof of the T-34-85 tank tower with an automatic welding installation at the Ural Tank Plant No. 183 in Nizhny Tagil. Source: waralbum.ru 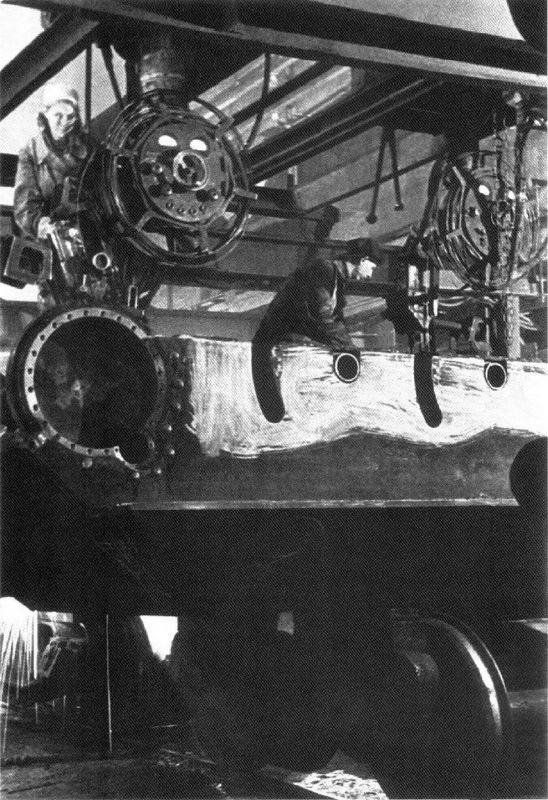 Welding the hull of the T-34 tank with an automatic welding installation at the Ural Tank Plant No. 183 in Nizhny Tagil. Source: waralbum.ru
If the main electrode and filler wire were excessively contaminated with sulfur, carbon and phosphorus (or, conversely, it lacked manganese or manganese oxide), this led to the formation of cracks directly in the weld. It was important to carefully prepare the welded items under flux. The requirements were strict: parts must be of the correct size, without violating tolerances. Otherwise, for welding, the part on the slipway had to be “pulled”, thereby creating serious internal stresses. Yes, and a simple non-compliance with the strength and voltage of the welding current led to defective joints: porosity, nostrematurity and lack of penetration. Given the low level of qualification of workers allowed in automatic welding machines, it is easy to believe in the possibility of marriage of this kind. All highly qualified welders were engaged in manual welding and could not influence the quality of welding of "Paton machines". Although they were involved in correcting defects in welding machines. 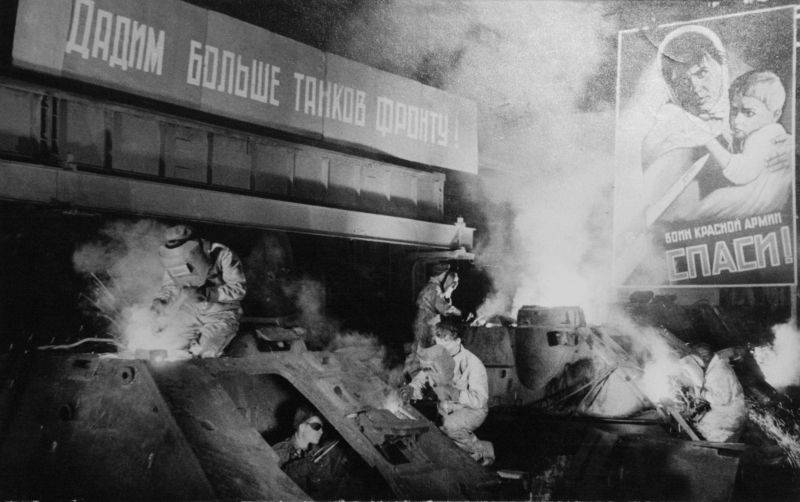 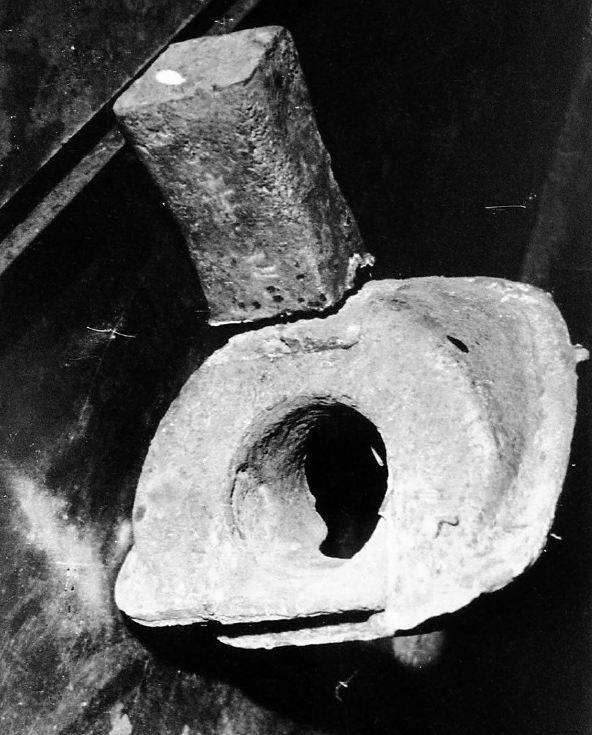 Cast part of body armor of the DT course machine gun. Plant number 183, 1942. Source: Russian State Archive of Economics
The sharp increase in the productivity of tank factories led to one unexpected problem by 1943. It turned out that the rest of the production was not always in time for tank construction. The machines worked for wear, sometimes there were no ammeters to control the current strength on the machines, lacked high-quality welding electrodes. All this caused periodic “bursts” of crack formation among the production T-34s. To extinguish these waves of marriage had the operational forces of factory technologists and engineers from the Central Research Institute-48.

The hard armor and cracks in it forced the engineers to change not only the technology of automatic welding, but also the manual approach. Large welding and thermal stresses, in particular, were experienced by the upper frontal part, when during it the conveyor assembly was welded onto it with the protection of the DT machine gun, eyebrows, the driver’s hinge, the safety bar and other little things. Around the protection of the machine gun, which was very carefully scalded, cracks often arose up to 600 mm long! Volume welding was in the area of ​​the bow nose, where they were fastened with powerful bilateral seams with frontal upper and lower plates, as well as with sloth brackets. Often the gap between the parts in these parts did not meet the normative and therefore had to put a particularly massive welding seam, leaving behind serious internal stresses. It was necessary to reduce the stiffness of some nodes and reduce the total share of welding in the joints, which was done by the TsNII-48 specialists in the shortest possible time. In particular, they changed the method of connecting the wing flaps with the front part of the hull roof. Using a special "buffer" strip of mild steel, which was previously welded to the wing liner, it was possible to reduce the level of the final voltage inside the seam and armor around. Then we dealt with the mentioned “infrastructure” on the frontal plate of the tank. Now weld the eyebolts, machine gun protection and hatch hinges under the new specifications could only 5-6 mm electrodes in several layers: at least four! Lockers with a roof, a windshield with sides, lockers and a roof were connected in a similar way. Everything else was cooked in 2-3 runs with 7-10 mm electrodes. 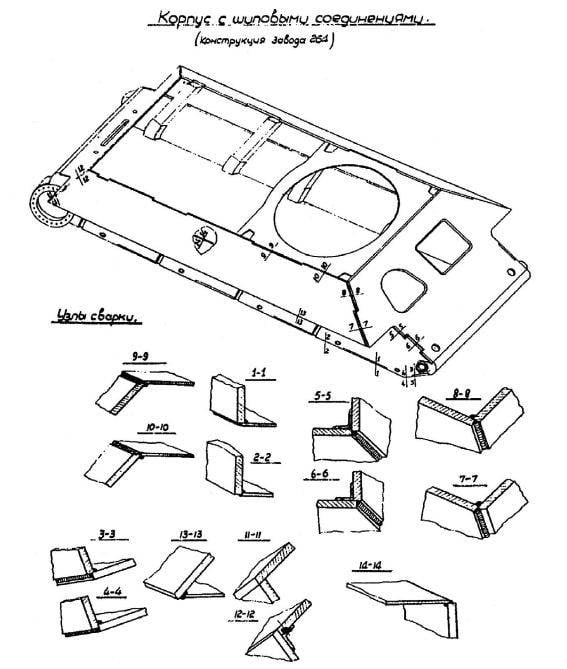 Source: Russian State Archive of Economics
Changed and the technology of the connection parts of the hull of the T-34. Initially, all the connections, except for the conjugation of the VLD and NLD, were as in the drawings made in a quarter. But shortly after the outbreak of the war, they were changed to a spike, but it did not justify itself - too many cracks appeared in the places where the seams were cut. The stud-like connection for high-hard armor was not entirely appropriate also due to the strong local shrinkage stresses after welding. What was good with plastic German armor was not suitable for domestic T-34s. Only in 1943 did the final articulation versions appear on the Victory Tank, satisfying the TsNII-48 specialists - lap-back and back-to-back. 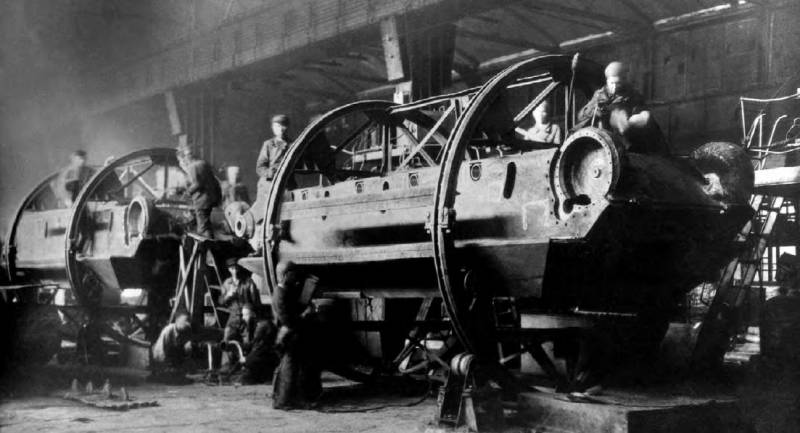 Tank corps on the tilter. Source: Russian State Archive of Economics
The easiest processes for optimizing welding operations were hulls of heavy Soviet tanks. The quarter armor plate connection on the HF was left unchanged, but the internal reinforcement squares were replaced by internal fillet welds. Already at the very height of the war, the most optimal configurations for pairing armored plates were chosen for heavy tanks (by shelling, first of all). If the connection angle was close to 90 degrees, then it would be better to use the “spike” method or a quarter, and in all other options - completely or in the tooth. According to the results of these studies, a unique shape of the upper part of the bow assembly of the IS-48 tank was born at TsNII-2, when at a thickness of 100-110 mm the armor provided all-angle protection against 88-105 mm shells. Pairing the parts in this sturdy construction was simple, by surprise.

Ctrl Enter
Noticed a mistake Highlight text and press. Ctrl + Enter
We are
Victory Technologies: Automatic Welding of Tank CorpsMemories veteran KB-60M
57 comments
Information
Dear reader, to leave comments on the publication, you must to register.