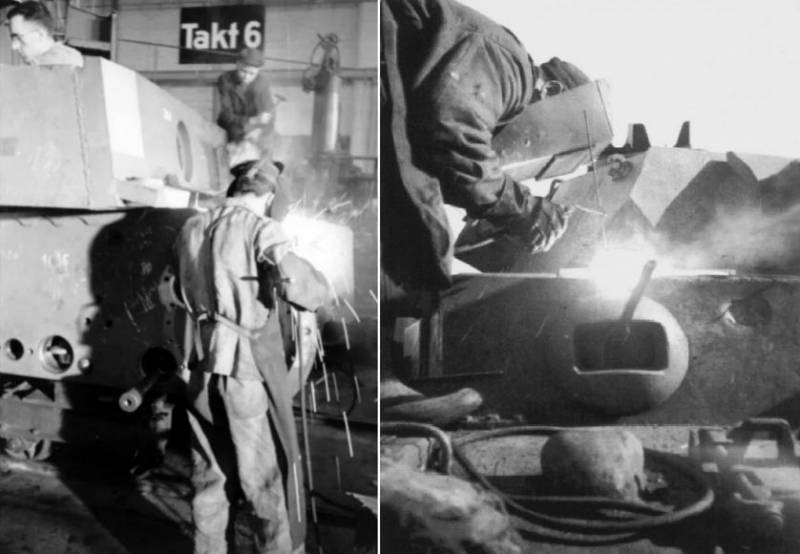 In the first part of the material It was mentioned about welding technologies during the Great Patriotic War that one of the main achievements of Soviet technologists and scientists was the introduction of welding automation tank buildings and towers. In Nazi Germany, automatic welding was not used in tank factories. There was one very important explanation for this - during the main period of the war, the tank industry of the Third Reich did not experience a shortage of highly qualified labor, including welders. And in the Soviet Union, during the evacuation of large enterprises to the east, personnel valuable for the industry were lost, which jeopardized not only the quality of tank assembly, but even the very possibility of production. In Germany, it came to the point that when welding the hulls of "Panthers" and "Tigers" individual welders were assigned to separate seams! Engineer V.V. Ardentov writes about this in the material "German experience in cutting armor and welding of tank hulls" in the "Bulletin of the tank industry" in the victorious 1945 year. His work was based on the study of two armored hull factories in Kirchmeser and Brandenburg. Obviously, these factories could afford such technological luxury in the form of separate welders for separate seams until the last months of the war. 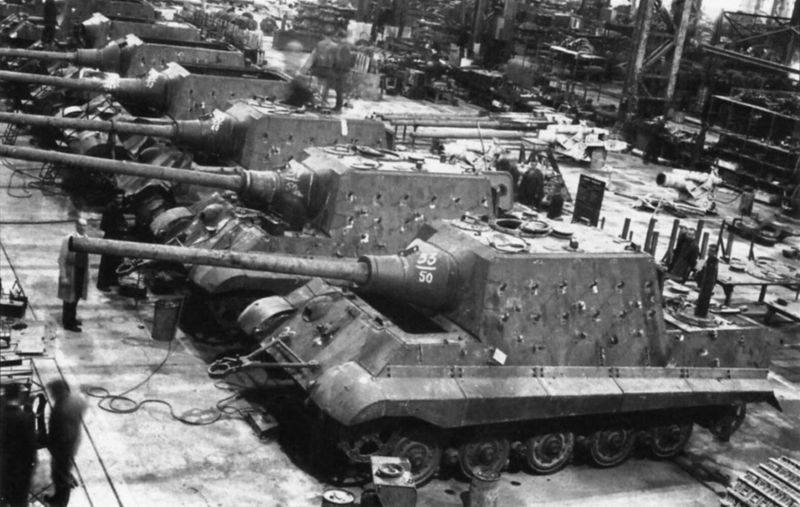 Jagdtigr tank destroyers in the assembly shop of the Nibelungenwerke factory. Source: waralbum.ru
Before welding the hulls, the armor plates were cut, which until 1942 was carried out mechanically. To cut the armor plates for the "thorn into thorn" connections it was much more convenient to use oxygen acetylene cutting, which was also used in similar situations in the Soviet tank industry. Here the Germans were ahead of our tank builders both in efficiency and as a cut. This was largely the result of the use of high-quality tools (gas cutting machines Messer and Griesheim) with the ability to fine-tune the thickness of the armor plate. The Germans also used highly purified oxygen — more than 99%. Finally, during the cutting of the armor, the Germans used several burners, including for chamfering. The gas cutting process itself was automated - this allowed us to speed up the process and make it much more accurate. 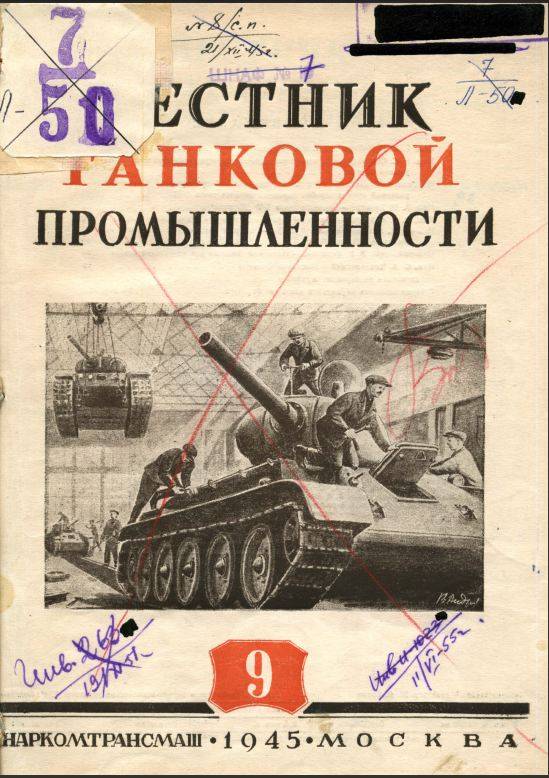 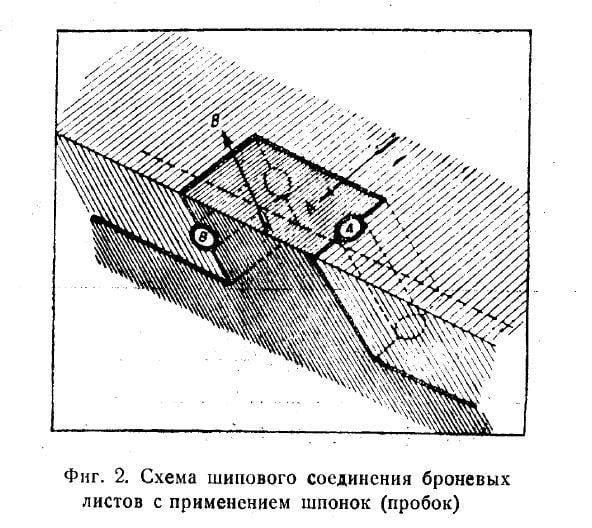 Source: Bulletin of the tank industry 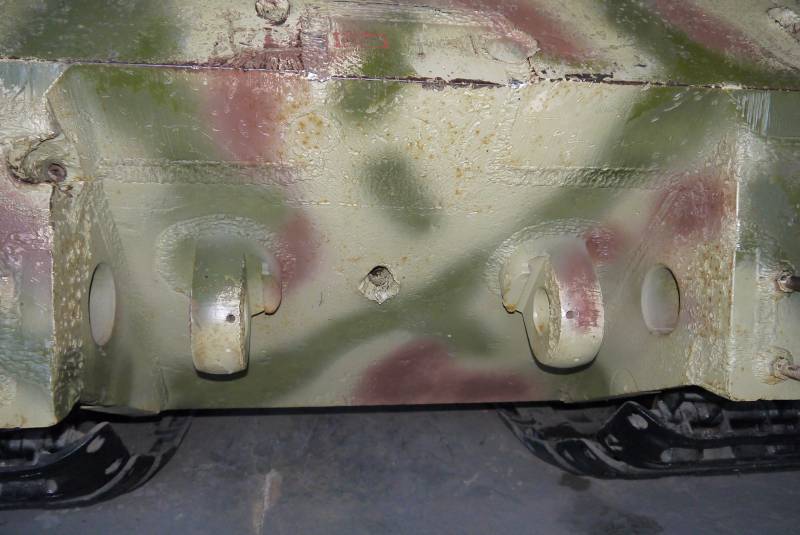 [Center]In this image, it is clearly visible where in the thorn connection of the armor there were cylindrical keys. The articulation of the upper and lower frontal parts of the Mouse. Cuban. Author photo 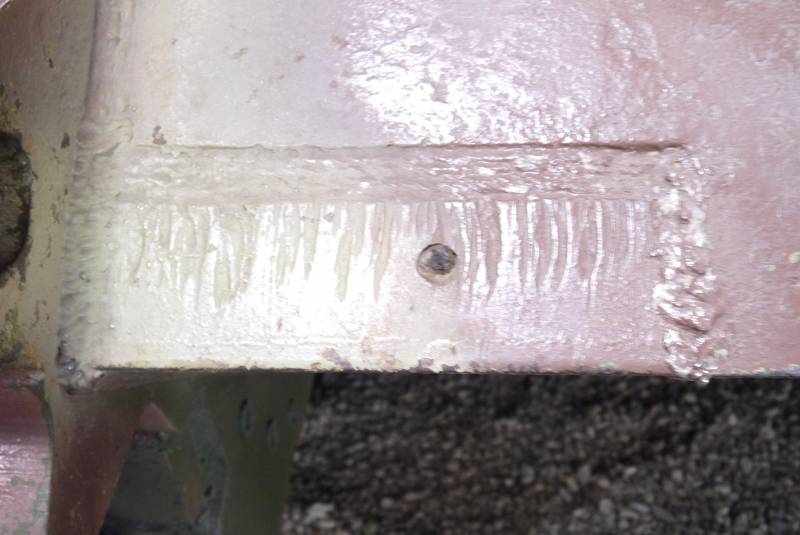 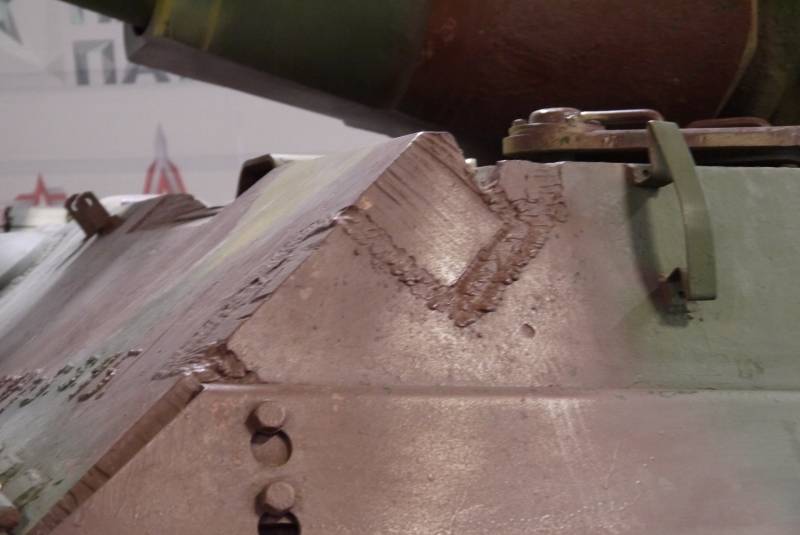 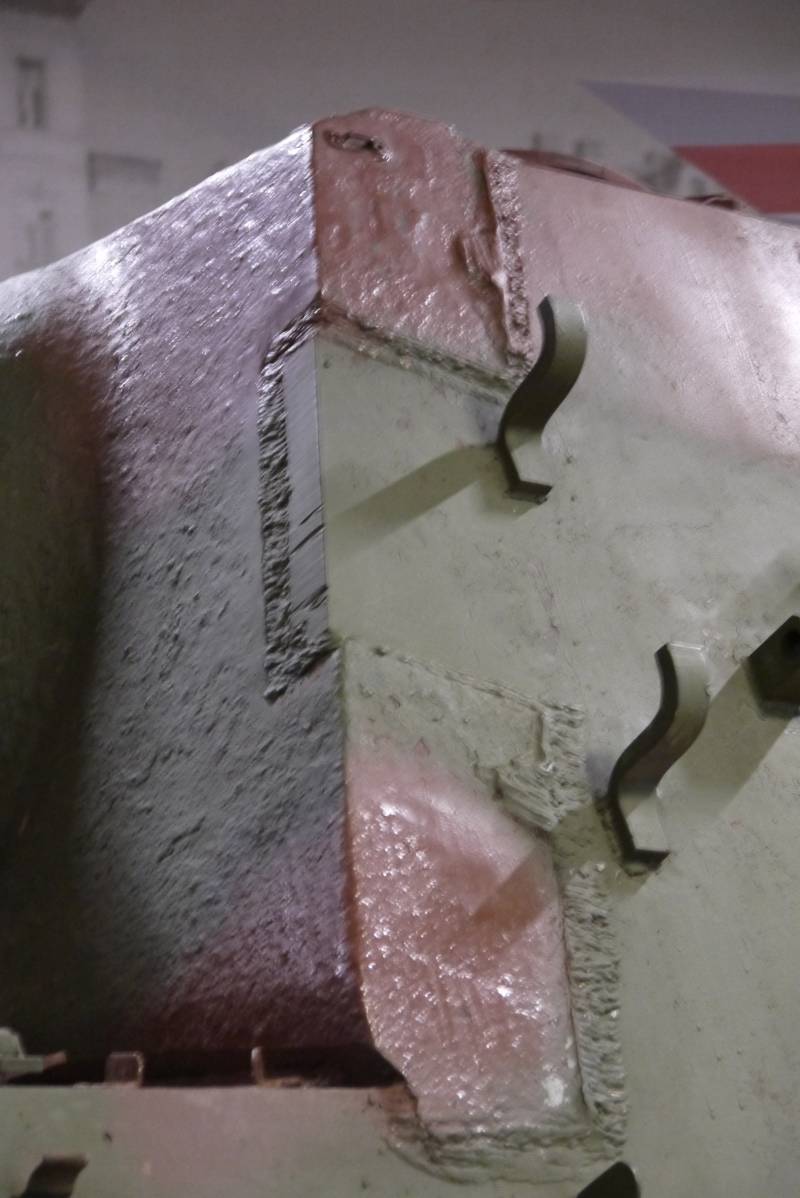 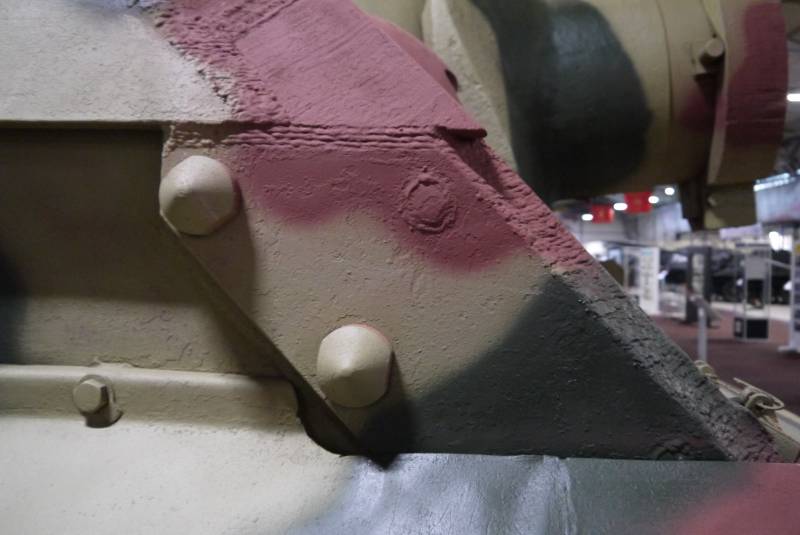 [/ Center]
Samples of welded joints in the Nazi menagerie. Photo by the author.
As you know, one of the hallmarks of the corps of German tanks since 1942 was the spike connection of armored plates with a rectangular or oblique spike. At the same time, the Germans were not limited to simple articulation - in addition, for strength, cylindrical dowels or corks were introduced into the joints. In particular, this was common on Panther medium tanks, Ferdinand self-propelled guns, heavy Tigers towers and a few Mouse bodies. Such plugs were steel rollers with a diameter of up to 80 mm inserted into the joints of the joined sheets after assembly for welding. Corks were placed in the plane of the facets of the spike of the armor plates — a pair was required for each joint. In fact, after the installation of the dowels, the stud connection became integral even before welding. In this case, the dowels were mounted flush with the surface with the armor and boiled around the perimeter of the base. The spike connection of the armored plates of the tank corps markedly improved the ballistic protection of both welds and armor. First of all, this was ensured by increasing the total length of the seam, consisting of separate segments, which somewhat reduced the propagation of cracks. 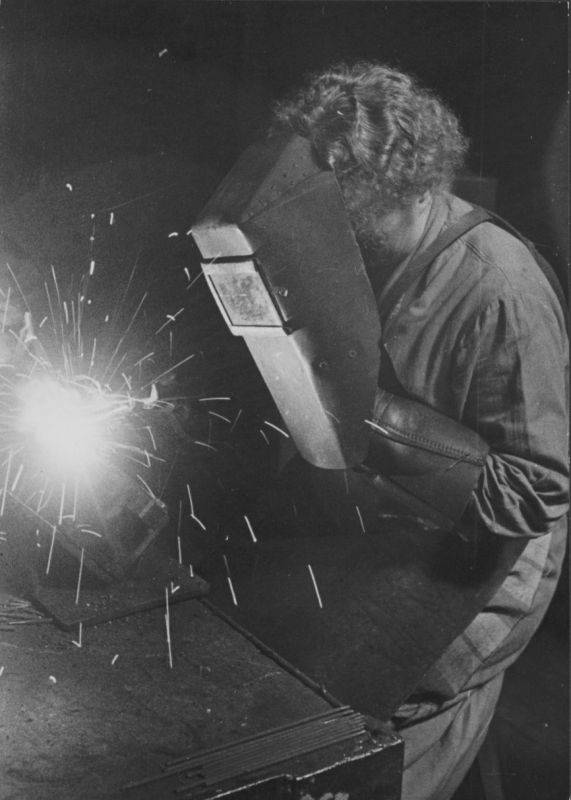 German welder at work. Source: waralbum.ru
One of the problems in the manufacture of hulls of German tanks was the manufacture of cutouts and holes (for example, under the dowels of the armor joints mentioned above). It was impossible to cut them with gas, so drilling was used. Initially, for steels of grades E-18 and E-19 that underwent surface hardening, it was generally impossible to find a suitable drill, the outer layer of armor was so hard. In the case of drilling a hole prior to hardening, an uneven hardening with subsequent deformation and radial cracking formed in the region of the hole. Yes, there were cracks on the German tanks, and considerable ones, and German efforts to avoid them will be discussed ahead. Partially, the problem of uneven hardening of the armor in the vicinity of the holes was solved by a special refractory paste, which was coated with holes before being sent to the furnace. But, I repeat, this solved the problem only partially. Only at the end of 1944 at the Electrothermal Institute in Essen was this problem solved by the local tempering procedure of the hardened area of ​​armor. The unit, developed by the Germans, is described in its article by the Stalin Prize laureate, candidate of technical sciences A. A. Shmykov. The material was published in the secret for its time and familiar to us profile publication "Bulletin of the tank industry" at the end of 1945. In the postwar years, the pages of the Bulletin were rich in a detailed analysis of the engineering tricks of German engineers, the benefit of trophy equipment was enough.

But back to the local vacation of armor in the place of drilling holes. The base of the unit was a graphite electrode, connected to the drilling site, through which an electric current of 220 amperes and a voltage of 380 volts was passed. As a result, the armor was heated to the tempering temperature. Depending on the thickness of the armor and the diameter of the hole, it took from 7 to 15 minutes. After the tempering procedure, the hardness of the armor decreased by 2–2,5 times. It is noteworthy that in the domestic industry (including the tank industry), tempering was also used by electric current heating - the “know-how” of the Germans was only in the use of a graphite electrode.

The Germans also used the holidays when welding sheets of their highly hard armor with a carbon content in the range of 0,40-0,48%. This became known to the specialists of the Central Research Institute-48 (Armored Institute) during the war, when metal engineers were looking for recipes to reduce crack formation in the T-34 armor. As it turned out, the Germans released armored plates at temperatures of 500-600 degrees (high tempering), and then welded the armor preheated to 150-200 degrees in several passes. Welders did not use electrodes with a diameter of more than 5 mm - it is difficult to believe this, given the thickness of the armor of German tanks. Electrodes with a diameter of 4 mm worked at a current strength of 120-140 amperes, with a diameter of 5-6 mm - 140-160 amperes. This technology allowed not to overheat the weld area. So, a smaller quenching and tempering zone was obtained. In addition, after welding, the seam cooled very slowly - all this in the end allowed the Germans to more or less successfully deal with cracks in the joints. In addition, austenitic electrodes were mainly used, which led to a greater ductility of the weld and its long transition to a brittle martensitic state. The TsNII-48 engineers very carefully studied the features of the tank armor welding cycle, which allowed them to successfully transfer these techniques to the T-34 production cycle. Naturally, no one in the tank industry could afford such a painstaking multi-layered weld over the entire tank corps, the German know-how was used only in the most critical welds prone to cracking. 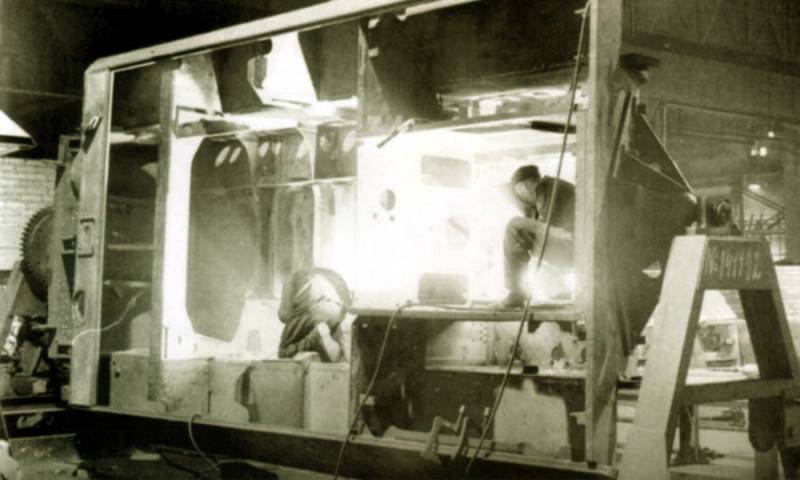 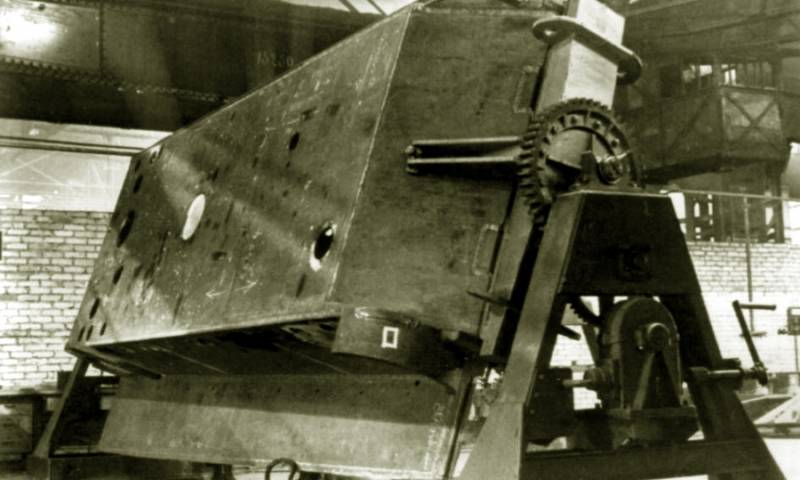 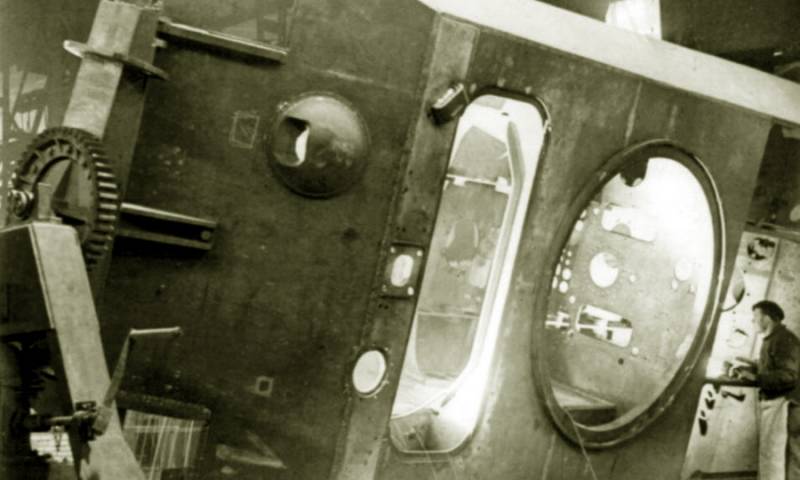 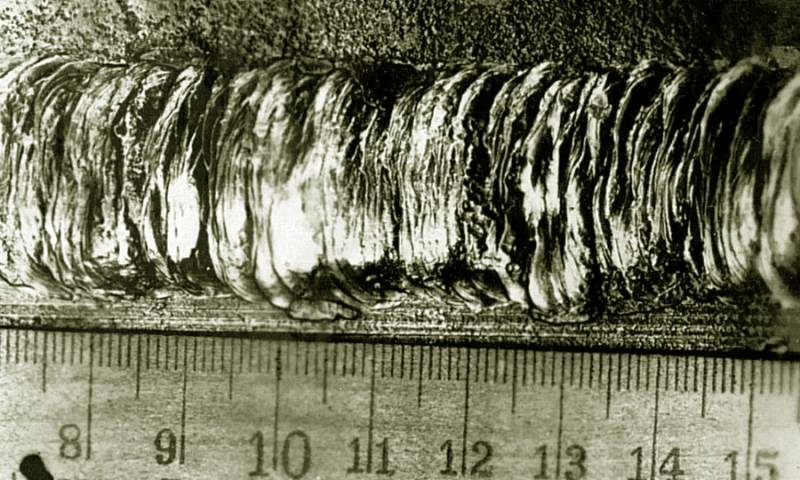 A sample of a German weld. Source: warspot.ru 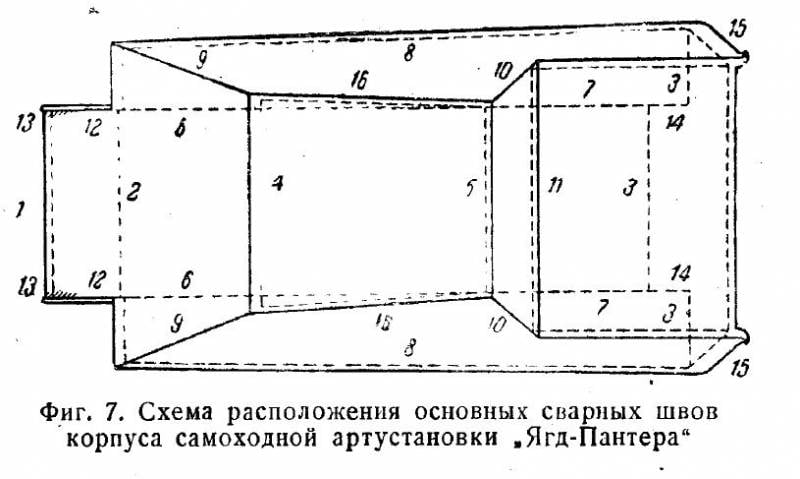 Source: Bulletin of the tank industry
The Germans carried out the welding of tank corps in rather comfortable conditions on huge tilters without preliminary tacks (although in some cases they nevertheless passed with a 5 mm electrode along the entire length of the connection). The tilter was a structure on which, like on a spit, it rotated around the longitudinal axis of the carcass of a German tank. The drive was either manual or electric. Due to the high precision of cutting, the gaps between the parts of the hull assembled on the tilter did not exceed (at least in the main period of the war) 3-4 mm. Otherwise, steel process gaskets were used. Long seams were broken by welders into several small ones and welded simultaneously in one direction. The end seams were also welded by two welders synchronously towards each other. This ensured the minimum quenching stress of the steel and their most uniform distribution. According to one of the legends voiced by Alexander Volgin in the material “Frame for a German menagerie”, the wages of welders at some enterprises of the Third Reich were piece-rate - for the mass of metal deposited on the tank. 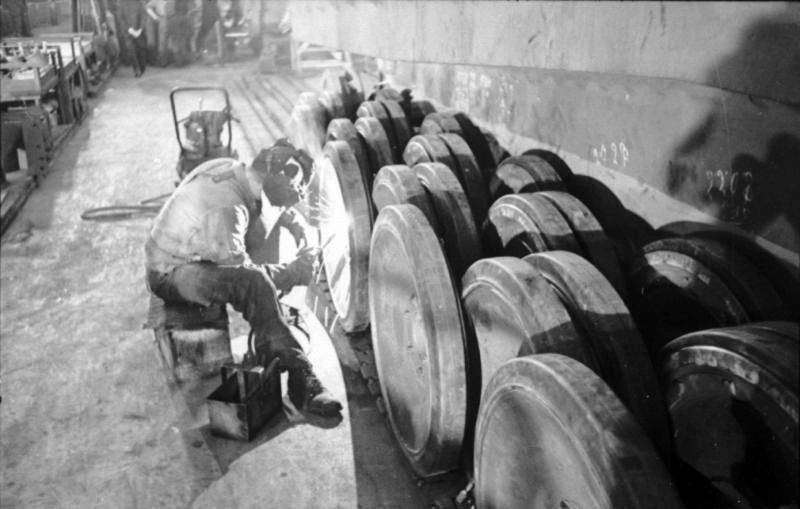 Assembly of the chassis of the tank Pz.Kpfw. VI "Tiger" at one of the factories in Germany. Source: waralbum.ru
There is no need to talk about any special rules for monitoring welds in the German tank industry - there were no x-rays, no magnetic flaw detection, or primitive drilling. And there were cracks in the seams! If up to 100 mm long, then they were ground and welded, and if more, then they were smelted by an electric arc and also welded. They also acted with visually detected cracks in the main armor. By the way, over time, the Germans managed to reduce the share of cracks in the welds from 30-40% to 10-20% due to new electrode compositions. Alternating passages in multilayer joints with austenitic and ferrite electrodes were also used.

Ctrl Enter
Noticed a mistake Highlight text and press. Ctrl + Enter
We are
Chernobyl notebook. Part of 3Myths of the Great Patriotic. Papier mache helmet
49 comments
Information
Dear reader, to leave comments on the publication, you must to register.