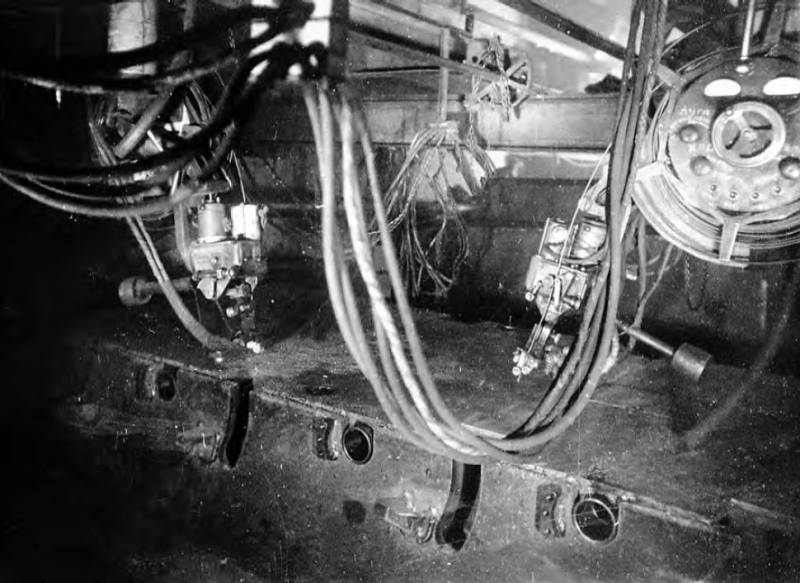 One of the main problems in the production of hulls and towers of T-34 medium tanks was crack formation in the places of welding of parts. It's all about the high hardness of the 8C armor, when small tears or microcracks form near the weld. The presence of residual stresses after welding for the first time after the production of the armored vehicle did not make itself felt, but over time it came out cracks up to 500 mm long. All this, of course, reduced the impact resistance of tank armor. To solve this problem, immediately after organizing the production of evacuated enterprises, in the second half of 1942, specialists from the Armored Institute (TsNII-48) and the Institute of Electric Welding of the USSR Academy of Sciences were involved. Research was carried out at two enterprises: the Ural Tank Plant No. 183 in Nizhny Tagil and the Ural Heavy Engineering Plant in Sverdlovsk. In total, from July to October, metallurgists and material scientists studied crack formation during welding of about 9500 armor parts. The aim of the study was to find the most optimal chemical composition of the 8C armor. It turned out that the most important component in the armor in this situation was carbon. If its content in the armor was more than 0,25%, the hardness of the hardened zone in the weld area increased sharply, which inevitably led to cracking. 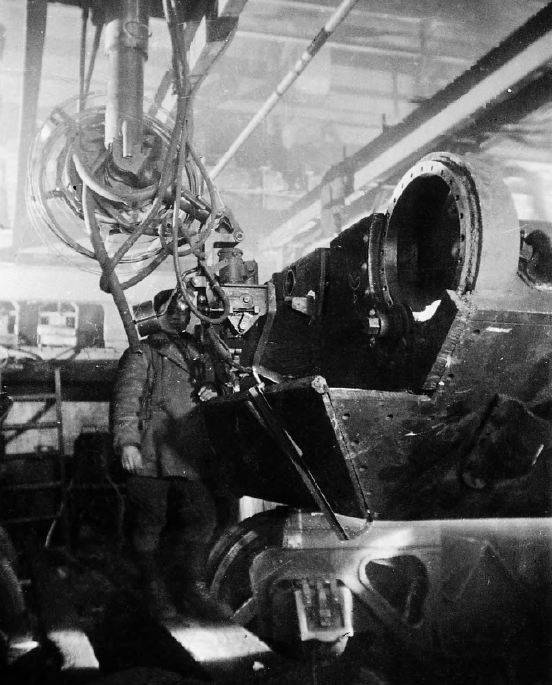 Installation for automatic submerged arc welding of the T-34-85 tank body. Plant number 183, 1944. Source: Russian State Archive of Economics
But to ensure such a low carbon content in armored steel in peacetime was not easy, but in wartime it generally seemed impossible. Small “cosmetic” changes in the welding cycle through the use of austenitic electrodes, a multi-roll weld system and low knot tempering after welding made it possible to raise the upper limit of carbon content to only 0,28%. By the way, in the German tank industry they did not hear about such serious requirements for tank armor - on average, the proportion of carbon was in the range of 0,4-0,5%. The solution to the problem of the appearance of cracks in the welding area was the preliminary heating of parts to 150-200 degrees Celsius with subsequent slow cooling of parts after welding to 100 degrees for 30 minutes. For this purpose, special inductors were developed at the Armor Institute that provide local heating of the armor parts in the gas cutting zone or in the weld. At the Ural Heavy Engineering Plant, inductors were used to weld the joint of the frontal part with the sides and the roof, as well as when cutting the balancing holes in the hardened side parts of the tanks. Thus, the problem of cracking during welding of medium-carbon armor plates was solved. Over time, the practice of the Sverdlovsk plant was extended to other tank plants.

In July 1941, by order of the Council of People's Commissars, the Institute of Electric Welding of the USSR Academy of Sciences was evacuated to Nizhny Tagil. That is why the Uralvagonzavod was first introduced automatic arc welding of tank hulls under flux. Of course, this technology was known before, but the group of academician Evgeny Oskarovich Paton and the staff of the Central Research Institute-48 were able to adapt it for welding armored steels. One of the outstanding scientists who contributed to the development of armored welding was Vladimir Ivanovich Dyatlov. He, together with employees of the Komintern Kharkov Plant, solved the problem of cracking in the armor during welding by introducing low-carbon wire into the weld pool (more on this below). In 1942, the scientist, the first in the world, discovered the phenomenon of self-regulation of arc processes with a melting electrode, which made it possible to significantly simplify the design of the feed mechanisms of welding machines. Also, due to this, it was possible to create relatively simple single-motor welding heads, more reliable and cheaper. Without Dyatlov, it would not have been possible to create efficient fluxes based on slag from blast-furnace charcoal furnaces of the Ashinsky Metallurgical Plant, which were called “ShA slag fluxes”. Since October 1943, the scientist headed the laboratory of the welding Uralvagonzavod and stayed in this position until 1944, until he was transferred to the Central Research Institute of Shipbuilding Technologies.

But back to the legendary T-34, which would never have become such a massive tank, if not for the automatic welding of its armored hulls (towers) at plants No. 183 and UZTM. The use of automatic welding machines made it possible to reduce welding time by 3–6,5 times. At the same time, at least 40 linear meters of welding seams were used for each tank corps. 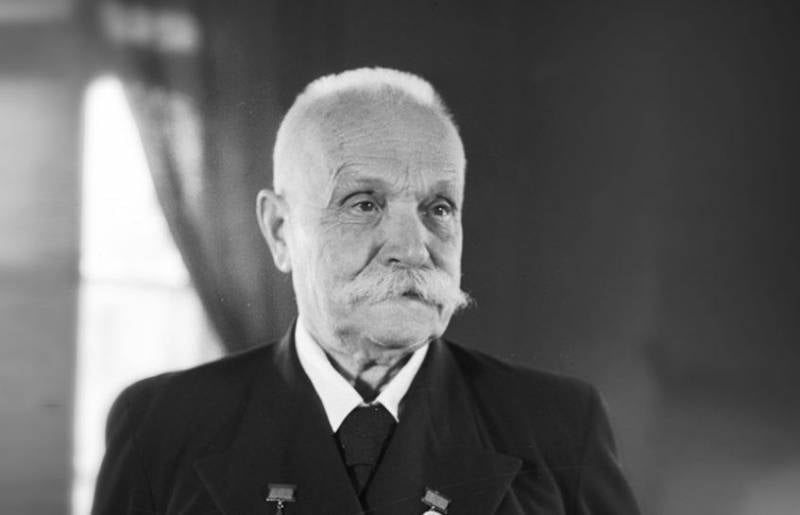 Academician Eugene Oskarovich Paton. Source: patom.kiev.ua
In addition to the T-34, welding of Academician Paton was used at the armored hull factory No. 200 in Chelyabinsk. With its help, the bottom of the KV tank hull was cooked, which in total was about 15 linear meters of seam per machine. It is also important that automation of armor welding made it possible to attract low-skilled workers to production - welding masters throughout the war were chronically lacking. Since July 1942, a unique tank conveyor has been operating in Nizhny Tagil in which 19 automatic submerged arc welding units operated. Evaluate the scale of the innovation - this allowed to release 280 high-quality welders for other works, replacing them with 57 low-skilled workers. Academician Yevgeny Oskarovich Paton himself, in a memo addressed to the secretary of the tank industry department of the Sverdlovsk regional committee of the CPSU (B.) In March 1942, spoke about the effectiveness of the introduction of automatic welding (quote from N. Melnikov's book “Tank Industry of the USSR during the Great Patriotic War”):

“Due to the high productivity of high-speed automatic welding under flux layers, the terms for welding bodies will be noticeably reduced, and the consumption of labor, electricity and electrode wire will decrease.”
A comparison of the time spent on manual and automated welding can be found in the archives of the exhibition complex of OAO NPK Uralvagonzavod. In accordance with them, for welding, for example, the overhead sector of the T-34 tower, the welder takes a little more than five hours, and automatic welding cope with this in just 40 minutes. The joints of the bottom using manual welding are boiled in three hours, and in automatic mode - in one hour.

Fight for a seam

It cannot be said that automatic welding machines appeared overnight at assembly plants of the Soviet tank industry. Firstly, the share of manual welding was still very high in the production of armored products, and secondly, at first, with the technology itself, not everything was smooth. It was not possible to give the weld the necessary level of ductility - after cooling, it became hard and brittle. This, of course, most negatively affected the projectile resistance of the armor. After analyzing the reasons, it turned out that it was all about exceeding the penetration depth of the welded metal, mixing the metal of the wire with the base metal and significant alloying of the weld metal. Groups from TsNII-48 under the leadership of I. F. Sribny and from the Institute of Welding, headed by V. I. Dyatlov, mentioned above, proposed and tested the following methods of welding the “rebellious” armor 8C and 2P. First of all, this is multi-pass welding, when the machine connects the parts to be welded in several steps. This ensures a small penetration of the joints and the formation of a durable and ductile seam. It is clear that this technique is not the most effective in wartime conditions: nevertheless, multi-pass welding requires a lot of time compared to single-pass. 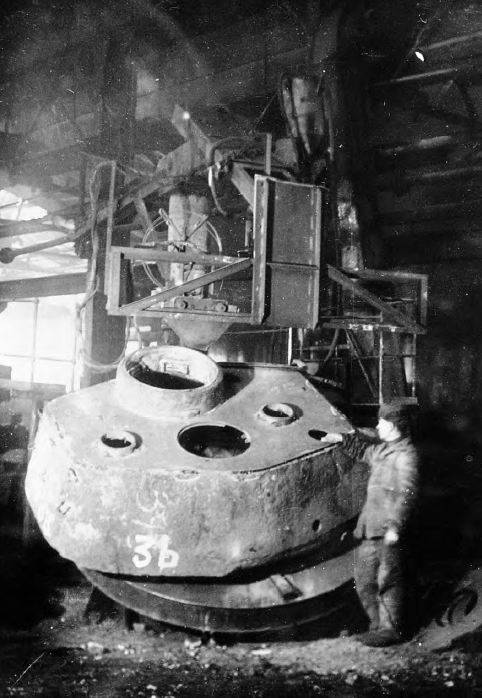 Installation for automatic submerged arc welding of the roof of the T-34-85 tank tower. Plant No. 112 "Red Sormovo", 1945. Source: Russian State Archive of Economics
The second method from the Central Research Institute-48 and the Institute of Welding was laying wire from mild steel in the cutting of joints to reduce the “fusion” of the armor metal. As a result, the seam after cooling became more plastic, the wire seriously reduced the temperature inside the seam but also doubled the productivity of welding machines. This turned out to be the most effective technique, which was later even improved. A new method of welding "in two wires", in which a second (filler) wire, not connected to a current source, was fed into the seam bath at an angle to the electrode wire. The supply and diameter of the second wire was calculated so that the amount of metal deposited from it was equal to the amount of metal from the deposited electrode wire, that is, the diameter of the second wire should be equal to the diameter of the electrode wire and their feed speed should be the same. However, due to the need to convert the automatic heads from feeding one wire to feeding two, the implementation of this method was postponed and it was replaced by a method with bar stocking. Nevertheless, already in June – July 1942, this method was applied at factory No. 183 when welding a batch of lower sheets of the nose of the tank’s hull with nasal beams. 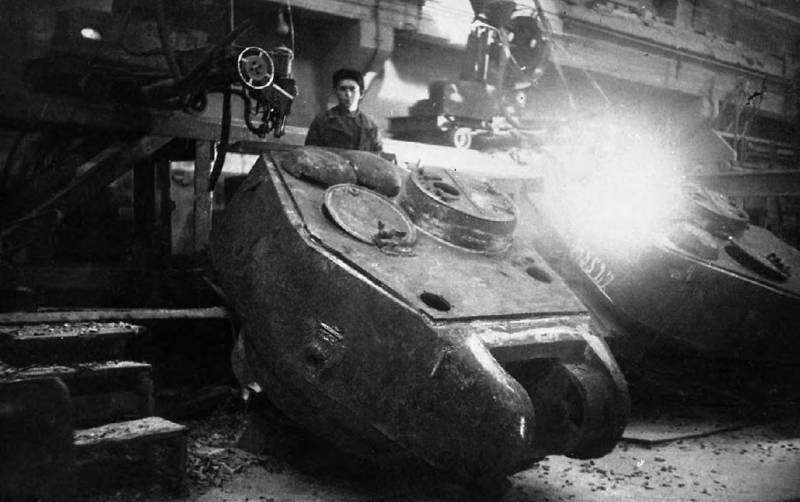 Installation for automatic submerged arc welding of the roof of a T-34-85 tank tower at Nizhny Tagil plant No. 183. 1944 year. Source: Russian State Archive of Economics
Difficulties with the automation of the welding of tank corps (towers) were also organizational plan. It is worth remembering that never before welding machines were not assembled in series and were, in fact, products of the pilot production of the Institute of Welding. This explains some slowness in the development of new technologies in the tank industry. So, by the end of 1942, there were only 30 to 35 automatic welding machines at the tank factories, which, naturally, were not enough. Therefore, the People's Commissar I.M. Zaltsman ordered by order No. 200c dated March 28, 1943 to order at the factory No. 183 additionally 7 automatic welding units by mid-May, 1 automatic machines in the Ural Heavy Engineering Plant until June 8 and demanded 15 units to be delivered to the Chelyabinsk plant by June 5 No. 200. This step was one of many that allowed the domestic tank industry to reach the planned production figures for the much-needed front of tracked armored vehicles.

Ctrl Enter
Noticed oshЫbku Highlight text and press. Ctrl + Enter
We are
Lesson Six: The Power of ScienceMyths of the Great Patriotic. Papier mache helmet
37 comments
Information
Dear reader, to leave comments on the publication, you must to register.