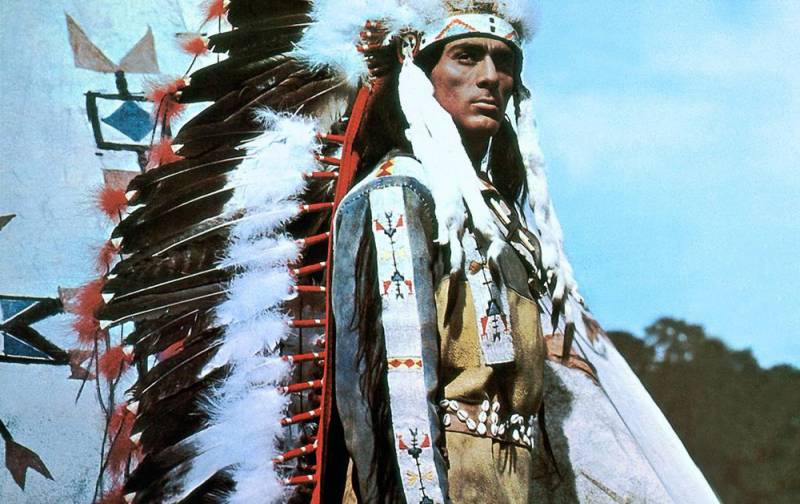 Shot from the movie "Sons of the Big Dipper." The Indian leader in the headdress looked, of course, impressive!

“Winnet cannot wait any longer! He cannot allow Shatterterhand and Tuyunga to be killed! ”
“Winnetu, leader of the Apaches”

True Sioux-Oglal Headgear (National Museum of the American Indian, Washington)
In the same year, two hundred Sioux attacked the Shoshone summer camp near the Sweet Water River and stole about 400 horses from them. Vashaki with a detachment of soldiers rushed to pursue them, but lost the battle, and his eldest son Sioux was killed and scalped in front of him, but he could not do anything. 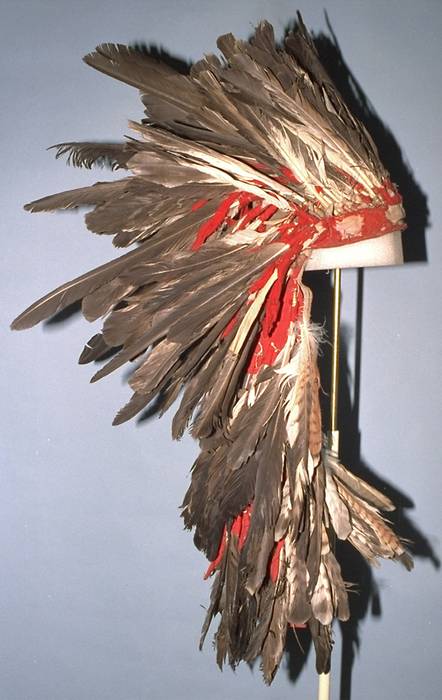 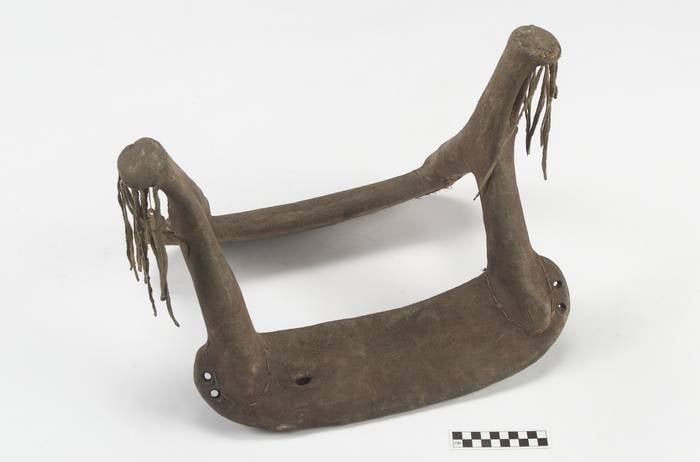 Saddle of bills. (National Museum of the American Indian, Washington)
After that, he took up the constant training of his soldiers, and did not disdain what his friends, army officers, had taught. The Sioux were more numerous, so he had no hope of defeating them, but he decided to get even with his enemies in any way, eleven years later he finally had the opportunity! 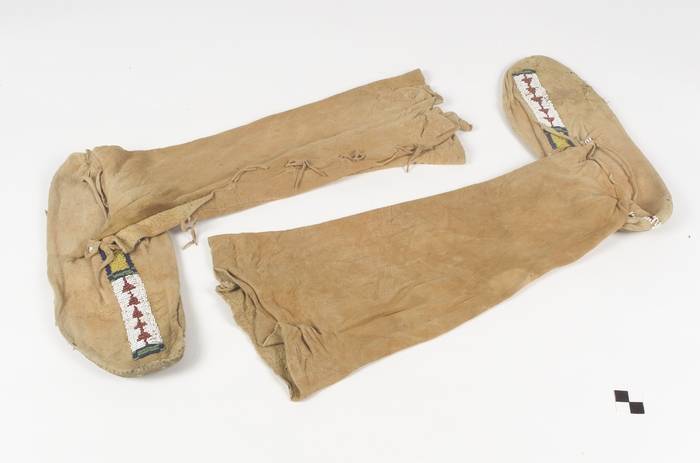 Arapaho: Women's leggings paired with moccasins. (National Museum of the American Indian, Washington)
This happened in the spring of 1876, at the height of the so-called war for the Black Hills, when American General George Crook was placed at the head of troops aimed at pacifying the Sioux and their loyal Cheyenne allies. 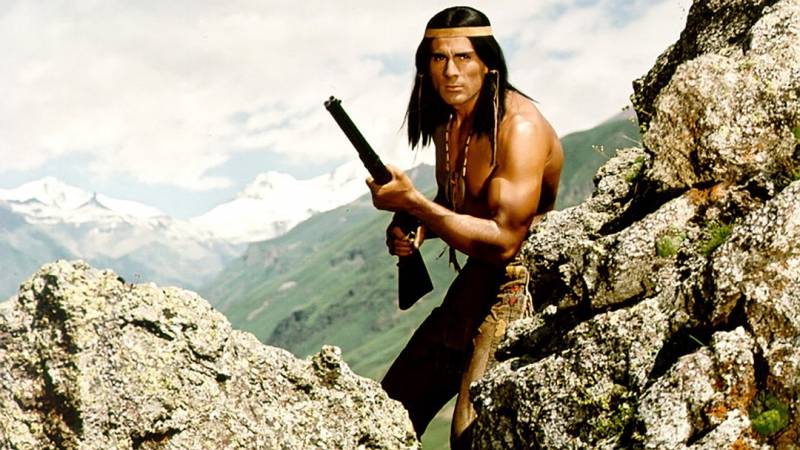 That one will come out from behind the stones, and you will not have time to blink an eye, as it turns out without a scalp! Shot from the movie "Trail of the Falcon".
Crook was an experienced and intelligent person and well understood that "only Indians can track down Indians." Moreover, the experience of the civil war, in which many Indians participated on the side of the southerners and proved to be unsurpassed masters of guerrilla warfare, unequivocally testified that the White army needed the support of friendly Indians. And Crook began to look for such support against the Sioux rebels and found it in the person of the Shoshone. When the emissaries of Kruk came to Vashaki, he willingly promised them his assistance. And Colonel John Gibbon from Fort Ellis met about the same time with the Crow leaders on Yellowstone, and they also promised to send him scout scouts. 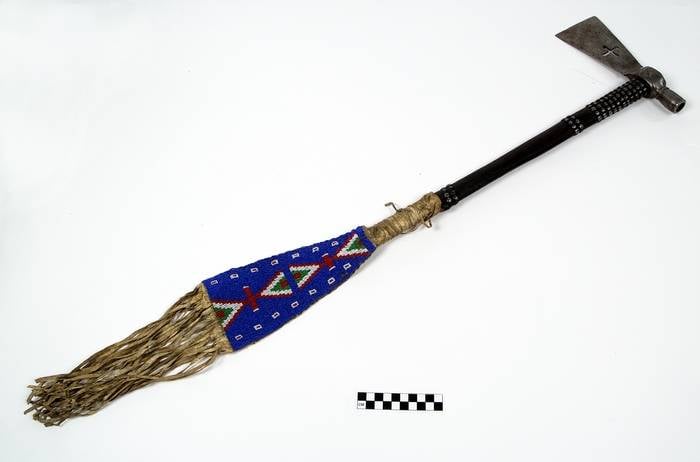 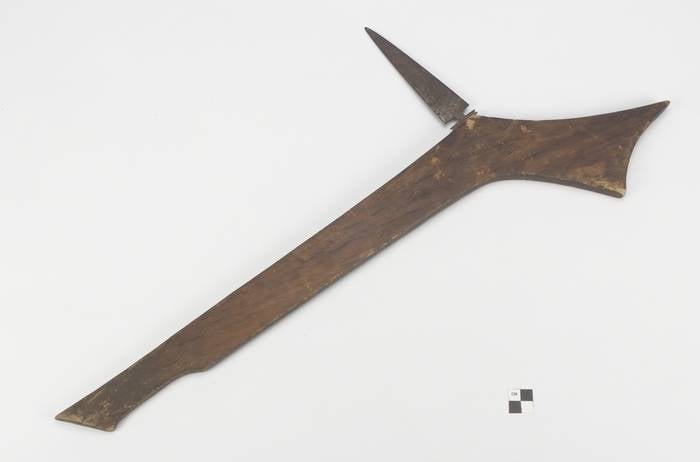 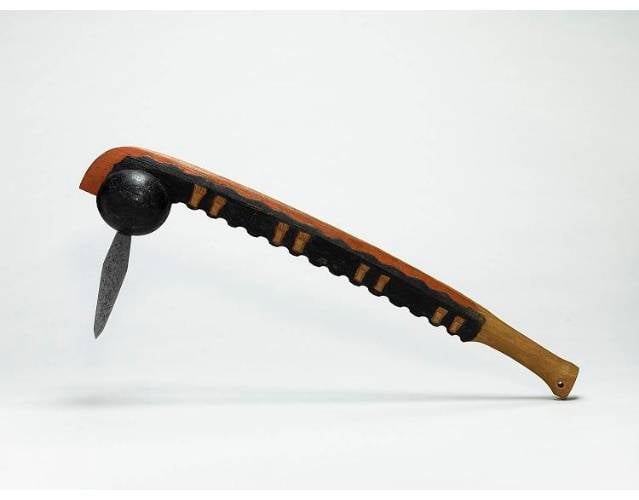 At the same time, unprecedented measures were taken in Washington to strengthen an alliance with friendly Indians. On July 28, 1866, by a special act of Congress, Indian Scout units in the US Army received official status. “The President of the United States has the right to attract Indigenous forces not exceeding one thousand men to serve in the United States Army as scouts who are supposed to be put on cash allowance and also to equip ...”, the document said. Scout scouts who took the oath and enlisted in the US Army were entitled to a salary of $ 30 a month, that is, the same amount as cowboys earned at that time, and this earnings was considered very good, and for an Indian such money was just something unthinkable. In addition, Colt’s company specially launched the Colt Frontier Scout revolver with an engraved image of an Indian head in a ceremonial headdress. This revolver was issued only to Scout Indians, and they were very proud of this privilege. 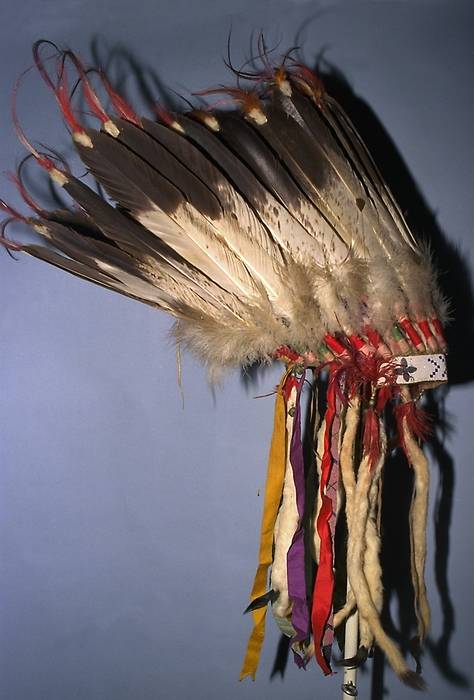 The headdress of flatheads (“flat-headed”), 1883-1955. (National Museum of the American Indian, Washington)
And so it happened that the Crow Indians stood shoulder to shoulder with the Washaki warriors during the Battle of Rosebad Creek.

Then, on June 14, on the eve of the battle with the Sioux, 176 Crow warriors led by the leaders of the Magic Crow, Old Crow and the Good Heart came to him in the camp a day later, 86 more Shashony Vashaki. Lieutenant John Gurke of General Crook’s detachment later wrote: “The Shoshone galloped towards the main headquarters, then turned around and galloped gracefully on the left front, surprising everyone with skillful dressage of horses. No warriors of civilized armies moved so beautifully. An exclamation of surprise and delight was greeted by this barbarian platoon of harsh warriors by their former enemies, today's friends - the crow. ” It is said that there is no hatred stronger than the hatred of one brother to another. The Redskins were people of the same tribe, culture, but ... did not want to understand this, fortunately for the whites, who, naturally, immediately took advantage of this enmity. 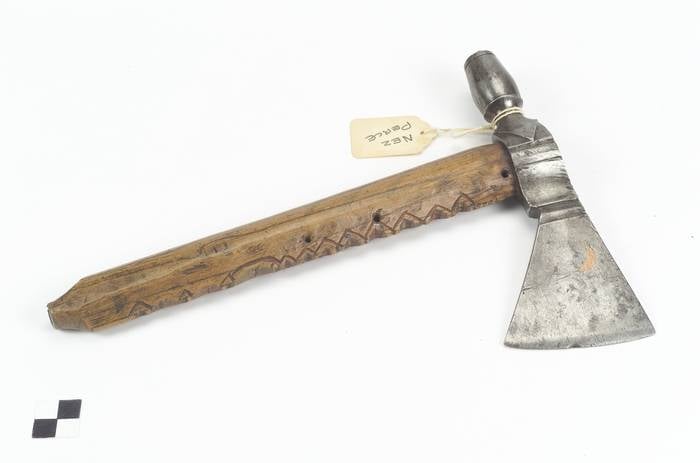 Tomahawk Nez Perce Indians. (National Museum of the American Indian, Washington)
As a result, Kruk now under command was a great force of 1302 people: 201 infantryman, 839 cavalrymen and 262 Indian scouts. At the military council, Vashaki and the Crow leaders asked him to allow them to fight the Sioux with "their own methods" of action, and the general agreed to give them complete freedom of action.

When more than 1500 Sioux warriors attacked Kruk's position, the Shoshone and Crow were not afraid or confused, but the first to take the fight.

“The Shoshone leader rode forward on a hot horse. He was stripped to the waist, and on his head was a beautiful headdress of eagle feathers, a train of which fluttered behind his horse. The old leader was everywhere: he and General Crook discussed tactics through an interpreter, at the front he encouraged his soldiers, consulted with his leaders, and even helped protect the wounded officer — Captain Guy Henry, the squad leader. ”
Guy Henry held the defenses at an altitude that was subjected to a powerful attack by the Sioux. A bullet hit him on the left cheek and passed through under his right eye, his whole face was covered in blood, and he fell from his horse, losing consciousness. His soldiers retreated, throwing him at a height. Noticing this, the Sioux warriors galloped galloped to the wounded officer, hoping to scalp him. But the leader of Vashaki, together with the Shoshone warrior named Little Tail and other Scout Indians, surrounded Captain Henry and fired from the Sioux until the soldiers arrived to help them and took the wounded man to the rear. 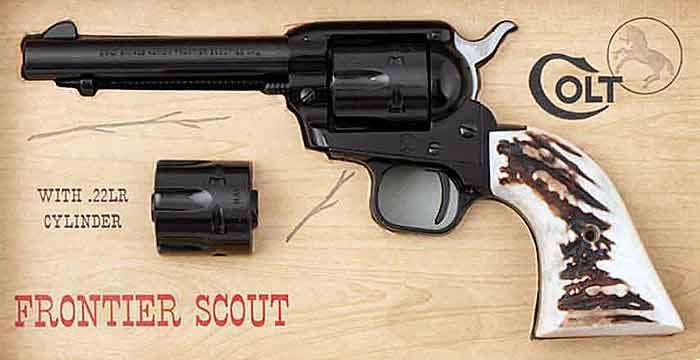 Colt frontier scout 1873 in a modern design
And it would not be an exaggeration to say that on that day only vigilance and dexterity of the Crow and Shoshone Indians saved Crook and his soldiers from an imminent catastrophe, which, by the way, would have been even more impressive than the defeat of General Custer at Little Bighorn. And so Crook could report on the victory, because the battlefield remained behind him. Although, on the other hand, during this battle, his soldiers shot 25 thousand rounds of ammunition, killing only ... 13 Indians! However, he could be comforted by those, it was only those whom the Sioux could not take, as well as the wounded, and they probably had much more killed. 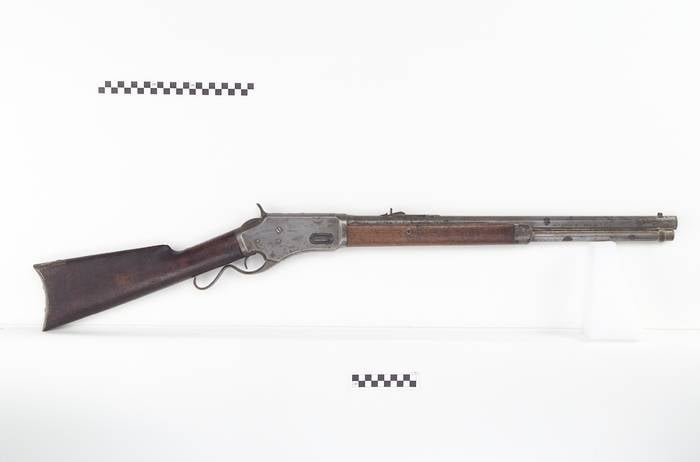 The famous "Winchester" with an underbarrel store was far from the only example of such weapons indian prairie. The Borges rifle of .45 caliber 1876-1877 belonging to some Nez Perce Indian (“pierced noses”) was quite similar to it (National Museum of the American Indian, Washington) 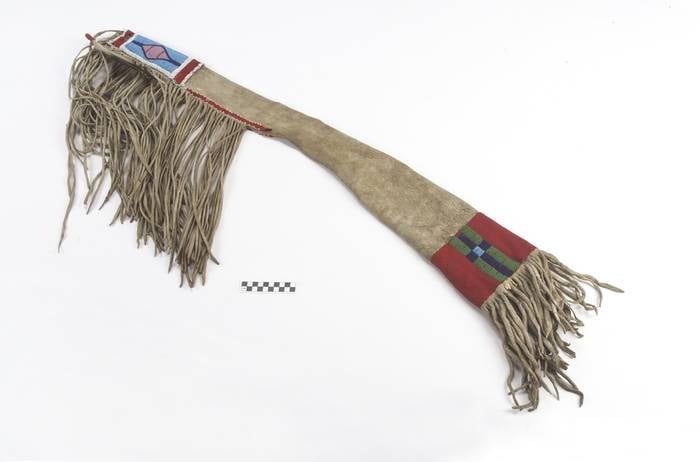 Case for a similar gun
Crook's losses amounted to 28 people killed, including several Indian Scouts, and 56 people seriously injured. The leader of the Sioux Raging Horse was ready for a new battle the next day, but chose to retreat, and eight days later, thirty miles north, to Little Bighorn, he also destroyed the Custer detachment. That's just the battle of Rosebad Sioux gave their own name, which was: "The battle with our Indian enemies." That is, the fact that soldiers from the Crook detachment also fought on Rosebad, they simply did not take into account! 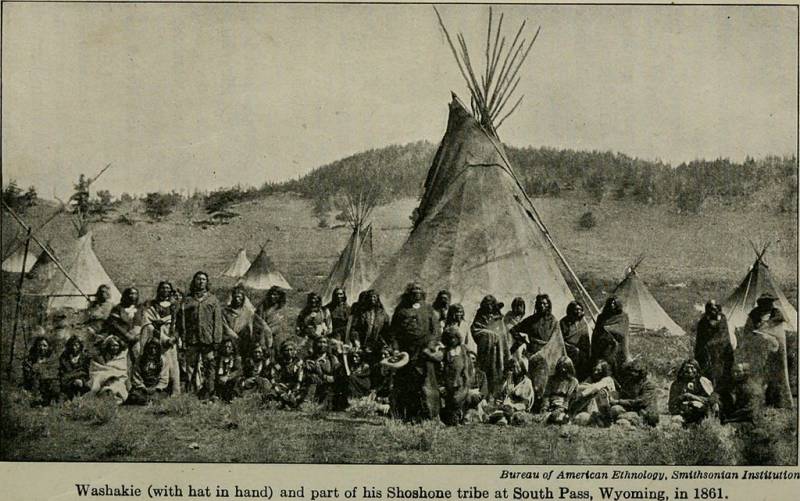 Shoshone together with the leader Vashaki in 1861. (Bureau of American Ethnology, Smithsonian Institution) (National Museum of the American Indian, Washington)
The exceptional role of the Shoshone leader in the battle of Rosebad was marked by white. President Grant himself soon personally presented him with a saddle that touched Vashaki so much that he even wept. 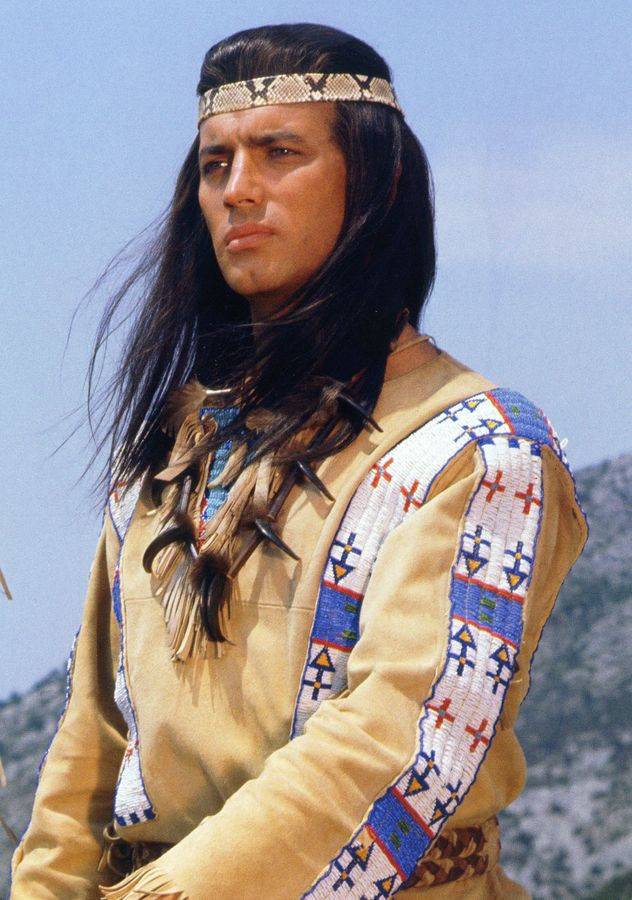 Pierre Bryce as Leader of Winneth. Well, the leader of Vashaki was in no way worse than him!
After that, he continued to fight with the Sioux and Cheyenne on the side of the United States Army until the defeat of the latter in November 1876. After that, his military career ended, but as a scout he continued to receive army rations for the rest of his life. Well, in 1878, as a sign of his services, Fort Camp Brown was renamed Fort Vashaki by the decision of the US government, and this once again pleased the old leader. 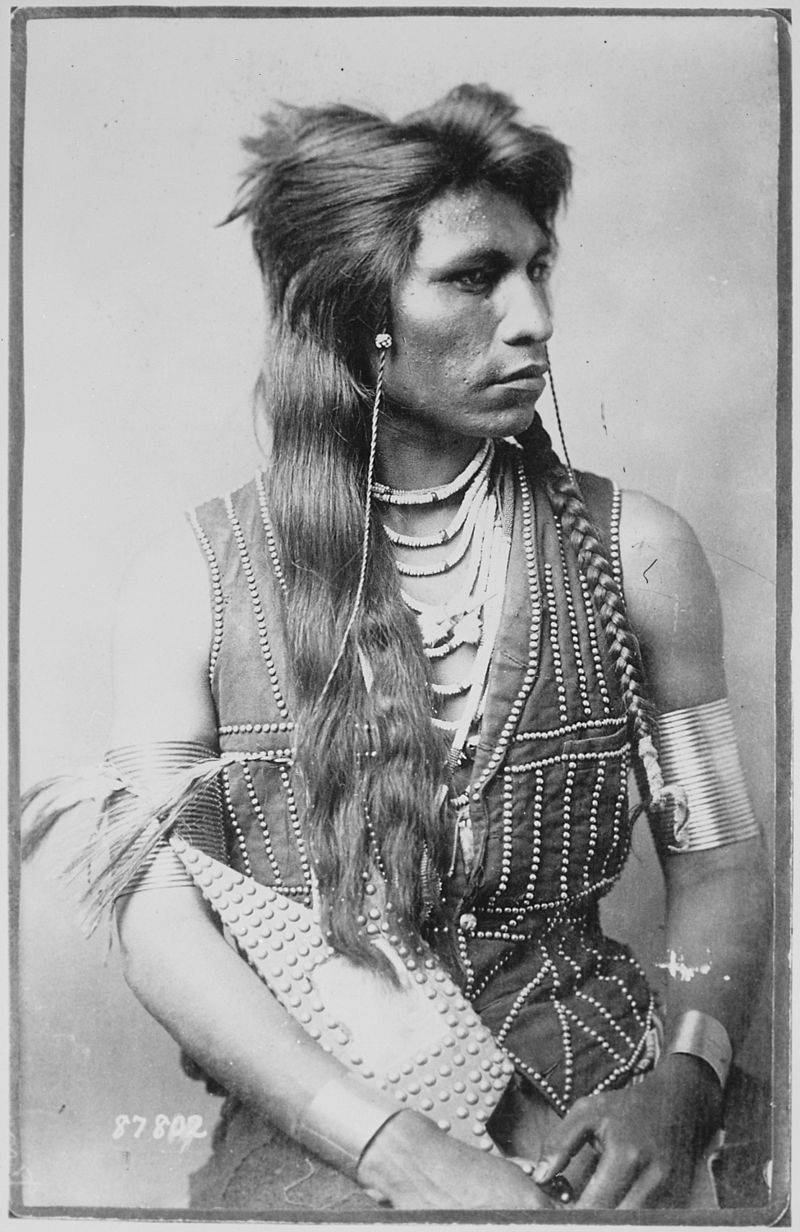 Rabbit Tail, Shoshone Scout from Captain Ray's company. (US National Archives)
Nevertheless, the interests of his tribe, Washaki defended with honor. So, already at the age of 90, he defended the Shoshone rights to land, in the territory of which springs with hot mineral water, the so-called Great Hot Springs ("The Great Hot Springs"), were discovered. He never allowed Shoshone to be relocated to the so-called Native American territory and outlived all those who had once tried to kill him! 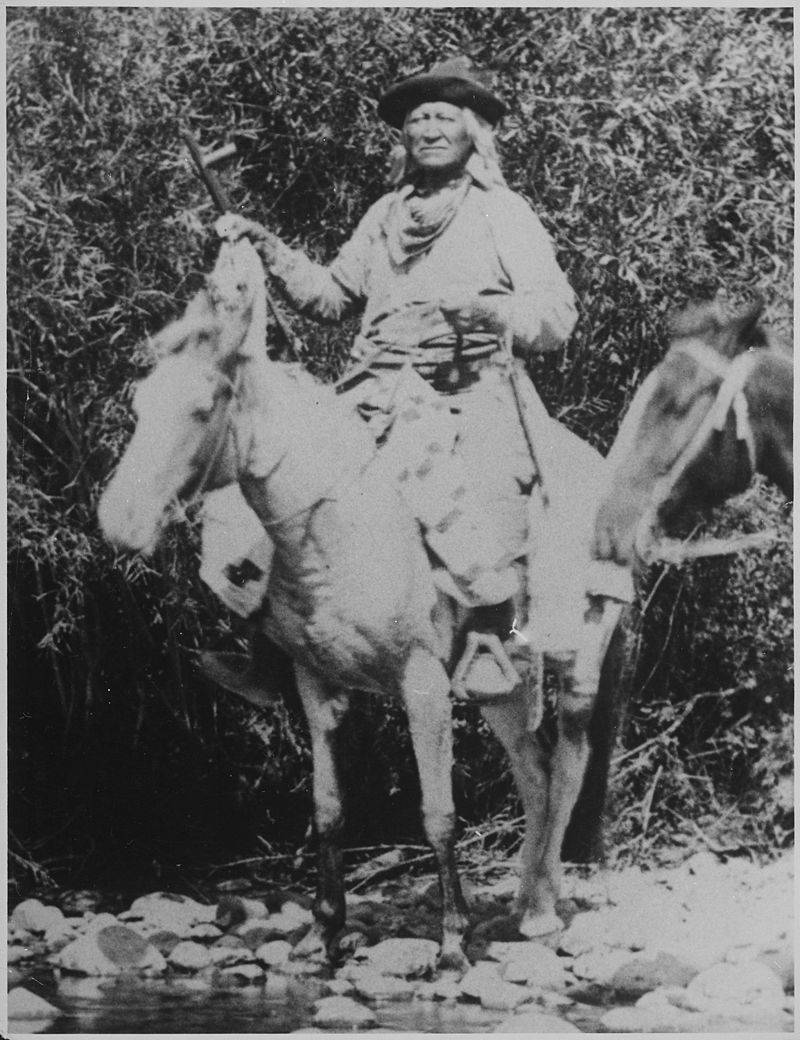 Washaki, Shoshone Leader (US National Archives)
Contemporaries described the leader Vashaki as a very brave, intelligent, and at the same time unsophisticated and very, so to speak, “human”, with understandable weaknesses of the “son of the prairie”. For example, he was proud of his log cabin, which he built with his own hands. Her walls were covered with paintings depicting his exploits, which his son painted for his father, and he always showed them to his guests. On his hat was a silver plate with the inscription: “Our child”, which at that time usually nailed ... for coffins and which he traded for a bow and arrow from the son of a furniture dealer. He was also very proud of the medallion and beautiful saddle given to him by President Ulysses Grant. He liked the photographs in which he was captured and his portraits painted by artists. It is interesting that on one of them, Vashaki was depicted with his favorite jewelry - a beautiful pink sea shell, which served as a fastener for his tie. Someone in this sink had a secret meaning, but which Vashaki did not tell anyone. In 1885, missionary teacher A. Jones wrote that he had a “pleasant and open face” that became so mobile and expressive during his speeches that it was really nice to look at him. And his smile was like "a ray of soft light in a beautiful picture."

Toward the end of his life, he became blind and bedridden in his house on Little Wind River. On the night of February 20, 1900, he gathered his family around him and said: “Now you have what we have been fighting for so long and bravely. Keep it forever in peace and with honor. Now go and relax. I will not speak with you anymore. ” He soon died, and two days later with military honors he was buried at the fort of his name. 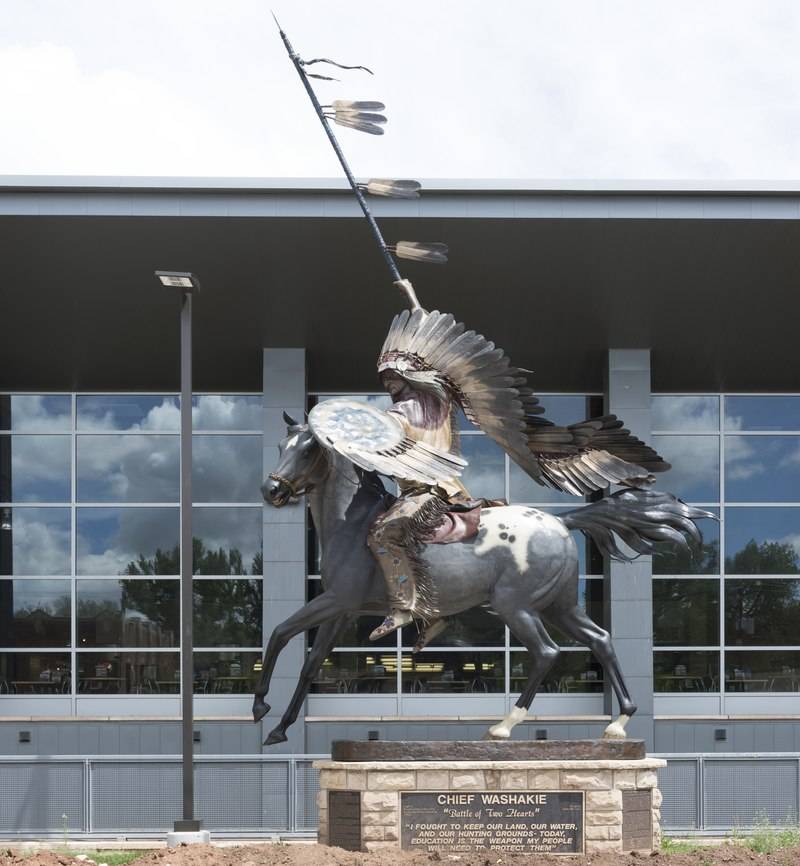 Author:
Vyacheslav Shpakovsky
Articles from this series:
Vashaki: the leader who accepted the inevitable changes

We are in Yandex Zen
Vashaki: the leader who accepted the inevitable changes
The Battle of Rosebud: Indians vs. Indians
56 comments
Information
Dear reader, to leave comments on the publication, you must to register.