Warriors of Eurasia. As with Western European knights, martial art mamelukes was the art of the riders, as its name suggests: Furusiyya, from the Arabic word "Far" - a horse. In Italian, a horse is “cavalry” - hence cavalry and cavaliers, in French - “cheval”, and hence - “Chevalier”, in Spanish - “bondage”, and hence - “caballero”! And in Germany, the word "ritter" literally meant a rider. That is, this terminological similarity only emphasizes the similar nature of warfare by Egyptian Mamelukes and knights of Western Europe. Although there were certain differences. If knights never shot from a bow while riding a horse, then for Mamluks this type of shooting was a typical way of fighting. And the Mamluks from the knights were distinguished by a high discipline, inspired by them from the very beginning of their training. The knightly youth of Europe was brought up differently and with discipline the knights always had big problems! 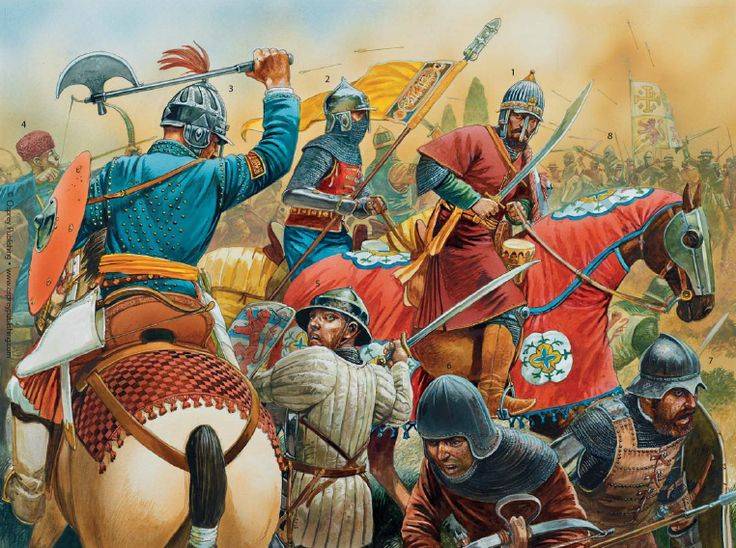 Mamluks at the Battle of Hirokitia on 7 July 1426 of the year on the island of Cyprus. Fig. Peter Dennis

People developed in the most comprehensive way!

The fursy included archery, fencing, exercises with a spear and other forms weapons, wrestling and horse riding. It was also necessary to know the basics of horse anatomy and the pedigrees of the most thoroughbred horses. In addition to archery from a horse (which is how they actually differed from the knights of the West), the Mamluks were taught to use a crossbow, both in horseback and on foot. Popular, as in Europe, a means of mastering the horseman art was hunting with birds of prey and ... again, with a bow and crossbow. And every Mamluk should have been able to swim and play backgammon and chess! 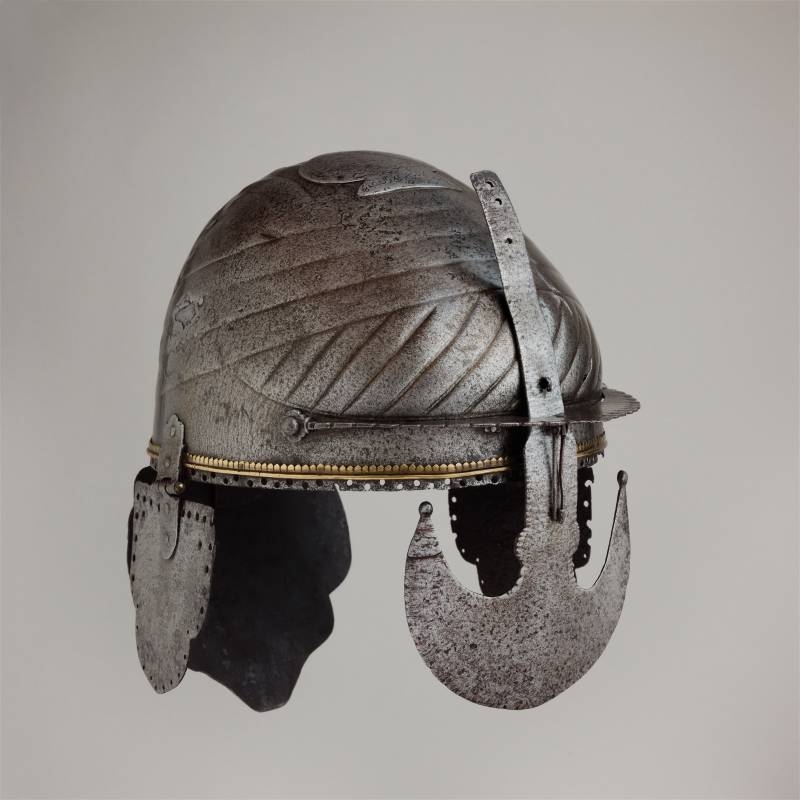 17th century Indian turban helmet. Made in Dean, Bishapur. The helmet has the shape of a fabric turban. On a steel plate riveted on top, it says in Arabic: "There is no hero like Ali, and no sword like Zulfikar." This refers to the cousin of the Prophet Muhammad and the sword of the Prophet, which he gave to Ali. Height 30.5 cm; diameter 27.9 cm; weight 1760.5 g. As in Europe in the East, the "internationalism" of arms was very developed. Weapons were bought and sold sometimes thousands of kilometers from the place of production (Metropolitan Museum of Art, New York) 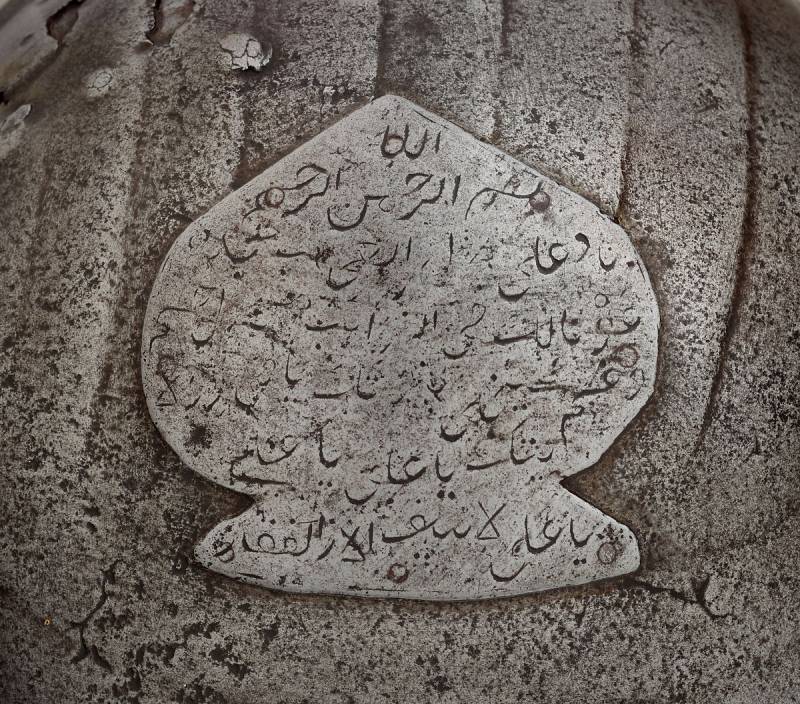 Here is this plate with an engraved inscription

Armament for soldiers to match.

We will still have material within the framework of the declared topic regarding the Middle East warriors, therefore, it makes no sense to talk about arming the Mamelukes before the 1350 of the year, there will be more about this. But about the weapons of the Mamluk warriors of the 15th century, it should be said that it was formed on the basis of the experience of previous centuries and consisted of a cotton caftan (haftan) lined with cotton, sewn both in the form of a dressing gown and in the form of a short shirt. Chain mail and lamellar armor, the javshan, a kind of plate corset, were put on him. The head of a simple warrior was well protected by an ordinary turban, but the rich Mamluks undoubtedly preferred metal helmets (usually a turban type) with platbands and chain mails to him. In the same XV century, separate armor was gradually replaced by chain-plate armor with an axial cut and fasteners on the chest. The chain mail in these armors, which was called Yushman in Russia, was supplemented by rows of rectangular plates on the chest and on the back, which are very convenient for decorating them with engraving and inlay. The hands covered the tubular bracers, the legs to the knees - lamellar or chain mail leggings with metal knee "cups" and triangular chain mail lap, hanging from them down to the shin. 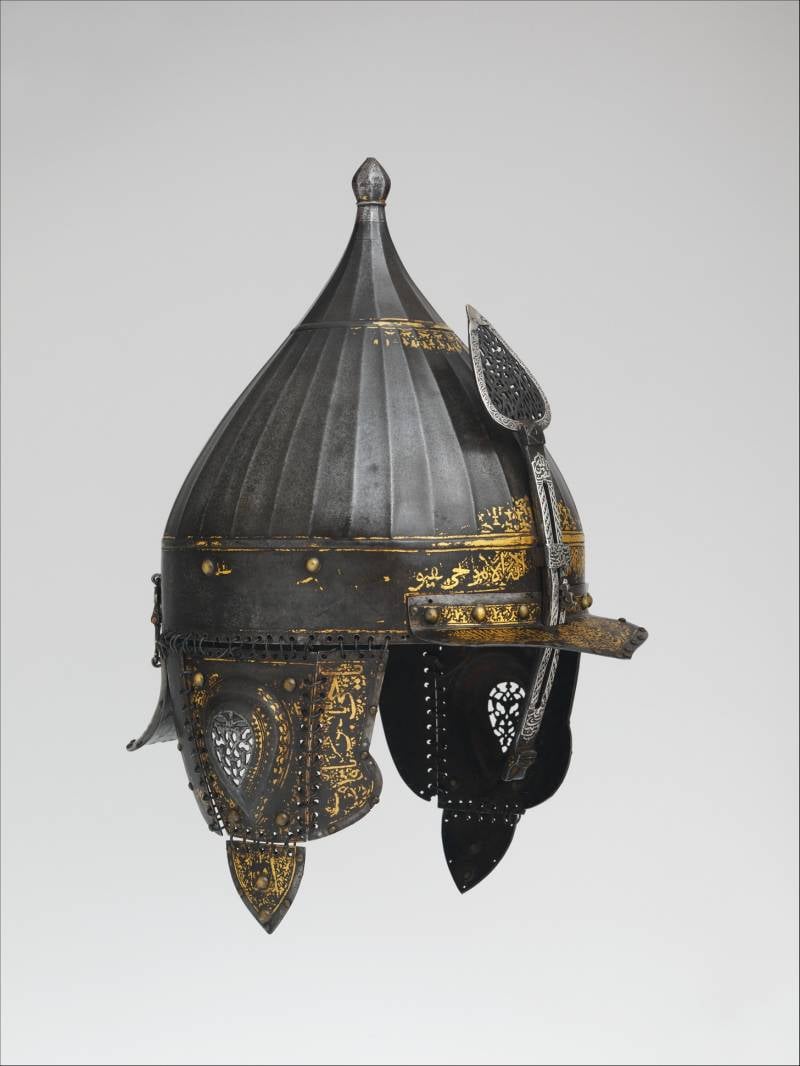 It is believed that this is one of two helmets (the second is in the Vienna Armory), made around 1560 of the year for the great vizier of the Ottoman Sultan Suleiman the Magnificent (rules in 1520-66). Both helmets were allegedly made in one of the imperial workshops, possibly in Istanbul. Although this helmet is undoubtedly military, judging by its beautiful finishes and decorations, it could be created as part of the ceremonial armor and as a symbol of the high rank of its owner. Height 27.8 cm; weight 2580 g. (Metropolitan Museum of Art, New York) 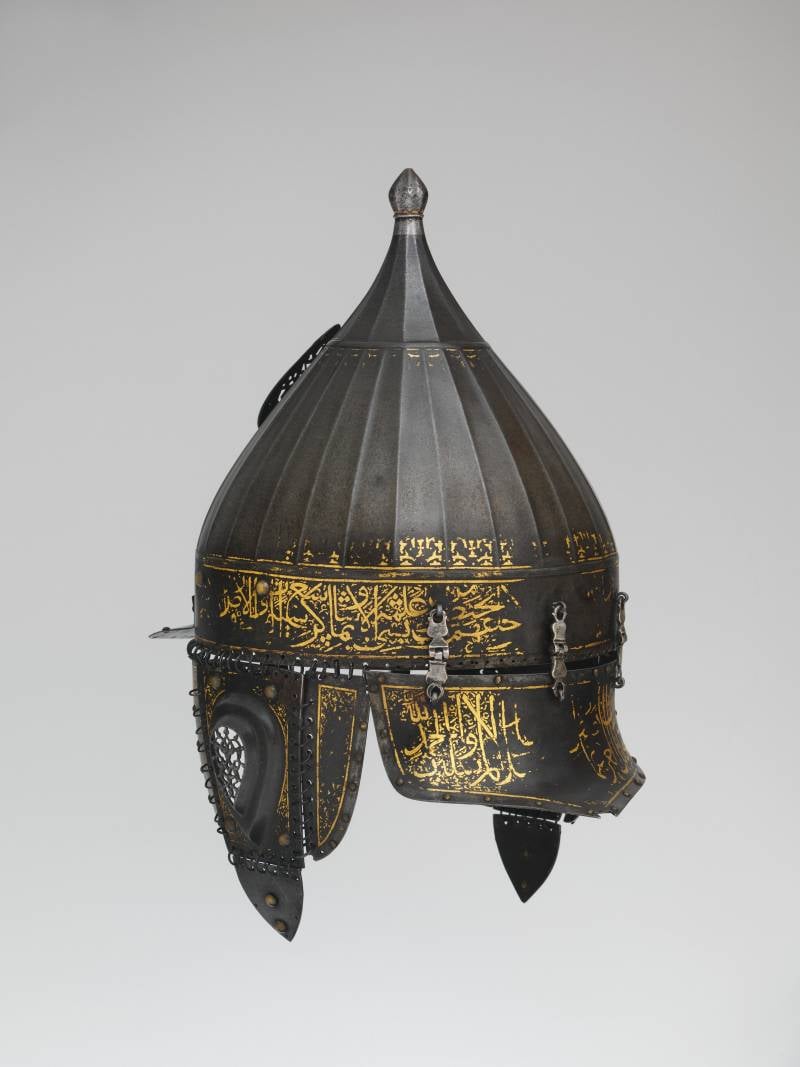 The main means of defeating the enemy, unlike the knights of Europe, among the Mamluks was a bow, not a spear. But they had spears (usually with bamboo poles), straight swords, oriental sabers and maces; as well as crossbows used in sieges and during battles at sea. On a campaign, the Mamluk warriors usually had only one horse, but one or a couple of camels to transport equipment. There was no uniform uniform, but many wore red or yellow clothes. Most of the Mameluk banners were also yellow, because the banners of the former Ayyubid dynasty were of the same color. The insignia of the military leaders were belts richly decorated with precious stones, set in gold and silver. However, not only belts were decorated, but also armor and weapons. The turban helmets were buried, covered with gilding and silvering, and Arabic texts were applied to them by engraving and inlaying (notches): texts of praise to Allah, surahs from the Koran, and also wishes for victory to their master. The same inscriptions were made on large plates of Yushmans, and there were masters who even managed to put the name of Allah and his prophet Muhammad on the rings of the baydans (chain mail from wide flattened rings)! 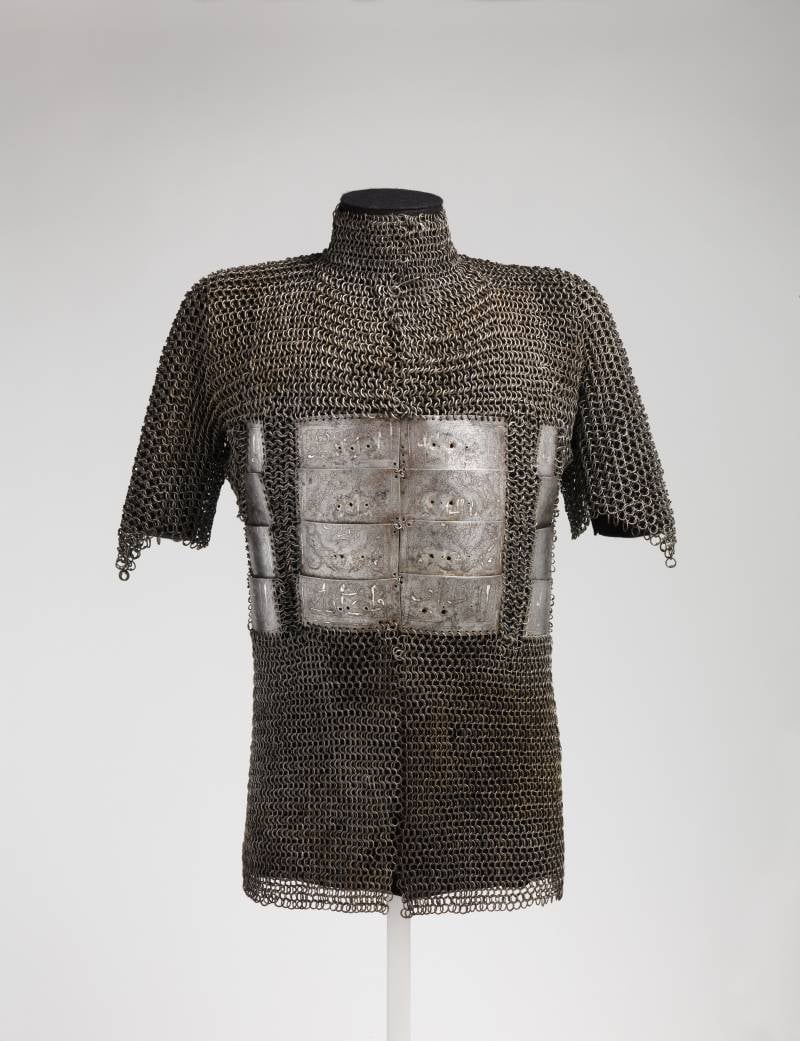 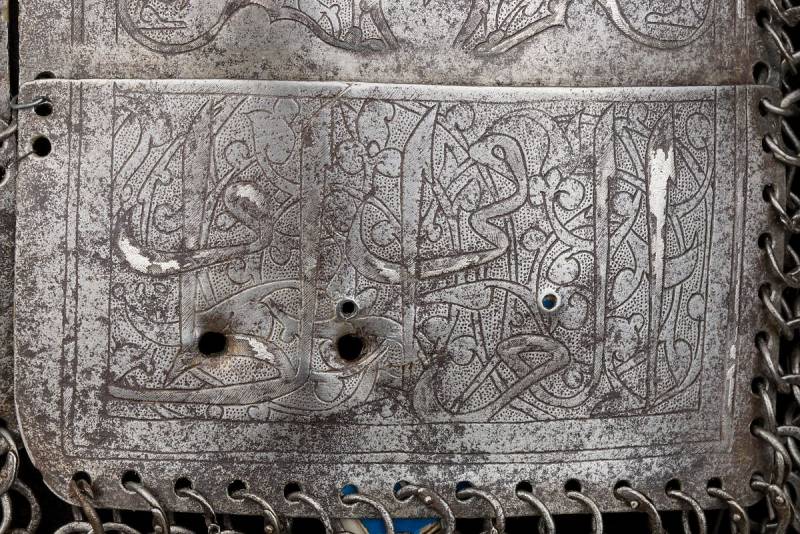 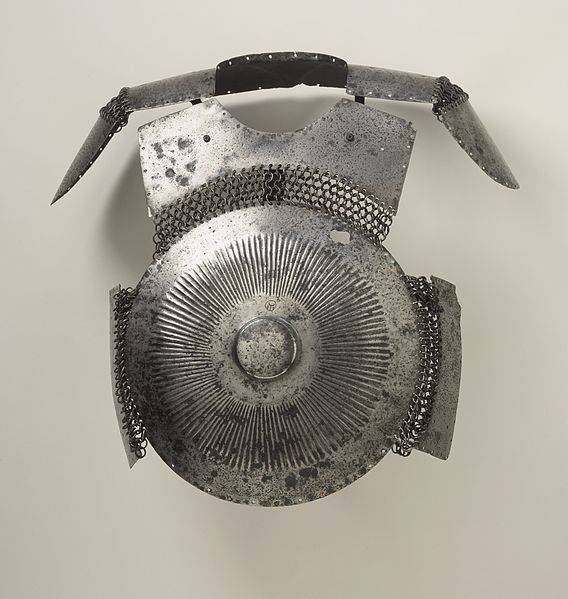 Tactics for the corresponding combat personnel

Since the Mamluks were an equestrian army, the main thing in their tactics was maneuvering. By a false retreat, they sought to upset the ranks of the enemy and unexpectedly hit him from the flank. But they also had infantry. More disciplined and trained than European. Although the Mamluks rarely used infantry in battle in the field, they usually rely on cavalry in this case. The main task before the battle was to choose the most convenient location, with the expectation that there was a hill or hills behind to make it difficult for the enemy to attack from the rear. The construction of troops was traditional: the center and two flank units. A small enemy Mamluks sought to surround. But the superior forces of the Mamluk commanders tried first of all to exhaust them with frequent attacks, and then wedge themselves into the mass of horsemen where they found weakness. Cavalry of the Mamluks could, standing still, bombard the enemy with a hail of arrows, and then fake a flight, hoping that the pursuers on wounded horses would be put aside at the jump and thus the number of enemy troops would be reduced even before hand-to-hand fighting. There were special treatises on how to shoot and where to aim. It was indicated, for example, that if the enemy is nearby, then first you need to remove the sword from its sheath and hang it on your wrist. It was possible to shoot from a bow at him only after that, and having fired all the arrows, immediately attack the enemy demoralized by such a shelling! 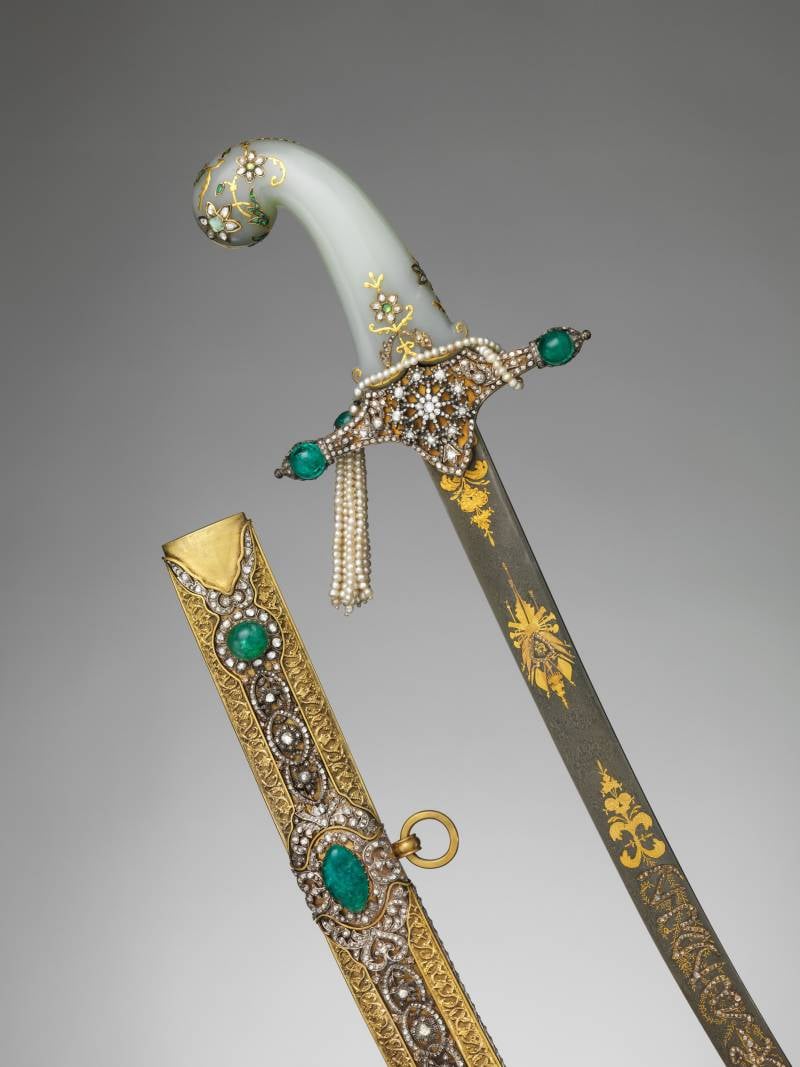 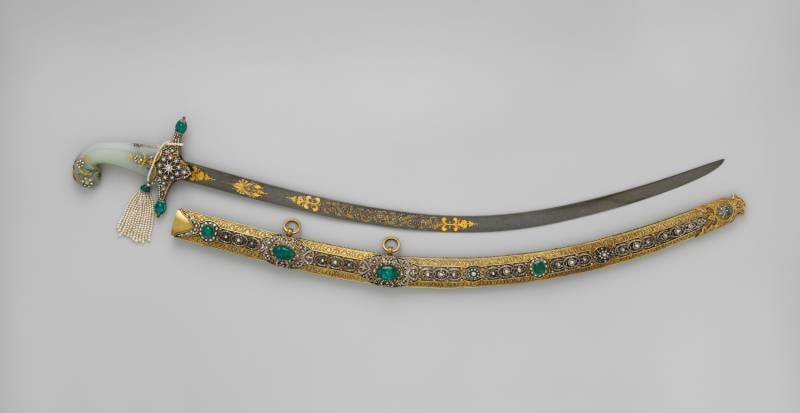 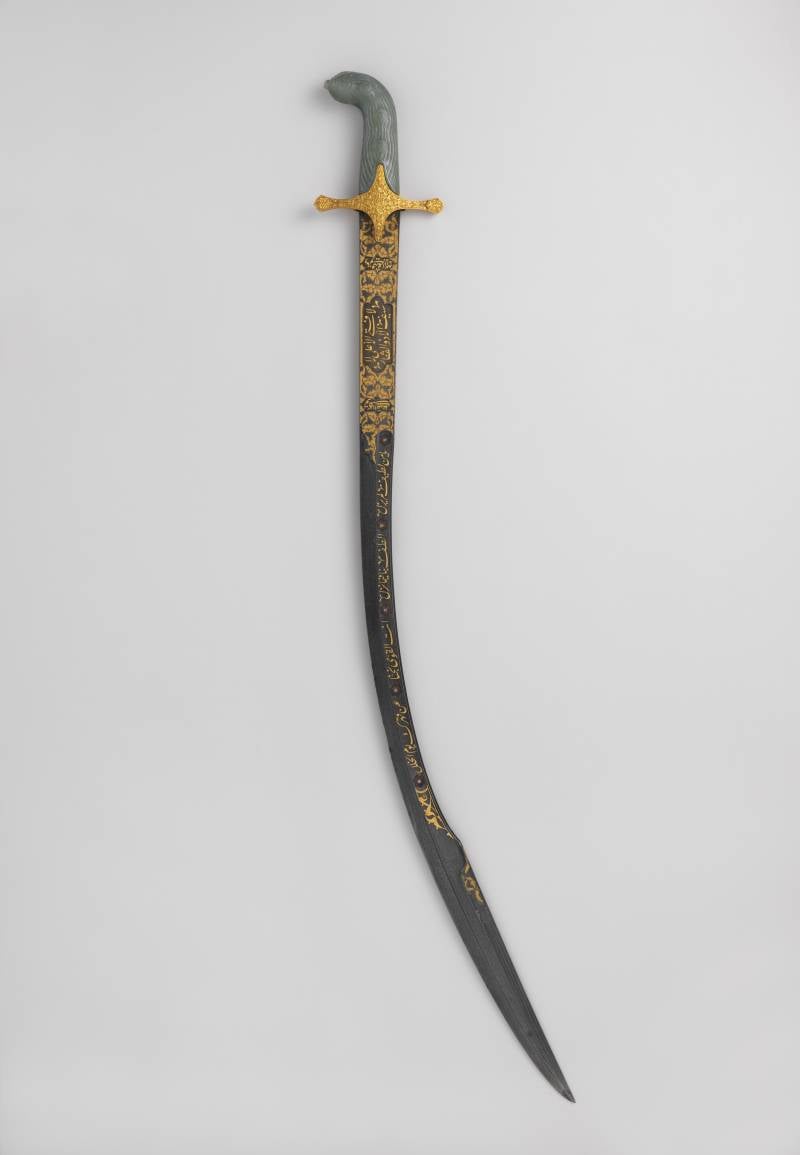 The Mamluk army consisted of three formations, not including recruits and auxiliary units. This is the personal guard of the Sultan, detachments of emirs and free hulk mercenaries. Emir Mamluks were prepared worse than the Sultan, because they were not trained in elite schools. After the death of the emir, they usually transferred to the units of other emirs or became warriors of the hulk. For the service, the Mamluk officers received ikta - land plots with peasants. However, the Sultan could welcome them as a reward and "profitable places." For example, it could be ... a bridge through which a fare, mill or city market was charged. They were exempted from paying taxes, but in case of war they should have brought a detachment of armed people to the Sultan. Iktas were given into conditional possession and could not be inherited by descendants. Under Ayyubids, the detachments of free hulk citizens were also quite prestigious, although gradually their high status fell sharply, and fighting efficiency decreased. Interestingly, by the fourteenth century, anyone who wanted to be a hulk, like the modern Foreign Legion, could sign up, however, this required money, because the person who entered paid the commander a fee. 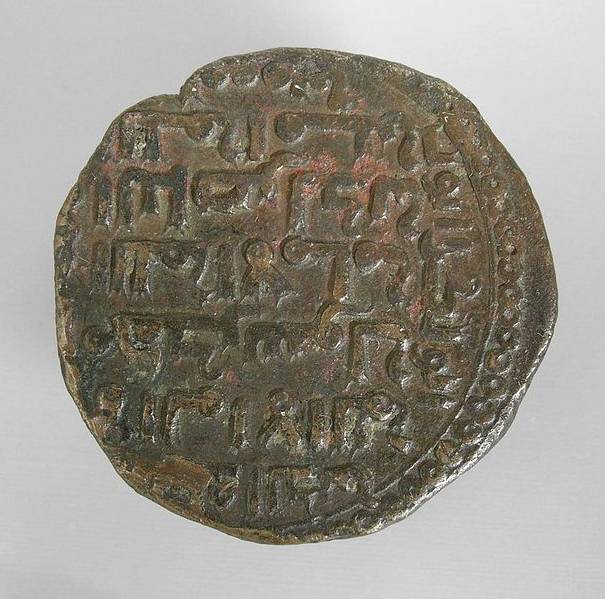 Bronze dirham of the end of the 13th century. (Los Angeles County Museum of Art)

About the number and the money ...

Already in the second half of the 13th century, thanks to the reforms of Sultan Beybars, the Egyptian army numerically increased significantly. It is reported that it included up to 40 000 warriors, of which 4 000 were Mamelukes. At the beginning of the XIV century, the army of the Mamelukes already reached 24 000 horsemen, of which 12 400 belonged to the units of emirs. 13 000 Mamluks and another 9 000 hulk lodged in the province. The emir-centurions had under their command detachments of 1 000 warriors and their own squad of bodyguards in 100 warriors. Then came the emirs who commanded a hundred warriors, and the emirs-foremen. 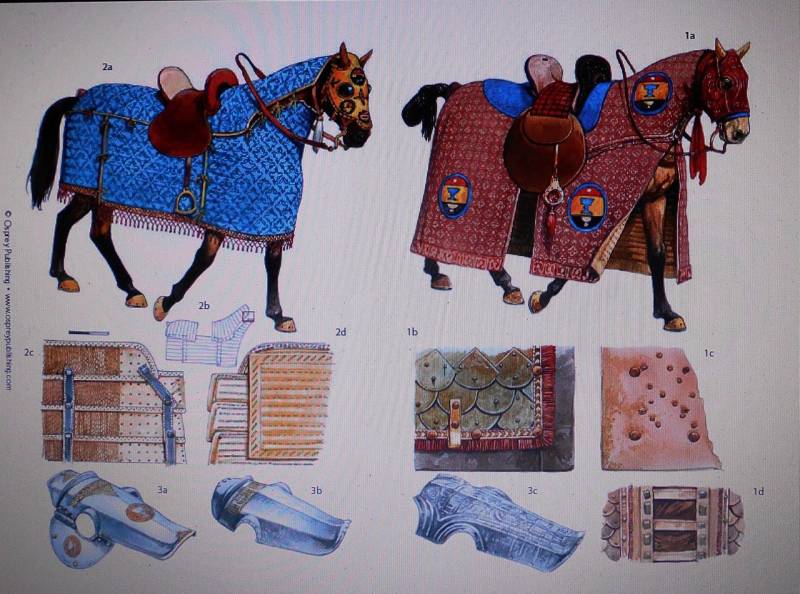 Mamluk horse armor:
(la) Horse armor from the end of the 13th or beginning of the 14th century, consisting of three fabric-covered scaly elements covering the rear, front and neck of the animal. Round heraldic medallions from appliqué fabric are sewn to them. The horse's head is protected by an iron shuffron, consisting of three mounted elements, covered with embossed leather, attached to the iron plates with decorative lacing.
(1 b) Detail of the angle of the horse armor made of scales with the decorative outer layer of fabric removed so that only the bottom three rows of riveted bronze scales are shown.
(lc) The inside of a scale of horse-drawn armor, showing the main leather construction base, large copper rivets securing the edge strip, the heads of three of the four rivets holding each strip.
(ld) Demonstration of the method of joining sheets of horse armor under the neck of an animal.
(2a) Laminated leather armor of the fourteenth century, consisting of five basic elements covering the croup, sides, front part and neck, as well as a three-layer steel shuffron covered with fabric for the head of the animal.
(2б) Schematic arrangement of the main elements of horse armor and their components. The red square indicates the area shown in detail in fig. 2c and 2d.
(2c) Appearance of the indicated upper corner of the chest armor with straps supporting horizontal laminated leather plates.
(2d) The inside of the indicated upper corner of the chest armor, showing a layer of quilted fabric to support this very top of the horse’s armor.
(3a-3c) Decorated steel shuffrons of the 14th century.
(Fig. Peter Dennis) 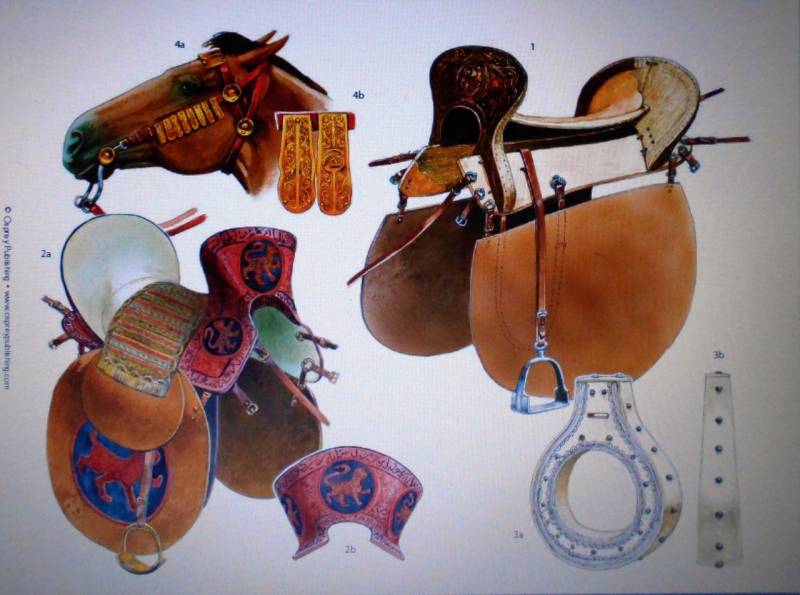 Wanting to strengthen the loyalty of his troops, Baybars significantly increased the salary of his Mamelukes. In addition to monthly payments, they were paid once every six months or a year to buy clothes and equipment, they paid their meat ration daily, and once every two weeks they gave out money to feed the horse. In addition to the proceeds from the granted plots, the Sultan made gifts to Mamluk officers before the campaign, and every new Sultan made the same gifts when he ascended the throne. At the beginning of the 15th century, the salary of a simple warrior was three dinars per month, and the salary of an officer was seven dinars. Some emirs of the hundred horsemen received income from ikta in the amount of 200000 dinars, emirs of forty riders - up to 30000 dinars, ten emirs - about 7000 dinars.

Author:
Vyacheslav Shpakovsky
Articles from this series:
Mamluks. Addition to the popular series “Knights and Knights of Three Centuries”