The fight for the Middle East. Is the US “giving” Syria to Russia?

October 1 2019
19
The withdrawal of American troops from Syria may lead to the fact that Russia will turn out to be the dominant military-political force in the Middle East. This is now worried by many Western analysts, who think that Moscow has "furnished" Washington in the struggle for the Eastern Mediterranean. 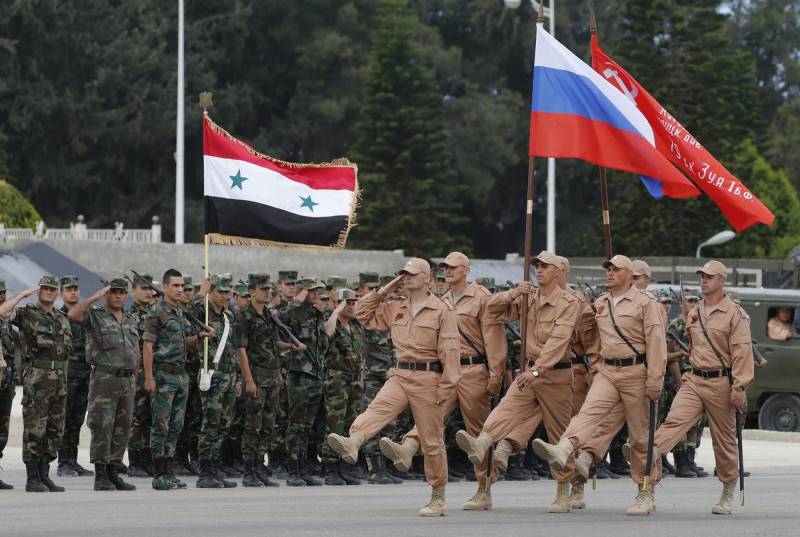 One of the most important reasons for the increased interest of Moscow in the events in Syria was the presence in this country of Russian military bases that allow you to control the situation in the Eastern Mediterranean. For our country, bases on Syrian territory are of strategic importance.

The first important facility is a naval base in the coastal city of Tartus. Officially, it is listed as the 720-th point of material and technical support of the Russian Navy, opened almost half a century ago, in the distant 1971 year. In the post-Soviet period, interest in the base decreased, but then increased again, given the changing political situation in the Middle East and the world as a whole. 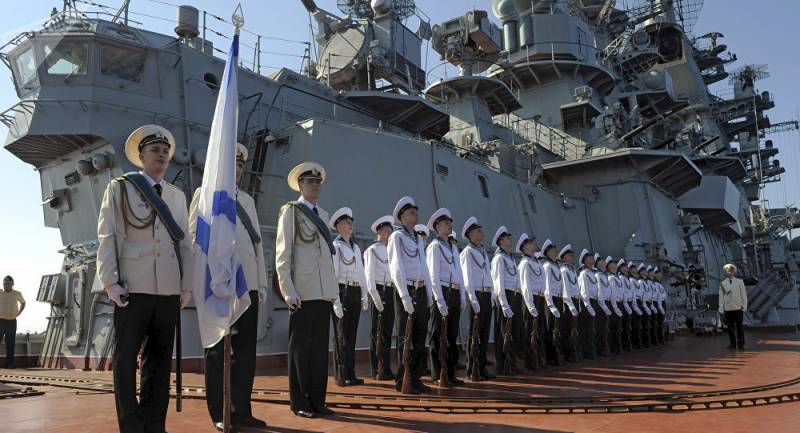 In 2015, the base was modernized based on the needs of providing the Mediterranean squadron of the Russian Navy, including up to 10 warships. The territory of the base has been leased for 49 years, and the lease is automatically extended for another 25 years. Now the base is designed for the permanent presence of 11 warships, including warships with a nuclear power plant.

In 2016, a decision was made to reformat the logistics point into a permanent naval base. Its creation is fully in line with Russian interests in this region, as it allows for the permanent deployment of ships of the Mediterranean squadron in the Eastern Mediterranean. Now the base in Tartus is also actively used by submarines of the Russian Navy.

The second important object is aviation Hmeimim base, which is located in the village of Hmeimim, where the Basil al-Assad international airport is located. Currently, this Syrian air base is used by the Aerospace Forces of Russia. On August 26, 2015, the airbase was donated to the Russian armed forces for free and now there are not only the aviation units of the Russian Air Force, but also the headquarters of the Armed Forces of the Russian Federation in Syria, and the Center for the Reconciliation of the warring parties and the control of the movement of refugees.

The Khmeimim airbase and the Tartus naval base are key points for establishing Russian interests in Syria. Thanks to these bases, the Russian armed forces have the opportunity to operate not only in Syria itself, but, if necessary, in the Balkans and in the Eastern Mediterranean. The loss of bases, which would be almost inevitable if Bashar al-Assad was overthrown by pro-American forces, would be a serious blow to Russian positions in the Middle East. 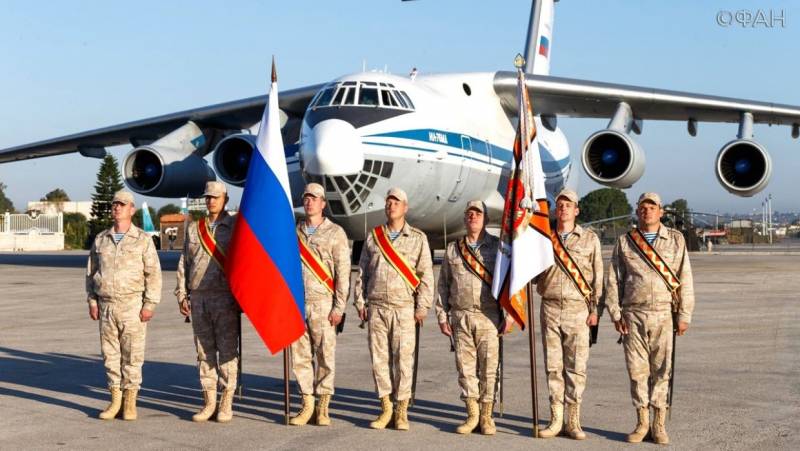 In addition to the Russian armed forces, in Syria, according to numerous sources, there are also the formation of private military companies. They solve a variety of tasks - from security services to participating in special operations against the anti-Assad opposition. Syria has become another “hot spot” where a new model of the use of non-state armed groups has been tested.

By the way, almost all countries involved in the Syrian civil war are turning to such “mediators”. Americans support the Kurdish Self-Defense Forces and anti-Assad Sunni fighters, Turkey helps Sunni and Turkmen groups in northern Syria, Saudi Arabia finances a number of Sunni groups, Iran relies on Lebanese Hezbollah and Shiite armed groups from Afghanistan and Pakistan.

The participation in the conflict of groups and forces formally beyond the control of official governments allows us to avoid responsibility for their actions, and on the other hand, minimizes losses among the personnel of the armed forces, which reduces the factor of public discontent. Indeed, the death of mercenaries or volunteers does not cause such a public resonance as the death of servicemen, especially on the call - they say, people went to fight voluntarily and knew very well where and why they were going, their choice.

The war in Syria and the latest weapons

To a certain extent, the military operations in Syria became grandiose “military exercises”, which made it possible to test new types of weapons in practice, to work out the interaction of various types of armed forces and military branches.

At the same time, the Russian command paid special attention to missile and bomb attacks on the bases of Syrian militants. For example, missile attacks on anti-Assad positions were launched from Russian warships located in the Caspian Sea, as well as from submarines in the Eastern Mediterranean. It was the submarine that was in the Mediterranean that launched a missile attack on Racca, where at that time there were large forces of the anti-Assad opposition.

The war in Syria has demonstrated to the whole world that Russia can act not only by ground forces along its borders, but also use the great potential of its naval and aerospace forces. The attacks from the base in the Caspian Sea on distant Syria showed that for Russia it’s not even necessary to send ships in the immediate vicinity of the war zone - there are weaponallowing you to hit thousands of kilometers.

Thanks to the use of the naval base in Tartus, Russia has the opportunity, if necessary, to control submarine communication cables that connect the Middle East with Europe. In which case, our submarines can destroy the communications infrastructure, thus inflicting a powerful blow to Western countries. By the way, this has long been paid attention to by the command of the armed forces of Great Britain, one of those European countries that are panicky afraid of increasing Russian military-political influence in the Mediterranean region.

Russian-Iranian relations in the context of the Syrian war

The fighting in Syria allowed Russia to establish closer interaction with Iran. In recent years, Tehran has become one of Russia's closest allies in the Middle East.

Iran simply has no other perspective, given the difficult relations with the United States and Western Europe, rivalry with Saudi Arabia and long-standing hostility with Israel. Since Tehran was also interested in maintaining the regime of Bashar al-Assad in Syria, the Iranian and Russian armed forces actually acted together, and interaction mechanisms were worked out.

For Iran and Syria, the Russian military presence has become a guarantee of security and its own troops. Indeed, while Russian forces are on Syrian soil, Israel is afraid to strike at Iranian positions in Syria. Now the Israeli leadership is extremely unprofitable for Russia to deploy a broad air defense system in Syria, since this would completely deprive the Israeli army of the opportunity to strike at the positions of Hezbollah and the Iranian Islamic Revolutionary Guard Corps in Syria.

At the same time, Russia gained wide opportunities for pressure both on Israel, Turkey, Saudi Arabia, as well as on Iran and Syria. In fact, Moscow regained the position of one of the strongest actors in Middle Eastern politics. Now all the parties to the conflict in the Middle East are listening to Russia, since Moscow maintains normal relations with Ankara, and Riyadh, and with Tehran, and with Jerusalem. And the same Israelis are also forced to reckon with Russian troops in Syria. 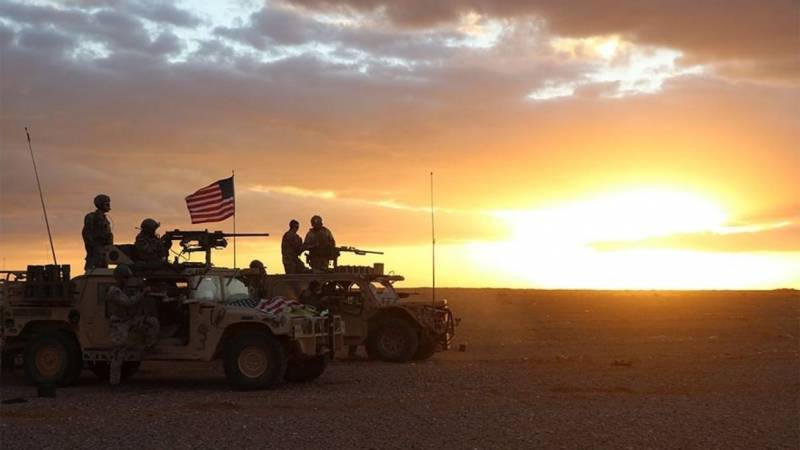 Will the Americans “Give” the Middle East of Russia?

For the United States, the Middle East has ceased to be the "number one point" on the map of the modern world over time. Although the U.S. Army is still present in Syria, Washington is showing less interest in Syrian affairs. If during the Cold War the Middle East was one of the main regions of the world where the confrontation of the two systems unfolded, now the same Asia-Pacific region is of much greater importance for the American leadership.

Now the administration of Donald Trump does not hide the desire to withdraw as many American soldiers as possible from Syria, as well as from Afghanistan. By the way, it was for this reason that serious contradictions arose in the military-political leadership of the United States. Many US military leaders did not want to withdraw from Syria, fearing that it would undermine US positions and allow Bashar al-Assad to end the opposition once and for all.

In addition, opponents of the withdrawal of troops drew attention to a very dangerous situation with Iran and Israel. The presence of the Iranian military in Syria, the activation of Hezbollah controlled by Tehran - all this creates numerous risks for the State of Israel, the traditional US ally in the Middle East. But Trump, despite his most supportive attitude towards Israel, still did not give up the idea of ​​minimizing the American military presence in Syria.

Interestingly, the Americans, who so zealously criticize Russia's relations with Ukraine, do not require Moscow to withdraw Russian troops from Syria, and indeed they react rather sluggishly to Russian support for the Bashar Assad regime. But does this mean that Washington completely abandoned the idea of ​​controlling the Middle East and decided to “give it up” to Russia?

Most likely, we are not talking about this, the Americans simply got very seriously confused in the Middle East, got a lot of problems, and not only financial ones (still spend billions of dollars on maintaining not only their army, but also armed groups opposing Assad, pretty expensive). 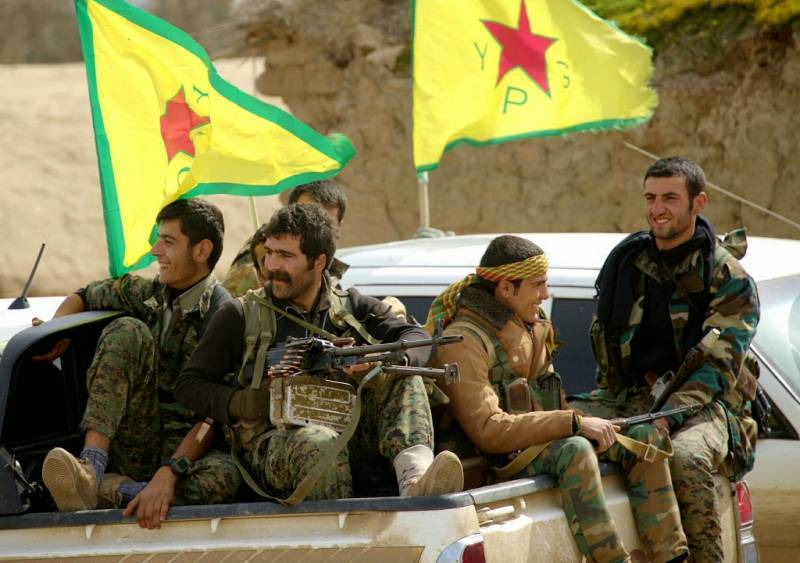 Thus, the support of the Kurdish militia against Assad led to a sharp deterioration in relations between Ankara and Washington - for Erdogan, the Kurds are the worst opponents and any support from the Americans that the Kurdish militia receives, the Turkish president considers betrayal. But Turkey was once considered the main military-political ally of the States in the Eastern Mediterranean!

On the other hand, the United States is well aware that Russia is not interested in significantly strengthening Iran. In which case Moscow itself will stop Tehran. This is also evidenced by the fact that Vladimir Putin and Benjamin Netanyahu communicate quite closely, demonstrate the special nature of Russian-Israeli relations. Therefore, it is premature to say that the United States simply “cedes” the Middle East to Russia.