3 May 2018
98
If the general battle between Russia and the West is inevitable, then it is better to give it in Syria than in Ukraine. 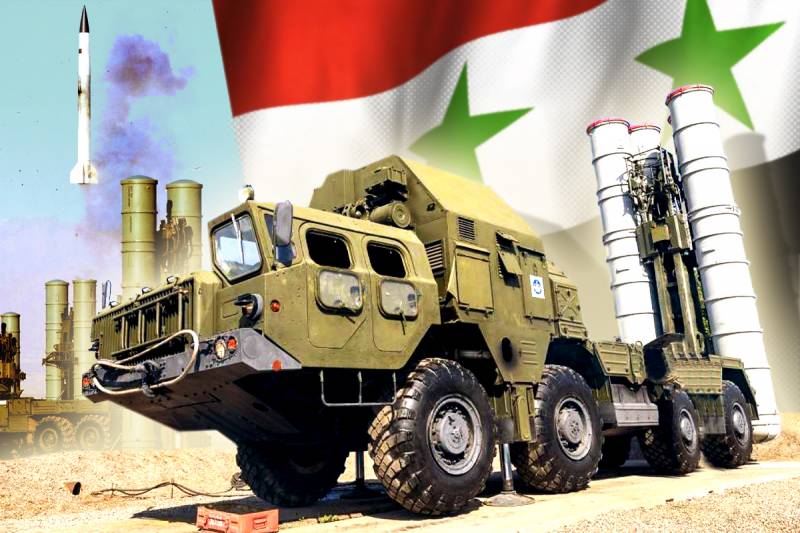 The strong expressions of the American and Israeli military leaders that have sounded in recent days have outlined, so to speak, the framework conditions for the forthcoming Israeli military actions against Syria. US Secretary of Defense James Mattis actually agreed with Israel’s “right” to make “sovereign decisions” on the bombing of the territory of that country. And his Tel Aviv colleague Avigdor Lieberman warned that if during these bombings someone dares to shoot at Israeli planes, then the shooter will be destroyed. Specifically, it was about the C-300 anti-aircraft missile systems, which will either be, or already put into service with the Syrian army.

So, Israel is supposedly ready to bomb C-300 complexes in Syria. How realistic is this?

The first thing to be noted. These objects of attack in Syria, most likely, not yet. Probably, Netanyahu’s recent telephone conversations with Putin were devoted to this sensitive issue. During which the Israeli prime minister was hardly too hopeful.

For the question of C-300 is not so much a military one as a political or even geopolitical one. Especially at this stage of the Syrian confrontation, when both Russia and its other main participants put at stake something more than the operational-tactical results of this struggle. For the United States and the Russian Federation, the question of Syria is at least a question of their global prestige, world influence and wealth of the great military powers. Strategic retreat at this stage is tantamount to defeat, with all the negative consequences of the global level for the losing side arising from this fact.

In particular, for Russia, the question of its military-strategic viability in Syria falls into two related sub-issues. The first is the ability of the Russian Federation to reliably protect the state interests of its main ally, Syria. The second is the combat effectiveness of the Russian troops, as well as the Russian weapons located in this country. Russia cannot, without risk, suffer fatal reputational damage as a competent great power, to allow itself to allow the beating of its Syrian ally with impunity. For all over the world this will be regarded as evidence that the alliance of the Russian Federation is at an extremely low level. Russia also cannot allow its reputation as the world's leading military and armory powers.

It is on the edge of these imperatives that the Syrian air defense system is located, including the C-300 complexes planned for deployment there. At the same time, their non-delivery under these conditions no longer corresponds to the tasks facing the Russian Federation. The Syrian air defense, being limited in its capabilities by the lack of effective long-range air defense systems, will obviously be unable to provide reliable cover for its country and army. Which is equivalent to increasing the threat of military defeat of the SAR. And this, as we noted above, is unacceptable for the Russian Federation. It turns out that the supply of such missiles is a matter of decision.

At the same time, the deployment of C-300 as part of Syria’s air defense should not only significantly increase the security of a given country, but also significantly contribute to advancing the solution to a much larger scale geopolitical task.

The point is that the wide distribution in the world of highly effective air defense / missile defense systems, primarily Russian ones, has the property of exerting a revolutionary effect on the entire world military-political balance. And ultimately the whole system of international relations. The former absolute dominance of the missile and air power of the West, which had a paralyzing effect on the will to resist most countries, ceases to be an absolute value. And practically any country, hiding under a reliable anti-aircraft missile dome, will be able to neutralize the most powerful instruments of the military expansion of the West - combat Aviation and cruise missiles. And, therefore, it will be able to more effectively assert its rights and protect its sovereignty. For the world, most of which has long turned into a disenfranchised military colony of the West, these are really new horizons.

But they may be unattainable if Russian air defense systems in Syria fail. Thus, the stakes are extremely high. And they do not imply half measures or fluctuations on the part of Russia. The situation is best characterized by the well-known Russian proverb: “I took a tug, do not say that it is not a lot!”

In other words, just put C-300 in Syria and count your debt fulfilled is no longer possible. The work must be done in such a way that its outcome is guaranteed to be positive for the Russian Federation. In this sense, of course, it is impossible to fully rely on some Syrians alone. Moreover, they simply do not have a sufficient number of highly trained air defense specialists ready for immediate combat use.

And the enemy may not give time to prepare them. It is precisely because he, too, perfectly understands the true “price of the question”, which we have described above. In the foreseeable future, the West does not plan to relinquish geopolitical peace and give its “burden” to undivided global domination to someone. Accordingly, it is categorically not suitable for what may happen in the world if the Russian defensive military technologies and the Russian geopolitical model will be a success. And Syria is the place where he can try to bury both.

That is why the voices of the American and Israeli defense ministers sound in unison, diligently setting the future battlefield with supposedly legal frameworks. What only emphasizes is for them a new blow to Syria, and therefore to Russia's global position, the question is completely resolved.

Meanwhile, the chances of the Russian Federation and its allies to withstand this blow with honor are not at all zero. The echeloned air defense system created by them in Syria is not as harmless as Donald Trump is trying to portray, waving his arms at press conferences. The West has already tried to influence the balance of the world forces by massive shelling of Syria with the help of long-range cruise missiles. It turned out, to put it mildly, not very convincingly. Up to the disgraceful sending of part of the American "vundervaffe" as teaching aids to Moscow.

Next time, they will probably try to apply a slightly different scheme. In the framework of which the "sovereign decisions" of Israel can be implemented in the form of massive air strikes on Syrian territory. Americans are even profitable. You will not have to put your pilots under fire and risk a head-on collision with the Russians. And Israel, as an expendable material, will completely go away. In the end, Washington is absolutely no difference who exactly will destroy the Syrian air defense. The main thing is for the whole world to see that the attempt to nullify the shock military capabilities of the West failed miserably and the issue of global reformatting was thus automatically closed. And if they are the pilots of the Israeli Air Force, then the flag in their hands.

That's just not the fact that they will succeed. Several C-300 divisions, not to mention C-400, can destroy in a matter of minutes almost the entire enemy air force grouping, even if it includes all the rather large Israeli air forces and not only one. And destroy at distances that completely exclude launches of aircraft missiles. And if something, like the notorious "smart" JASSM missiles, still have time to launch, then April 14 may repeat again. For it is precisely the Pantsiri, the Buki, the Torah, and even the ordinary Shilka that are designed to kill such broken individuals.

And this is not to mention the fact that Israel’s attempt to deliver such a blow, in essence, on Russia's key interests, will certainly be regarded in Moscow as absolutely inexcusable. And then the Russian side may even completely disappear even the minimal motivation to contain Iran. For if someone thinks that the Iranian leadership in itself shows the greatest Stoicism at the sight of dozens of the corpses of its military who died under Israeli bombs, that is badly and fatally wrong. But in Russia, I repeat, patience can also burst. Moreover, she herself in this case does not have to do anything at all. Those wishing to get to the Israeli throat and without it will be quite enough.

So, if Israel is in fact capable of making “sovereign decisions” and not just pleasing Washington, then the legendary Jewish wisdom should tell it that it is better to fly around Syria to the tenth way. For him, this is really a brilliant plan!

Ctrl Enter
Noticed oshЫbku Highlight text and press. Ctrl + Enter
We are
Situational analysis of the death of the MH17 flight (Malaysian Boeing 777), made on the basis of engineering analysis from 15.08.2014Syria: Americans scare themselves, and Asma Asad buys chairs
Military Reviewin Yandex News
Military Reviewin Google News
98 comments
Information
Dear reader, to leave comments on the publication, you must sign in.