April 4 2018
34
The case is moving towards a denouement. Moreover, the denouement is very close. I will even allow myself to make a forecast: in the range from three months to six months, the crisis in relations between Russia and the West will enter a new phase. And it is very likely that this will be an acute phase, extremely painful for both parties. 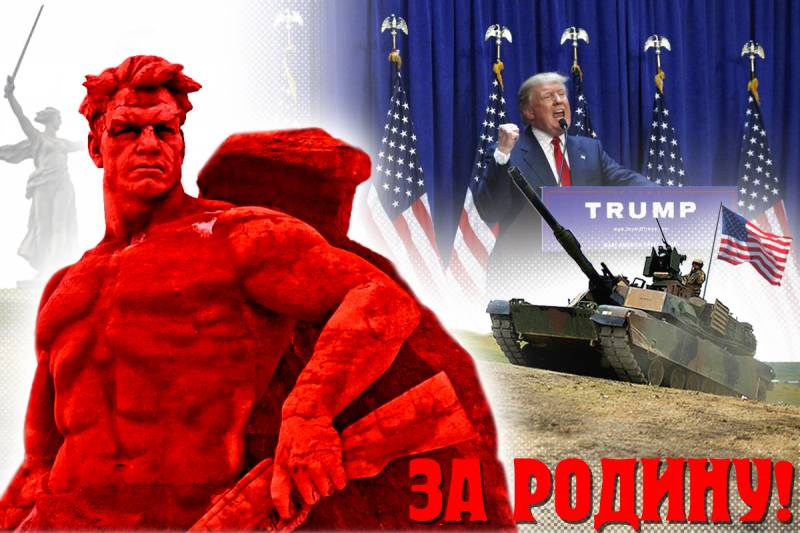 But do not rush to declare me an alarmist: it is possible that the situation will change for the better, and the world will take a couple of steps from the edge of the abyss to which it approached. I will not estimate the probability of any development of events, but I will say that the chances in both cases are quite high.

Why such deadlines? And this is just very simple: only a couple of months are left before the World Cup. And although this event is not directly related to politics, much will depend on whether the United States and its satellites succeed in transferring this event or at least its boycott by several teams.

Moscow has many reasons to make every effort to ensure that the World Championship still takes place in the Russian Federation and is as bright and successful as possible. At a minimum, a lot of manpower and resources were invested in this event, and it would be trite if the efforts spent over a dozen years go to pieces. This is somehow not businesslike, agree?

But the political aspect is also extremely important. If billions of viewers from around the world show another Russia, without gas, the Novice, Russian hackers, “Buryat divisions” and terrible warplanes bombing peaceful Syrian terrorists, then all Western efforts to “dehumanize” Russia and the Russians will go to pieces. But the war is informational, and in a sense for the Euro-Atlantic “Fourth Reich” it will be akin to defeat at Stalingrad.

I have no doubt that the Russian authorities will be able to give the foreign viewer a beautiful “picture” of the World Cup. They disappeared back in 2014, during the Olympics in Sochi. And I don’t even care that in this picture will be pure truth, and that “Potemkin villages” - in the end, disguise and disinformation are quite correct tools for conducting combat operations. I am sure that the experts on the other hand understand this. And if so, they will take more efforts to discredit the Russian Federation before the start of the World Cup.

Therefore, the provocations will continue. And the Kremlin will continue to parry them just as carefully and carefully, in no way increasing the degree of confrontation. At least until the end of the World Cup.
By the way, in this context it becomes clearer why the purpose of the “Novice” was chosen as a traitor living in England. Yes, there are enough such Scripals in America. But the American national team did not make it to the World Cup at all, and now no demarches of the American Football Federation would be of any interest to either Russia or FIFA. But the English team - is another matter. And the team itself is far from the last, and the English championship is considered the best in the world, and spectator interest in the English national team is very large, and the status of the pioneers of football gives them some additional media weight.

Therefore, I do not at all rule out that Skripale was poisoned not by British special services, but by American ones. And it even gives the situation a certain comedy - James Bond was used as a rubber product, moreover, precisely those from whom he least expected it. Although this is a particular, of course ...

More importantly, the provocations will continue. Where and how exactly, one can only guess. But, for example, the Sumerian pirates captured the Russian ship - and suddenly the Russians get furious and fucking at the remnants of the Sumerian fleet? The Russians are furious, but in no hurry to beat. Well, wait for arrivals from the other side - they are sure to follow.

It must be admitted that this tactic is completely win-win for our overseas friends. Either the Russians will sooner or later come across and answer somewhat stronger than they should be. And then “Sentry! Evil orcs offend peaceful elves! We are not going to the World Cup! ”Either they, at that time, will keep silent, and many pseudo-patriotic bloggers and publicists will write again that“ Putin has merged ”, the power is weak and“ the regime can only steal, but give change to the adversary weakly ”. And this, unfortunately, still works - like water, undermining the stone.

But the problem of our "well-wishers" is that there is very little time left. And “informational Stalingrad” is coming from day to day, driving out of the media field the image of terrible Russian orcs preparing to capture the sacred elven Valinor. And it becomes more and more interesting how events will develop after the World Cup, if it, nevertheless, takes place.

It is clear that the Kremlin is quite peaceful. That is, he would have been completely satisfied if the western man in the street, who had seen cute Russian children going to the football fields by the hand with Messi and Ronaldo, had changed his attitude towards the Russian Federation so much that neither Teresa May nor Angela Merkel could change it . And this would have resulted in some reconciliation process - albeit not very swift, but consistent.

Will arrange Moscow and rather long respite. If in the information war we abandon the enemy for at least a couple of years, and Russia will have to start the demonization process again (albeit with strong old yeast), postponing regular sanctions packages for better times, for the Kremlin this will be a big victory, because time will work on it with triple efficiency.

But since we still don’t have to wait for favors from our elves, I’m pretty sure that they saved the most unpleasant tricks for an emergency. And here they may be helped again by our “Nebratians”.

I would venture to suggest that either before the World Cup, or at the very height of the APU, they will nevertheless attempt a major offensive against Donetsk and Lugansk. And Moscow will find itself in a very difficult situation - direct military assistance to the republics will almost certainly lead to the boycott of the World Cup by the main European teams, which almost automatically means its urgent transfer to the same Germany, for example.

Not to support LDNR is also impossible - the risk of their military defeat is too great. And this is unacceptable for us for internal political reasons: I’ll frankly say that, no matter how complementary I am with the current president of the Russian Federation, the option of “exchanging” Novorossia for a beautiful picture of the World Cup will be unacceptable for me as a citizen of Russia. And the Kremlin, I am sure, perfectly understands the possible consequences of such a step, which means it simply cannot help.

And this means that the Western media will still have an excellent reason to “curse” their average person by shoving him a picture of burning Donetsk and “Putin’s separatists” who staged another humanitarian catastrophe in Europe. Will this be enough to completely devalue the positive image results of the World Cup for Russia? I think yes - there would be a reason, and representatives of the “free media” have always been great masters to make a picture.

Frankly, I find it difficult to say what kind of line of conduct would be optimal for Russia in such a development of events. It is clear that specialists of the relevant profile are now working on different options. But whether it will be possible to find a way to keep the Armed Forces of Ukraine from an attack, or at least to minimize its consequences - the question is still open.

On the other hand, there is a fairly high probability that Moscow, disappointed with the political outcome of the tournament, which has invested so much effort, money and patience, will finally decide to slightly change the rules of the game and counterattack in the direction of New Russia, since there are still no positive shifts outlined. In this case, the likely actions of the APU can be used as a starting point. And, responding to the requests of the LDNR leadership for protection, the Russian aviation will finally begin humanitarian bombing of AFU positions, dropping them to Dnepropetrovsk and Kiev.

This is all the more likely that over the past four years, Russia has solved some problems and has consolidated its position where there have previously been very sensitive gaps. This includes food security, and a railway route detouring the territory of Ukraine, and the Crimean Bridge, whose automobile part will be launched in May. Add to this the new weapons recently announced by Putin, which are also a weighty argument in the peaceful diplomatic dialogue, which, unfortunately, we did not have four years ago. Yes, and with the usual weapons it became better - the first rearmament program of the army entered the homestretch, and the Russian troops are now even more combat-ready and equipped than they were in the times of “polite people”.

It is impossible for decades to live in constant, unrelenting tension. And the matter is not even in specific people or politicians - the state machine itself has a tendency to lose momentum in an atmosphere of prolonged uncertainty, when neither peace nor war, but the real difficulties erode the patience of the philistine. And that’s why I’m betting that Moscow is hoping to reverse the situation this fall. This change will be peaceful, or you will have to go a proven way of distributing life-giving "lyuy", it does not depend on us. The Kremlin did everything to steer on a peaceful track. Well, then, as they say, "we will see."

In the meantime, we would have to stand for a day and a night, and wait for the championship.

Ctrl Enter
Noticed oshЫbku Highlight text and press. Ctrl + Enter
We are
Results of the week. "God forbid to see Russian revolt, senseless and merciless!"Bashar al-Assad: In Syria, not the “revolution” that the enemies are talking about, but the revolution of the army and the people against terrorists
Military Reviewin Yandex News
Military Reviewin Google News
34 comments
Information
Dear reader, to leave comments on the publication, you must sign in.