Russia and Syria are waiting for new tests. What is behind the resolution on the 30-day cease-fire? 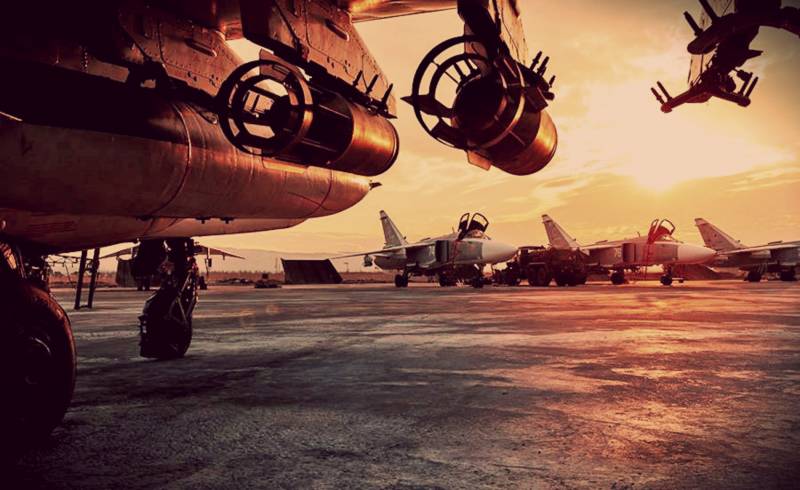 The extremely complex and unpredictable operational-strategic situation that developed simultaneously in three areas of the Syrian theater of operations has reached such proportions that it is sometimes quite difficult to consider in this chaos the transition of the Syrian company to a completely different phase, consisting in testing Moscow and Damascus for political maturity ", as well as the willingness to act in their own interests, despite the multilateral diplomatic and military pressure from the United States and Western European countries.

Apparently, about three weeks ago, the hotheads in the US defense department deeply hoped that the Russian and Siberian armed forces of Syria would leave unanswered an incident with a massed rocket-artillery attack of the United States that were completely stuck in the confrontation with pro-Turkish militants and Turkish convoys HIMARS, "Ganshipov" and "Apache" on the units of the Syrian militia and other friendly forces near the bed of the Euphrates in the province of Deir ez-Zor. The calculation was made solely on the fact that Damascus and Moscow will swallow this spit of our Western "colleagues", and without taking any countermeasures, they will quietly continue to perform the usual Sisyphean work - unceasing local clashes with the pro-Turkish opposition forces (" “Nusra”, FSA) near Hadera, Abu Dukhur and Taybat al-Imam, while the Pentagon will continue to form the so-called “New Syrian Army” (also known as the “Army of the North of Syria”) in Hasek “ backbone "and SDF fighters for future capture of the territories liberated by the government forces. But the first point of their ingenious strategy was not destined to be fully realized.

A very unexpected move by the Syrian leadership and command of the Russian grouping of troops in Syria for the West was the decision to conduct a large-scale offensive operation on the Eastern Guta - the main "green" enclave of militants of the Free Syrian Army in the vicinity of Damascus, which could eventually become one of the bindings links of the Idlib Gadyushnik with the southern opposition enclave of Dar'a, supported by Israel, the United States and Saudi Arabia across the southern borders of the SAR. It is worth noting that the FSA detachments in Eastern Guta are currently controlled by far more than Ankara alone, but also Washington and Riyadh. Why did Riyadh not condemn Operation Olive Branch and support the FSA enclaves? The answer is simple: the SA king Salaman ibn Abdul-Aziz and his entourage have common interests with Erdogan regarding the division of the western territories of the Syrian Arab Republic. Washington wants to grab its big party here, despite maintaining control over the entire eastern coast of the Euphrates.

The offensive on East Guta began with the standard for all assault operations artillery preparation and the application of powerful tactical missile and bomb strikes aviation The Russian Air Force and the Syrian Air Force at FSA strongholds in Nashabiya, Misrab, Ain-Tarm, Irbin, etc., which led to losses among militants and civilians, and also allowed local media to once again present to the general public, a "picturesque" and favorable to the States picture in the style of "Russians and Syrians are lawless and violate human rights." For Washington, Kuwait, Stockholm and the leaderships of other Western regimes, this was a wonderful reason for pushing in the UN Security Council a resolution establishing a 30-day ceasefire in Syria with the possibility of humanitarian operations. Notice when massive Turkish artillery and missile attacks against the numerous cities and villages of Afrin canton began within the framework of the Turkish criminal military operation "Olive Branch", there was no question of a temporary resolution for establishing operational silence; there was only useless accusatory rhetoric from the lips of foreign ministers, as well as other senior diplomats.

The reason why Western states ignored the critical military and humanitarian situation in Afrin is that preservation of the Kurdish canton under the control of the pro-government Syrian Arab Army improves the Middle East alignment for both the current government of Bashar al-Assad and the presence of the Russian Armed Forces in the Middle East and Eastern Mediterranean . But Eastern Guta is an enclave much more important for the West: here, as the last days show, the FSA anti-Assad militants are much more tactically savvy than in the “Idlib Gadyushnik”, and there are hundreds of times more opportunities to influence Damascus due to its proximity . This is what the 30-day cease-fire resolution was worked out in a hurry to give FSA rebels time to rest, replenish their ammunition, regroup and form more tactically effective defensive orders. However, the first "fruits" of this "humanitarian" action of the West under the auspices of the UN appeared already on February 27, when the Free Syrian Army, violating the cease-fire, tried to launch an offensive in the Khazram, Nashabiya and Duma sectors. And this is only the first days since the beginning of the resolution: it is not difficult to guess what can happen in the next three weeks.

One more reason for the emergency convocation of a meeting of the UN Security Council can be considered an unexpectedly significant increase in the fleet of the Russian Aerospace Forces Air Force at Washington Hmeimim Air Force. As you already understood, the arrival at the SAR key military airfield of a link from the 4-s of the advanced Su-57 front-line aviation systems, a link from the 4-x of the 4 ++ generation of multi-purpose fighters, as well as the second A-50U air radar was a direct consequence and countermeasure Russian VKS against the actions of the US Air Force over Deir ez-Zor. The fact is that even one link of low-profile T-50 PAK-FA fighters equipped with advanced passive optical tools (101X Atoll multispectral complex) and radio engineering (Belka complex in passive mode) reconnaissance radically changes the existing power pattern on the Syrian TVD And also A-50U, allowing them to operate without radiation H036 "Squirrel" on the radiation ... All these "unexpected guests", who arrived in the SAR through the airspace above the Caspian Sea, forced the Central Command of the US Armed Forces, as well as the coalition headquarters to carve out at least some time for understanding new operational tactical threats and developing responses. So we have a resolution on the 30-day cease-fire: the “partners” were really alarmed!

Returning to the rather acute topic of the transition of the Syrian company to a new phase in probing Moscow and Damascus for “military-political maturity”, it must be remembered that this 30-day period of the so-called “ceasefire” (neither the Turkish forces in Afghanistan, nor FSA militants in Eastern Ghut) will be spent not so much on carrying out a humanitarian operation as on increasing the military-technical potential of the Western coalition to maintain multiple superiority over the Russian Aerospace Forces and Syrian air defense. On the Afrin front, one can expect to bring the number of armored and infantry “fists” of the Turkish Ground Forces to an even greater ratio, which allows developing the offensive between the complex mountain ranges and the plateau of the Kurdish canton, and especially along the Raju-Tell-Rifat railway line. In the latter case, some Syrian militias from the SNS with RPGs in their hands and ATGMs on jihad mobiles will hardly succeed in protecting Afrin from Turkish intervention; the Kurdish Popular Self-Defense Forces YPG / YPJ will have to send regular Syrian army units, including units of the 5th assault corps, armed not with anti-tank weapons, but tanks T-72B3, D-30 howitzers, MT-12 (2A29) Rapier anti-tank guns and other “heavy buns”. Otherwise, the northern territory of Aleppo province will be completely occupied by the “rats” of Erdogan (FSA, Tahrir al-Sham and other dishonesty).

As for strengthening the capabilities of the coalition through the “Army of the North of Syria” created in the pro-American part of the Rozhava, there is no need to go to the fortuneteller either. First of all, the Pentagon continues to increase the technical capabilities of its own contingent on the eastern bank of the Euphrates with new high-precision MLRS HIMARS batteries and 155-mm M777 howitzers, firing guided Excalibur shells. Secondly, the pro-American cell of the Kurdish SDF detachments in Hasek almost every week is provided with an impressive military load, which includes both the mixed American anti-tank weapons (from TOW-2B to FGM-148 "Javelin"), and modern means of network-centric alignment (tablets and tactical information exchange terminals, digital radio stations, etc.). As you understand, with these Kurds, located on the left bank of the Euphrates, Erdogan will not have the courage to fight.

Regarding the outcome in Eastern Gute, one can only assume the immense probability of provocations using the FSA’s opposition chemical forces weapons immediately after the 30-day “truce”, in which the Western coalition countries immediately accuse the “Assad regime” for the further use of force against the Syrian Arab Army using strategic cruise missiles UGM / RGM-109E “Tomahawk Block IV” of the US Navy and British fleet, as well as the French "SCALP". Indeed, the US Permanent Representative to the United Nations, Nikki Haley, French President Emmanuel Macron and British Foreign Minister Boris Johnson have already expressed their vision of a solution to the conflict in East Ghout in the event of detecting signs of using a nuclear weapon with a missile strike. And, as you remember, signs of its use in the West have learned to skillfully find since Colin Powell’s test tubes and attacks on Iraq. Both Syrian and Russian air defense systems must be prepared for this.

Ctrl Enter
Noticed oshЫbku Highlight text and press. Ctrl + Enter
We are
Situational analysis of the death of the MH17 flight (Malaysian Boeing 777), made on the basis of engineering analysis from 15.08.2014Syria: Americans scare themselves, and Asma Asad buys chairs
Military Reviewin Yandex News
Military Reviewin Google News
29 comments
Information
Dear reader, to leave comments on the publication, you must sign in.