Operation Observer. Is Russia from the front row looking at the clash between Turkey and the USA in the SAR?

February 19 2018
25
Last Saturday, the command of the armed forces of Turkey published a document that refers to the interim results of operations in the area of ​​the Syrian Afrin. The data from this document during his speech at a rally in Afyonkarahisar province was voiced by Turkish President Recep Tayyip Erdogan. He said that during the operation “Olive Branch” from 20 in January, 1,6 thousand representatives of Kurdish armed detachments (in the terminology of Ankara - terrorists) were neutralized in the region of Afrin.
Erdogan:

Our troops cleared terrorists around 300 sq. Km. in northwest Syria.

Moreover, if you believe the data of the report to which the Turkish president refers, the losses of the Turkish troops made 30 people killed, and the losses of pro-Turkish armed formations, which in the summary are called “Syrian opposition fighters” - 60 people.

Further, Recep Erdogan made a statement that pays special attention to himself (quote Anadolu):
Despite the fact that from 18 million sq. Km of land under the control of our ancestors, we got only 780 thousand sq. Km, we do not claim the lands of other countries. Turkey is open to relations with countries ready for partnership. Those who are trying to darken the future of Ankara, waiting for a tough answer.

According to Erdogan, the Turkish army is not going to conquer the territory of a neighboring state, but is trying to “clear it of terrorists”.

Almost at the same time, the son of the President of Turkey Bilal Erdogan, speaking at the opening of the forum to stimulate traditional sports in Antalya, said that the current protracted conflict in the region is associated with such historical fact as a division of the Ottoman Empire. According to Erdogan Jr., "when the once united state was divided, many states were formed, and their borders were drawn without taking into account ethnic composition." Bilal Erdogan noted that this brought ethnic and religious conflicts to the land of the Middle East. After that, the son of the Turkish president accused the collective West of the fact that it was Western civilization that brought the bloodshed and strife into the region, brought for the reason that it considers the right to democracy to be unique to itself, not realizing that any state in the world has this right .

As you can see, both Erdogan made it clear that they remember very well the historical territory of the Ottoman Empire, and draw conclusions from this historical memory, they say. I remember that any historical references to the times of the Russian Empire or the USSR, ladies and gentlemen from Western states immediately accepted as a reason to accuse Moscow of “preserving imperial ambitions” and openly declared that they would do everything to ensure that these “ambitions” did not materialize. Regarding the statements made by the heads of the Erdogans family in the West, there is still a nervous silence, not counting the individual comments of experts and politicians in Germany, France, the USA. What is the reason for collective silence? - Well, if the statements of the same Erdogan ml. If you officially answer and accuse the Turkish army of expansion in Syria, you will have to comment on the likely inconvenient questions about what the "non-imperial" US Army with numerous representatives of private military companies is doing in Syria? ..

Against this backdrop, a meeting was held between the US Secretary of State Rex Tillerson and the President and Foreign Minister of Turkey. As announced, we agreed to search for ways to de-escalate in seriously "sagging" relations between Washington and Ankara. They even agreed to create a joint military contingent in the Syrian Manbij (Membij) area, while Ankara initially appealed to the United States to "remove" Kurdish armed units from there in order to avoid clashes between Turkish and American forces. It is in the area of ​​Manbija that an impressively large American military contingent is located. This is the same area in the north of the SAR, where previously, by agreement with the United States, the Russian forces of the coordination center were also located after the Syrian government army came close to the territories controlled by the Kurds.

The Russian forces, as announced in January, by agreement with Ankara, were withdrawn from the Manbij area, that the Kurds were declared a "betrayal" by the Russian Federation. The very Erdoganov Olive Branch began, during which, as stated, the 1600 terrorists were neutralized. The Kurds call this data "Turkish propaganda", and in the controlled media they note that "the second largest army of NATO" for almost a month has been unable to cope with "several Kurdish formations" in northern Syria.

From the material in the publication "Kurdistan Today":
Fierce clashes take place in 37 villages on five fronts. SDS use partisan methods of struggle. Partisans leave villages during the day due to bombing aviation, and at night they knock out Turkish troops from the villages. The depth of operation of the Turkish troops is limited to a 5-km zone near the border. The population continues to take an active part in the defense of Afrin, despite civilian casualties - 180 people.

The Kurdish military command notes that the Turkish and pro-Turkish forces during the operation in the north of the ATS are losing "hundreds."

If you try to build at least some clear picture out of this information kaleidoscope about the events in the north-west of the SAR, then there will definitely be a fragment on which the following is captured: American troops will take part in the fighting, stationed at Mambidj.

The actual arrival of Tillerson to Ankara cannot really be called coincidence. The fact is that in the north of Syria, already completely geographical Turkish troops, deployed during the Olive Branch, approached the territories that the US troops had previously staked out and were planning to start creating so-called "new border forces." 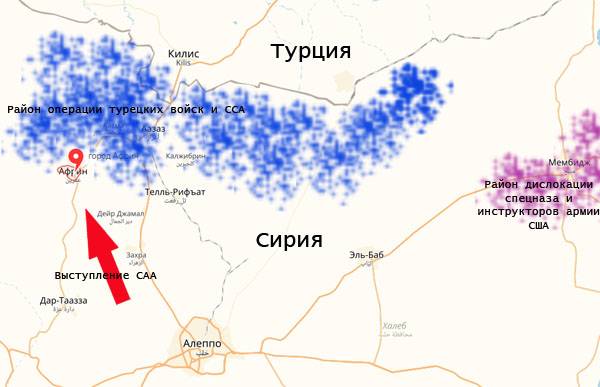 In fact, there were prerequisites for real hostilities between the contingents of the two NATO armies in a third country. It is for this reason that Tillerson "fly" flew to Ankara to attempt to reach an agreement. Or push ... And theoretically they can agree - then a combined NATO military contingent will appear in the north of the SAR, which can be considered the actual loss of its northern territories by Syria and the loss of Russia (at least in the north of the SAR).

But this is theoretically, but practically ... As soon as Tillerson sat down at the negotiating table with Erdogan and Cavusoglu, he was immediately reminded of the Turkish conditions.

Condition one - no YPG, PKK and other “Kurdish abbreviations” with often sticking star-striped ears at the Turkish borders. That is, in fact, the very Kurdish troops prepared by the States are proposed to be thrown into a direct clash with the forces of Bashar al-Assad. Yes, only the Kurds, as they themselves have stated earlier, are not ready to shed blood for lands that they never belonged to, but to make war for their land, including American weapons, ready.

The second condition - Recognition by the United States of the organization of the preacher Fethullah Gülen as terrorist with the simultaneous extradition of Gülen to Turkey from Pennsylvania (USA), where he lives under the auspices of the American special services. As you know, the United States did not go to that before - even after Erdogan’s personal requests to the US presidents (first before Obama, then before Trump) and his visit to the White House. Will Ankara actually put an ultimatum now? There is an opinion that they will not go even now - simply Turkey will be “pressed” by the controlled groups until it finally gets bogged down in its “olive branches” with really hundreds of dead. Meanwhile, in Turkey itself, the next episode of the soap opera about the “undemocratic Erdogan” may well begin, recalling his (and his son's) statements about the “wrongness of the collapse of the Ottoman Empire.” In general, who and to whom ultimatums exhibited - the grandmother said in two ...

And after the withdrawal of the Russian forces of the coordination center from the region of the same Manbij (Membij), Russia in the situation in the north of the country turned into a detached onlooker, waiting for what the internal battles would end with, and who eventually perebodaet. It seems to be good to watch from the sidelines, but ... The announced campaign of the Syrian army "to help the Kurds" in this situation is well regarded as an attempt to return to the "game" in the north of the SAR. After all, if you let everything go to chance, then with the idea of ​​the integrity of Syria, you can definitely say goodbye. And so - with the Syrian military inclusion in the process - it will still be possible to splash the kerosene into the NATO gadyushnik - since we are such “hybrid”, “toxic” and ... as there Russia is also called “partners”. Moreover, Turkey, the United States, has a legitimate zero presence in Syria.

So, the main events in the Syrian north are still ahead.

Ctrl Enter
Noticed oshЫbku Highlight text and press. Ctrl + Enter
We are
Ankara went to unexpected measures in an attempt to beat Moscow and Damascus. Commando and "al-Nusra" in Tayip's cunning planProspects for intervention in Syria. Turks and Saudis are preparing for war or bluffing?
Military Reviewin Yandex News
Military Reviewin Google News
25 comments
Information
Dear reader, to leave comments on the publication, you must sign in.