February 11 2018
51
For the first time in the world stories The naval forces enrolled a full-fledged warship without crew. This is an American Sea Hunter ("Sea Hunter"), designed to search for enemy submarines. People on board are simply not needed. While the robot ship can not open fire itself. But in any case, the descent of the “hunter” into the water foreshadows a revolution - the era of the robot ships begins. 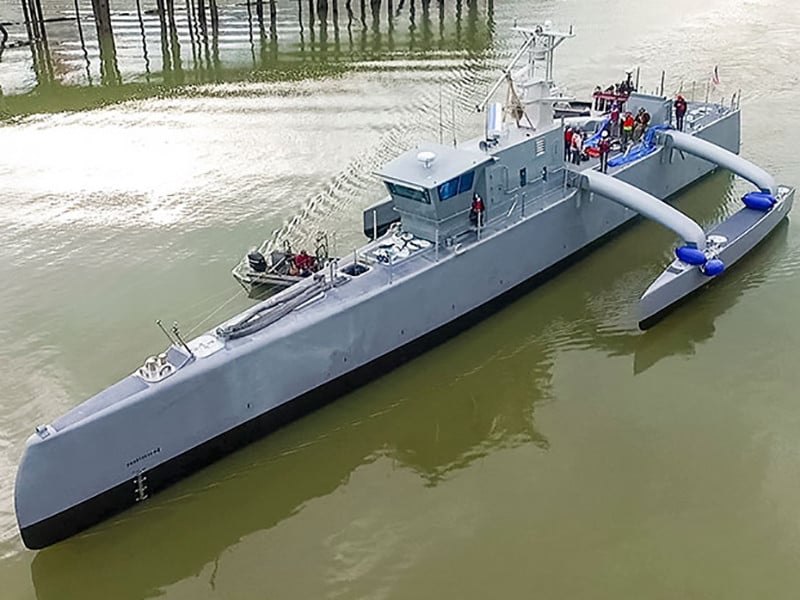 The US Navy officially enrolled a warship on the fully autonomous “Sea Hunter”. The task of the ship, on which there will be no people, is to track down enemy noiseless diesel-electric submarines and sea mines.

The ship was built under the project ACTUV (Anti-Submarine Warfare Continuous Trail Unmanned Vessel). This is an unmanned ship-trimaran, which does not require human intervention in the management and operation of onboard systems, writes the portal Evo-rus.com. The ACTUV displacement is 145 t, of which 40 is fuel. Reportedly, the “hunter” is able to reach speeds in 27 knots and swim by itself in the sea for at least three months.

The Hunter uses cameras and radars to track and locate other ships. While the ship is only a platform for observation, not having weapons on board.

On the beginning of the test "hunter" in the United States reported in May 2016 year. The tests were conducted by the Defense Advanced Research Agency (DARPA). Now, the development of the ACTUV launch will be handled by experts from the Navy Research Department. By the end of this year, as expected, he will begin combat operations, writes The Daily Mail.

Construction of the ship is estimated at 20 million dollars. You also need about 20 thousand dollars a day for maintenance, which is still much cheaper than ships with crews. Experts do not exclude that the appearance of the ship promises a revolution in military and commercial shipping - it can open the way to the development of a cargo vessel without crew.

“In essence, all modern merchant ships operate virtually independently: they are put on the course, and then the course is kept by the onboard autopilot. The crew itself actually provides only the withdrawal and entry of the vessel into the port, ”explained Konstantin Sivkov, Doctor of Military Sciences, captain of the first rank of the reserve, told the newspaper VIEW
“As for the combat drone, this task can really be solved already at this stage of technology development. Of course, there is a connection with such a ship, it is semi-automatic. To search for a submarine for him is real, because all modern sonar systems have an automatic tracking mode for detected targets, ”the expert continued.

“The main problem is that, unlike a ship with a crew, with a drone, difficulties may arise in unconventional conditions. For example, if an enemy submarine maneuvers in an unusual way, when using super-hydroacoustic suppression, and so on, ”added Sivkov.

“I think that such a drone will interact with conventional ships and bases aviation. In principle, this could be a new step in the development of the naval and commercial fleet, but not as a replacement for existing ships, but as an addition. This is fundamental, ”the source said.

“Anyway, there should be people somewhere who will ensure the maneuvering of the ship at the port entrance and at the exit. It will be very difficult for the automatics to do this, it is practically impossible, ”Sivkov explained.

“Similar developments are also under way in Russia. It is known that submarine unskilled ships have been created, whose tasks include the fight against underwater saboteurs. As for this kind of ships, like the Americans, I think the development is underway, but they are not yet advertised, ”Sivkov suggested.

But the deputy director of the Center for Analysis of Strategies and Technologies, Maxim Shepovalenko, is in no hurry to predict a great future for the ship. According to him, the Americans already have the development of solar powered underwater gliders, and the presented development can only theoretically be a technical breakthrough.

“Then we have to admit that the Americans have created a device that provides long patrols on anti-submarine lines. If this is a solar glider, then this is one moment. But if it is built on rechargeable batteries, then you need to see what their power reserve is, ”Shepovalenko told the VIEW newspaper. He is not sure that the current model of the “hunter” can indeed last itself at sea for up to three months.

As the VIEW newspaper wrote six months ago, a robotic surface submarine apparatus of the far sea zone (“Shadow”) is being developed in Russia, a source at the Defense Ministry’s Main Research and Development Test Center of the Ministry of Defense told the Army-2017 international forum.

In Russia, the expert confirmed, such projects are being worked out, but it is unlikely that they are still “at the development stage”.

“Russia also has underwater drones and gliders. There are autonomous crewless boats ",

- The expert said, adding: “But given the priority of the fleet in the system of the military organization of Russia in general and the budget for the state armament program in particular, this is not the highest priority task now. If Americans with such a budget can afford such developments, then they can be envied in a good sense. ”

Shepovalenko does not exclude that in the future unmanned ships will be equipped with weapons. "But people are not inclined to trust them, and there will always be a person to make a decision - as the Americans say, man in the loop." Neither ground or air drones, which are constantly being improved, are still not equipped with autonomous means of destruction, Shepovalenko reminded.

“There are armed air drones, but these are not autonomous systems. It would be correct to call them remotely manned vehicles. In general, it is unlikely that a person will ever be able to fully trust in this car, ”Shepovalenko predicts.

Ctrl Enter
Noticed oshЫbku Highlight text and press. Ctrl + Enter
We are
Commentary on A. Petrov's interview “Fire and Tactics in the Russian Army: Another Look”What you didn't want to know about England
Military Reviewin Yandex News
Military Reviewin Google News
51 comment
Information
Dear reader, to leave comments on the publication, you must sign in.