The experience of fighting in Syria: how the Russians taught the Syrian tankmen to fight 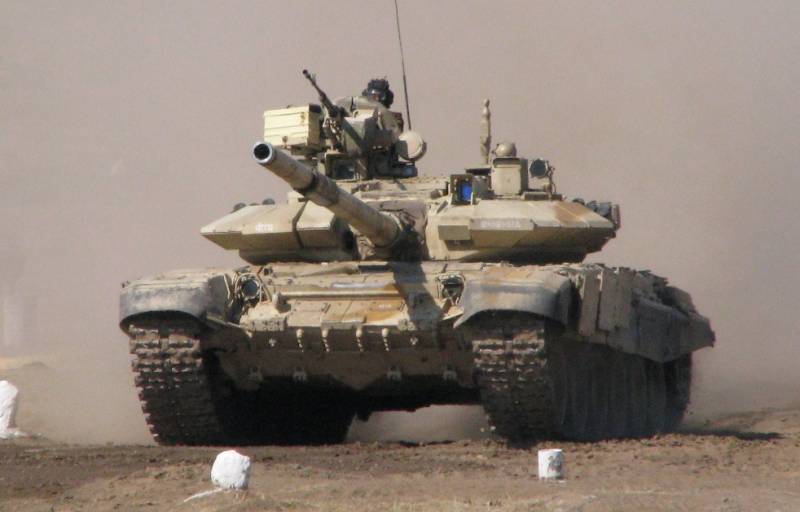 The latest military conflicts in the Middle East once again forced military experts to reconsider their views on the strategy and tactics of warfare. Moreover, the conclusions that were made seem paradoxical at first glance, it is too early to allow the old equipment to be melted down.

What has changed over the past 20 years.

All the recent wars that are being waged on the planet have become conflicts of a new type. Direct clashes between technically advanced powers are unlikely today. Now, the clarification of relations between them turned into low-intensity hybrid conflicts, when the standard situation is the confrontation between the regular army and mobile mobile partisan groups coordinating their actions thanks to modern means of communication and armed portable, but highly effective weapon systems.

For example, anti-tank systems with a tandem warhead today weigh less than 30 kg (and some less than 20 kg) and are able to fight even with tanksequipped with dynamic protection. Moreover, today neither a thick composite armor nor even an active defense system can guarantee invulnerability to a modern tank. 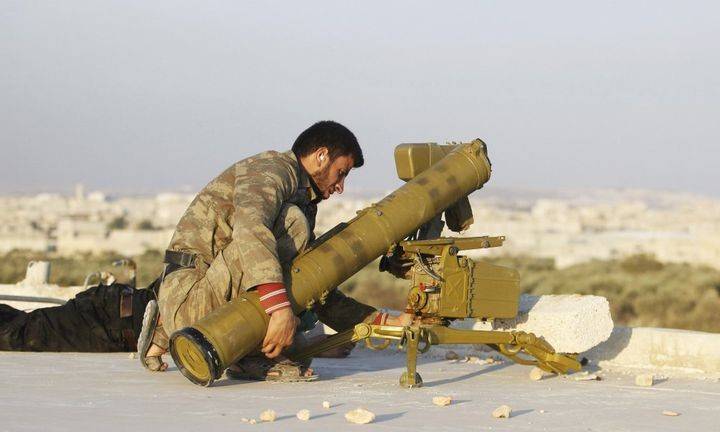 The first bell of change was the Israeli army’s operation against Hezbollah in Lebanon in 2006. The Israelis in their "Merkavah" and could not break the resistance of the Shiite partisans.

Then came the time of Libya, Iraq and Syria. The armies of the local “opposition” that appeared here, as if from nowhere, were able to very effectively fight the regular troops, which were not helped by either an absolute superiority in heavy weapons, or the presence of aviation. Mobile and numerous enemy groups penetrated the army’s positions and delivered short and sensitive blows to it, which it could not oppose.

Libya fell after a short and heroic struggle.

Iraq is more fortunate. IG (banned in the Russian Federation) in the spring and summer of 2014, managed to inflict a complete defeat on the regular army, but it stumbled over the ethnocultural map of the region, and even more about the plans of its puppeteers.

The United States did not have to completely destroy Iraq. They had other plans for him.

But Syria was less fortunate. Bashar Assad didn’t suit either Washington or any other Western “democracy” as a state leader, and he didn’t want to leave in a good way. That is why here the worst war in recent years has erupted.

Stepping on a rake 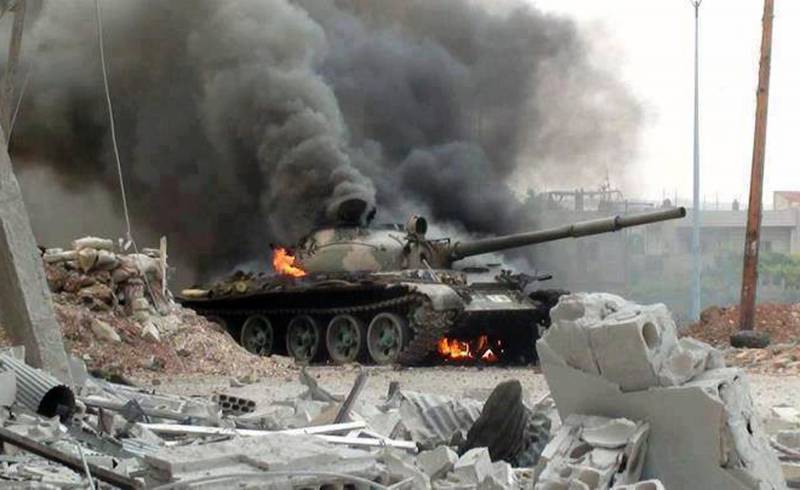 The army of Bashar al-Assad was supposed to die. So she was destined to Washington headquarters maps. So it would have happened, do not interfere with these "damned" Russian, who did not come in time to help the legitimate government. But it was not only the new forces that came from the north, and the new technology that came from there, decided the outcome of the Syrian clash. The most important reason for Bashar Assad winning the war was retraining his army and mastering the skills necessary for survival on the battlefield in the 21 century.

Just do not think that everything happened immediately and suddenly. No, in the beginning it was all very difficult. The very first offensive operations of the Syrian army at the end of 2015 of the year showed that, if nothing was done with the tactics of warfare, there would not be enough strength to further win the war.

The offensive operation north of Hama, on the first day of the operation, turned into large losses of drugs, and then it stalled altogether in the defense of the enemy.

Absolutely ineffective tactics of warfare in urban areas combined with the straightforwardness of the Arab military thinking, which led only to losses and extremely weak progress.

There are no small things in war

The Russians quickly explained to their Syrian allies that there are no trifles in a war. What does not need to wait for some kind of super-weapon that can quickly solve all their problems. They already have everything themselves, it is only necessary to summarize the combat experience and attach a head, and what is not, can easily be brought from the mainland (not without it, of course). 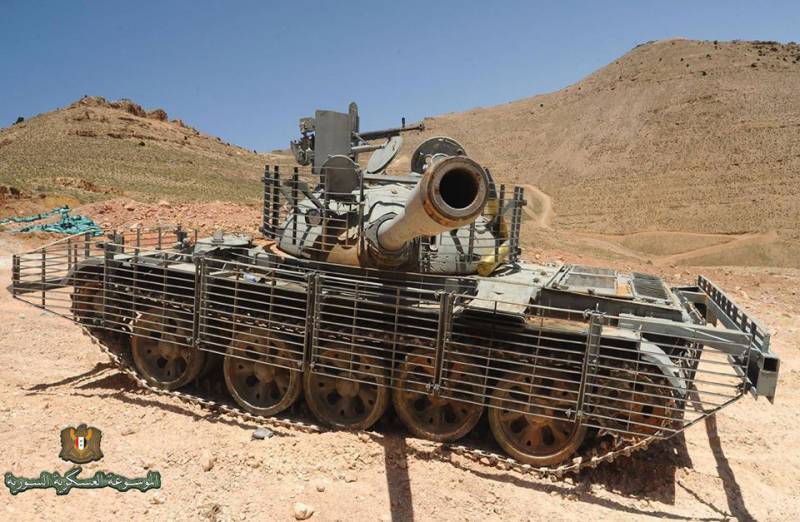 Until October, 2015, the Syrian tanks began to "scald" nets, and on the old T-55 began to appear dynamic protection and a new electronic filling. Yes, little things in the war does not happen. The experience of fighting, including in the Donbas, was used in Syria completely. He defended the sides with a grid - he has already created problems for the enemy. He equipped his combat vehicle, even if not fully effective, but with additional protection, has already reduced losses by half, which means he saved equipment and crews and thereby sharply increased the combat potential of his troops. You see, already in half a year "saved" dozens of combat vehicles "and thousands of soldiers will turn the course of an important battle in your favor.

Good tank, he is a good tank in Africa

Of course, without new and modernized old Soviet technology in Syria has not done. Russian T-72, T-80 and T-90 of the latest modifications were tested in real combat conditions and showed themselves well. No matter how much progress has been made in the development of anti-tank weapons, the filling of modern tanks is also not frozen in the 90's. Tank builders managed to equip modern tanks with new equipment, which allowed them to remain on the battlefield as the main striking force.

As they say, for every tricky “javelin” (they haven’t been supplied to the militants yet) you can always find a no less tricky “blind”, “arena”, ... “Afghan”.

But here we get a very interesting situation. The same new electronic filling installed on such old tanks as the T-55 and T-62, makes these machines a formidable weapon in the hands of their crews. Sometimes in Syria they became more effective weapons than their younger counterparts. 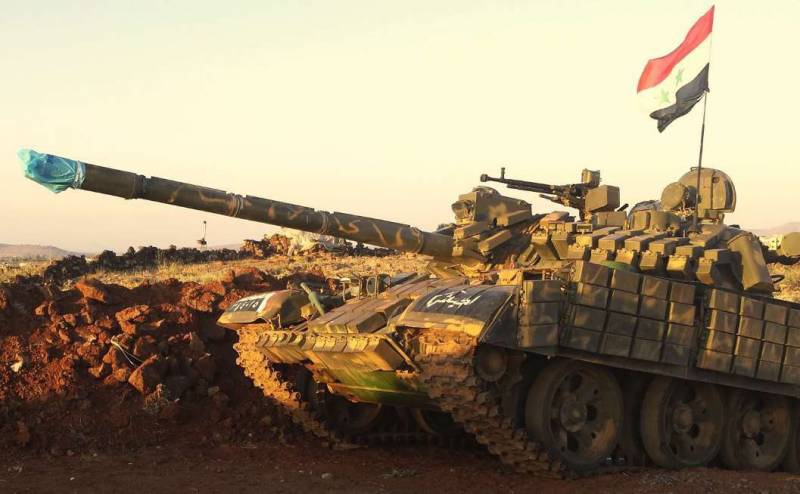 For example, the smaller and more accurate rifled 100-mm gun of the T-55 tank was much more appropriate for the city during urban battles than the long-barreled 125-mm T-72 gun.

That is why the “old men” who did not finish the previous years of the war, having received new, more powerful engines, not only did not disappear, but, having put on dynamic protection and armed with active protection systems, modern SLA and other necessary stuff for today, became very popular among the troops (especially considering their price).

Having a good tank, learn to use it.

The tank itself is not a weapon. Without a crew that can control it, it's just a very expensive pile of metal. Plant her chimp levers, the result will be about the same. Skill crew, the ability to use all the capabilities of the machine - this is another factor in increasing the efficiency of the machine. If you figure out how the Syrians used their equipment in the initial period of the war, you can only be surprised at one thing: how they did not burn them all before the Russians arrived.

Tank attacks in front of the infantry, skating alone, unnecessary stops in the wrong place filled with excessive anti-tank weapons. As soon as the Syrian tankers did not bring their final defeat! I think they would succeed in this if the Russians did not appear and did not explain to them that so normal tank crews who want to return to their families do not act. A certain amount of perseverance, perseverance and some kind of “mother” —and the Syrian army was simply not to be recognized.

It would seem that the people in it remained the same, and the technique was largely the same, but the result was completely different..

For example, already in 2016, some previously unnoticed T-72 take and deceive the "opposition" ATGM. You let him rocket after rocket, but he evades, you know, he does not want to die. Also, Syrian tank crews weaned to work alone. You look at the chronicle and see how a pair of three tanks, covering each other, solve a task that seemed previously impossible for them. And then they went just virtuoso operations. Sometimes it even seems that this is not even the Syrians are fighting, and the aliens from Mars:

By the way, Turkish tankers have not yet learned this simple truth. And that is why so many tanks were lost by them in the vicinity of El-Bab a year ago. And neither the modern stuffing nor the armor saved them. And they do not save, if there is no brain.

There is such a joke in the army. Protection of the tank grows in direct proportion to its speed of movement on the battlefield. But here a joke and does not smell.

According to the federal target program “Industrial utilization of weapons and military equipment for 2011-2015 years and for the period up to 2020 of the year”, approximately 10 thousand units of “outdated” Soviet-made armored vehicles were destroyed. But today, according to the chief of the Main Automobile and Armored Directorate of the Ministry of Defense, Lieutenant General Alexander Shevchenko, this decision has been revised. Utilization should not exceed 4 thousand units. The rest was decided to be restored and handed over to the Armed Forces of the Russian Federation or transferred / sold to allied countries.

The experience of the Syrian battles, as well as this decision, made on their basis, suggests that it is still too early for the old Soviet tanks to “rip off their horseshoes”. In today's troubled world, they will still have the opportunity to distinguish themselves more than once on the battlefield and prove that there is still life in the old dog box.

Ctrl Enter
Noticed oshЫbku Highlight text and press. Ctrl + Enter
We are
Reports from the militia of New Russia for 27-28 September 2014 of the yearAnti-tank missile system AFT-20 (China)
99 comments
Information
Dear reader, to leave comments on the publication, you must to register.