Thunder struck Hmeimim, it's time to be baptized 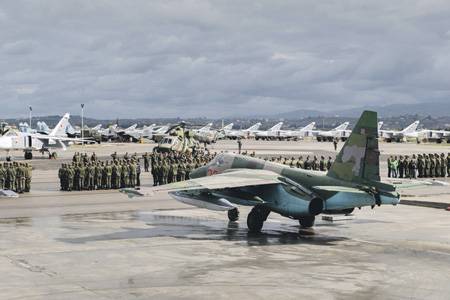 In the last hours of 2017, December 31, until an unidentified guerrilla group managed to quietly approach the Russian air force base Khmeimim on the range of targeted firing from mortars and carry out artillery fire raid, causing significant damage. According to the Ministry of Defense of the Russian Federation, two servicemen were killed. According to media reports, up to 10 Russian soldiers were injured. In addition, six Su-24 front-line bombers, one heavy generation 4 ++ Su-35S fighter, and one military transport aircraft were damaged aviation An-72, one aircraft for air surveillance and aerial photography An-30, one transport helicopter Mi-8. According to the Kommersant newspaper, on top of that, the runway was damaged and the ammunition depot destroyed. And this happened three weeks after the start of the withdrawal of a significant part of the Russian military group to their homeland. Let's try to figure out what really happened and what omissions of the Russian command in organizing the security and defense system of the Khmeimim base could lead to such disastrous results. Let us try to answer another natural question - is it possible to reliably protect this base from repeating similar destructive shelling of other sabotage actions?


ONLY ON THE FIRST VIEW

According to the first vice-president of the Academy of Geopolitical Problems, Doctor of Military Sciences (DVN), Captain I rank of reserve Konstantin Sivkov: “Most likely, the blow was struck on the squares, not targeted, and those who were on guard posts in the area of ​​combat aircraft "(A quote from the material published in the newspaper" The View "). The same military expert believes that a “sufficiently serious artillery strike” was inflicted on the base, and the shooting was not only mortars, but also artillery. By DVN artillery, Sivkov may imply howitzers. But if mortars, say, 120-mm caliber can be transported in the back of a truck, then the howitzer will have to be hauled in tow, and this type of transportation cannot be called covert. In order to conduct shelling by area, it is necessary to use a large number of barrels, and this is the time that takes up minimal position preparation (if this has not been done in advance) and the deployment of guns. It is necessary to clarify the binding to the landmarks, verify the range to the targets and make sure that the targets are where they were supposed to be, that is, we need fairly accurate, relevant data. And this means that the reconnaissance of saboteurs either kept a constant observation of the object, specifying all of the above, or used the data of space reconnaissance, this is impossible without the participation of the Pentagon.

Assume that the howitzers were hidden near the base, in the prepared firing positions, for a long time. In this case, after the shelling, Russian military air and ground patrols were to discover them. But there is no information on this. And the fact that the Russian military did not conduct a search to identify all the circumstances of the shelling and the detection of positions and other traces is impossible to imagine. On the other hand, even 120-mm mortars in an environment where all security services are on their feet are difficult to take away, they are likely to be hidden at a distance of no more than 30 km from the positions from which shelling was fired. 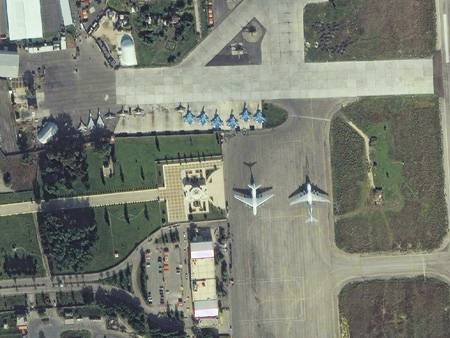 base. Judging by the area covered by mines, several trunks were involved - from three to five. Even if it was assumed that highly skilled artillerymen fired, they could not do without adjustments. It means that the talks should have been aired on the air. The firing positions of mortars were dispersed, so that they could not be destroyed with a single air strike if detected. The interaction of calculations and their management could be carried out only by radio, otherwise they risked being immediately detected.

So it turns out that, on the one hand, a well-prepared sabotage group based on a local intelligence network, and perhaps using satellite intelligence data that only the US could provide, took advantage of the moment and suddenly caused sensitive physical and moral damage to the enemy. On the other hand, poorly organized security, the Russian military relaxed on the eve of New Year's Day and received, in general, the expected "gift." The Russian army must learn to organize the protection and defense of objects from the Russian special units (guarding particularly important state facilities) of the troops of the Rosguard and the Border Troops.

First of all, military counterintelligence was pierced, which did not provide operational cover for the space around the object. Here it is necessary to add the "help" of the Syrian allies, from which, apparently, there is little sense in everything, as they say in Russia, they can neither steal nor punish.

Secondly, the system of protection and defense of the base is built, to put it mildly, sloppy. It seems that even visual observation of the approaches to the object was carried out very badly. Otherwise, sooner or later the glare from the optics of the saboteurs who were monitoring the object would be detected. The security and operational services did not adequately conduct reconnaissance of the surrounding area in order to determine the most dangerous areas and places where it is possible to deploy firing positions of mortars. Here you have to put yourself in the place of saboteurs. In addition to the firing positions, it was necessary to determine in advance the locations of possible approaches and waste of sabotage and reconnaissance groups and to take preventive measures, including mining them with controlled land mines in sections and providing technical monitoring and signaling equipment. In short, the proper security and defense complex was not created.

As for the territory of the airbase, here the puncture was already at the command level, since, apparently, they did not bother to prepare a military base in engineering terms. Neither you have reinforced concrete caponiers for storing aircraft, nor you with blocked gaps for sheltering personnel during the artillery attack.

Former commander of the 4-th Air Force Air Force and Air Defense, Lieutenant-General Valery Gorbenko believes that to protect the base from the ground, the entire territory at the range of a mortar shot must be blocked by patrols and other units. By the way, the patrol is a military outfit, not a unit, forgive the old man for forgetfulness. He also claims that all driveways to the base are controlled (misplaced arrogance), and right there he remarks that there are settlements near the base from which they can shoot at it. But what about the fact that the locals are loyal to the regime of Bashar al-Assad and are inhabited by the Alawites, who, in theory, should resist attempts to attack the base and notify the authorities of those?

This retired general is sure that for a reliable base cover within 10 radius or at least 5 km a large number of troops is needed, completely forgetting about the golden rule: they fight not with numbers, but with skill.

Konstantin Sivkov explained for the newspaper “Vzglyad” that “there are three zones for covering such objects as a military base. The first zone of self-defense provides cover from attacks rifle weapons at a distance within 1,5 – 2 km. The middle zone is a zone of protection from heavy weapons, infantry, mortar attacks. The depth of its cover usually fluctuates within 8 – 10 km. The third, distant, zone covers from heavy weapons, long-range artillery systems. It provides protection at a distance of 30 – 40 km depending on the strength of the enemy. ” According to him, “with the base in Tartus, the same situation as with Hamim.”

Sivkov also stressed: "We built a defense system there, focused on protection against the regular army, that is, powerful air force strikes from the sea and land." But then he made a reservation that it was “not effective enough” against sabotage and reconnaissance groups.

A military pilot, Air Force Colonel, Hero of Russia Valentin Padalka referred to the Afghan experience. According to him: “Kabul and all our aviation divisions, military units were organized by guards right up to the triple ring with different distances from the center of this object.” The first ring had a radius of approximately 1 km, the second, average, - 5 km, the third - about 10 km, also mobile groups were created, which quickly responded to the attack attempts. Padalka indicates that the range of “mortar shelling is usually 3 – 4 km, up to a maximum of 5 km.” In fact, 120-mm mortars can conduct aimed fire at a distance of up to 7 thousand and even more kilometers (the pilot does not have to know this).

According to Valentin Padalki, in the radius to 5 km there should be “no movement, incomprehensible unidentified people”, there should be “an absolutely clean zone”. In the immediate vicinity of the object are settlements, therefore, this recommendation is impracticable. Along the western front of the perimeter of the base there are two busy motorways, on the same side, a little more than 2 km, the seashore. In the east, around 6 km, mountains begin, which immediately was worth determining as the most dangerous course of action of the DRG. What was done is unknown, but the general results of the organization of the protection and defense base on 31 December 2017 of the year can draw conclusions.

In addition to these shortcomings, there are also complaints about the organization of the placement of aircraft for refueling and maintenance vehicles, as well as for the storage of ammunition. Published in the Arabic English-speaking blogosphere images indicate that the planes are open-air and located almost close to each other. Moreover, the bloggers noted that sometimes there is an open placement of ammunition near the aircraft landing area.

It is alarming that none of the Sunni Islamist militant groups claimed responsibility for the shelling. On the contrary, there is information about a certain organization, Free Alawites, which occupies a tough anti-Assad position, and its involvement in the events described is possible. And this suggests a lack of solidity in the Shiite camp in Syria. However, one should not dismiss the version that the allies of Moscow, Tehran and Damascus, may thus have begun the process of gradually squeezing Russia out of the region.

It is certainly possible to organize reliable security for the Hmeymim base, but for this it is necessary to attract intelligent people.

Ctrl Enter
Noticed oshЫbku Highlight text and press. Ctrl + Enter
We are
About Stalin and KhrushchevWhat you didn't want to know about England
66 comments
Information
Dear reader, to leave comments on the publication, you must to register.