The appearance of American ATGM in Ukraine will change a lot 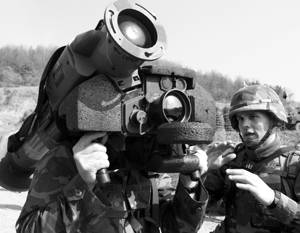 The Pentagon still keeps intriguing how exactly weapons plans to strengthen the armed forces of Ukraine, but in Kiev they hope that it is Javelin ATGM. There is an opinion that even in this case the alignment of forces in the Donbass will not change as much as the Ukrainians would like. But the translators of this opinion do not take into account the main thing - the economy of war.


Reports of the possible supply of "Javelins" APU still cause violent disputes. At the same time, on the eve of the General Staff of Ukraine came the news that the Americans were greedy and decided to send an old anti-tank missile system TOW instead of "Javelins".

Subsequently, a spokesman for the Pentagon said that “so far there are no plans to sell or transfer TOW to Ukraine”. Thus, the intrigue is preserved: perhaps Kiev will receive the coveted “Javelins”, perhaps something else, and maybe, nevertheless, TOW? After all, the word "bye" sounded.

The TOW ATGMs were developed in the 60s of the last century, and for a long time the TOW became the main US anti-tank weapon. It is worth emphasizing that the system turned out to be quite good and is still in service with about fifty countries of the world.

TOWs were used in all armed conflicts involving the United States, therefore it is not surprising that a great many modifications have multiplied. What exactly Ukraine will get is unknown. For example, in Iraq against the Saddam tanks The T-72 Marine Corps used the TOW-2A and TOW-2B. From this ATGM they shot at the sons of Hussein - Kuseyu and Udey. Nobody came to complain. 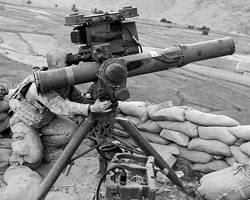 The main difference between TOW and the Javelins is that they are lower class. They need to be controlled and on the wire, and the complex is heavy - you can barely drag it. However, we must remember that the main weapon is a man. Skillfully it is possible to achieve your goals with a chopstick stick. Therefore, it is worth imagining a certain collective image of a certain anti-tank missile system, calling it “Javelin” for simplicity and seeing how the distribution of forces in the Donbass will change with its participation.

Among the observers, two opinions prevail. The first: “Javelins” is a complete nonsense, they are not terrible for Russian tanks. Second: the supply of the Javelins will lead to an escalation of tension and even to the second hot phase of the war. But in any case, the victory will be in favor of the DPR / LPR, since even in Syria, the vaunted Javelins could only light a Russian T-90 bulb. It is emphasized that the tank shoots at five kilometers, and the Javelins only two and a half, that is, the tank will “see” the enemy crews with anti-tank systems earlier and destroy it with the very first shot.

However, everything is not so simple.

In the first Chechen campaign, when Russian troops were only approaching Grozny, the militants of Dzhokhar Dudayev did not pose any real threat - this was the opinion of the Russian Armed Forces command. Indeed, on the outskirts of the city, the Russian army successfully and quickly suppressed individual centers of defense of terrorists.

Especially significant comedic cases. When tanks captured by militants fired from a large-caliber machine gun, the Chechen "tankers" jumped out of the cars in a panic, that is, they had no knowledge of the material part at all. And if a person thinks that a tank can be pierced with a machine gun, that says a lot about his military training in general.

Columns of Russian armored vehicles, famously entering Grozny, destroyed an average of a couple of hours each. Moreover, tanks, infantry fighting vehicles and armored personnel carriers entered the city twice - and both times from the powerful columns there was only a pile of charred metal. What is the miscalculation commanders?

The first blunder is hats and bias towards the enemy. Until now, there is an idiotic opinion that the enemy at the sight of our tanks should scatter in panic. Should not.

The second critical mistake is that the tanks in the city do not fight; they are there purely auxiliary means. Yes, on the classic battlefield the tanks rush ahead, the infantry is running after them, the BMP covers the rear. However, in the city tank turns into a very vulnerable target. And any tanks turn into such a target.

In the city are the first assault infantry groups. Moving forward along parallel streets, they capture buildings to the left and to the right. Their flanks are in contact all the time, so that enemy units cannot penetrate through the battle formations. For the assault groups are single tanks that are guarded by infantry from all sides. These tanks support the assault groups with fire and suppress the indicated targets - guns or enemy machine-gun crews that prevent them from moving forward. And the rear they cover all the same infantry fighting vehicles with infantry.

This is a classic scheme for taking any city, the gold standard. For the “discovery” of this scheme, the Red Army paid tons of soldier’s blood. Suffice it to say that Georgiy Zhukov alone drove two tank armies to Berlin - and almost all of them were killed by the 14-16-year-old German boys from the civil militia.

Chechen militants looked at the world soberly and were well aware that hand-held anti-tank grenades or incendiary bottles like the Molotov cocktail would not do much to help armored vehicles, especially against tanks. Many of their commanders had experience of war in Afghanistan, served as officers in the Soviet army, therefore, they knew the "habits" of the army command and could calculate its actions a few steps ahead.

And, finally, the main thing: the Chechens stocked up with an inconceivable number of RPG-7 hand grenade launchers and rounds of them, both conventional and tandem-type. This decided the outcome of the battle. When the first Russian convoy entered the city in defiance of all regulations and instructions, the militants “classically” knocked out the first and last vehicles from the RPN-7, and then methodically shot the rest of the armored vehicles and personnel.

On that day, tanks could be anything - even T-90, even “Leopard-2”, even “Abrams” or “Merkava”. Machines could be protected by any armor, equipped with at least active, though passive protection in the appendage, in those conditions it did not play any role. Because 7 – 10 RPG-7 shots flew into every car simultaneously from different sides. And if the tank still miraculously moved, the next ten shots turned it into scrap - the militants did not spare the ammunition.

Grenades flew into ordinary trucks, and RPG-7 fired at single tank crews who tried to leave the car through a tower hatch. One of these shots struck the tanker through and did not detonate. The unfortunate burned, half leaning out of the hatch, leaning on the tower and on the grenade sticking out of his chest.

After the disgraceful defeat, when several army units at once simply ceased to exist, the military command turned on the wit. The corps of General Lev Rokhlin, marching "in the second echelon", did not go to Grozny with traveling columns. In order to lure the strike groups of the grenade launchers, he sent his soldiers into ambushes, and then imitated the entry of the next armored column of "fools".

Here pride played a cruel joke already on Dudayev’s. Since the rating of the Russian army among the militants did not rise above the baseboard, many rocket launchers fell on the Rohlinsky ploy. Hearing the clang of the caterpillars and the roar of the engines, numerous groups of Dudayevites, loaded with RPG-7 shots, began to flock to the road, and invariably were ambushed by Rokhlin from Volgograd, and then destroyed. This trick allowed the units of the Russian army not only to exterminate significant forces of anti-tank units of terrorists, but also to advance into the city.

Along the way, it turned out that a tank was too bulky a weapon. He constantly needs care, like a rich uncle. The most maneuverable infantry fighting vehicles and armored personnel carriers in street battles can bring significantly more benefits. So, virtuoso drivers from the Maikop brigade in their BMP dodged a dozen or more shots from a grenade launcher during the battle.

Thus, if you have a well-trained team of grenade throwers, a sufficient number of RPG-7 and ammunition to it, and an arrogant enemy moves tanks through, this at least balances the opposing forces.

One shot from an RPG costs about 20 thousand rubles, the pipe itself is about 40 thousand. Suppose you need to spend ten shots on every tank to ensure it is destroyed - these are 200 thousand rubles.

At the same time, the old and simple T-72 is estimated at five million rubles. T-80 costs over one hundred million rubles. For T-90 will have to pay no less than 174 millions. Mass BMP-2 and BMP-3 stand like a new tank - about 170 millions. Even if we spend more than a dozen RPG-7 shots on the destruction of a tank or BMP, the proportions between the damage inflicted on the enemy and the cost of applying it speak for themselves.

Comparing RPG-7 and Javelins is not entirely correct. RPG-7 is a melee weapon, ambush weapon and firing round the corner in the back. The Javelins are a weapon of a classic battle, when two full-fledged armies clash face to face in the open field and begin to eliminate differences on the agrarian issue. But while we are discussing only the cost and mass use of weapons, such a comparison is quite appropriate.

So, the Javelin complex with six rockets in the set costs 91 a million rubles. One shot costs about six million rubles. The firing range is two thousand five hundred meters. What is important, the complex does not require support of the target after the shot, that is, it fired and forgot, and even better - ran away until you were remembered on the opposite side. The rocket itself finds the target, makes the so-called slide - takes off higher and from there falls on the tower of the enemy’s armored vehicles. The top of the tower, feed - all this is traditionally the weak points of any tank.

According to some reports, only in service with the army of the DPR costs about 800 tanks. Suppose all these machines are equipped with the most advanced protection technologies. But even if for each tank to spend five Javelin missiles (which in itself is excessive and excessive), it will pay back with interest. How many missiles will be needed in the end, you can find out only in a practical way, but arithmetic persists: the more such complexes will be in the anti-tank units of the Armed Forces of Ukraine, the better for them. Even if happiness is not in the Javelins themselves, it is in their number.

If the suppliers are not stingy and every soldier will shoot at least 20 – 30 missiles in the training manual, this is quite enough to multiply the LDNR armored forces to zero as soon as possible.

How can air supremacy be destroyed Aviation enemy, so you can achieve superiority on the battlefield, destroying all armored vehicles. At the same time, engaging in expensive tank battles is not necessary.

Ctrl Enter
Noticed oshЫbku Highlight text and press. Ctrl + Enter
We are
A great interview with Sergey Lavrov: about Ukraine, Obama and IranWhat you didn't want to know about England
90 comments
Information
Dear reader, to leave comments on the publication, you must to register.