Stunned the West: "Where did the Russian submarine go?" 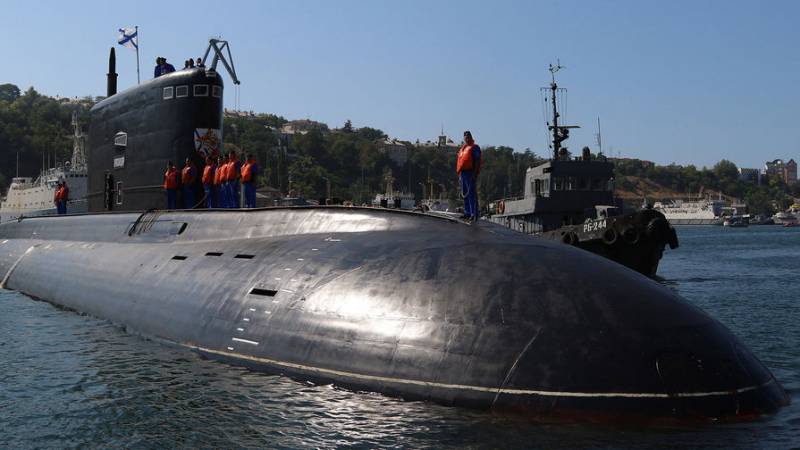 The large-scale State Armaments Program-2020 gave a serious impetus to the development of the domestic defense industry. The war in Syria, however, “made an excellent advertisement” for Russian-made weapons. In the conditions of the difficult economic situation of recent years, it is precisely the products of the military-industrial complex delivered for import that can become one of the key “points of growth” for future development. But for this you have to win the competition from serious rivals.

The war in Syria has made a powerful advertisement for Soviet and Russian weapons. Even the obsolete weapons and military equipment of Soviet designs again showed their high combat qualities, unparalleled reliability and became extremely popular on the secondary arms market. If we describe the impression of our Western partners from the Russian army in Syria, then it can be described only in one word - “stunned”.


Nevertheless, despite the obvious military successes in Syria, Russia in the near future, it is imperative to switch to a new production model and acquire its own promising technologies.

The country needs to become a world-class intellectual and technological center and, “cutting corners of development”, to overcome the gap from the leaders, immediately find themselves at the origins of the new technological revolution in the next cycle of development of human civilization.

The locomotive of structural changes in the economy can be the defense industry of the country. And the Syrian campaign is a more than convincing example of the effectiveness of the domestic defense industry.

During the 2015-2017 years, during the fighting in the Syrian Arab Republic, more than 200 samples of weapons and military equipment were tested and tested by the Russian Armed Forces. Basically, the weapon confirmed the stated tactical and technical characteristics.

However, more than ten samples still had to be abandoned. They did not stand the test of real combat.

However, there are many more positive examples. In particular, the upgraded high-precision 152-mm shell "Krasnopol" showed confident hits in the "jihad mobil" militants at a distance of over 15 km. Adjustable aviation KAB-500 and KAB-1500 bombs hit terrorist targets with a miss within a meter. One of the Russian tankers using modern means of navigation and target designation in a night battle destroyed six tanks jihadists.

In the course of the Russian submarines firing missiles of the “Caliber-Submarine” type, our submarines in the Mediterranean were simply surrounded by NATO ships, which closely monitored the launch, the coordinates of the Russian Defense Ministry launches to the partners in advance.

To launch missiles, Russian submarines carried out the ascent, and then sank. And after that, the observation vehicles of NATO ships almost immediately lost them in the depths of the Mediterranean.

There was just a hubbub on the air: “Where did the Russian boat go? It's just a black hole! ”

As for Russian tanks, small arms, equipment of special operations forces soldiers, we can say this: something in Syria has been brought up to the requirements of modern combat, much has been created from scratch and in the long run, and some of the previously lost has been recreated again. In addition, a great experience has been gained in the destruction of all types of improvised explosive devices, especially large gas cylinders filled with trinitrotoluene.

After the war in Syria, the flow of orders for domestic aviation, naval and armored vehicles, small arms and robotics increased sharply. Currently, there is just an incredible boom in demand for Su-34 aircraft.

Some countries have begun to restructure their conceptual approaches to the construction of the armed forces based on the experience of combating international terrorism in Syria.

Moreover, they are beginning to imitate us, even in the organization of army games. Suffice it to recall the NATO tank biathlon of the Strong Europe Tank Challenge, which took place from 7 to 12 in May at the training center of the Training Command of the 7 US Army in the German Grafenwehr (Grafenwoehr). However, the scale of the event is incomparable with the similar Russian biathlon.

Russian weapons continue to enjoy the traditionally high demand abroad, and Syria has contributed to this to a large extent. Against this background, it is important to note that only two countries in the world produce the entire line of modern weapons - this is Russia and the United States.

Recently, there has been an increase in purchases of military aircraft, including helicopters, air defense systems, and marine equipment, on the world arms market. To 2025 in the structure of the procurement of weapons and military equipment, according to experts, aviation will occupy 55%, and the following marine equipment - only 13%.

At the same time, there is a growing competition in domestic arms from China, India, South Korea, Brazil and even Belarus. However,

Among the priority buyers - China. This country was the first to receive the Triumph C-400 SAM and Su-35 aircraft.

The traditional buyer of Russian weapons is Vietnam. But there, Russian manufacturers are already facing tough competition from the US, Israel and 20 of other members of military-technical cooperation.

In order to bypass competitors in Vietnam, and in the Asia-Pacific Region, and in general in the global market of weapons and military equipment, our country needs to focus on high-tech dual-use technologies, that is, applicable in both civil and military fields. This will largely optimize the cost of their creation.

The scope of such technologies is nuclear (in the future and thermonuclear) power engineering, robotics and artificial intelligence, aviation and space industries, engine building, materials science, automatic control systems, biomedicine.

In fact, this is the base of the real sector of the economy, which is based on the "dual-use" technologies of the Russian defense industry. This way of development of the domestic industry seems to be the most optimal today.