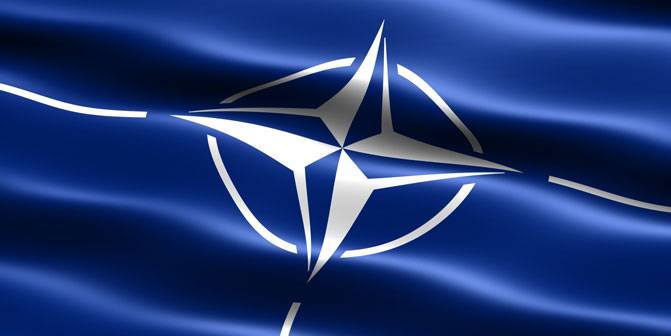 The North Atlantic Alliance was born of the myth of a Soviet military threat to Western countries. The myth of the frightening East is certainly not new. Echoes of the Turkish siege cannonade under the walls of Vienna for a very long time spread throughout Europe. Just in time, the place of the bloodthirsty janissaries in the European imagination was occupied by the communists (perhaps, it is a matter of red banners and sickles?). Traces of this metamorphosis of public consciousness are noticeable even in Winston Churchill's famous speech in Fulton: "With the exception of the British Commonwealth and the United States, where communism is in its infancy, the communist parties, or fifth columns, represent an ever-increasing challenge and danger to Christian civilization." Note that the "Christian civilization" before Sir Winston was actively defended by another European leader: "The Reich government regards Christianity as an unshakable foundation of morality and a moral code of the nation ..." This is from Hitler's speech in the March 23 Reichstag. With the fears of this defender of Europe, too, everything was predictable: "... the Jewish-Bolshevik rulers in Moscow unceasingly attempted to impose their domination on our and other European nations ..."

The irrational, subconscious fear of the European towards the eastern hordes, which found bright artistic expression in Tolkien in The Lord of the Rings, crystallized into the creation of a strong military structure on the globe. Karl Marx prophetically noted that "a theory becomes a material force as soon as it takes possession of the masses." The myth of the threat from the east embodied in quite tangible combat aircraft, Tanks and ships ...

At this point, many readers brought up in a well-defined and rigidly defined information matrix, of course, should give vent to their righteous anger. In fact, didn’t the military threat from the USSR exist at the time of the emergence of NATO? In order to answer this question and not slip into a meaningless argument, we turn to elementary historical the facts.

The Alliance was created in April 1949. In 1949, the United States had atomic 200 bombs and 447 carriers (strategic bombers). Why is it important? Because during the creation of NATO, the participating countries signed the so-called "defensive North Atlantic Pact", containing a strategic plan for offensive operations, which envisaged an attack on the USSR with the help of US air forces and the use of nuclear weapons. The test of the first Soviet atomic bomb took place on 29 on August 1949 of the year, that is, almost six months after the creation of a "defensive" alliance. And the first squadron of 22 Tu-4 bombers designed for atomic weapons was created by Russians in the autumn of 1951 of the year. By this time, the US had already 569 atomic bombs and as many bombers for their delivery. And who provided a military threat for whom ?!

Facts are a stubborn thing. Within two years after the creation of the “defensive” alliance, the West could practically destroy the Soviet Union with impunity. In the future, the imbalance only intensified. Aviation The United States could strike at the USSR, as they say, from four corners of the world. Before the advent of intercontinental ballistic missiles, the situation was as follows: the United States in 1959 possessed 1551 carriers and 2496 bombs, the Soviet Union had 108 carriers and 283 bombs. That is, the difference in combat potential was already by orders of magnitude. Faced with the fact of the absolute impossibility of surviving in a purely defensive war, the Soviets developed a military doctrine that takes into account both their great potential in the field of conventional weapons and the Western mentality. In the event that preparatory measures for the NATO armies for the war were discovered, Moscow was supposed to carry out lightning-fast "blitzkrieg" by tank armies to the English Channel. The calculation was made that the Americans would not dare to strike with atomic weapons on the territory of occupied Western Europe. However, such a plan quite predictably caused panic in the West, and the escalation of tension reached a new level.

The internal logic of ideological confrontation inevitably had to lead to a quite materially expressed conflict. And it almost happened in 1962 year (the Caribbean crisis), putting humanity on the brink of disaster. In the USSR, it was decided that if a purely defensive NATO unit could deploy ballistic missiles in Turkey, then why not place Soviet ballistic missiles in Cuba? Further everyone knows. The horror was who such crises were inevitable in the future. The original myth gave rise to religion, and its priests require regular sacrifices. And let's be honest with ourselves: the entire civilized world was able to breathe a sigh of relief, not because it was defended by a military-bureaucratic alliance, but because Mikhail Gorbachev came to power in the Soviet Union in 1985, ending the Cold War and giving freedom to Eastern countries Of Europe.

What was the reaction of NATO? This is truly amazing. On the one hand, having completely despised the oral promises made to Gorbachev, the bloc made a tremendous expansion eastward, coming close to the borders of post-Soviet Russia. Today, this territorial expansion by many professional military and political experts in the US and the EU is recognized as an erroneous decision. But be that as it may, the matter was done, and this determined the attitude of the overwhelming majority of Russians and their political elite towards the alliance. Doubts about the true intentions of the West, if they existed, were completely dispelled, and the Russians pulled out the concept of Emperor Alexander III from the dusty closet of history, proclaiming that her army and navy were the only friends of Russia in the world.

On the other hand, the paradox was that, despite the expansion of the territorial, no significant military gain of NATO in the 90-s and at the beginning of the 2000-s did not happen. The terrible military adversary disappeared from the horizon, overwhelming his fields with rusting tanks that did not wait for a breakthrough to the English Channel, and there was no longer any special meaning in the “European shield”. Just look at the dynamics of the military expenditures of the European member countries to verify this. Military budgets were cut so intensively that at the time of the recent “aggravation of friendship” with Moscow over Ukraine, it turned out that, for example, the German Bundeswehr was practically inefficient. Now the prolonged post of European generals is over, the sound of spurs and glasses can be heard from Brussels, and in the general staffs the atmosphere of anticipation brings to mind the film “Big Grub” by Marco Ferrere.

What are the prospects for the North Atlantic monster that has suddenly found a second wind? Based on the realities that we see today, in the near and medium term, it seems likely that some geopolitical transformation of the alliance. On the one hand, consistent and quite feasible steps are underway for geographic expansion. At the second stage of integration (individual partnership plan) are now Azerbaijan, Armenia, Kazakhstan and Moldova. At the third stage (accelerated dialogue) - Georgia, and Macedonia, Ukraine, Bosnia and Herzegovina entered the final straight (action plan for membership). Some dynamics are noticeable in the case of the previously neutral Sweden and Finland, which are increasingly actively establishing military cooperation with Brussels.

But in this barrel of honey there is also a fly in the ointment. The situation in the conflict of NATO - Turkey is getting worse every day. Kemalist Turkey, traditionally controlled by the army elite, was a loyal and obedient ally. But this Turkey is no more. And there is Turkey, ambitious President Erdogan, who sees his country as the leading regional power, independent in making decisions. Its “emancipation” has already reached the acquisition of Russian air defense systems that absolutely do not fit into the architecture of the NATO system. What will result in such a confrontation, no one can say with certainty. It is likely that the alliance will have to look for a new air base instead of Incirlik.

In any case, it can be stated that the military-bureaucratic monster, born of Europe's hidden fears, long ago broke away from the umbilical cord of the myth that gave rise to it and began to generate independent meanings and discourses. NATO membership, as we have shown, initially had nothing to do with real security issues. The United States, which possessed an atomic combat potential that exceeded the Soviet system by an order of magnitude, would be able to guarantee the protection of Western Europe without any organizational structure. On the other hand, today a number of participating countries (Latvia, Lithuania and Estonia) with all the military assistance and support provided to them will not be able to resist the Russian army for more than a week.

Thus, it is not necessary to look for meaning in the emergence and existence of NATO from the point of view of European security. This is a kind of prestigious club. A person can buy whiskey in the store is much cheaper, but he will go to overpay for him in the club, because it improves his status in his own eyes. Approximately it is now engaged in the member countries of the alliance.

Ctrl Enter
Noticed oshЫbku Highlight text and press. Ctrl + Enter
We are
How can Russia survive and win in the 21st century?Russia: the Moon, Mars and further everywhere ... Speeches of the participants of the Izborsky club in the corporation "Rosobschemash"
7 comments
Information
Dear reader, to leave comments on the publication, you must to register.