December 4 2017
94
Harsh criticism of the manufacturers of Russian helicopters was heard from the mouth of not just anyone, but the former commander-in-chief of the VKS, now the head of the Senate defense committee. “The pilot doesn’t see anything, the pilot doesn’t hear anything,” Victor Bondarev describes problems with the avionics of the Mi-28 helicopter. And this seems to be just the tip of the iceberg. The problem concerns not only combat helicopters. 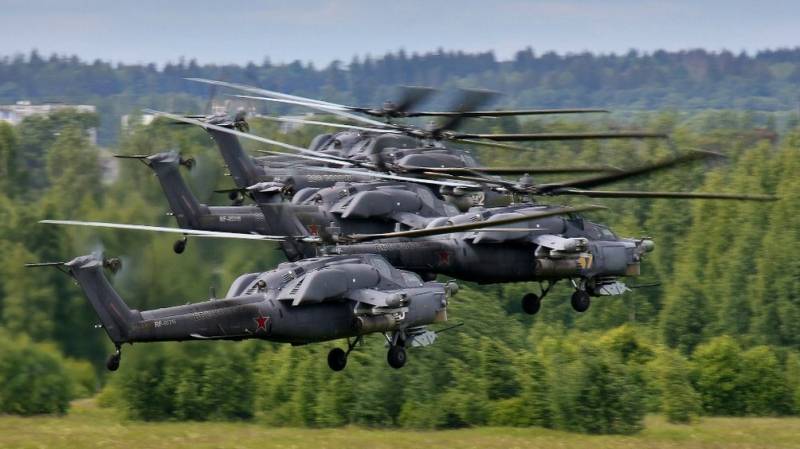 The head of the Senate Committee on Defense and Security, former commander-in-chief of the VKS, Viktor Bondarev, said that the Russian “defense industry” had corrected a number of flaws in the Mi-28 “Night Hunter” helicopter, but the electronics remained “disastrous” there.

“The pilot does not see anything, the pilot does not hear anything. These glasses, which are worn by pilots, are called "death to pilots". The sky is cloudless - everything is fine, and if there is a smoke, three days with red eyes go, ”Bondarev said. He spoke about this at a meeting on legislatively ensuring the work of the defense-industrial complex. According to the ex-commander-in-chief, the Ministry of Defense does not sufficiently finance design developments.

With the Mi-28, tragic incidents have already occurred. One of them was associated with flying at night in combat conditions. On the night of April 12, 2016 of the year in the Syrian province of Homs crashed Mi-28H, both pilots died. After an investigation, it turned out that the error of the crew piloting the car using helmet-mounted night-vision devices had led to the tragedy. Whether the error of the extremely experienced crew could be related to the features of night vision devices was not reported.

“We can say that I was at the origins of this problem when the predecessor of this machine, the Mi-24 helicopter, just appeared in Afghanistan. It was created as an air infantry fighting vehicle: it is armed and carries, ”Major General Alexander Tsalko, a veteran of the war in Afghanistan and former deputy commander of the Air Force of the Baltic Military District of the USSR for the army, explained to the newspaper VZGLYAD. aviation.

“In reality, however, it turned out not“ and - and ”, but“ either - or ”. With troops, but without weapons. Or with a weapon, but without landing. Due to the landing, the dimensions have been increased, and the dimensions are weight. As a result, in Afghanistan, closer to the middle of 80, we were asked to re-arrange the Mi-24, and also to remove the cargo compartment. So he would be somewhere a ton lighter, and it would already be a good fire support helicopter. That was how the Mi-80 helicopter appeared by the end of the 28, ”Tsalko explained.

“When the first pilots retrained for this helicopter, the impressions were very different,” added Tsalko. - There were flaws that always come first. In the process of mastering them cleaned. But at that time another car came out - Ka-50, it was significantly better than the Mi-28. Because Mi-28 is just Mi-24, re-arranged at the end of 1980's. ”
The press service of the concern KRET, which produces electronics, to which Bondarev complained, could not provide the VIEW newspaper with a prompt comment.

Test pilot, Hero of Russia Magomed Tolboev on air NSN blamed the contractors for the problems with the Night Hunter electronics. Problems, according to his version, could arise due to the fact that certain companies were able to lobby for their equipment, although it is far from ideal.

Another helicopter pilot, also a veteran of the war in Afghanistan, told the newspaper VIEW, on condition of anonymity, that the pilots' eyes do not get tired of “smoke”, but of outbreaks of breaks during night battles. And we are talking about the very glasses that the former commander-in-chief of the VKS mentioned.

“The main problem of these glasses is the lack of protection against bright flashes. You look at them like welding. Bondarev speaks about the difficulties in using glasses in adverse weather conditions, but this is not as critical as the use of glasses during a fight.

Powder gases from rockets, of course, glow. And here in the battle you shoot, they shoot their own, the enemy shoots, tracer fly and meter torches from machine guns - one continuous flash is around, and this makes your eyes very tired,

“Even in peacetime, if you look through these glasses at night on a settlement, everything has arrived. We need to think of something so that the sources of the flashes are extinguished, and the scattered night light, on the contrary, increases. The threshold of sensitivity below should be higher, and for the upper level - lower. But, unfortunately, industry does not always respond well to requests from pilots, ”the expert complained.

“In Afghanistan, we noticed that the spirits walk with beautiful night vision binoculars. We captured these binoculars as trophies and used them. I took a few pieces with me on the flight. And here in Torzhok, in a research aviation center, we made equipment weighing three kilograms for flying at night. Instead of machine guns on the nose of the helicopter they attached a bandura weighing more than a machine gun, and the screen was like an iPad. I flew once with this equipment - you can kill yourself! ”- said the source.

“But I showed them the captured binoculars, and I say: do the same. They did, even a little bit better. They did not even have to be held in their hands anymore - they picked up binoculars on a protective helmet: you take them from above, you lower them, and they are already in front of you, ”the source added.

“But in order to fly in these glasses, it is necessary to make a different cab, a night one. You need to see how the devices work. But with this equipment, however, it was possible to fly. As a result, the modernized binoculars were called glasses, but their eyes are still quickly tired, ”explained the expert.

In Syria, our pilots are also fighting in uncomfortable cabs

Colleagues Bondarev on military aviation wondered why he spoke about this issue in public only now, becoming a senator. After all, it can not be that he did not know about the same problem, working as commander in chief of the VKS. The problem with cockpit ergonomics and weapon control systems, according to pilots, is far from new.

“Everyone sees reports of regular combat use of Tu-22М3 aircraft in Syria,” another high-ranking source in the Russian Air Force reminded the newspaper VIEW.

“But no one, except specialists, knows in what difficult conditions pilots work in these Tu-22М3, how uncomfortable the chair is, how limited is the cabin, what awkward head restraints - and how this, respectively, interferes with the combat mission. It is not only about the working conditions of the crews in the cockpit, but also about errors and inconveniences in the weapon control systems. ”

According to him, the pilots spend several hours in these chairs and experience problems after returning even to just get out of the cockpit - back is so numb.

“The plane was built several decades ago; all this time, the industry simply ignored the complaints of the military about the extremely uncomfortable conditions of habitability and ergonomics. The aircraft has been repeatedly upgraded and improved, but anything has improved in it, but not only as regards the comfort of the pilot and the ease of operating the aircraft, ”said the source of the newspaper VIEW. He added that the problem is systemic in nature and is rooted both in the psychology of the military and in the absence of normal feedback from the military-industrial complex.

“First of all, many even high-ranking military are afraid to criticize both the authorities and the machines in which they have to work, according to the principle“ as if something did not work out, ”the source says. - Secondly - and this is perhaps the main thing - there is completely no platform where representatives of the army and industry could discuss the operation of equipment. There is neither a forum, nor special meetings, there is no system mechanism that allows the military to send their comments to the representatives of the manufacturing plant. ”

Ctrl Enter
Noticed oshЫbku Highlight text and press. Ctrl + Enter
We are
A great interview with Sergey Lavrov: about Ukraine, Obama and IranWhat you didn't want to know about England
94 comments
Information
Dear reader, to leave comments on the publication, you must to register.