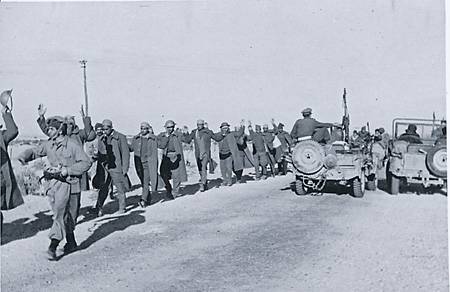 After the collapse of the Ottoman Empire in 1920, the UK received a mandate to rule Palestine, where the conflict between Arabs and Jews had already flared up. The Englishmen were hated by both of them. Because of this, the Arabs openly supported Hitler during World War II. The Jews, for obvious reasons, could not do this, but expected that they would immediately turn back after the end of the war. weapon against the British, having gathered before this combat experience in the ranks of the English army.


The collapse of the empire

After the victory over Hitler, the British Empire began to crumble immediately (to which the United States was very helpful). After that, responsibility for Palestine London shifted to the UN Special Committee, which recommended the creation of two states - Arab and Jewish, with the international status of Jerusalem. The UN General Assembly in November 1947 supported this option, which, as one would expect, didn’t like either the Jews or the Arabs. Both those and others began to quickly arm themselves, realizing the inevitability of war.

In December, the League of Arab States (LAS) consisting of Egypt, Syria, Jordan, Lebanon, Iraq, Saudi Arabia and Yemen decided to prevent the creation of a Jewish state by any means. The Jews were completely satisfied with this decision: their leader, Ben-Gurion, said that non-recognition by the Arabs of a Jewish state “would allow us to take such actions and achieve results that we would never have achieved in any other way. We will have the right to take everything that we can. ”

Right on New Year's Day, January 1, 1948, the Jewish militant groups Hagana, Irgun and Stern launched a terrorist war in Jerusalem with the goal of squeezing the Arabs out of the city. The Arab group "Jihad Warriors" immediately responded in the same way. In addition, the Arabs began blocking the road from Tel Aviv, which was used to supply Jerusalem. Jews had to organize convoys under the cover of improvised armored vehicles armed with machine guns. Until a certain point, it brought success, but on March 24, the Jihad Warriors completely defeated one of the convoys, preventing it from breaking through to Jerusalem. The Jews had to organize a large-scale operation to unlock the narrowest (literally and figuratively) places on the highway, the Bab el-Oued pass. This task was accomplished in three days. On April 6, another convoy was able to pass to Jerusalem.

To consolidate the success of the Jews began to clean up the Arab villages in the vicinity of the pass, expelling them from the population. On April 9, the village of Deir Yasin was completely slaughtered, killing all of its 254 residents. Four days later, Arab militants completely destroyed a Jewish medical convoy of 10 buses in Jerusalem, killing 75 people, almost exclusively medical staff. Thus, no states in Palestine have yet been created, but the parties have already committed a lot of grave crimes against each other, precluding the possibility of reconciliation.

Despite the problems surrounding Jerusalem, the Jews were able to take complete control of the north of their potential state (Tel Aviv and Haifa region) and its south (Negev desert). In turn, the next LAS conference decided to conduct a joint offensive by the armies of Iraq, Syria, Lebanon, Egypt, Jordan and the Palestinian groups with the aim of the complete capture of all the Jewish territories of Palestine. Since all these countries had regular armies with armored vehicles, artillery and aviationand the Jews had only groups of militants with makeshift armored cars, the Arabs had no doubt that two weeks after the start of the offensive they would hold a parade in Tel Aviv. Other scenarios were simply not considered.

14 May 1948, the British troops finally left Palestine, on the same day the state of Israel was proclaimed. The next day, the Arab armies launched an offensive with the aim of its complete destruction.

At the same time, there was equality in the personnel: both the Arabs and the Jews put up thousands of fighters on 20. However, as mentioned above, absolute superiority in technology was on the side of the Arabs. On the other hand, the level of combat training of the Arab armies was extremely low (some exception was the Jordanian 7-thousandth Arab Legion), joint planning of operations and rear support were practically absent. On the side of the Israelis was also the presence of internal communications, which allowed them to maneuver forces between different strategic directions.

In the north, Syrian and Lebanese troops, despite significant superiority in men and technology, almost did not succeed. With great difficulty, the Jews managed to contain the offensive of Iraqi troops in the center of the country in order to reach the Mediterranean and cut Israel in half. However, the command of both sides believed that the outcome of the war would be decided in the battle for Jerusalem. The basis of the Arab forces here was the 4 th mechanized regiment of the Arab Legion. His commander acted extremely competently, gradually squeezing the Jews from their positions. At the same time, the Arabs managed to seize the city of Latrun and thereby again block the Bab el-Oued pass, while the Egyptians, advancing from the south, were able to connect with the Jordanians. The attempt of the Jewish units to dislodge the Arabs from Latrun ended in disaster for them - they lost 220 people. On May 28, the Jews in the Old City of Jerusalem capitulated, and the Arabs freely released all civilians from there.

So, having failed to take Latrun, the Jews performed a labor feat, in three days they built a mountain road bypassing the pass. Because of this, 10 June to Jerusalem, part of which Jews still held, came the first convoy. At the same time, Israel began to request a truce mediated by the UN and secured it. The truce also began on June 10 for a period of one month. It largely saved the Jews from a general defeat.

Both sides were well aware that the ceasefire would not be extended, so they tried very hard to arm themselves. The Arabs, however, did not succeed, and all the above-described shortcomings in planning and logistics were not overcome. Jews were much more successful. They produced several thousand small arms, 30 fairly new at that time American tanks M4 "Sherman", more than 30 guns. I got Israel and military aviation, which was very powerful - 3 “flying fortresses” V-17, several English Spitfire fighters, 5 American P-51 Mustangs and, most importantly, 20 Messerschmitts Bf-109G. These aircraft were produced at that time in Czechoslovakia (the benefit of a license from defeated Germany was not required to buy), whose government, almost entirely made up of Jews, gladly sold the aircraft to compatriots. Many volunteers from the USA, Europe and the USSR came to Israel, almost all of them had excellent combat experience of World War II. It should be noted that at that moment the USSR clearly supported Israel, hoping to make it its stronghold in the Middle East, so the arrival of volunteers was not impeded.

June 29 was officially created by the Israel Defense Forces (IDF in Jewish abbreviation). On July 9, immediately after the end of the truce, the Jews launched a successful offensive, improving their position immediately in all directions. In particular, the pressure of the Arabs on Jerusalem was significantly reduced, although the Jews did not succeed in capturing Latrun and the Old City, the Arab Legion showed exceptional resilience. In the south, parts of the IDF unlocked the Negev, again breaking the link between the Egyptian and Jordanian troops. Now the truce was urgently requested by the Arabs and received it already on July 17. The UN mediator, Swedish Count Bernadot, proposed a territorial compromise, which involved the transfer of the Negev to the Arabs, for which the Jews killed him.

Like last time, the Jews successfully used the armistice for three months to buy weapons and finally turn the battle groups into a regular army. The Arabs did not do anything again; moreover, the kings of Egypt and Jordan proved to each other which of them is more important in the anti-Israeli coalition.

The fighting resumed on October 15. In the north, the IDF completely defeated the Lebanese army in two weeks, leaving the border with this country, and pushed the Syrian army to the foot of the Golan Heights. The fighting in the south were extremely fierce. Part of the Egyptian troops was pushed into the area now known as the Gaza Strip, while others fell into several "boilers", which, however, the Israelis were not able to eliminate. However, the attempt of the Egyptians to unblock the surrounded parts turned into a crushing defeat, as a result of which the Jews not only occupied the Negev, but also entered Sinai, that is, on the territory of Egypt. After that, the UK presented Israel with an ultimatum that if it did not withdraw its troops from Egypt, the British would come to the aid of Cairo. Moreover, it came to air battles, during which Israeli fighters shot down six British fighters. In early January, the fire in the area was stopped.

The war ended on March 10 1949, when the Jews took Eilat, thereby gaining access to the Red Sea. After that, they in turn signed a truce with all Arab countries. The Egyptian units surrounded in the Negev, under the armistice terms, went home with weapons and equipment.

In general, the Arabs suffered a heavy defeat in the war, which they themselves had unleashed and which, given the initial balance of power, had to win. Arab Palestine was never created, its territory was de facto divided by Israel, Egypt and Jordan. There were almost 800 thousands of Palestinian refugees, which the Arab governments have cynically used to this day for their own purposes.

On the other hand, Israel failed to establish full control over Jerusalem, which it considered to be its capital. Almost 6,5 thousand Jews died in the war, including more than 4 thousand IDF troops.

New wars were inevitable. The bloodshed that began 70 years ago has not yet been completed, and, objectively speaking, there is not the slightest prospect of its ending even in the immense future.