Decisive week of November: Moscow and Donbas are given only days for reflection. "Otvetka" United States for Abu Kemal 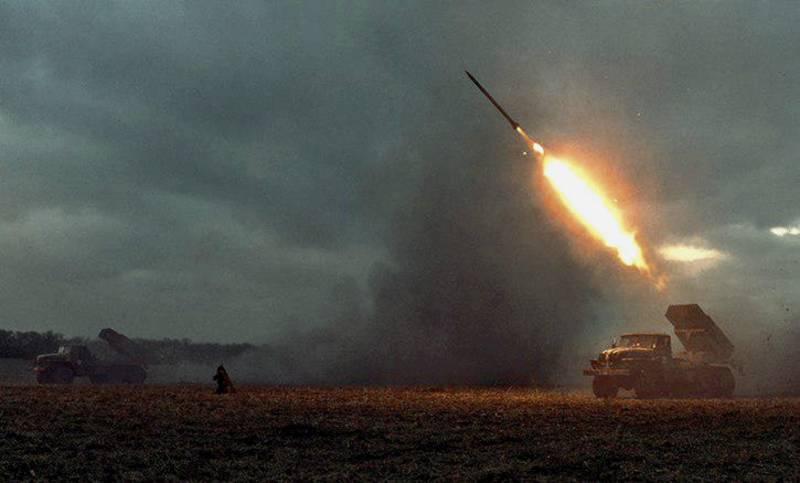 The battles in the vicinity of Abu Kemal also did not bring significant results to the Americans and coalitions. This city, being the last major fortified pseudo-caliphate in the southern part of Deir-ez-Zor province, was finally taken under control of the Syrian Arab Army, supported by thousands of Shiite militias of Iraq “Hasd al-Shaabi”, as well as by units, by the 20 of November. Hezbollah and the Guardians of the Islamic Revolution. Thanks to the full air support from the Tu-22М3 and Su-34 airborne systems of Russia, which inflicted on the militants a huge amount of massed point missile and bomb strikes, the American SSO and KMP, as well as the SDF formations supervised by them, did not help even the saturation of Abu-Kemal with Igilovsky reinforcement, thrown from the east coast of the Euphrates - the city was liberated. The only extensive fortified area, which is to be cleared by the Syrian army, extends today from the town of Wadi Bakii towards Salinyah (to the north), as well as from Salinyah towards Sushna. Despite the fact that this section has a length of about 220 km, after the “closure” of the Salinyah-Al-Qishmah corridor, the process of stripping the “boiler” of the IG at the intersection of the Deir ez-Zor and Homs governorates is in full swing and will be carried out at least , during the 1 month, and, at most, the 2-3 month. The only areas that Washington will manage to snatch are the south-eastern parts of the provinces of Al-Hasak and Deir ez-Zor, including the extensive Al-Omar oil field.

But do not think that Al-Omar is the ultimate dream for Americans and the "Syrian Democratic Forces." Their goal was to reach the Mediterranean coast in the northern part of Lattakia province to create a naval base, as well as facilities for loading oil tankers to the United States and Western Europe. But Ankara quickly stopped any possibility of creating such a “bench” for the United States and the Kurds, taking control of the formation of the YPG / YPJ in Aleppo province. Pro-American forces found themselves in the so-called "long-running semi-fleet" with the only possibility of exporting hydrocarbons from Syrian Kurdistan across the Syrian-Iraqi border, but these plans were not destined to come true. This was due to Washington’s aggressive and reckless rhetoric regarding the possibility of equating some units of the Iraqi police with terrorist groups.

The response from the liberators of Abu Kemal from Hashd al-Shaabi did not take long: the Shiite command of the militia of this unit stated that in the event of continued presence of US forces on Iraqi territory, a "hunt" for staff would begin. Naturally, this does not contribute in any way to the stable land traffic of "Kurdish oil" from Al Omar fields to ports in southern Iraq and Kuwait. In other words, the Syrian territory controlled by Kurds and Americans is practically “in a closed boiler” economically, not having the opportunity to fully cooperate with other states. The only loophole can only be bringing to mind the runways located in the territory controlled by the SDF, after which they will be able to take strategic military transport Aviation (from C-17 Globmaster-III to C-5B Galaxy). However, even such a measure is not able to significantly expand the interaction of Syrian Kurdistan with the outside world. There is a defeat of Washington in Syria at the same time "on all fronts" (from military to diplomatic).

Watching the above-described vague picture for the United States, the “hawks”, without hesitation, decided to expedite the implementation of the strategic plan for revenge. Without a doubt, we are convinced that this plan will extend to the Donbass theater of war covered by the “smoldering” conflict. This is evidenced by information from the American analytical group Hritage Foundation, which is the authority for the Trump administration at the time of reflection on the controversial weapons deals. Employees of the group said that next week the head of the White House will have to make a decision on the supply of "independent" lethal weapons, including the advanced anti-tank systems FGM-148 "Javelin". Recall that various lethal weapons, including the Javelins, can be delivered to the Armed Forces within the framework of a $ 47 million military assistance package, which was approved by the US State Department and sent to Congress and Donald Trump. Today, this “weapons package” has received additional support from the US National Security Council. It’s not yet clear from which fright the star-striped security agency has become responsible for allocating funds for military support of dysfunctional East European states, but the fact remains: the package may be approved as early as next week, following confirmation of the transfer of the Javelins Georgian army.

To maintain its rating at least within 20 - 25%, as well as to preserve the presidential chair (against the background of a complete defeat in the Syrian Arab Republic), Trump has nothing more to do but try to ensure the victory of the Kiev regime in the Donbass, as well as loosen the situation spring presidential company in Russia. It is for this reason that we should expect Trump's approval of this military assistance package. All this gives Moscow a certain, albeit not long, but still time to develop adequate countermeasures, among which may be to provide the armies of the republics of 152-mm corrected artillery shells 2K25 / M Krasnopol-М1 / 2, long-range complexes "Hermes" or TOC-1 "Buratino". The leadership of the Donetsk and Luhansk People's Republics should end up incessant confrontation for domination in power structures and other unhealthy “burdens”, gather their will into a fist and start forming full-fledged defensive orders on all fronts, because after Trump's approval of the above-mentioned military aid package, the recent capture by militants of The 54 of the OMBR of the Armed Forces of Ukraine and the “Aydar” battalion of the small village of Gladosovo (under Gorlovka) may seem like a childish prank.

It should be noted that the last days were marked for the republics by the most unique in the three-year stories bonus. Regardless of whether in the near future the DPR and LPR unite into a single powerful state of Donbass, the departure from political life of the Lugansk People's Republic of Igor Plotnitsky, as well as his puppet personalities Irina Teytsman (head of administration), Anastasia Shurkayeva (head of the LTR) and many others individuals will finally “reboot” the governing apparatus of the republic, having thrown out numerous “confidants” of strategically important information about the activities of power and socio-economic departments. Three years ago, the open massacre of Plotnitsky’s militarized guard over all representatives of the people's militia pointed out very “unclean” plans of this subject regarding the future of the LPR. Recall also the recent scandal and misunderstandings that erupted after completely delusional and almost criminal statements by the authorized representative of the LPR in the Minsk contact group, Vladislav Nikolaevich Daney, who, after everything that happened in Novorossia, became unexpectedly for everyone, like a looping, to say that “the only way LHR is in Ukraine ”, and that“ Lugansk agrees with the ORDLO status ”.

Certainly, against the background of recent events, the previous statements by the “plenipotentiary of all LC” Dane are not simple coincidences. Where is he today? That's right, at the moment it's a mystery. Everything that happens very clearly coincides with the opinion of Igor Kornet, the head of the Ministry of Internal Affairs of the Lugansk People's Republic, voiced at the November 23 office meeting. Cornet stressed that if it were not for the promptness and coherence of the actions of all the units of the Ministry of Internal Affairs, in the next day Lugansk could be under the control of the 3 regiment of the Special Forces GUR APU. It may, of course, be said too loudly, but a breakthrough in advance of weakened lines in the area of ​​Slavyanoserbsk or Happiness could still take place, because it was not by chance that the Carpenter-led entourage so closely “interacted” with the Ukrainian special services and the media. However, for the safety of the northern operational direction of the LC, as well as preventing a “revenge” on the guard of the Plotnitsky Corps of the People’s Militia of the DPR, it identified several motorized rifle and infantry units deployed within a few hours. However, the worst scenario was bypassed by the LC, but Plotnitsky’s every attempt to return to the post was doomed to failure, especially since he had already arrived on a SU-1157 flight to Moscow, and then took a taxi in the direction of Voronezh.

Such a denouement with the exposure of conspirators in the leadership structures of the LC, against the backdrop of the coming offensive of the Armed Forces of Ukraine, was most welcome, and would certainly allow the republic to enter a sustainable military-political and social course comparable to at least the DPR. We will wait for the next week, as well as the first half of December, when the issue of a lethal weapon will be finally resolved, and the junta will “destroy” the Utopian draft law “On the Reintegration of Donbass”; only after this will it be possible to predict anything.

Ctrl Enter
Noticed oshЫbku Highlight text and press. Ctrl + Enter
We are
Putin launched the "Turkish carousel". Recipe for communicating with "star-striped"New Iranian President Hassan Rouhani: A Beacon of Liberalism or the “Golden Mean”?
53 comments
Information
Dear reader, to leave comments on the publication, you must to register.