On the outskirts of the Arab showdown 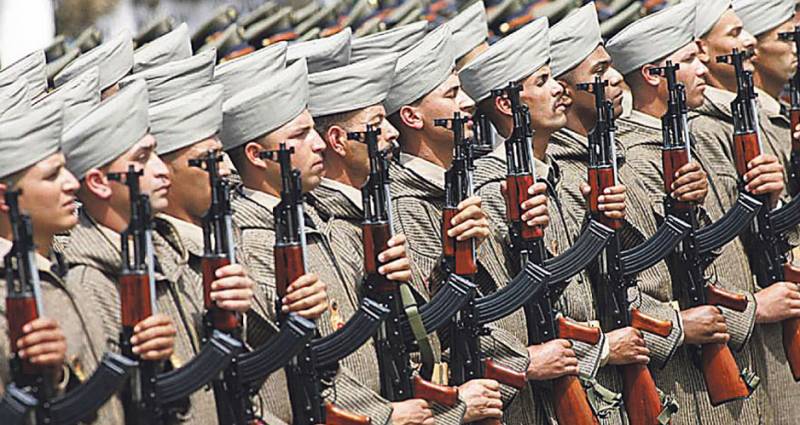 Tunisia and Morocco in the second half of the 50's almost simultaneously came out of colonial control. The first said goodbye to French rule in the course of the bloody events in and around Bizerte, the second is not without collisions, but agreed with Madrid and Paris. Currently, both North African states are pure regionals who do not claim to participate in the affairs of the Greater Middle East. Its problems to solve.

Before the collapse of the Gaddafi regime and the chaos of Libya, Tunisia was the most economically, politically and militarily vulnerable country in North Africa. Its armed forces are equipped with a meager amount of outdated technology mainly of American and French origin, as well as Italian, Brazilian and Chinese. Of the Arab armies, again, if Libya is not considered, only Lebanon is weaker than Tunisian (“Under the command of the Secretary General”).

The Navy is primarily 3 missile boats of the La Galette type (French Combat-3 type). Also in the composition of the Navy, there are guard ships and boats: Xizer Bizerta-type (French Р-3 without ASM), 48 Albatross (German torpedoes without TA), 6 Utika (Chinese Shanghai), 4 Spanish Barcelo ", 1" Condor "(former minesweepers of the Navy GDRs), 6" Bremse "(also from the Navy of the GDRs), 5" Gabes ", 4" Rodman ", 4" Sokomena ".

As is known, the “Arab Spring” began precisely with Tunisia, for him the consequences of this catastrophe turned out to be the easiest. Now he has returned to what he has left, a moderate dictatorship under the guise of a presidential republic. Because of the insignificance of the military and political potential of Tunisia, no one tried to drag him into a showdown in other Arab countries.

Morocco, the most western country in the Arab world, controls the Straits of Gibraltar of great strategic importance from the south. Rabat continues to occupy Western Sahara, although the independence of the latter has already been recognized by 48 countries (“The subsoil is more important than the referendum”), and also has a rather complicated relationship with Madrid due to territorial disputes over the Pereille island and the Spanish enclaves of Ceuta and Melilla (“Corrida of Terror” ). The main potential adversary of Morocco is Algeria, which in the last 10 years has significantly strengthened and updated its Armed Forces (“Immunity from the“ spring ”). This forces the kingdom to acquire a significant amount of military equipment. Main suppliers weapons in Morocco, the former metropolitan France, as well as the United States, which the country focused on after independence, traditionally perform (for some time American nuclear weapons were even deployed in the kingdom). At the same time, a significant range of weapons and military equipment was acquired in the USSR, then in Russia, as well as in South Africa. Recently, China has become the most important supplier of military equipment in Morocco, one of the 17 countries, which certainly recognize Western Sahara as part of Morocco.

The ground forces consist of the commands of the Northern (with headquarters in Rabat) and the Southern (Agadir) zones. The latter is also called Sahara, it includes the entire territory of Western Sahara. Of the six brigades of ground forces, only one (8-I infantry, Daura) belongs to the South zone. The rest - to the North: 7-I (Umud) and 10-I (El-Arak) infantry, 1-I (Rabat) and 2-I (Tan-Tan) paratroopers, 1-I light security team (Rabat) . The ground forces also have over 100 individual regiments and battalions for various purposes, the number and location of which is constantly changing.

The naval forces of Morocco have the newest frigate Mohammed VI (built according to the French-Italian project FREMM), the French 2 of the Mohammed V type (Floreal), the Dutch 3 Tariq ben Ziyad (the Sigma project), 1 Spanish Descubiert. Ships of the last two items are more often classified as corvettes.

On the whole, the country possesses powerful enough armed forces, however, in terms of combat potential, they are noticeably inferior to the Algerian ones. However, a war between these countries seems unlikely. Since Morocco is a monarchy, Riyadh actively draws Rabat into the GCC, although the Persian Gulf is very far away. The intervention in Yemen cost Morocco the loss of the F-16C fighter. In Syrian affairs Rabat chose not to climb.

Ctrl Enter
Noticed a mistake Highlight text and press. Ctrl + Enter
We are
Judgment in Tripoli. Saif al-Islam Gaddafi sentenced to deathRussian-Moroccan Relations: Past and Present
1 comment
Information
Dear reader, to leave comments on the publication, you must to register.