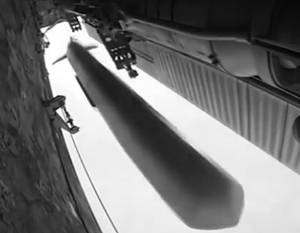 Used by Russia in Syria weapon honored with the kind words of the Supreme Commander. “Arms of such a level, of such a class should be in the center of our attention,” said Vladimir Putin, referring to the X-101 cruise missiles. What is this rocket and why did the president pay attention to its qualities?

On the eve of the Ministry of Defense published a video of X-101 missiles hit at the Islamic State * terrorists' facilities in Syria, on the border between Hama and Homs provinces. The blow, which destroyed three large arms depots and the command post of the militants, was caused by the missile-carrying Tu-95MS.

This is not the first time X-101 has been applied. In February of this year, the Tu-95 struck these cruise missiles at terrorist targets near the "capital of the IG *" Raqqa. For the first time, these rockets also publicly lit up when 2015 was hitting targets in Syria in November.

"This is really the most modern weapon, precision, high power, with a decent range" - 4,5 thousands of kilometers, said the Supreme Commander. Note for comparison that the range of ship-based cruise missiles "Caliber" - about 2 thousand. Km.

"Weapons of such a level, such a class should be in the center of our attention," Putin stressed, thanking "both the military and the designers and developers of one of our newest missile systems."
It should be understood that the objects of terrorists in Syria are far from the only possible target for such weapons, and it was certainly not being developed to combat ISIS *. Located deep in the enemy's rear airfields, bunkers, command centers, military bases, launchers, oil depots, infrastructure worth tens of millions and billions of dollars can be destroyed by a single missile worth several million rubles (or a volley of such missiles). And all this - in just a few hours, with a lightning strike, and even with the possibility of using a special BB (nuclear warhead).

It is not surprising that such a weapon is considered to be an instrument that gives the most serious military advantages. Its use in Syria can be viewed as a test in field conditions close to real combat conditions, and from a military engineering point of view these are extremely important tests. Fully fighting conditions in Syria for our pilots are not due to the complete absence of enemy air defense systems.

So what is X-101? In formal terms, this is a strategic air-to-ground cruise missile, created using technologies to reduce radar visibility (stealth). The rocket developed KB "Rainbow" them. A. Ya. Bereznyak, located in Dubna near Moscow.

The interlocutor pointed to the effectiveness of the terrain around the rocket system installed on the rocket. “After the launch vehicle drops the missiles, the system allows the missile, bypassing the air defense zones, with a high probability of destroying the intended target,” said Bizhev.

In addition, X-101 corrects the trajectory using satellite navigation GLONASS. Such a correction allows the rocket to build a more complex route, including when flying on an unoriented terrain, military expert Anton Lavrov noted in a conversation with the newspaper VIEW.

“The rocket in comparison with the previous samples is long-range, hardly noticeable; I can assume that it is more accurate and more protected from interference. The 4,5 range for thousands of kilometers is a serious indicator for an air-launched missile. Few people have such weapons, ”said Andrei Frolov, an expert at the Center for Analysis of Strategies and Technologies, in a comment from the VIEW of the newspaper.

In comparison with foreign counterparts

The American edition of National Interest earlier noted that the main strike power of Russian aviation is just the latest X-101 and X-102 missiles (nuclear version). They can carry strategic bombers Tu-95 and Tu-160.
“This is an analogue of modern American cruise missiles,” notes Aytech Bizhev. According to him, “in terms of flight range, accuracy of hit and guidance system, we win.”

“With the American systems, the rocket is comparable, and perhaps in some way surpasses them,” Frolov believes. In particular, he pointed out, there is an advantage over the Boeing AGM86 used on the B-52 missile bomber. The range of such missiles - to 2,5 thousand. Km. But, Frolov explained, “Americans have a slightly different logic - they, as a rule, use Tomahawks from ships.”

Military expert Anton Lavrov, in turn, explained: the Tomahawk cruise missiles "have a somewhat expanded set of flight plans, but speed, accuracy, and range are smaller." The range of the AGM-109H / K rocket (modifications of the Tomahawk as air-launched missiles) is up to 2,5 thousands of kilometers.

Lavrov also noted that "the Americans have a newer rocket with the stealth technology, but it is not strategic, its range is less than 1 thousand km."

“The X-101 / 102 rocket expands the possibilities for non-nuclear and nuclear strikes,” says Andrei Frolov, an expert at the Center for Analysis of Strategies and Technologies.