Russian fleet in the First World War and its combat effectiveness. Part of 4

February 23 2017
24
In 1916, the command of the Baltic fleet used 7 new Bars submarines, 5 English submarines and 4 old Crocodile submarines to fight on enemy communications. 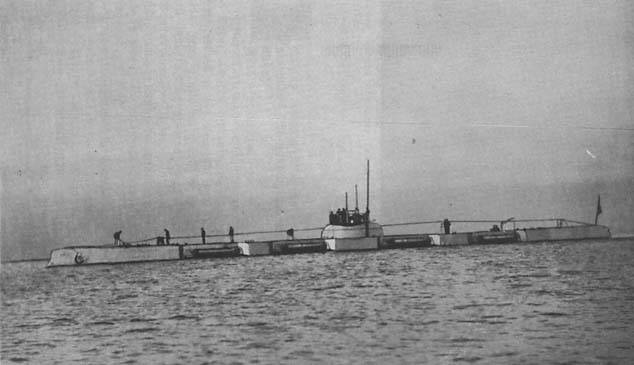 So, in the first half of May, 1916 was carried out reconnaissance of the routes of movement of German transports and 3 of large vehicles were sunk by the total displacement of 8600 tons. The result of the second campaign (the second half of May) was the damage to the German destroyer. One boat did not return from the hike.

From the end of June to November, Russian submarines sank 2 vehicles and another 1 captured. The English boats were not successful during this period.

The record for trophies among Russian submarines in the Baltic was the "Wolf". May 4 "Wolf" in the Landsort area off the coast of Sweden detained, and then torpedoed the German transports "Hera" (4300 t), "Koljga" (2500 t) and "Bianka" (1800 t), and two months later drowned in the Gulf of Bothnia German transport "Derita" (6000 t) with a cargo of Swedish iron ore on board. Moreover, all actions of submariners were carried out in strict accordance with the law of the sea. 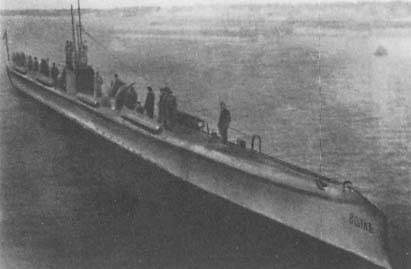 Surface raids are organized, timed to coincide with the exit of large enemy convoys from Swedish ports, about which fleet headquarters received information from their intelligence agents. Ship units of 2 - 3 cruisers and 7 - 10 destroyers were to go on the routes of the convoys and strike at them. To cover surface ships and their reinforcement, submarines also entered the corresponding area.

It is worth noting the 18 battle of May 1916 in Norrköping Bay (the destroyers Novik, Thunder and Winner discovered a convoy at night, consisting of 14 German transports under cover of the auxiliary cruiser German and two convoy ships of the enemy escort ships were sunk, but the transports, taking advantage of the darkness and the fact that the convoy ships were tied up by the Russian destroyers, disappeared) and 30 in May 1916 (the destroyers Vushitelnyi and Vigilant made a raid on the Swedish coast in the Gulf of Bothnia, captured by German transports ORMs »(10000 t) and" Lisbon »(5000 t) with iron ore on board).

Mine was traditionally used to fight communications. weapon. In August, a minefield containing 821 mine was installed in the Olandsgaf Strait (a route of German transports carrying iron ore from Swedish ports in the Gulf of Bothnia). In October, two more mine setups were made in the North Quark strait (120 mines) and in Steinort (200 mines).

The Germans in the 1916 on Russian active and defensive minefields lost 15 ships, including 9 destroyers and destroyers, 2 minesweeper, 1 submarine.

From the side of the enemy it should be noted: 1) implementation of measures within the mine war and 2) attempt to break into the Gulf of Finland by destroyers in the autumn of 1916.

Thus, the Germans laid mines near the islands of Dago and Ezel, as well as in the Irbensky Strait, at Moonzund, at the fairways of the Abo-Aland skerries. German submarine minelayers, breaking into the Gulf of Finland, put up a few mine cans near the islands of Gotland, Nerva, B. Tyuters and Seskar. On the German mines in 1916, the minesweeper Shield, the destroyer Volunteer, military vehicles, three auxiliary ships and a merchant ship were killed; damaged armored cruiser "Rurik" (near the island of Gotland), three destroyers, minesweeper and several small vessels.

In the course of an operation to break into the Gulf of Finland, the 10 th mine fleet of Germans (11 of the newest destroyers) carried out a raid into the western part of the gulf in order to destroy the Russian sentinel ships located there and bombard the Baltic port. The operation began on October 29: when passing the minefield of the Advance position, the 2 of the ship sank and sank, the rest, forcing the Front position, conducted an unsuccessful search for the Russian guards and fired at the Baltic port (released on the port and city of the 162 projectile, which damaged several buildings and killed and wounded 18 man, including children). On the way back at the minefields of the Frontline, 5 destroyers were killed. The operation ended in a catastrophe that cost the German fleet of the seven newest destroyers (S-57, S-58, S-59, G-90, V-72, V-75, V-76) - the 10-I fleet was defeated. 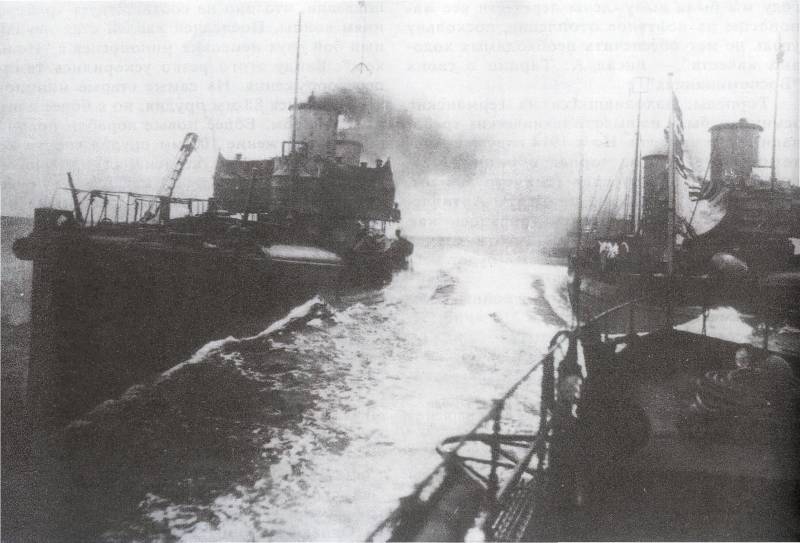 3. German destroyers in the campaign.

It should be noted that hostilities in the Baltic in 1916 were limited. Both sides did not carry out large-scale offensive operations. The main forces of the Russian fleet, in fact, were inactive during the entire campaign. Passivity adversely affected including the morale and morale of sailors.

The actions of the German fleet did not differ in activity either. The undoubted result of the actions of the Baltic Fleet in this campaign was a significant impact on the intensity and volume of enemy sea transport (by about a third) [Kozlov D. Yu. Strategic calm. Some details of the 1916 campaign in the Baltic Sea // Militaryhistorical magazine. 2009. No. 3. P. 7], and the introduction by the Germans of a system of convoys led to tension in their Navy and distracted the ships from solving other problems. At the same time, the enemy began to increase the volume of supplies of iron ore, strategically important for him.

The 1916 campaign in the Baltic is referred to as naval historians as a period of “strategic calm”. The Baltic Fleet, with small interruptions, retained and in 1916 strengthened the operational regime that was favorable to itself in the Gulf of Riga, the Gulf of Bothnia, seriously leveling the efforts of the German forces operating against the coastal flank of the Northern Front.

For the 1916 campaign on the Black Sea, the following circumstances were decisive: 1) active actions of the Russian fleet on a tactical and strategic scale; 2) increased submarine danger from the German submarines.

The main task of the quantitatively and qualitatively Black Sea Fleet is to assist the troops of the Caucasian Front in its large-scale offensive operations.

Assistance to the Entente's ally, Romania, manifested itself in the fleet's activities in the second half of the year. Assistance was provided to the Romanian-Russian troops, interaction with them and supply (above all - the transport of troops along the Danube, the defense of the Danube and the Romanian Black Sea coast). In addition to the Expedition of Special Purpose, which was located on the theater of warfare from the 1914, a group of gunboats and a mine-artillery detachment (up to 1250 specialists - artillery, miners and sappers; 8 228-mm, 8 152-mm, 4 120-mm guns, and sapper; machine guns, 4 coastal torpedo tubes, river mines). These forces, in cooperation with the Romanian river flotilla, provided fire support to the Romanian troops, transported troops along the Danube, and set up minefields. For the defense of the Black Sea coast of Romania, a special detachment of special purpose of non-permanent composition was formed: in October, for example, it included the battleship Rostislav, 25 destroyers, 10 submarines, 2 minesweepers, 8 transport and an air squadron. The ships of the detachment were based on Constanza, and the aircraft on Lake Singol (near Constanta). Constanta was also used as an intermediate base for destroyers operating at Varna and the Bosporus. 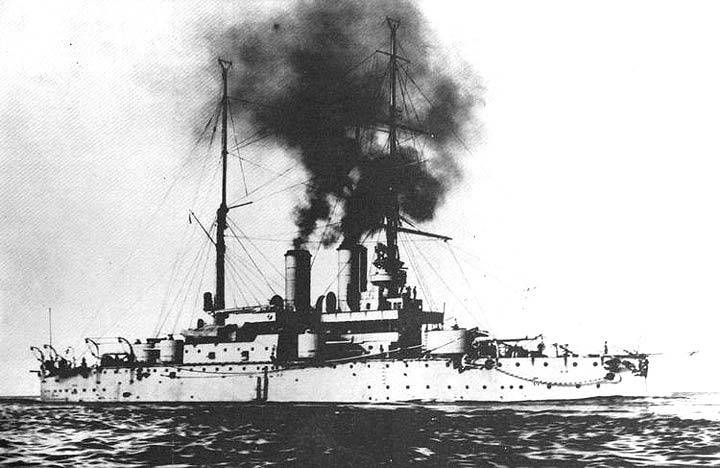 The most important task of the fleet was to strengthen the blockade of the Bosphorus, the coal and oil areas of the enemy, the struggle on the communications of the enemy. The main means of blockade were minefields. During the campaign, 14 barriers (2187 mines) were exposed - the Bosphorus was in fact clogged. Barrier operations were carried out by large fleet forces with the participation of the newest battleships, mines were laid by destroyers and the submarine “Crab”. After the end of the productions, a blockade patrol was established, which was provided by the actions of destroyers and submarines - in the second half of the year only submarines carried out 33 combat campaigns. The most productive were the trips of the submarine Seal, 4 times going out to the Bosphorus and sank the ship and three sailboats, seized a large ship and sailboat. From mid-December 1916, until the end of August, 1917 submarine sank and captured 8 ships for 25, and Narwhal submarine for the first half of 1917 sank and seized 23 sailing vessels. The list can be continued. 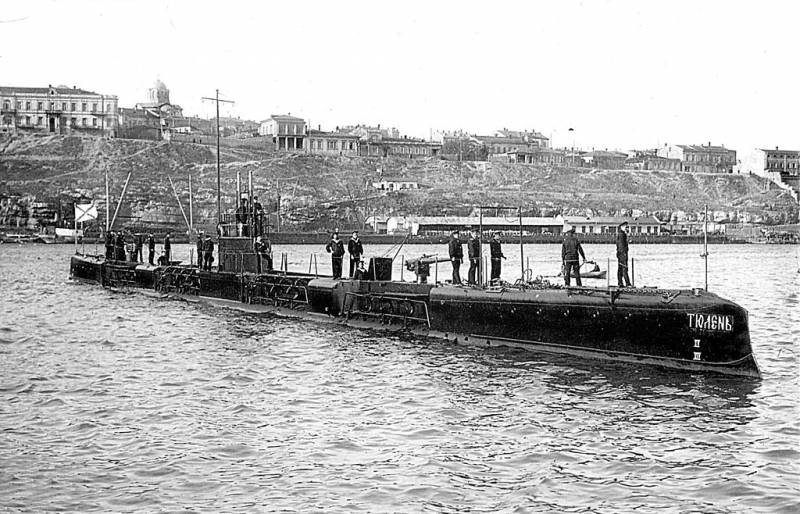 On the obstacles and as a result of the blockade forces, the enemy at the Bosphorus lost: a gunboat, a submarine, a destroyer, several minesweepers; four transport, six ships, several dozen small ships. The blockade of the Bosphorus has led to serious difficulties in supplying the capital of Turkey and the fleet with fuel, food and raw materials. The scale of operations of the cruising forces and enemy submarines has decreased. Despite the energetic actions of the Black Sea Fleet, he still failed to achieve a complete blockade of the Bosporus.

Throughout the campaign, the Black Sea Fleet also blocked the coal region of Turkey. Inspection and shelling of the ports of the region (Zonguldak, Eregli, Kozlu) and search actions carried out ships of maneuverable groups. These actions played a big role in disrupting the enemy’s freight traffic.

The fight on the enemy’s sea lanes, primarily by destroyers, was quite successful. So, only in the first half of January 164 of the sailboat, 2 of the motorized vessels were sunk, shipyards in Samsun, Unie and Faz were shelled. During the Trebizond operation, up to 300 various ships were destroyed.

The actions of the Russian fleet on enemy communications in 1916 led to the disruption of its operational plans, and caused serious damage to the Turkish economy. According to far from complete data, only in the southwestern part of the sea did the Turks in 1916 lose six coal transports, sixteen steamers, and several hundred sailboats. By the end of the year, only two coal vehicles remained in service.

Compared to the Baltic aviation the fleet was used relatively poorly, although the Zunguldak aerial bombardment was quite successful, and seaplane attacks on enemy warships were practiced. Aviation assisted the ground forces, delivered strikes at bases and ports, conducted reconnaissance for the purpose of anti-submarine defense, and fought with enemy aircraft. And although the Black Sea Fleet aviation was used on a larger scale and more skillfully than before in this campaign, but because of the small number of aircraft that the fleet had, the actions of naval aviation did not acquire the necessary scope.

Active minefields and operations of Russian ships on sea lanes forced the German-Turkish fleet to significantly limit their combat activities.

The enemy could oppose to the actions of the Black Sea Fleet the tactics of disrupting Russian sea communications, measures to protect their communications, occasional exits of “Geben” and “Breslau” for shelling ports on the Caucasian coast and the positions of Russian troops and submarines. The actions of the cruisers were more psychological in nature and continued until August (before the installation of the main minefields at the Bosporus).

The submarines operated until November and were a major threat - during the campaign they carried out 42 combat campaigns. The losses of the Russian fleet from the actions of the German submarines in the 1916 campaign amounted to: 6 transports, 2 hospital ships, steamer and 13 sailing and motor-sailing ships sunk, 4 transport and 2 steamer damaged.

Underwater minelayer UC 15 and the Breslau cruiser 7 mine setups were carried out (a total of 177 mines were delivered). The Black Sea Fleet has lost the destroyer 2, transport, passenger steamer and several small vessels.

In the 1916 campaign, the enemy lost on the Black Sea: the 2 destroyer, the 4 submarine (in October UB 7 at the Chersonese lighthouse sank the Russian seaplane, on October 10, the UN 24 disappeared from the Russian minefield at UB 45, allegedly 1 disappeared from UC XNUM in November on the Russian minefield. at the Bosphorus on a mine UB 15), a gunboat, 46 transports, 6 tugs and steamers, 16 motor and 4 sailing ships. A. Gayer, a researcher of submarine actions, stated: “So, the Black Sea absorbed the victims without achieving any significant success” [Gayer A. German submarines during the 865-1914 war. L., 1918. C. 1933].