January 21 2017
10
Jordan, in contrast to the monarchies of the Persian Gulf, does not have significant oil reserves, therefore it is limited in financial possibilities. Nevertheless, the Amman armed forces are among the three most combat-ready in the Arab world, primarily in terms of personnel training.
This partly contributed to the participation in three wars against Israel, in which the Jordanian army, despite the defeat, gained considerable combat experience. In addition, the army consists mainly of hereditary Bedouin warriors, as well as Circassians and Chechens, a significant number of whom migrated to Jordan in the 19th century after the Caucasian War. The term "professional army" suits them much more than mercenaries of oil monarchies.


And the technical equipment of the Armed Forces of Jordan is much better than most countries in the region. The main exporters of military equipment to Jordan are the United States and the United Kingdom. Among the suppliers are also France, China, Turkey, South Africa. Most of the ground defense equipment of Soviet and Russian production. Together with our country in Jordan produced the latest RPG. There are no other military enterprises in the country.

Tank The park has 392 modern British Al-Hussein (Challenger-1) and 364 older Khalid (Chieftain), 122 American M60, modernized in Jordan under the Phoenix program. It is planned to purchase T-72 tanks in Poland.

Navy Jordan are purely symbolic. The coastline of the country is very short, consists actually of one port of Aqaba. As part of the Navy 3 patrol boats of the English built "Al Hussein", 24 small patrol boats, 18 boats MTR.

Jordanian military intelligence is considered the strongest in the Arab world. It effectively fights against Islamic radicals. Amman warned Americans about the September 11 2001 attack, but for some reason Washington did not take advantage of this warning. Jordanian intelligence actively interacts with the Israeli Mossad. 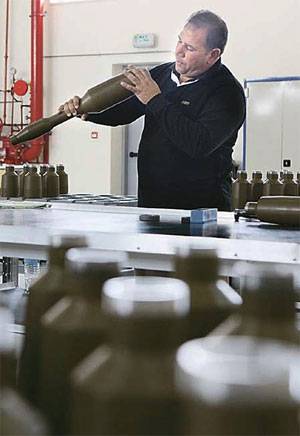 In general, the cooperation between these neighboring countries is quite old, although they fought three times among themselves. Back in 1971, during Black September, Tel Aviv helped Amman prevent the Syrian forces from invading to support the Palestinians. And the year before last, Israel handed over to Jordan several AN-1 “Cobra” helicopters, which has no precedent: never before has the Jewish state provided weapon Arabic. Moreover, it is likely that in the near future at least some of the X-NUMX F-98A / B fighters, which have just been withdrawn from the Israeli Air Force, will follow the same route.

Jordan has a long border with Syria, and passing close enough to Damascus. The kingdom tried in every way to avoid being involved in a civil war in this country, but the pressure from Washington and Riyadh was too strong. Therefore, Amman, though without much enthusiasm, is supporting the Syrian opposition. The Jordanian air force is participating both in a farce called “Unshakable determination” (collective IS bombings) and in attacks on Yemeni Housits. However, just for Jordan, the farce turned into a tragedy - in December, the X-NUMX of its F-2014 was shot down by terrorists (apparently, with the captured SAM “Osa”), the pilot was captured and burned alive.

At the same time, it is likely that war will have to be fought with the “Caliphate” of Jordan on its territory. The first precedents of fighting with terrorists of a banned grouping in Russia took place in December 2016. And it is quite natural. Any playing-up of the anti-Assad opposition means, in essence, the support of the IG, which as a “gratitude” comes from the war to those who helped it. In this regard, you can only once again rejoice at the adequacy of Russian politics. It is very important not to make any compromises, not to reduce pressure, not to engage in an absurd search for a nonexistent "good opposition" against the background of "bad terrorists."