October 4 2016
33
October 4 in our country celebrates the Day of Civil Defense Emergencies Ministry. Why October 4? The fact is that on this day in the 1932, in the USSR, a centralized system of local anti-aircraft defense (local air defense) was created. At the same time, the position was approved. The provision on the Ministry of Defense and Military Defense assumed the construction of shelters, the formation of rescue brigades, and the conduct of work on training the population in action during an air attack.


The structure of the MPVO was deployed in the system of the People's Commissariat of Internal Affairs. Local air defense from the day of its creation began to cover large industrial centers, cities, and important infrastructure facilities. In fact, the creation of a centralized air defense system was the beginning of the full development of civil defense in the country, which played an important role during the Great Patriotic War. Preparing the population for possible evacuation measures in case aviation The bombing helped save hundreds of thousands of lives from Minsk and Kiev to Leningrad, Tula and Moscow.

For your information:
civil defense - a system of measures to prepare for the protection and protection of the population, material and cultural values ​​in the country from the dangers arising from the conduct of hostilities or as a result of these actions, as well as in emergency situations of natural and man-made nature.

Attention was paid not only to protection against aerial bombardments, but also to protection against other variants of potential aggression from unfriendly states. Special attention was paid to the preparation of the Soviet population for a nuclear strike by American, as it were now expressed, “partners”. The actions of local authorities in warning the population with the “Air-raid”, “Radiation hazard”, “Chemical alarm” signals were practiced. Much attention was paid to the fact that a citizen should take with him to the shelter in case of receipt of one of these signals or several at once.

One of the posters on the subject “Civil Defense of the USSR”, connected with the protection of children from weapons mass destruction: 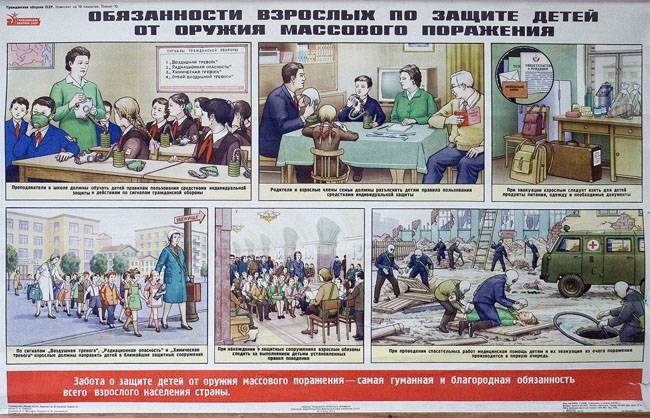 Poster "Civil Defense of the USSR", telling about the rules of evacuation of the population to the asylum: 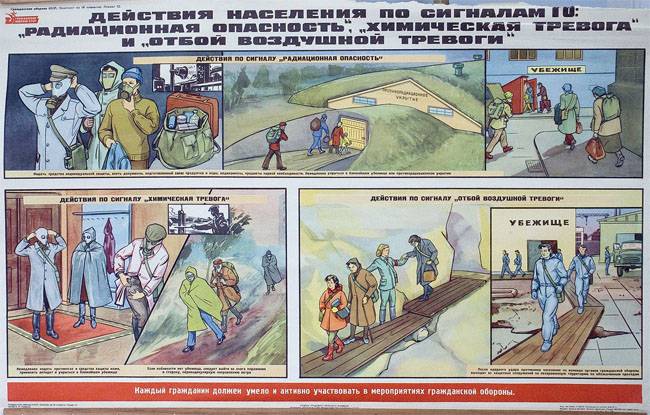 These posters lucidly explained to the population the set of actions that must be taken to preserve their lives, health, and also to preserve the health and lives of other people. And these simple illustrations and tips, so it goes, do not lose their relevance to this day. If the Soviet authorities in April 1986 didn’t pull in with the recognition of the monstrous disaster at the Chernobyl nuclear power plant, they would promptly inform the public about the danger, taking care of the evacuation not several days after the explosion and fire, but on the same day, then perhaps many lives would be saved. But историяAs you know, it does not tolerate the subjunctive mood, and today no one, even one of the major specialists, can reliably say how many people were negatively affected by such a factor as radiation contamination of an area. Until now, the echo of the disaster that occurred 30 years ago, demonstrates its echoes in Belarus, Ukraine and Russia.

Speaking of the Chernobyl accident, one cannot but mention the feat that the USSR emergency services officers, soldiers, doctors, miners, firefighters, builders, drivers associated with the elimination of the consequences of what happened at night 26 on April 1986, committed then.

Civil defense activities are actively carried out in our country today. Civil defense events are held under the auspices of the Russian Emergencies Ministry.

So, on the day of Civil Defense, a large-scale training begins in all regions of the Russian Federation without exception. The press service of the Ministry of Emergency Situations reports that the training will involve both local governments and executive authorities of regions, territories, republics, as well as federal executive authorities.

The name of the GO training: "Organization of the implementation of civil defense measures in the face of large-scale natural and man-made emergencies in the Russian Federation."

The training will take place over the course of 4 days and consist of 3 different stages.
The 1 stage consists in working out the issues of warning and gathering representatives of various authorities.
2 stage: planning and organizing civil defense events, deploying force groupings to eliminate emergency situations.
3 stage: the organization of interaction between the authorities of the forces of civil defense. 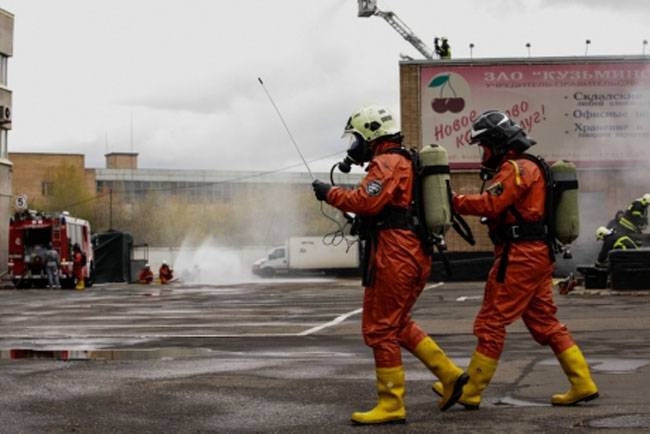 From the press service of the department:
In the course of the training, it is planned to work out practical measures for the radiation, chemical and biological protection of workers and the public in the event of an emergency at critical and potentially dangerous facilities. It is also planned to conduct preventive measures on fire safety, civil defense, protection of the population and territories from natural and man-made emergencies at socially significant facilities, as well as at facilities with a massive presence of people.

The training will involve about 40 millions of people, more than 200 thousand specialists of rescue teams and more than 50 thousand units of various equipment.

One of the important areas of work of specialized services in the field of civil defense is preventive work with the public. After all, it is often the person who becomes the cause of an emergency. Burning a campfire in the forest can turn ashes of pine forest into ashes in a matter of hours. The exit of the fishermen to the open ice in the pre-flooding season may lead to the fact that hundreds of people will be held hostage to the elements. It is clear that there is a special category of people for whom warnings and prohibitions are some kind of book terms, but for most citizens preventive work on the part of specialists plays an important role.

The scheme of civil defense management in our days: 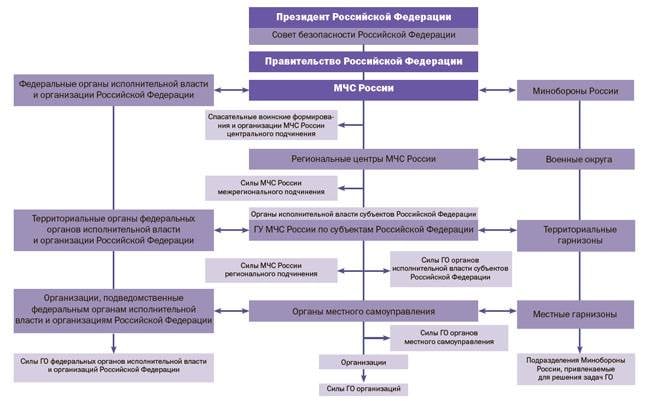 Activities in the field of civil defense allows you to maintain the livelihood of the population of the country in emergency situations of both man-made and natural nature.