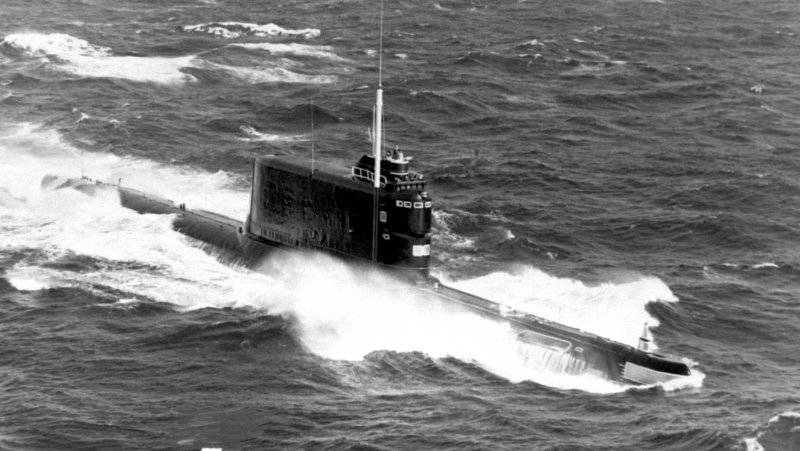 ... Under the cover of darkness in the early morning of February 24, the 1968 diesel-electric submarine K-129, on-board number “574”, left Krasheninnikov Bay and headed for the Pacific Ocean to the Hawaiian Islands.

March 8, at the turning point of the route, the submarine did not signal the passage of the control line. The faint hope that the boat was drifting in the water position, devoid of travel and radio communications, dried up after two weeks. A truly major search operation has begun. For 70 days, three dozen Pacific ships fleet examined the entire route "K-129" from Kamchatka to Hawaii. All the way, water samples were taken for radioactivity (on board the submarine was nuclear weapon). Alas, the boat has sunk into the unknown. 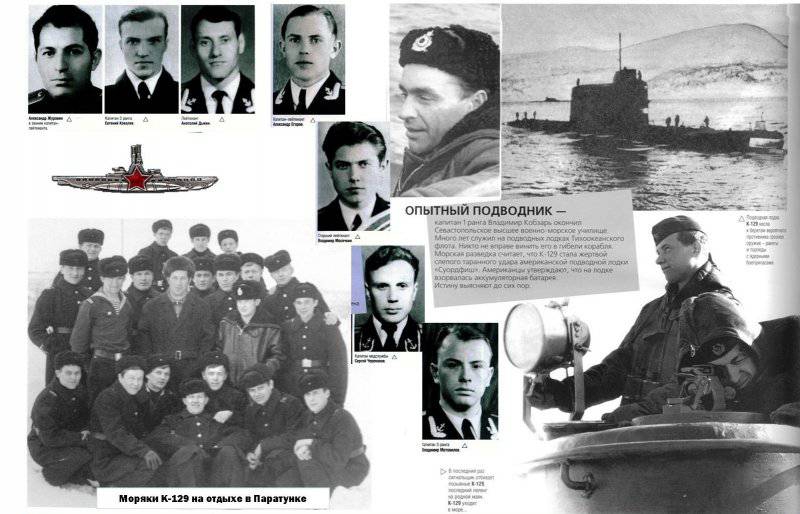 Crew of the dead boat

In the autumn of 1968, sorrowful notices were sent to the relatives of the missing sailors from the K-129 crew in the cities of the Soviet Union, where in the column “cause of death” it was stated: “recognize the dead”. The fact that the submarine disappeared was hidden by the military-political leadership of the USSR from the whole world, quietly excluding K-129 from the Navy.
The only one who remembered the lost boat was the US Central Intelligence Agency.

The nuclear submarine "Barb" (SSN-596) was on duty in the Sea of ​​Japan when something unexpected happened. A large detachment of Soviet ships and submarines went out to sea. The surprise was that the sonars of the ships of the USSR Navy, including submarines, constantly “worked” in the active mode. It soon became clear that the Russians were not looking for an American boat at all. Their ships quickly shifted to the east, filling the airwaves with numerous messages. The commander of the USS "Barb" reported to the command about what had happened and suggested that, judging by the nature of the "event", the Russians are looking for their sunken boat. 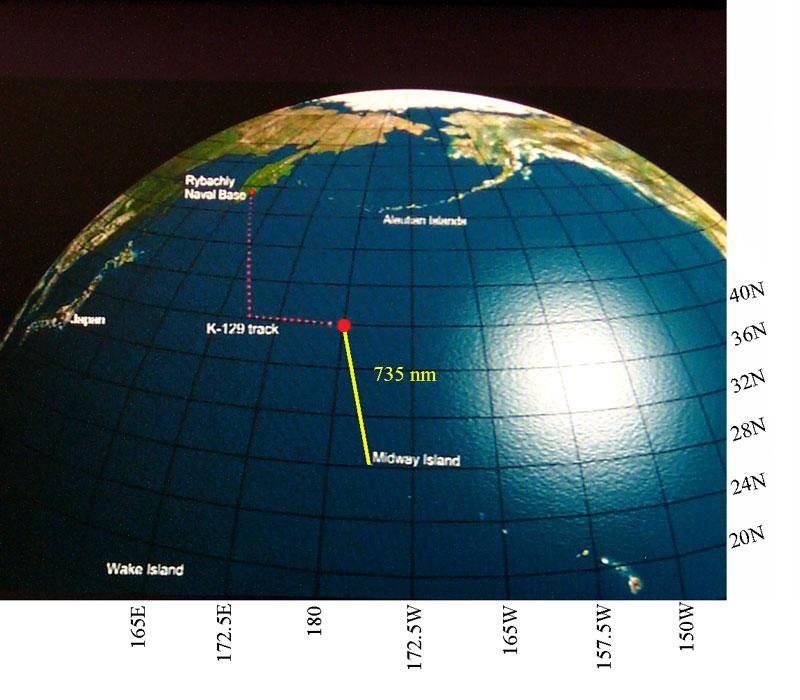 Specialists of the US Navy began to listen to kilometers of tape recordings received from the bottom acoustic stations of the SOSUS system. In the cacophony of the sounds of the ocean, they managed to find a fragment where the “clap” was recorded. The signal came from a ground station installed on an elevation of the Imperial Mountains (part of the ocean floor) at a distance more than 300 miles from the intended crash site. Given the accuracy of the SOSUS direction finding in 5-10 °, the position of the "K-129" was defined as a "spot" the size of 30 miles. A Soviet submarine sank 600 miles northwest of Fr. Midway (Hawaiian archipelago), in the middle of the ocean depression at a depth of 5000 meters.

The official refusal of the government of the USSR from the sunken "K-129" led to the fact that it became "ownerless property", thus, any country that discovered the missing submarine would be considered its owner. Therefore, at the beginning of 1969, the CIA began discussions about the possibility of raising valuable equipment from a Soviet submarine from the bottom of the Pacific Ocean. Americans were literally interested in everything: the design of the submarine, mechanisms and tools, sonar, documents. A particular temptation caused the idea to penetrate the radio communications of the USSR Navy, to “split” the radio ciphers. If it is possible to extract radio communication equipment, it is possible with the aid of a computer to reveal information coding algorithms, to understand the key laws of the development of USSR ciphers, i.e. reveal the entire system of deployment and management of the Navy of the Soviet Union. Nuclear weapons aboard the boat were no less interesting: the design features of the P-21 ICBMs and torpedoes' combat units.
By July, 1969 was ready a clear plan for the next few years and the work was boiling. Given the tremendous depth at which K-129 sank, the success of the operation was rated at 10%.

To begin with, it was necessary to establish the exact location of K-129 and assess its condition. This took the atomic submarine for special operations USS "Halibut" (halibut). The former missile carrier was thoroughly modernized and saturated "to the eyeball" with oceanological equipment: side thrusters, anchor device with bow and stern mushroom anchor, diving camera, far and near side sonars, as well as a deep-sea towed Fish module equipped with a photo and video -Equipment and powerful spotlights.

When Halibat was at a design point, days of hard work were stretching. Every six days they lifted the deep-sea apparatus to recharge the film in the cameras. Then the photo lab was working at a frantic pace (the camera was making 24 frames per second). And once on the table lay a picture with a clearly delineated feather rudder submarine. "K-129" lay on the ocean floor according to unofficial information at point 38 ° 5 'N and 178 ° 57 'c. D. (according to other data - 40 ° 6 'N and 179 ° 57' E) at a depth of 16 500 feet. The exact location of the "K-129" is still the US state secret. After the discovery of the K-129, the Halibat also took 22 thousands of shots of the Soviet submarine. 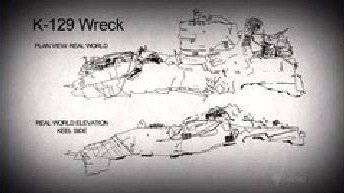 It was originally planned to open the K-129 hull using remote-controlled underwater vehicles and extract the materials needed by the American special services from the submarine without lifting the boat itself. But during the “Khalibat” mission it was found that the K-129 hull was broken into several large fragments, which made it possible to lift the compartments of five-kilometer depth that were entirely interesting for the intelligence officers. Of particular value was the bow of the “K-129” with a length of 138 feet (42 meter). The CIA and Navy appealed for financial support to Congress, Congress to President Nixon, and the AZORIAN project became a reality.

A fantastic project required special technical solutions. In April, 1971 at the Shipbuilding Dry Dock Co. (Pennsylvania, East Coast USA) was laid the ship MV Hughes Glomar Explorer. The giant, with a total displacement of 50.000 tons, was a single-deck vessel with a "central slot" above which was located a giant A-shaped tower, aft of the engine room, a bow two-tier and aft four-tier superstructures. 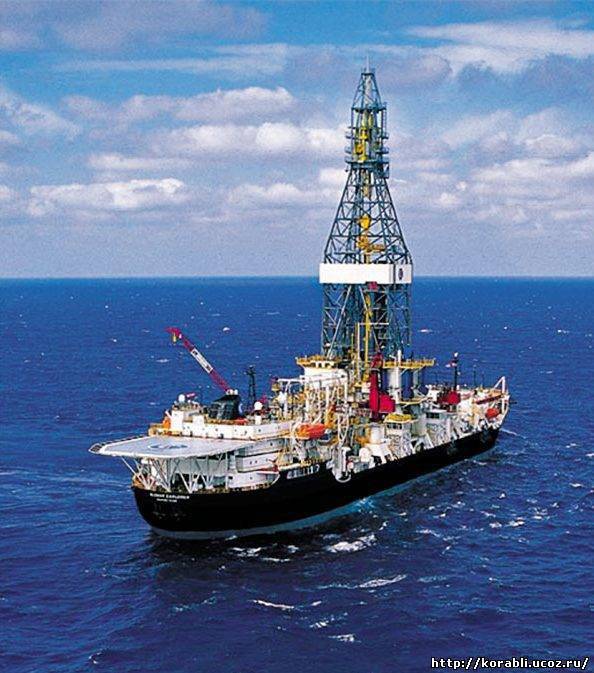 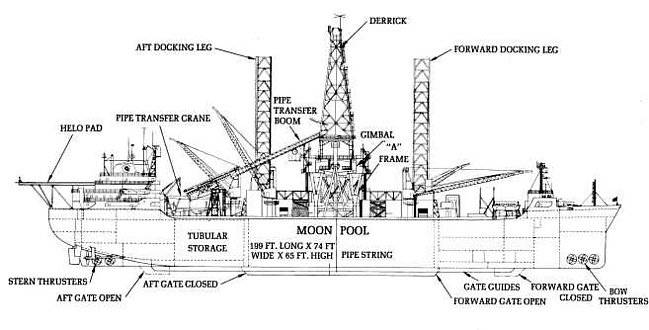 Almost a third of the ship occupied the “Moon Pool” with the dimensions 60, 65 x 22, 5 x 19, 8 m, which served as a dock to accommodate a deep-water capture, and then parts of a raised submarine. Filled with water, it looked like a giant swimming pool, with the exception of taps at every corner. From the bottom, the pool was closed with flaps with rubber seals.

One of the myths about the project “Azorian” - “K-129” broke up during the ascent and most of it fell to the bottom - refuted by the mismatch of the dimensions of the “Lunar pool” (length 60 meters) and the length of the body “K-129” (length by KVL - 99 meters). It was originally planned that only part of the submarine would be raised.

Along the diametral plane, in the bow and in the stern from the central slot, movable columns were installed, designed to receive a gripping device from a submerged barge. In appearance, they resembled retractable supports on offshore drilling rigs and, according to the authors, were to mislead the observers of this strange vessel, which they succeeded in the beginning. So, on May 11, 1975, in the magazine Parade, was placed a photograph of the vessel "MV Hughes Glomar Explorer" with the statement that these columns rest on the bottom. Later analysis of foreign publications allowed Soviet specialists to determine their true purpose.

The contract for the design of the ship the CIA concluded with the company Hughes Tool Co. The choice of this company was not accidental. It was her head, Howard Hughes, the billionaire and adventurer, who was best suited for the role of the main organizer and creator of this ambitious venture. It was Hughes who created the first lasers, and then the first American satellites. Missile guidance systems, three-dimensional radar - all these were produced by Hughes companies. In 1965-1975 contracts with the US DOD only Hughes Aircraft companies amounted to 6 billion.

At the same time, at the shipyards of the National Steel Shipbuilding Corp. in San Diego (California, West Coast, USA), the barge HBB-1 (Hughes Marine Barge) and the Clementine deep-sea capture were built. Such a distribution of production ensured the complete secrecy of the operation. Even the engineers directly involved in the project, separately, could not understand the purpose of these devices (ship, capture and barge).

After a series of tests on the East Coast, 13 August 1973. “Glomar Explorer” went to 12 000-mile cruise, bypassing metro station Horn and September 30 safely arrived in Long Beach (California). There, far from prying eyes, in a quiet bay of Santa Catalina, the barge HMB-1 was waiting for him with a grab mounted on it. 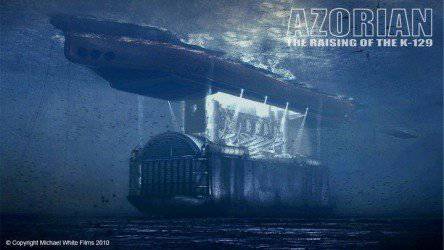 The barge was slowly loaded and fixed at a depth of 30 m, the “Glomar Explorer” stood above it; the flaps of its central connector were parted and two columns were lowered into the water; at this time, the roof of the barge opened, and the columns, like Chinese chopsticks while eating, moved the Clementine inside the vessel to the Lunar Pool. As soon as the capture got on board the ship, massive underwater shutters were closed and water from the internal pool was pumped out. After that, the ship began a huge, invisible to prying eyes, work on the installation of the grip, attach all cables, hoses and sensors.

The lowering and lifting of the Clementine deep-water capture is carried out with the help of a tubular column - a lifting tube, 5 kilometers in length. Each section of the pipe has a tapered cut, the sections are carefully screwed into each other, the grooves ensure reliable locking of the whole structure.

The actions of the “Glomar Explorer” were watched with interest by the Soviet sailors. The very purpose of the operation for them is not clear, but the fact of conducting deep-sea work in the middle of the Pacific Ocean caused suspicion among the command of the Soviet Navy.
The ship of the Chazhma measuring complex and the rescue tug of the SB-10 delivered the Yankees a lot of trouble. Out of fear that the Russians would take the “Glomar Explorer” by storm, they had to fill up the helipad with boxes and raise the entire crew to their feet. Alarming data came from the "Lunar Pool" - the wreck of the boat is radioactive, apparently one of the nuclear charges was destroyed.

Unfortunately, this is the end of the CIA report released on February 12 2010.
"Clementine" with parts of "K-129" rises aboard the ship, "Glomar Explorer" leaves with its prey for Hawaii ...

In October, 1992. CIA Director Robert Gates, at a meeting in Moscow, handed B. Yeltsin a videotape recording the burial ritual of 6 bodies from Soviet submariners from the K-129 crew. Three of them: sailor V. Kostyushko’s torpedo, senior sailor V. Lokhov’s underwater acoustics and sailor V. Nosachev’s senior torpedo, were identified by documents. The bodies of all six were placed in a container (the remains were radioactive). Then, in compliance with the Soviet naval burial ritual, 4 September 1974, under the chaplain’s prayer in Russian and English and under the anthems of the USSR and the USA, the container was lowered into the ocean. To honor the Yankees, the ceremony was held sincerely and with respect to the Soviet sailors.

Glomar Explorer continues its search in the depths of the World Ocean. Currently, a unique ship, chartered by Marathon Oil until March 2012, ironed the bottom near Indonesia.

In the end, the United States received a serious trump card in the Cold War, and the Azorian project was an outstanding achievement of the 20th century naval engineering. 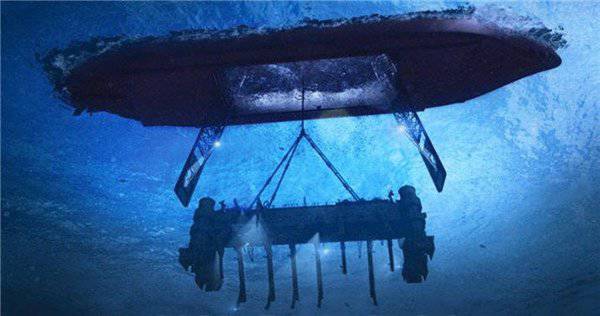 Ctrl Enter
Noticed oshЫbku Highlight text and press. Ctrl + Enter
We are
Washington is not ready to disclose all data on the operation "Azorian""Black Death" in Russia. 2 part
Military Reviewin Yandex News
Military Reviewin Google News
34 comments
Information
Dear reader, to leave comments on the publication, you must sign in.