Will the fate of the new strategic bomber B-21 be happy? Part of 1

B-21 will be the first strategic bomber, entered service with the US Air Force after the B-2A (pictured)


“There is no hope in hell, nothing will knock us out,” wrote the lead vocalist of the famous hard rock band Motorhead Lemmy in his single 1979, “Bomber” (bomber). Lemmy's confidence in the invulnerability of the aircraft can only be realized through design and technology.

In October 2015, the company Northrop Grumman received a contract from the Air Force to develop a new-generation strategic bomber for the United States. This contract followed a request for proposals for a new bomber published in July 2014 by the Ministry of Defense. The name of the new aircraft has not yet been chosen, but it received its designation B-21 (21 century) at a public presentation of the US Air Force, held at a symposium in Washington in February 2016. 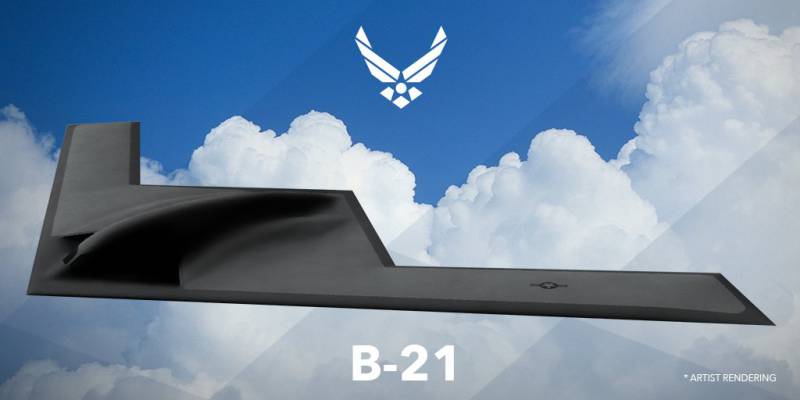 The US Air Force did not receive a new strategic bomber since the first Invisible Bomber B-2A Spirit of Northrop Grumman was adopted in December 1993, armed with an air regiment stationed at an air base in Missouri. The Air Force currently has a 21 machine, reinforced with 62 strategic bombers B-1B produced by Rockwell Collins / Boeing. B-1B bombers are limited to non-nuclear weapons, because after the signing of the strategic arms reduction treaty in 1991, they were deprived of the opportunity to carry air-launched cruise missiles. Today, the US Air Force strategic nuclear fleet includes B-2A aircraft plus 78 strategic bombers B-52H Stratofortress from Boeing.

The US Air Force did everything to strengthen its strategic component in the intermediate period between the adoption of the B-2A and today by commissioning the Lockheed Martin FB-22A aircraft. The manufacturer began in 2002 on a proactive basis to explore the possibility of developing a mid-bomber version of its excellent F-22A Raptor fighter with the intention of restoring the role played by General Dynamics F / FB-111A / D / E / F / G medium bomber. However, the 2006 Defense Review of the Year, in which the US military doctrine for the next 4 of the year is presented, has canceled this initiative. There was no movement in this direction over the next few years until a request for proposals was issued in July 2014 (see above).

When, during the reign of US President Jimmy Carter, the development of B-70A began in the late Advanced XMNS-80-i program under the modern Advanced Technology Bomber (ATB) program, the main concern of American strategists was the threat of Soviet intercontinental ballistic missiles (IDB) . These weapons systems included three-stage solid fuel rocket RT-2PM Topol produced by the Votkinsk engineering plant (remain in service), the development of which began in 2, and the RT-1977 UTTH rocket of the railway-based, which are intended for transportation and launch from a special the trains. Both of these missiles were of serious concern to the planning defense structures, especially their mobility, which increases their survivability compared with stationary ICBMs in launch mines. The land area of ​​the Soviet Union was 23 million square kilometers and therefore, the location and destruction of such targets can be compared with the search for a moving needle in a haystack. This task was solved by the Raytheon AN / APQ-22 radar of the B-181A bomber, which provided high-precision guidance by operating in the radio Ka-band (2-33,4 GHz), especially suitable for detecting and defining targets with high detail. 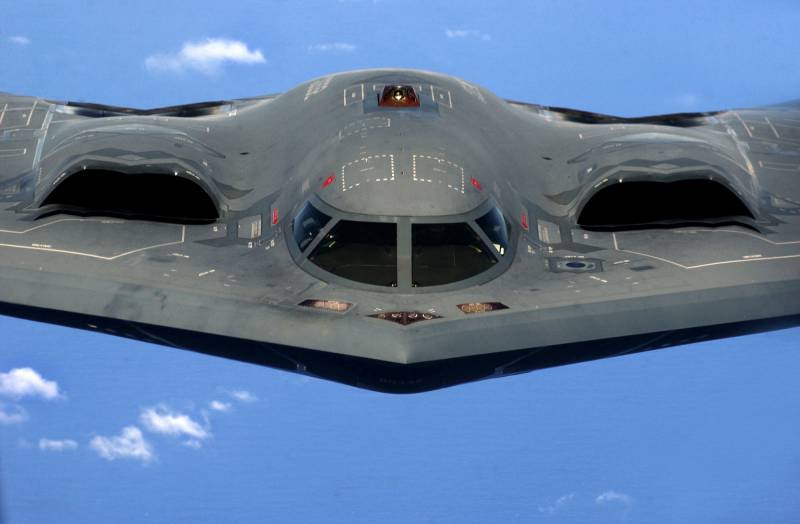 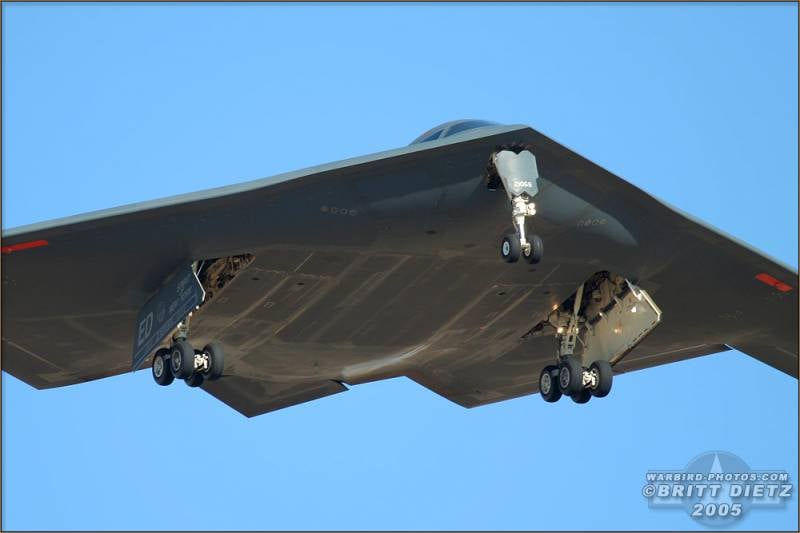 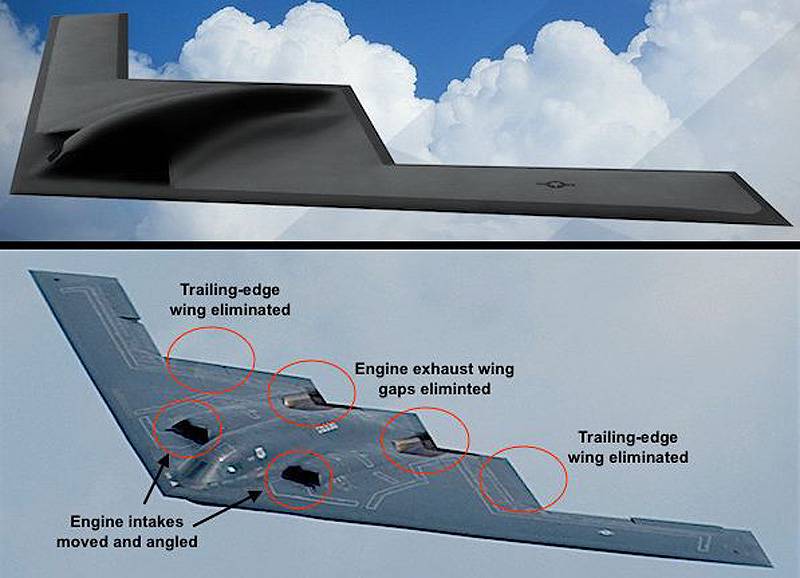 This radar can also operate in flight mode with rounding of the terrain, which would be necessary if the B-2A bomber were to search for and destroy targets in the territory of the Soviet Union. When performing these tasks, the B-2A would be forced to fly in the possibly most well-protected airspace, so its ability to remain invisible to radars was mandatory. For this ability, B-2A got its nickname “Stealth Bomber” (stealth bomber), and its main recognizable and distinctive feature was a strange “sleek” flying wing, similar to a boomerang. The shape of the aircraft and the widespread use of carbon fiber made it possible to achieve an effective reflection area (EPO) 0,01 m 2. It is important to note that the B-2A is still visible to radars, but it is difficult to detect and, most importantly, difficult to catch with active or semi-active radar homing heads of ground-to-air or air-to-air missiles. However, the fuselage configuration is just part of the story. The aircraft is equipped with Lockheed Martin’s AN / ZSR-63 active protection subsystem. Clearly, information on the AN / ZSR-63 subsystem is not available, although it allegedly uses active radar jamming technology, when incoming radio broadcasts are detected and analyzed and then retransmitted, possibly without a Doppler frequency shift (the phenomenon when the radio signal slightly changes its frequency after it will be reflected from the object). The ability to manipulate the Doppler shift may mislead the radar operator regarding the aircraft's position or speed, provided it can recognize a weak signal reflected from a B-2A aircraft. Last but not least, covert flight modes, such as rounding the terrain and shielding radiation due to the terrain, help to divert the aircraft into the radar shadow. 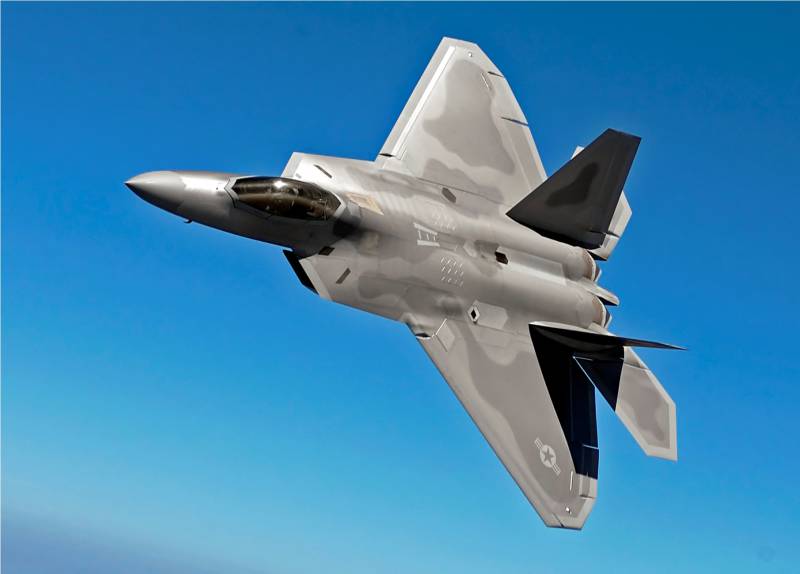 The F-22A was to serve as the basis for the FB-22 medium bomber project. However, this project did not go beyond the “paper airplane” stage and, ultimately, was closed

Low visibility made the B-2A, perhaps the most advanced bomber created during the Cold War era - a conflict in which he never had a chance to participate. The aircraft entered service after the collapse of the Soviet Union in December 1991. Yet this did not prevent the United States Air Force from using this aircraft, with its rather low level of unmasking signs in subsequent conflicts. Although his role was limited to delivering conventional weapons, he earned 24 recognition in March 1999, when he attacked several targets in Serbia during Operation Allied Force (ALLIED FORCE), an air campaign commanded by the United States that aimed to stop ethnic cleansing in Kosovo. Since then, the aircraft took part in the combat operations of the coalition forces in Iraq, Afghanistan and the last time in Libya in 2011. In the end, the B-2A bomber was created to participate in only one potential conflict - a nuclear war with the USSR and the Warsaw Pact countries, but later found itself in a more complex geopolitical space, in which it demonstrated its rather high efficiency.

The US Air Force does not forget about the changing geopolitical situation, developing B-21 for tomorrow's combat missions. “The B-21 bomber will penetrate the modern air defense system and perform tasks despite the so-called access-blocking / blocking zone (ZV / BZ),” said Major Robert Liz, a representative of the US Air Force. ZD / BZ is the main problem for the US Air Force. The former and potential opponents of America witnessed the ability of this aircraft to pass through their defenses and then hit particularly important targets, sometimes destroying or weakening the ground-based anti-aircraft defense system so that the following air strike forces could attack other targets with relative impunity. Serious concern to the United States is the development of new systems, such as the C-400 anti-aircraft missile system. The triumph of the Almaz-Antey production, which comes into service with the Russian armed forces, and which was sold to China. The C-400 still has to be tested under combat conditions and earn the respect of the pilots who will fly in its range. The 91H6E C-400 ground-based aerial surveillance radar can detect targets with 0,4 EPO at a distance of 230 km, while its ground-to-air 40H6Е missiles with semi-active and active radar guidance have an 400 km range. Fifth-generation fighters, such as the Sukhoy PAK-FA and MiG LMFS (light multi-purpose front-line aircraft), developed in Russia, as well as the Chinese Shenyang J-31, can seriously complicate the life of American aircraft in the future.

Major Lees expressed the opinion that the solution of the ZD / KB problem is actually at the forefront of the B-21 bomber project. “The need for a B-21 is based on moving in the direction of ... towards the greater ZD / KB philosophy. Consequently, a B-21 bomber capable of operating in such a space, possibly taking off from the mainland of the United States, must inevitably hold targets of all types under the gun. ” The US Air Force plans to use B-21 to continuously monitor and strike targets, using conventional or nuclear weapons. Unlike B-1B, which abandoned its nuclear obligations (see above), the B-21 bomber "will become part of the nuclear triad, being a means of obvious and flexible nuclear deterrence." The nuclear triad includes Ohio-class submarines of the US Navy with ballistic nuclear missiles (these submarines should be replaced in the next decade) and mine-based intercontinental ballistic missiles LGM-30G Minuteman-III.