July 27 2016
144
Some Western observers believe that without the participation of Russian athletes, the Olympic Games would have been a much less interesting event. The foreign press admits that the Russians committed “secret cheating”, but notes that without the Russians, the Olympics “will lose a lot”. In addition, all these investigations carried out in respect of Russian athletes, give geopolitics. 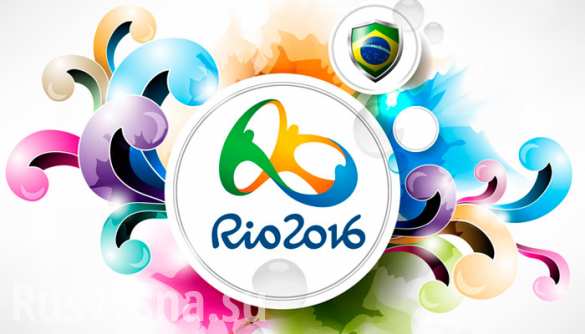 The International Olympic Committee (IOC) decided not to remove Russia from the Olympics in Rio de Janeiro completely. Some Russian athletes will still be admitted, despite the results of a recent scandalous investigation by WADA.

As reported by the central Russian press 24 in July, the IOC Executive Board allowed Russia to participate in the Olympic Games in Rio. The IOC has obliged members of the Russian national team to undergo additional anti-doping testing. Further decision on the admission of athletes will have international federations for sports.

The Minister of Sports of Russia, Vitaly Mutko, thanked the IOC for the decision on admitting the Russian national team to the Games.

It is also known that the president of the National Olympic Committee of the United States, Scott Blackmoon, supported the IOC decision regarding Russian athletes. “The IOC has taken a step in the right direction. Now it is important that the federations strictly follow the announced criteria for the admission of Russian athletes, and the IOC with all the responsibility to monitor compliance with these criteria. At the same time, it became clear that the existing anti-doping system does not work, it needs urgent reforming, ”Mr. Blackmun quotes "Lenta.ru".

However, there are already suspended Russian athletes.

"Lenta.ru," recalls that the Russian Olympic Committee lost a lawsuit against the World Association of Athletics Federations (IAAF) in the Court of Arbitration for Sport. The IOC upheld the decision of the latter. Elena Isinbayeva, who was among the disqualified athletes, is going to appeal to the European Court of Human Rights.

Journalist "The Wall Street Journal" Matthew Futterman expressed a curious opinion about the Olympics without the participation of Russian athletes.

He believes that an attempt to “punish Russians for doping” by completely depriving them of their rights to participate in the Games in Rio would make the Olympiad a “less interesting event.”

The author does not dispute the findings of WADA and agrees that athletes must be “clean” and compete purely in the fight. The Russians, the journalist reminds, were not “clean” at the Games in Sochi, because “Russian officials have contrived and replaced the“ dirty ”urine samples with clean, right under the nose of the international inspectors who were supposed to watch just that.” And it is clear that those athletes who came after the Russians at the Olympics in Sochi "could not but feel terrible." Russian athletes "were involved in such a scheme of deception, which would have done the honor of John Le Carre." Therefore, Futterman does not consider it fair to give Russian athletes the full opportunity to fight for victory in the Rio Olympics. But he says that the Olympic Games without the Russians "can lose a lot."

In his opinion, the Olympic Games were the most exciting spectacle precisely when representatives of the “two superpowers” ​​converged on the fields for competition. The journalist, “child of the cold war,” according to his own characterization, notes that he “got hooked on the Games in the 1970 and 1980's,” when there was a real ideological confrontation between East and West. The “Soviets” and “East Germans” were considered to be the “villains of the Games” in those years.

“We were convinced that they were all fraudsters,” the author recalls. “And their athletes often looked suspicious — like professionals, and after all, the Olympics should be a contest for amateurs.”

At that time, judging seemed to be infused with geopolitics. Soviet judges, as they thought in the West, gave purposely the “lowest scores” to Western gymnasts and skaters.

Today, V. Putin has made the Olympic Games and other international sports competitions an important part of the process of restoring Russia's power in the international arena, an American journalist believes. And it's hard to even imagine what the audience would see at the Olympics in Rio, if there were no Russian athletes at all.

“Yes, we all love to watch American athletes win medals. But without the Russian team, the Games will almost certainly result in two weeks of honor for the US team. Drama in the fight, one might say, will not. "

At the last summer Olympics without the Russians (1984, Los Angeles), the USA won the 174 medals. The next nearest country was Romania - 53 medals.

Fatterman does not dispute the recently released data from the WADA report, which outlines the grim role of top Russian sports officials and the FSB. However, he believes it would be unwise to completely and permanently ban Russians from participating in international sports.

The author also admits that the situation of modern times is strongly converging with the years of the Cold War, since Putin strengthened the well-known rhetoric, considering WADA as a tool for the next attack of the West.

There are other interesting responses to the situation with the upcoming Olympics.

In ancient Greece, this man recalled, the opposing city-states at the time of the Olympic Games were putting weapon. Bloody battles gave way to sports competitions. This ideal of peaceful competition remains the basic principle of the modern Olympic movement, the letter author indicates. And the International Olympic Committee has no right to betray this principle.

Of course, the author agrees with the conclusions of WADA, doping is the “scourge of modern sport”. Russian sports officials "behaved disgustingly," he recalls.

On the other hand, they are “not the only ones”, but it turned out that out of the twelve countries included in the initial list of suspects, only one Russia was singled out for punishment in the form of a ban.

Therefore, one cannot "deny that the reason is that Russia is the main geopolitical rival of the West." And the Olympics, which should serve as a “bridge between countries,” are now used as a tool to isolate and humiliate an alleged enemy.

There are other opinions in the Western press. In Germany, for example, some observers believe that the IOC was “afraid” and even went along with Putin.

Sports Browser «Frankfurter Allgemeine Zeitung» Peter Sturm is confident that the decision of the IOC to allow part of the Russian athletes to the Olympic Games speaks of the cowardice of the IOC and even of the “betrayal of values”.

The journalist writes that, by his decision, the IOC "betrayed all the values ​​that he supposedly defended." After all, Russia "at the state level" supported a whole system of doping, Sturm reminds. Who needs a similar Olympiad?

The IOC decision on the transfer of the right to make decisions to sports federations says “about the cowardice of the IOC leadership,” the correspondent is convinced. According to him, Putin will now “celebrate the decision of the IOC” as a “victory” over the West. Moreover, the Russian president will assume that he is dealing "with cowards."

Mentioned above The Wall Street Journal in the editorial also touched on the topic of fear and cowardice. The source of fear of the International Olympic Committee declared all the same Putin.

An ironic editorial notes that Putin is probably “able to scare.” Perhaps there is no other version to explain the IOC decision.

“If the IOC does not take its own anti-doping rules seriously, then why should others do it?” Writes the magazine.

By the way, there is one more interesting version. In Austria, they believe that the decision of the IOC could have been affected ... by Gorbachev's letter.

As the correspondent suggests, the final decision of the International Olympic Committee could have been influenced by the “last minute” letter by Mikhail Gorbachev.

Previously, Thomas Bach pointed out the primacy of the principle of the presumption of innocence, recalls the journalist, stating the need to find a balance between collective punishment and the rights of individual athletes.

The Nobel laureate Gorbachev, who described some “principle of collective punishment” as unacceptable, spoke in a similar way in his letter.

Markku Dutler himself is confident that the IOC decision will only increase the gap between sport and the anti-doping struggle, and at the same time “between Russia and the rest of the world.”

As it turned out, it is boring to live without Russia (with or without doping) abroad. The West needs a rival - political, sporting, ideological, whatever. The United States is not interested in collecting Olympic medals, if there is no one to fight for them.

Some journalists believe that the current situation is reminiscent of the times of the Cold War: in the years of the USSR, geopolitics penetrated through sport. Other observers are reminded of the Olympic principles, according to which hostility should give way to sporting ideals. It was not for nothing that Mikhail Gorbachev, a well-known supporter of democratization and glasnost, ardently condemned the “principle of collective punishment,” and the International Olympic Committee was quick to agree with him.

Well, American fans and athletes at the coming Olympics will not be bored.


Observed and commented on Oleg Chuvakin
- especially for topwar.ru
Ctrl Enter
Noticed oshЫbku Highlight text and press. Ctrl + Enter
We are
Their fate will be decided by others.How WADA and IOC amicably reduce themselves to the level of the plinth
Military Reviewin Yandex News
Military Reviewin Google News
144 comments
Ad