Moscow, take a lot of money and give up Assad

July 26 2016
132
Riyadh is ready to offer Moscow major investments and cooperation with the monarchies of the Persian Gulf. But not just like that. The Saudis will give the Kremlin money only if the latter gives up their stubborn support for Bashar al-Assad. The Saudi Foreign Minister reported this in an interview with Politico. In his opinion, the days of Assad are still “numbered”, and the Russians should hurry with a profitable “deal”. 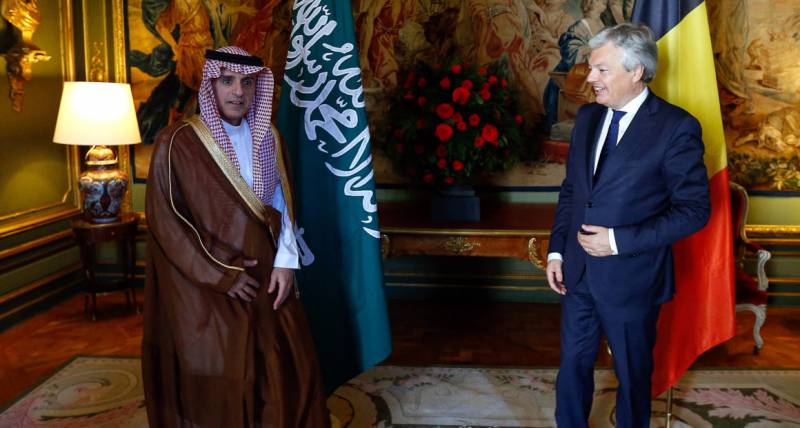 In the interview "Politico" (Brussels) Saudi Foreign Minister Adel al-Jubeir (who, incidentally, was educated in the West and fluent in American English and German) advised never to write off Saudi Arabia. He made it clear that change is now coming in the diplomacy of the ultraconservative kingdom.

While in Brussels, Al-Jubeir announced the kingdom’s commitment to moving from an oil strategy in the economy to “diversity” and expressed a desire to attract foreign investment into the country. True, all changes will occur "gradually." And yet the kingdom will now be more open to business than before. Among other things, Al-Jubeir pointed out opportunities for investors in the mining industry, defense, solar energy, tourism and entertainment (Brussels journalists questioned the last two points, recalling the "Puritan rules of the Wahhabi version of Islam").

The minister arrived in Belgium on the eve of the first anniversary of the West’s nuclear deal with Iran, which led to the lifting of sanctions against Tehran (in January). He met with the head of the EU foreign affairs agency, Mrs. Mogherini. His message to the EU was clear: Saudi Arabia should not be removed from the possibility of any negotiations on the future of Syria. Despite Iranian and Russian support for the regime in Damascus, it would be wrong to think, as some people in Europe do, that Assad has a political future in Syria, al-Jubeir noted.

As for Moscow, the minister noted that Saudi Arabia is ready to cooperate with its “brother” in oil production. Russia, which fell under EU sanctions “because of the annexation of Crimea in 2014,” could have access to the GCC market (Gulf Cooperation Council of the Arab States), and a large package of investments, which would turn out to be more possible investments of China. For Moscow, "it would be reasonable" to promote relations with the Saudis, the minister said, and not with Assad.

Saudi leaders know that Vladimir Putin wants to gain a foothold in the Middle East again.

The days of Assad are “numbered,” the foreign minister said, so “make a deal before it's too late.”

Probably, let us add that such an obvious proposal made by Russia, albeit through a Brussels-based newspaper, is part of the strategy, which al-Jubeir told Belgian journalists. The development strategy is calculated to 2030 year and compiled by Prince Mohammed bin Salman, the influential son of King Salman. According to Al-Jubeira, the second foreign minister in stories Sadovskaya Arabia, which does not belong to the royal family, economic reforms should go in parallel with social transformations in the country. He also believes that, despite the rise of Iran, the decline in oil prices and the actions of the IG militants, the West should not underestimate the influence of the kingdom and its stability. Saudi Arabia has experienced 1950's regional upheavals, 1970 upheavals, the harsh times of suppression of dissent in their homeland and, finally, the Arab spring of 2011. The kingdom will endure everything. Therefore, you should never write off Saudi Arabia.

Statements with proposals to Russia for their brazenness go beyond all limits, but from the point of view of the Saudis there is nothing shameful about them, says Nikolai Sukhov, an employee of the Institute of Oriental Studies of the Russian Academy of Sciences. “If you call a spade a spade, then Al-Jubeir offered Russia to sell its ally for a specific amount of money. Let not for thirty dinars, and Assad is far from Christ. But the very thought that Moscow will be ready to consider such a proposal is an insult unheard of, ”said the expert. Reedus.

According to the expert, in Riyadh and did not think to humiliate Russia with such a proposal. This is the Saudi mentality: they are used to buying anything in the Middle East. True, the Saudi diplomat did not take into account that Russia is not the Middle East and does not trade for money with its allies, I'm sure Sukhov.

“For the second decade, the Saudis are“ rolling up ”to Russia with proposals that are more attractive to one another, he says. “But in return, at the same time, they require such steps, to which no country preserving its reputation will agree. Generally, about Riyadh, a long-standing opinion has emerged in the world as about “kings of garbage”, and after talking with their representatives, foreign politicians sometimes want to wash their hands ”. In addition, with one hand offering Russia “insane economic benefits,” with the other hand, the Saudis are sending extremist preachers to its territory.

Talks about the promises of Saudi Arabia in exchange for concessions are not the first decade. Believe this is not worth it, warns the expert of the Center for Analysis of Strategies and Technologies Konstantin Makienko. According to him that lead "Vedomosti", Saudi Arabia lured Russia in the mid-2000s with a “carrot” in the form armory deals. Moscow in exchange for the deal was to abandon the idea of ​​supplying S-300 systems to Iran. However, as you know, in 2010 the contract for the S-300 was canceled by Moscow, and after that the talk about the deal with the Saudis ceased.

Let us ask ourselves: where did Saudi Arabia have such confidence in its strategy? Why the Saudis do not doubt that Assad will fall soon and why persistently "roll up" to Russia?

It must be assumed that the reason is not a revision of the country's oil life and the impending diversification of the economy (up to the all-round development of the “tourism” and “entertainment” spheres), which Mr. Al Jubeir told in Brussels.

It is oil that is today the foundation on which ideologues of the development of Saudi Arabia are going to build a building for change. Despite the decline in the price of “black gold”, Saudi Arabia in June 2016 became the leading supplier of oil to China. Here she beat Russia, which was the leader in the previous three months.

The pressure on Russia in the form of “proposals” and generous eastern promises is also explained by the poor economic situation in Russia: due to low oil prices and Western sanctions, the standard of living in the country has greatly decreased. Actually, this is why the Saudi minister speaks of Russia, who has been sanctioned by the EU for sanctions "because of the annexation of the Crimea." With this, he connects the proposal for the share of Moscow in the GCC market and a large package of investments - yes, such that it cannot be compared with the Chinese one.

Difficulties in the raw material economy of Russia remain, and the West is in no hurry to establish relations with Moscow and predictably extends sanctions. Saudi Arabia will take advantage of all this. And these interests are clear: throw off Assad and pinch the bit of possibly rising Iran. Neither the first nor the second goals are achieved without a “deal” with the Russians. That is why al-Jubeir and his superiors are so persistent in their diplomatic messages.