July 22 2016
156
The perception of the Crimean War is like an iceberg. Everyone remembers the top from school: the defense of Sevastopol, the death of Nakhimov, the flooding of the Russian fleet. They judge those events, as a rule, with cliches embedded in the heads of many years of propaganda. Here is the "technical backwardness" of Russia, and the "shameful defeat of tsarism", and the "humiliating peace treaty." The phrase “The Crimean War showed the rottenness and powerlessness of serf Russia” (V. I. Lenin. “Peasant reform” and the proletarian-peasant revolution ”) became canonical for Soviet textbooks. The true scale and significance of war remains little known. It seems to many that this was some kind of peripheral confrontation, far from the main centers of Russia.
The simplified scheme looks straightforward: the enemy landed troops in the Crimea, defeated the Russian army there and, having achieved his goals, was solemnly evacuated. But is it?


And Shamil who joined them

Three empires (British, French, Ottoman) and one kingdom (Piedmont-Sardinia) came out against Russia. What is Britain of those times? A giant country, an industrial leader, the best navy in the world. What is France? The third world economy, the second fleet, a large and well-trained land army. The union of these two states has already given such a resonant effect that the combined coalition forces had incredible power. But there was also the Ottoman Empire.

Yes, by the middle of the XIX century the golden period was left in the past and it even began to be called “the sick man of Europe”. But this was said when comparing with the most developed countries. The Turkish fleet had steamboats, the army was numerous and partly armed with rifled weapons, the officers were sent to study in the West. In addition, foreign instructors worked on the territory of the Ottoman Empire itself.

By the way, in World War I, having already lost almost all of its European possessions, “ailing Europeans” defeated Britain and France in the Gallipoli campaign. And if the Ottoman Empire was so exhausted, then it must be assumed that it entered the Crimean War as a much more dangerous adversary.

The role of the Sardinian kingdom usually does not take into account at all, and after all this country has set against us a 20,000 well-armed army. Thus, Russia was opposed by a powerful coalition.

What are the goals pursued by the enemy? According to his plans, the Aland Islands, Finland, the Baltic region, the Crimea and the Caucasus should be rejected from Russia. The Kingdom of Poland was restored, and in the Caucasus an independent state, Circassia, was created, vassal in relation to Turkey. The Danube principalities of Moldavia and Wallachia, which were under the protectorate of Russia, were supposed to be transferred to Austria. They wanted to divide the trophies as follows: the Baltic states - Prussia, the Aland Islands and Finland - Sweden, the Crimea and the Caucasus - Turkey. Cherkessia was received by the leader of the mountaineers Shamil - by the way, during the Crimean War, his troops also fought against Russia.

But "backward, powerless and rotten" Russia did not leave a stone unturned from these projects. The line under the Crimean War was summed up by the Paris Congress 1856 of the year. According to the agreement, Russia lost a tiny part of Bessarabia, agreed to free navigation on the Danube and the neutral status of the Black Sea.

Let us turn to the second important question - to the "technical backwardness of serf Russia." When it comes to this, they recall: in Britain and France, the army was equipped with rifled guns, and our soldiers — outdated smooth-bore guns. The advanced countries of the West have long since gone over to steamboats, Russian ships sailed. It would seem that everything is obvious and backwardness is evident. You will laugh, but we also had rifled guns and steam ships. Yes, the fleets of Britain and France were significantly ahead of Russia in the number of ships. But these are the two leading maritime powers. 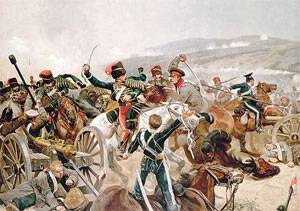 It must be admitted that the enemy had much more rifled guns. But it is also true that there were rocket weapons in the Russian army. Moreover, the combat missiles of the Konstantinov system significantly exceeded their Western counterparts. The Baltic Sea was securely covered by Boris Yakobi’s mines. This weapon also belonged to the best world models.

However, let us analyze the degree of “military backwardness” of Russia as a whole. To do this, it makes no sense to go through all types of weapons, comparing each technical characteristic. Just look at the loss ratio in manpower. Obviously, we should have them fundamentally higher if Russia is really seriously behind the enemy in armaments.

The numbers of total losses in the sources vary greatly, and the number of those killed is about the same, so we turn to this indicator. So, for the war, 10 240 people were killed in the French army, 2755 in England, 10 000 in Turkey, and 24 577 in Russia. About five thousand people add to the losses of Russia. So many were dead among the missing. Thus, the total number of dead is considered equal to 30 thousands. That is, the ratio is not at all disastrous, especially considering that Russia fought half a year longer than England and France.

Of course, in response they will say that the main losses fell on the defense of Sevastopol, here the enemy stormed the fortifications, hence the great sacrifices. That is, the "technical backwardness" of Russia was partially offset by the advantageous position of the defense.

Well, consider the very first battle outside Sevastopol - the battle of Alma. A coalition army of about 62 thousands has landed in the Crimea. To detain the enemy and gain time to prepare for the defensive structures of Sevastopol, the Russian commander Alexander Menshikov decided to give battle along the Alma River. At that time, he managed to collect only 37 thousands of people. He, too, had fewer guns than the coalition, besides, the enemy was also supported from the sea by ship fire.

“According to one testimony, the Allies lost Alma 4300 on the day, according to others - 4500 people. By later calculations, our troops lost officers and 145 lower ranks in the Battle of Alma 5600, ”academician Tarle reports in his fundamental work Crimean War. It is constantly emphasized that in the course of the battle, our shortage of rifled weapons affected us, but note that the losses of the parties are quite comparable. Yes, ours turned out to be more, but the coalition had a significant advantage in manpower. What does the technical backwardness of the Russian army?

An interesting thing: our army was almost twice as weak in number, and it had fewer guns, and the enemy’s fleet from the sea shelled our positions, in addition, the backward weapons. It would seem that in such circumstances, the defeat of the Russian should be complete. And the result? After the battle, the Russian army retreated, maintaining order, the exhausted enemy did not dare to organize prosecution, that is, his movement to Sevastopol slowed down, which gave the city’s garrison time to prepare for defense. The words of the commander of the British First Division, the Duke of Cambridge, perfectly characterize the state of the "winners": "Another such victory, and England will not have an army."

The siege of Sevastopol lasted for almost a year. At the cost of heavy casualties, the enemy occupied a part of the city. There was no “fall of Sevastopol”, the Russian troops simply moved from the southern to the northern part of the city and prepared for further defense. Despite all the efforts, the coalition has achieved almost nothing. For all the time of hostilities, the enemy captured a small part of the Crimea, Bomarzund on the Aland Islands and Kinburn on the Black Sea, but at the same time suffered a defeat in the Caucasus. Meanwhile, at the beginning of 1856, Russia concentrated over 600 thousands of people on the western and southern borders. This is not counting the Caucasian and Black Sea lines. It was possible to create numerous reserves and gather militias.

Russia was ready to fight and rose to the Second Domestic with all the ensuing consequences for the enemy. But here the alarming news came from the diplomatic front: Austria openly joined Britain, France, the Ottoman Empire and the Sardinian kingdom. A few days later, Prussia made threats to Petersburg. By that time, Nicholas I died, his son Alexander II was on the throne. After weighing all the pros and cons, the king decided to start negotiations with the coalition.

As mentioned above, the treaty that ended the war was not demeaning. The whole world knows about it. In Western historiography, the outcome of the Crimean War for our country is estimated much more objectively than in Russia itself:

“The results of the campaign had little impact on the balance of international forces. It was decided to make the Danube an international waterway, and to declare the Black Sea neutral. But Sevastopol had to be returned to the Russians. Russia, previously dominant in Central Europe, has lost its former influence for the next few years. But not for long. The Turkish Empire was saved and also only for a while. Union of England and France did not reach their goals. The problem of the Holy Lands that he had to solve was not even mentioned in the peace treaty. And the Russian Tsar annulled the treaty itself in 14 years, ”Christopher Hibbert described the outcome of the Crimean War. This is a British historian. For Russia, he found much more correct words than Lenin.

Ctrl Enter
Noticed oshЫbku Highlight text and press. Ctrl + Enter
We are
On the other side of the “red” and “white”. Izborsk Club ReportRussian revolution: the debunking of myths and nontrivial view
Military Reviewin Yandex News
Military Reviewin Google News
156 comments
Information
Dear reader, to leave comments on the publication, you must sign in.