July 20 2016
26
“Friendly fire” is when people shoot at their own. The reasons can be very different: from pure psychology to elementary stupidity. For example, on the eve of the Second World War, the white star was the identifying badge of the Air Force, in the center of which was a small red circle. The Japanese Air Force also has a red circle, only a big one. Very large compared to the US. But when the war began and the American aircraft took to the line of fire, the pilots sent messages about the facts of "friendly fire." It turned out that in a stressful situation of air combat or the reflection of a raid, the eye first sees this red circle. Size is taken into account, but not all. And the consequence is a friendly fire! The circle was removed and the cases of “friendly fire” became much smaller. 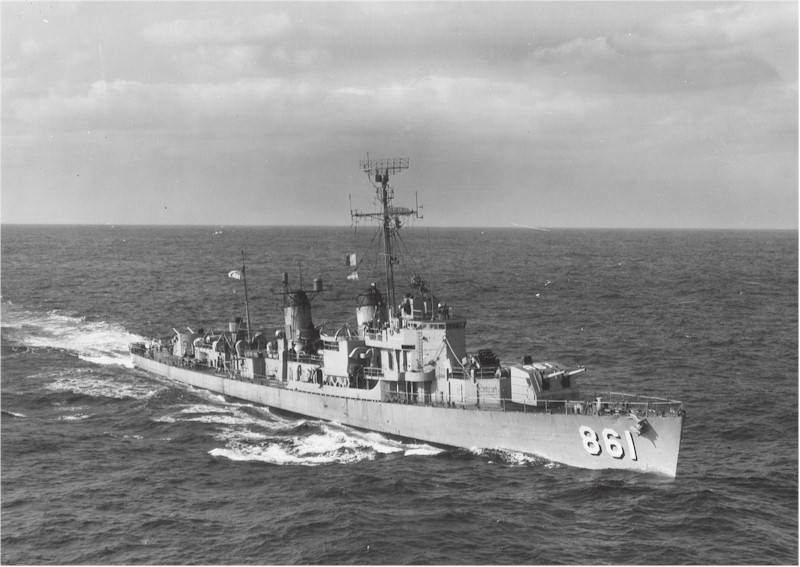 The US destroyer Harwood belonged to ships of the same type as ships transferred to Greece and Turkey in the form of military assistance and participated in the “Battle of Paphos”.

There are cases when their cars and Tanks they were mistaken for strangers simply because "the eye was blurred" or there was poor visibility. But the most probably most odious case of “friendly fire” was, however, related to the actions of the relevant services, and took place relatively recently during the Turkish invasion of Cyprus, which began on the night of July 20-21, 1974. This invasion began in the very last days of the reign of the regime of the so-called “black colonels” in Greece.

It all began with the fact that on the island in the 1964 and 1967 years there were already cases of inter-ethnic discord in relations between the Greeks and the Turks, so that the situation there was very tense.

But more - more: in July 1974, the legally elected President of Cyprus, Archbishop Makarios, with the support of the Greek junta, was removed from power, which passed to a group of radicals led by Nikos Sampson, one of the leaders of the Greek underground organization EOKA-B, who demanded to join Cyprus to Greece . Although the new leadership announced its loyalty to the Turkish population of the island, Turkey, knowing it as an extremist and anti-Turkish person, as a retaliatory step on July 20, 1974, sent an army of thousands of people to the island, causing hostilities in Cyprus . It all ended as a result of the division of Cyprus into North and South, and the northern part was not recognized by anyone except Turkey. The southern part - the actual Republic of Cyprus - is a member of the EU, and for many years now it has been suing Turkey for compensation for damage from military actions. 10 May 12 of the year The Grand Chamber of the ECHR in Strasbourg issued a verdict in favor of the Republic of Cyprus to recover compensation in the amount of 2014 million euros from Turkey for violating the provisions of the European Convention on Human Rights in Northern Cyprus from 90, of which 1974 million were to compensate for causing moral harm to the relatives of the Greek Cypriots who disappeared during these events, and the rest of the 30 millions received by the Greek Cypriots from the Karpas Peninsula. But Turkey refused to comply with this decision of the European Court, and officially. However, they can be partly understood. Although North Cyprus now belongs to Turkey, he got it at a high price, and the blame was just the “friendly fire” provoked by… Cyprus intelligence!

History this was called the "naval battle of Paphos" (July 21, 1974), and this was a real battle, yes, it just happened between ... Turkish fleet and ... Turkish aviation, and in fairness is the most revealing example of "friendly fire" in its consequences after the end of World War II.

And it was that when, on the night of 20 on July 1974, the Turkish army launched an invasion of Cyprus, the Greek army simply could not resist it either by the number of its soldiers or by armament, and was forced to use ingenuity and cunning.

Again, it was the case that on July 19, that is, 12 hours before the invasion, a large amphibious ship Lesbos sailed from the port of Famagusta in Cyprus, carrying a replaceable contingent of Greek soldiers, 450 people, who served in Cyprus . This was noted by the Turkish reconnaissance aircraft RF-84F "Thunderflesh" and reported that the ship was going without any escort, that is, it was an easy target.

Well, July 20 and the warships of Greece appeared near the island of Rhodes, and, as soon as their commanders accepted messages about the beginning of the invasion, some of them headed for Cyprus. The Turkish military was aware of this according to aerial reconnaissance information, which was conducted by the Grumman S-2E Tracker, who reported that, judging by the course, they were heading towards Lesbos. Based on this information, two orders were issued - the Air Force and the Turkish Navy that these ships should be stopped at any cost. It was planned that aviation would strike them first, and the ships would finish what was left and - most importantly, they would not allow the Greeks to land troops.

However, the Turks observed only during the day, and at night all the Greek ships from their radar disappeared. Moreover, the Greek ships did not go to Cyprus at all, but for some reason (and why no one knows!) In the dark they changed their course and went to the island of Rhodes.

In the meantime, three Turkish destroyers Adatepeen, Kocatepeen and Tinaztepeen near Kyrenia were supported by Turkish troops with fire. And then, knowing that the Turks were listening to radio broadcasts, the Greek intelligence from Paphos conveyed a message in which she thanked the “Greek” ships for their timely arrival. The Turks intercepted him, but for some reason did not check, and immediately gave the order to immediately attack the Greek ships!

At about the same time, at around 10 in the morning, three Turkish destroyers also received orders to go to Paphos and attack ships under the flag of Cyprus. Both Turkish and Greek destroyers belonged to the same class, got to those and to others within the framework of military assistance, and outwardly looked like twin brothers. Moreover, they did not have electronic identification systems "friend-foe". Moreover, the Turkish command also informed its pilots that there are no Turkish ships in this area! So the pilots received the order to "fly and bomb" ... any warships and complete the task as soon as possible.

The planes arrived, the pilots noticed the “Greek ships” below, but for some reason the Turkish flags did not notice, and they didn’t pay attention to the warning signals from the ships, and in 14: 35 an attack began on the destroyers. All three ships received serious damage. At Kocatepeen, a direct information bomb was destroyed by a direct bomb hit, so the target designation system failed and it could not defend itself against attacks! The pilots noticed this, redoubled their efforts, causing the ship to explode in an ammunition depot, and it sank, killing Turkish sailors 78 (13 officers, the captain of the ship and 64 ordinary crew members, 42 people were rescued by an Israeli ship and later delivered to Haifa. According to some reports, one F-104G aircraft was also shot down by fire from ships, but Turkey also refused to admit the loss of the aircraft.

As always, alongside tragedy, a farce went hand in hand. It turned out that a Turkish plane was shot down the day before in Kirinia, and the pilot who was in Cyprus, who had escaped from it, was able to reach the pilots of the attacking aircraft on the radio. He tried to explain to them that they were attacking their own Turkish ships. Those asked him to name the code word of the day, but he could not know him, because they shot him down the day before! As a result, the pilots laughed at him and noticed that he was good, speaks good Turkish, and continued to bomb the ships that were near the coast. Dropping all the bombs, they flew away, and the damaged destroyers asked for help and were towed to bases, where they were repaired for several months!

At the same time, according to Turkish data, as a result of this incident 54 soldiers were killed. However, immediately after the “battle”, the Turkish media announced an outstanding victory won over the Greek fleet. But then, after reports from the Western newspapers about the destroyed destroyer, all these statements disappeared immediately. The loss of the ship Turkey recognized 25 July. Such is the "friendly fire" and such are its consequences!