July 19 2016
16
It is clear that changing the armor would be much more expensive than changing the outerwear. So it is hardly surprising that the knights very often put clothes on them. And they did it in the times when the “white armor” still existed and when they became the main protective equipment of the knight. 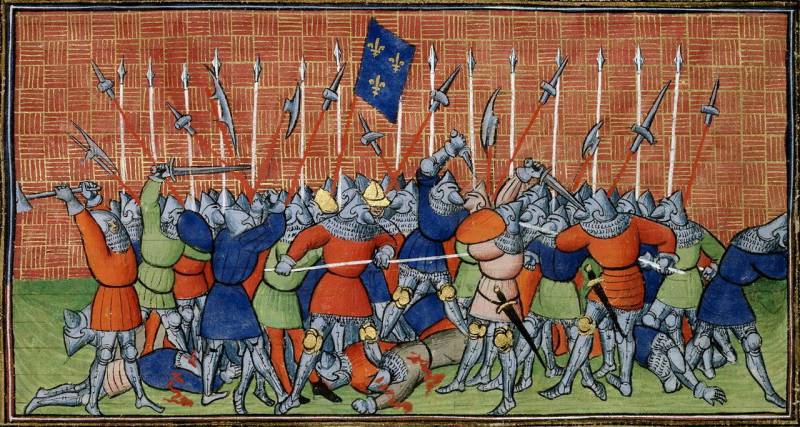 Battle of Kurtr 1302. Miniature from the “Chronicle of France Saint-Denis”. British Library. As you can see, the combatants no longer wear long surcoats, but they all wear something like a jacket with sleeves over the armor, and the jacket is clearly quilted. Floors do not reach the knees. 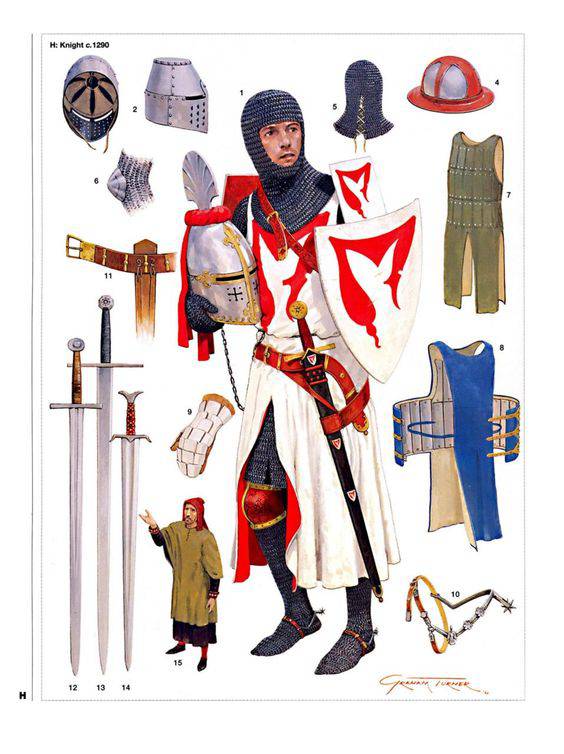 And this is a drawing of the famous contemporary British artist Graham Türner. On it is a knight in surco 1290 of the year. But then it turns out that by the time of the Battle of Kurtr, which occurred only 12 years later, the “knightly fashion” had time to change a lot.

But if we rewind tape stories"Not forward, but back, in the 1210 year, then again we can see that the actual armor is clearly improved, but the surcoat and its cut did not change too much. However, the 1290 robe of the year has become much more elegant, which is also certain. 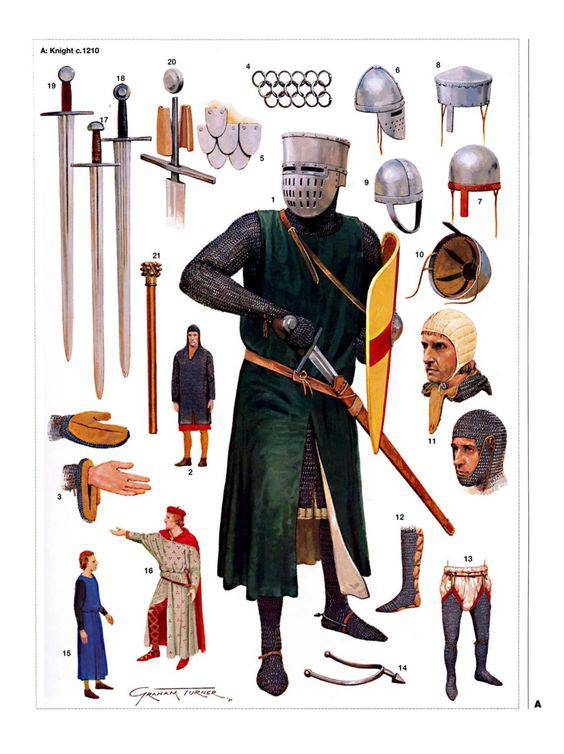 In the movie "Black Arrow", where it happens during the war of the Scarlet and White Rose, the people of Sir Daniel are wearing the "jackets" of the head flowers of their lord, but what is not visible under them. Cinema - there is a movie. But there is no doubt that fashion existed as for clothes that had to be worn over armor, as well as fashion for not ... wearing. However, the "bare" armor, as we have already learned about it from the two previous materials, is often covered with clothes. So, looking at some armor in museums that have been preserved since then, we sometimes do not even suspect that we are not looking at what our comrades and enemies of their owner saw! 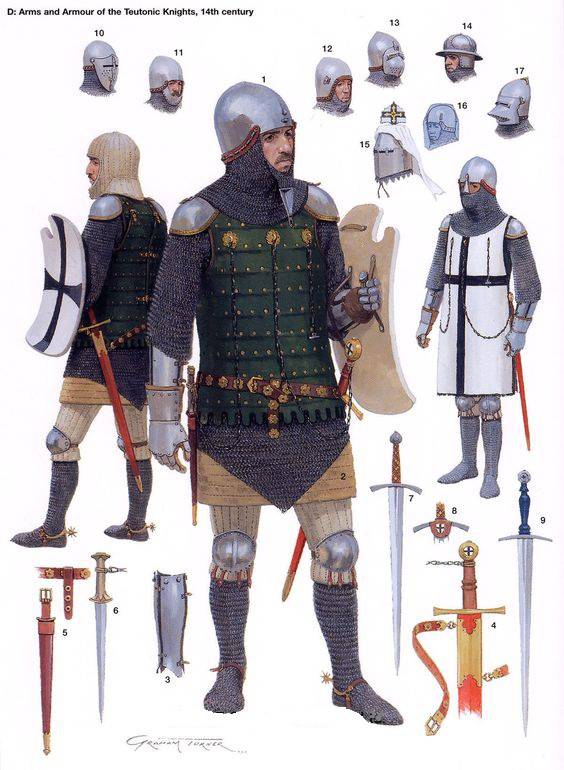 Teutonic Knight 1410 Graham Turner. Noteworthy is the Bretash Bishop (1), fastened to the helmet and to the barmian. In theory, he defended his nose from contact with the "big helmet", and when the helmet was removed ... just protected his nose, without interfering, however, looking around.

By the way, the fashion itself to have stamps on clothes did not go anywhere even after the same surprise, for example, went out of fashion. It seems that everyone has already seen the effigy of the “Black Prince” in his famous Djupon with heraldic lilies and leopards embroidered on it. But there was a mass of knights both in England and on the Continent who wore the same ones! Again, when “white armor” appeared around 1410, they continued to wear padded clothes. 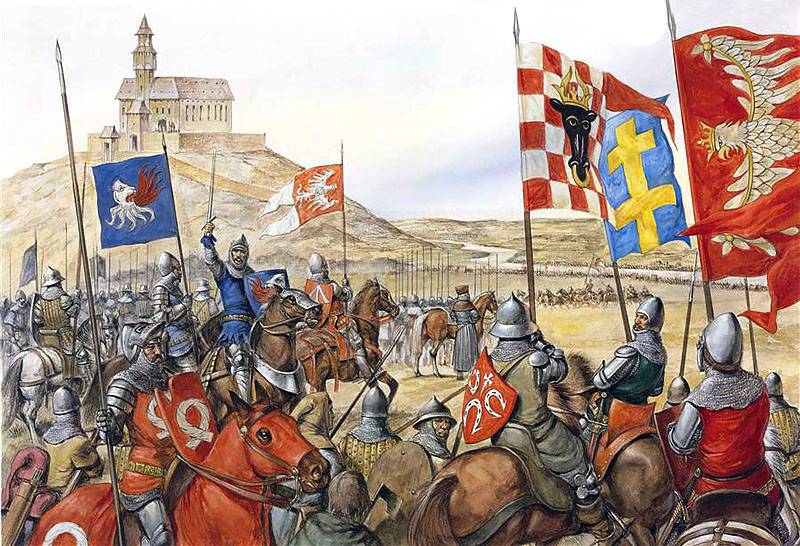 "Greuvald battle". Illustration of Richard Hook. Now let us remember what year it is and look at the riders' clothes. In the "bare armor" does not appear one. And this is not the artist's imagination. There are miniatures of the time, this picture confirms.

But now 100 years have passed, and what do we already know about this time absolutely exactly? Well, for example, that the soldiers sent in 1513 from the city of Canterbury (England) served on ships, had armor on top of their armor, and on their chest and back they had an image of a Cornish Jacket. In 1522, the “military people” from Shrewsbury carried a emblem on their clothes - the head of a leopard, and riders from Coventry in 1542, sent to the Scottish border - for some reason embroidered on an elephant's jacket. It is clear that these were not knights, but as for the soldiers, dressed in armor like knights, such clothes in the XVI century were already the norm for them.

A kind of "uniform" was not only clothing, but also elements of protective weapons, such as helmets, which began to be produced in large quantities and completely identical in appearance. One of them was, for example, a helmet barbut, very convenient for mass fabrication, which appeared at the end of the 14th century. in Italy. Outwardly, he was very similar to the "Corinthian helmet" of classical Greece and had the same T-shaped slot on the front part for breathing and viewing. Such helmets were very suitable for infantrymen and arrows, but were also used by knights. For example, they are equipped with 1450 Italian armor from the Art Gallery in Glasgow. They also spread widely in Venice, where they were worn by crossbowmen and heavily armed Venetian infantrymen, as described in the book by D. Nicolas “The Venetian Empire. 1200 - 1670 ”, which he wrote in collaboration with the artist and historian C. Rotero. 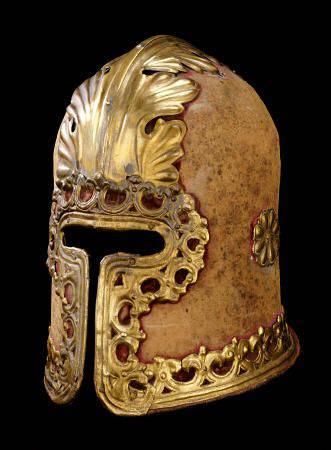 Italian barbute XV century., Covered with fabric and chased jewelry. Interestingly, only he was covered with it, or were some parts of the armor bundled with him also covered with it? London. Christie's auction.

Italian armor, according to British historians D. Edge and D. Paddock, became popular in England during the War of the Scarlet and White Roses, which began almost immediately after the end of the Hundred Years War. Use French armor was moveton, well, and Italian at the time. But English gunsmiths - by origin mainly Italians - added many elements characteristic of German armor. So, for example, the “heart-shaped” branches of the right and left knee pads were much smaller than on the armor brought directly from Italy. 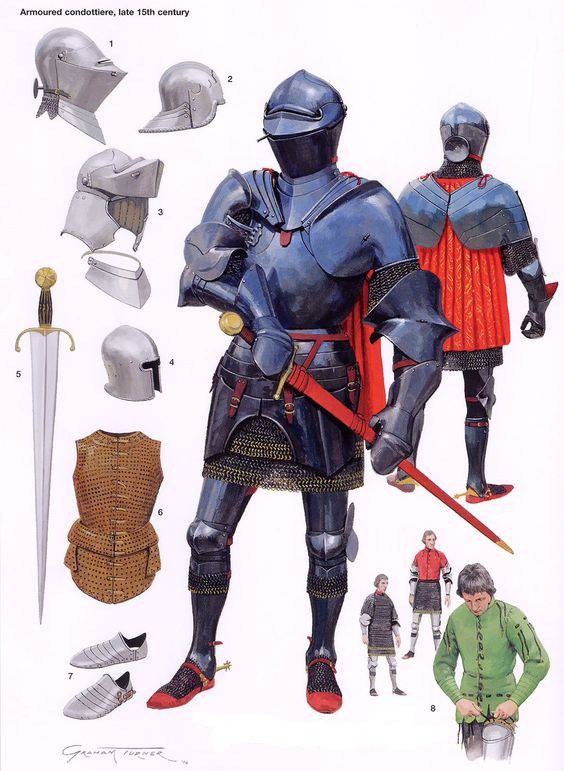 Knight end of the XV century. in black blued armor of the Italian sample. Helmet Arme (1), Salad (2), Barbut (4). This is how "arme" opened up for the convenience of dressing on the head. A typical piercing sword (5). Brigandine (6). Sabatons - knight shoes (7). Different types of clothing (8). Fig. Graham Türner.

But the Italian masters worked in other European countries, not only in England. Many left for Tours, Lyons and Bordeaux, and in Spain they worked in Burgos and Seville, where the traditions of the Arabic school were mixed with the European school, especially since many of the Spanish gunsmiths belonged to Morisco - baptized Moors. For example, in Spain for a long time did plate armor of the type brigandine. Spanish masters have created a helmet cabinets, which has become popular in Europe. The achievements of some masters at that time rather quickly became an object of imitation of others, who, without shame, put on their products the stigma of better-known gunsmiths, and, accordingly, the concept of fashion and ... "mass culture" arose. In this case, knightly!

For example, along with the general tendency to improve armor, protection for hands changed especially quickly. Mittens and gloves of chain mail began to be made from metal plates with flexible joints, which made it easier to work with weapons, and security increased. There were gloves with separate plates for each finger, a solid plate that protected the entire brush and a separate articulated cover for the thumb, and also gloves of the mixed type. Interestingly, the trend - more details - more expensive armor is not visible! For example, the armor of the Spanish king Ferdinand of Aragon (Ferdinand the Catholic), the end of the XV century. (at present it can be seen in Vienna) such very gauntlets of a very simple device. 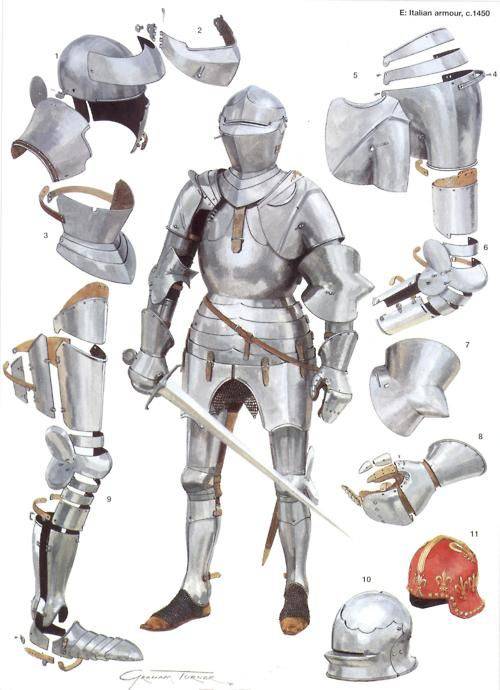 Italian armor 1450. Helmet of arm in unassembled form (1). The visor took out the studs on the hinges, and it was removed. A bevor or a buvier (chin rest) could be worn on top of the visor and shoulders, and held back from the strap - all an extra layer of iron! For greater flexibility, a half-box (shoulder) could have riveted plates attached to it, which overlapped one another as a tile (4). The left shoulder pad in Italian armor has always been larger than the right (5). So, God forbid, there was no open space anywhere in the armor, on the same wambras metal plates “Lame” (6) were used. The left elbow pad has always been larger than the right (7). The gauntlet (8) usually had one big plate that covered all the fingers. On the right plates there were two for greater flexibility. Cuis (9) or a leggings had a number of leather parts with holes for straps to connect it with a doublet. The mane also had rows of plates for the lame and was attached to the leg with hooks and straps. Italian Salad 1450 (10). Italian Salad with 1480 Fabric Covering (11). Fig. Graham Türner.

D. Nicole, in his article “Ferdinand Catholic” in the journal “Military Illusteritd”, published in 1992, noted this fact and wrote that, apparently, if the king himself wanted to have such “gloves”, there is no reason to think that then the plate gloves were perfect then others. That is, they were perfect in our opinion. And then the knights thought like ... thought! 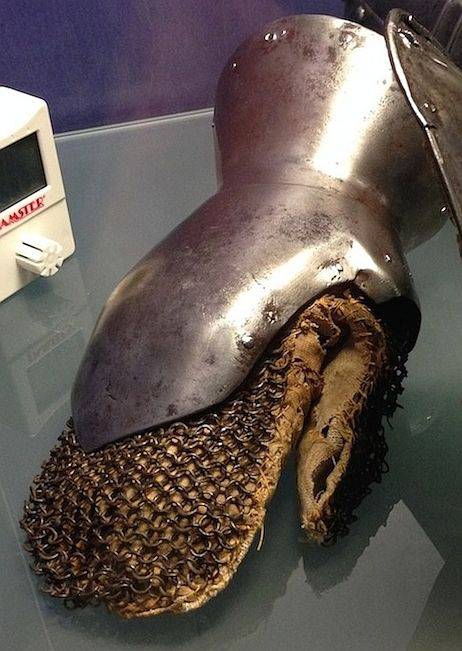 In the last years of the 15th century, Emperor Maximilian I (1493 - 1519), who eventually created armor with grooves on the surface, called "maximilian", perfected the development of knightly weapons. They were used in the next - XVI century, but never were knightly "uniform" because of its fabulous high cost. 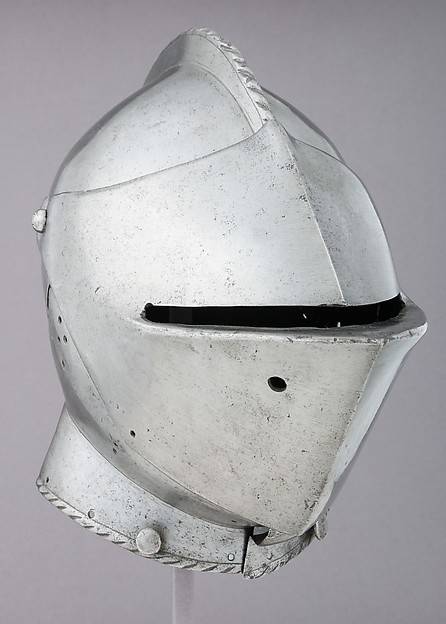 And although this armor is considered one of the most advanced, this perfection was paid for at too high a price because it was very non-technological, and therefore very expensive. 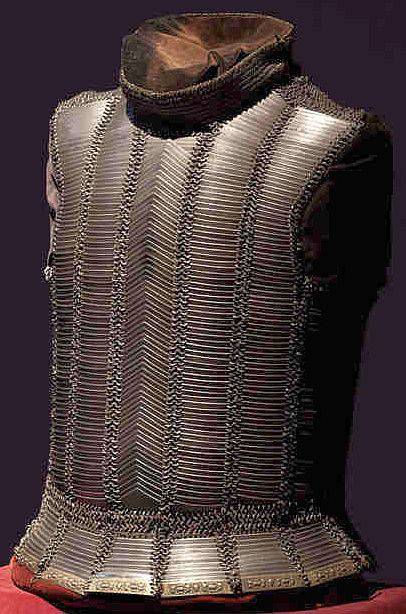 Interestingly, when in the 15th century a solid-forged armor made of large metal plates for horses appeared, it also turned out to be a direct development of the same brigandine, but only horse, similar to the armor of Turkish sipahs. For example, in 1445, the duke of Burgundy, Philip the Good, ordered a horse armor for himself, specifying: “to be made by type of brigandine”. But the progress of armaments went so fast in those years that already in 1450, master Pierre Innosenzo da Faerno from Milan produced quite perfect horse armor, consisting entirely of large solid metal plates that protected him from all sides except for his feet. This is one of the earliest armor of this type, which has come down to our days, and, judging by how it is made, the technology of its manufacture has been completely worked out by this time!