Crusaders against the Hussites

July 26 2016
50
“In the name of all Czechs I swear that the Czechs will terribly avenge the temples in the event of the death of Gus. All this lawlessness will be paid a hundredfold. The world before God and people is broken, and in the blood of the papists the Czech goose washes its wings. He who has ears, let him hear. ”
(Pan from Chlum - performance at the Cathedral of Constance)


It must be said that the attempt of the Roman popes to solve European problems by organizing crusades to the East not only did not solve part of the old problems, but also created new ones that also had to be solved somehow, and these problems were very, very serious. For example, immediately after the start of agitation for the first crusade in several parts of Europe, relations between Jews and Christians deteriorated significantly. If in Spain, Christians, fighting for Christ, began to kill Jews long before the Reconquista and the expulsion of Muslims began in 1063, then in Central Europe, where crusader troops gathered for the first crusade, the persecution of Jews began in the spring of 1096. They were held in Speyer, Worms, Trier and Metz, and then continued in Cologne, Neisse and Xanten. At the same time, not only the crusaders who attacked the Holy Land attacked the Jewish communities, but also the robber gangs of knights who had joined them, who did not gather so far, but went along with the "pilgrims". Thus, about eight hundred people were killed in Worms, and more than a thousand died in Mainz. According to the most careful calculations, the number of dead could be four to five thousand people. In Regensburg, the Crusaders forced the local Jews to be baptized, although, according to church regulations, it was strictly forbidden to do this. 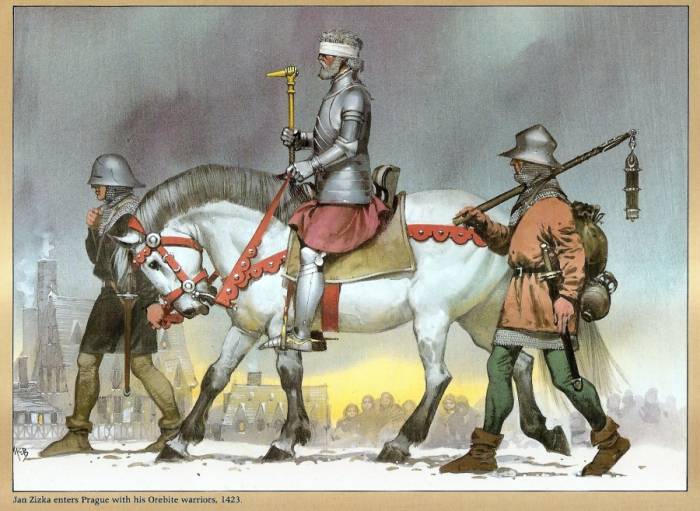 It is clear that there was a very deep abyss between Christians and Jews. However, the crusade against the infidels only aggravated this situation. Now it was worth, for example, in Holy Week someone shouting that the Jews were for the crucifixion of Christ, as Christians immediately rushed to beat the local Jews, because of which bloody clashes broke out in the cities. At the same time, some Christians and especially the Crusaders captured so much of all good that they didn’t go further, believing that God gave them everything they needed, they didn’t want to take part in the march, but tried to return to their homes as soon as possible with the stolen property. 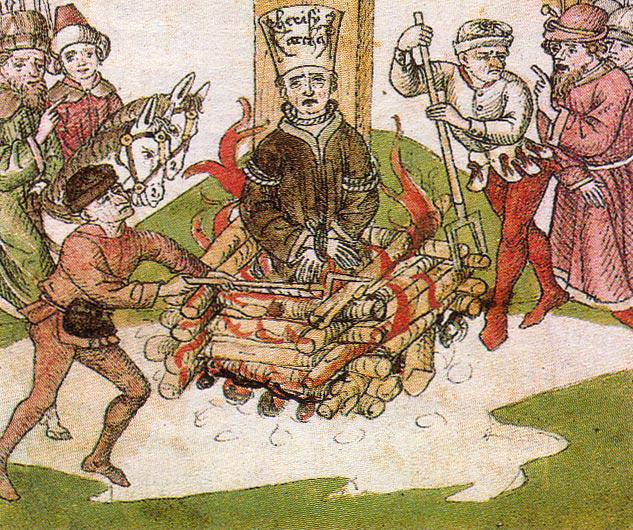 Another problem is the problem of finances, which was acute at all times. After all, such a large-scale thing as the organization of military expeditions to the East, required huge financial resources that needed to be obtained somewhere. So, already during the preparation of the first campaign, the participants were advised to take more money with them, since there would be no one to support them in the campaign. In the future, the Crusaders were asked to stock up money for two years. And many knights, going to the Holy Land, sold off all their belongings or borrowed money from usurers, hoping to never give them back! 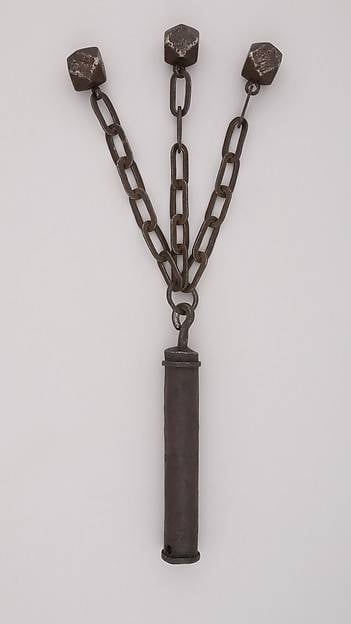 The kings, accordingly, raised taxes on their subjects (in particular, this is what King Henry II of England did), and even spiritual knightly and monastic orders were exempted from taxes imposed by the pope, and only Cistercians evaded paying them to 1200 of the year.

However, the popes also earned income due to the wide sale of indulgences, which made it possible to get any absolution from them. So, when the English king Henry II ordered the killing of the archbishop of Canterbury, Thomas Becket, a large fine was imposed on him, which the church received, and this money also went on another crusade. It was the lack of cash inflows from Aquitaine in the south of France that first of all caused the crusades against the Cathars, who, if they continued to pay church taxes in sufficient amounts, most likely could have avoided the “God's punishment” inflicted on them. 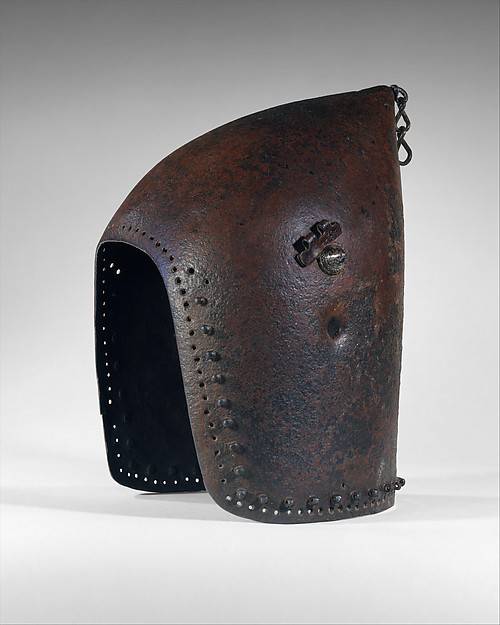 Moreover, the tax burden during the Crusades became so heavy that it gave rise to all sorts of jokes directed against the Pope. “Admit it openly,” Minnesinger Walter von der Vogelweide asked as early as 1213, who, speaking the language of modern times, had apparently simply “gotten” all these papal exactions to the crusades, which only his own life had for three. then are you sent by dad to bring him wealth, and cast us, the germans, into poverty and pledge? ” 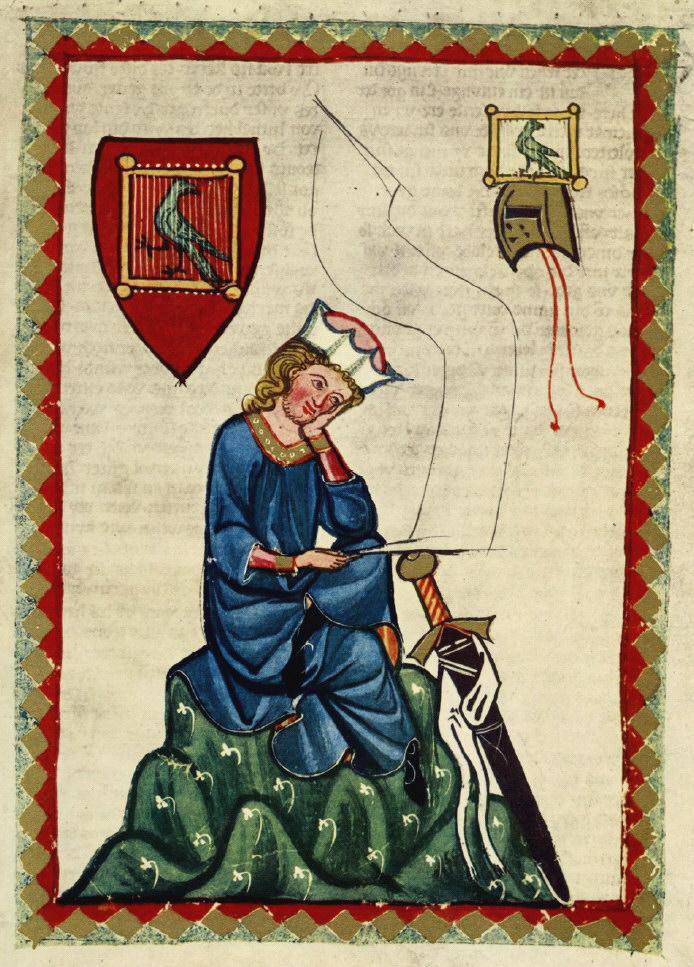 Such an attitude towards believers from the church naturally pushed away a mass of parishioners from it and led to the emergence of many very different heretical teachings. Neither the Avignon Capture of the Popes, which took place in 1307 - 1377, nor the Great Schism, or the split of the Catholic Church 1378 - 1417, added to the church of authority, when two and then three popes were at the head of the church !

Begin to degenerate and the crusading movement itself. At first, this degeneration manifested itself in the crusade of the French and Germanic 1212 children of the year, quite convinced by the words that adult crusaders are greedy and bad people, which is why God does not give them victory, and only they, immaculate children, will be able to arms to conquer Jerusalem. Then they were followed by two “crusades”, the so-called “shepherds” of 1251 and 1320, during which the poor of the Southern Netherlands and Northern France seemed to go on a crusade, and themselves began once again to attack the Jews and ruin everything in its path. As a result, Pope John XXII came out against the shepherds with a sermon, and the King of France, Philip V, sent troops against them, who cracked down on them, as with the most ordinary rebels. 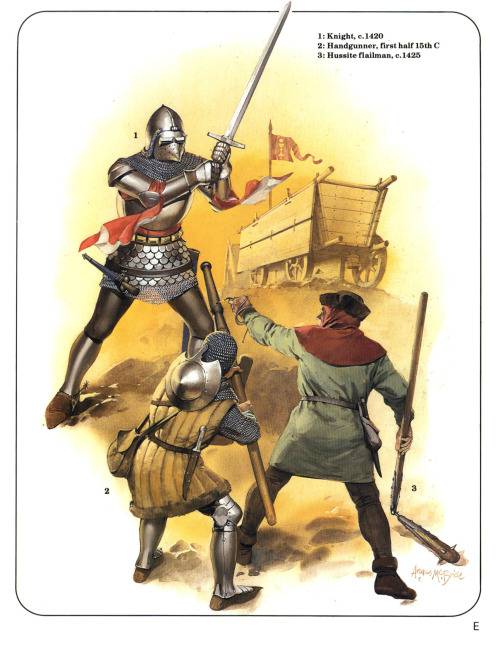 1420 Knight of the year fights against the Hussites. Fig. Angus McBride

Therefore, it is hardly surprising that, for example, in the same Czech Republic at that time, under the influence of the reformist ideas of Jan Hus, the departure from the traditional Catholic teachings also began, and the movement of the “Hussites” - that is, his followers, eventually turned into a real folk war for the independence of the Czech lands. The Pope, of course, could not afford to lose the Czech Republic, because the state was economically developed and brought a lot of money to the papal treasury, because he 1 March 1420 declared the Hussites heretics and called on to start a crusade against them. But the main organizer of the campaign was not the then Pope Martin V, he was his ideological inspirer, but the king of the Czech Republic, Hungary and Germany, as well as the future Holy Roman Emperor Sigismund, who also needed the Czech Republic. So he immediately began to assemble in Silesia the troops of the Crusaders from the German, Hungarian and Polish knights, from the infantry, which the Silesian cities had set for him, and also from the Italian mercenaries. 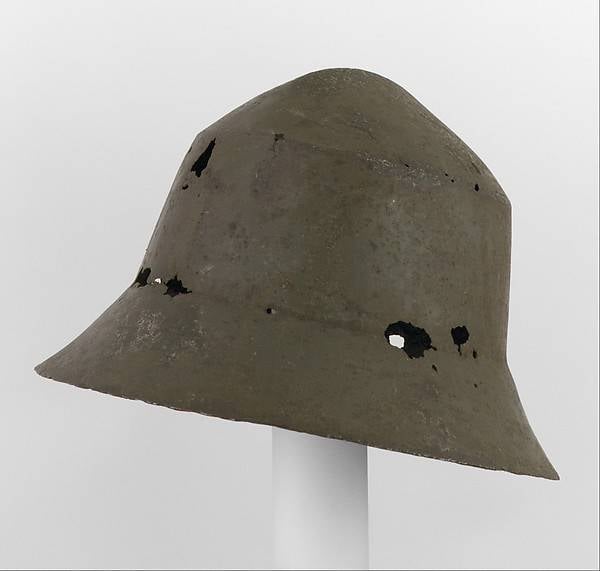 However, the first clashes between the crusaders and the army of the Hussites showed that the time of the knight’s own army, the main striking force of which was the heavily armed knightly cavalry, had already passed. The first campaign was followed by four more, organized respectively in 1421, 1425, 1427, 1431, but never brought much success to the crusaders. In turn, the Hussites took several trips to the lands of neighboring states and even besieged Vienna, although they failed to take it. 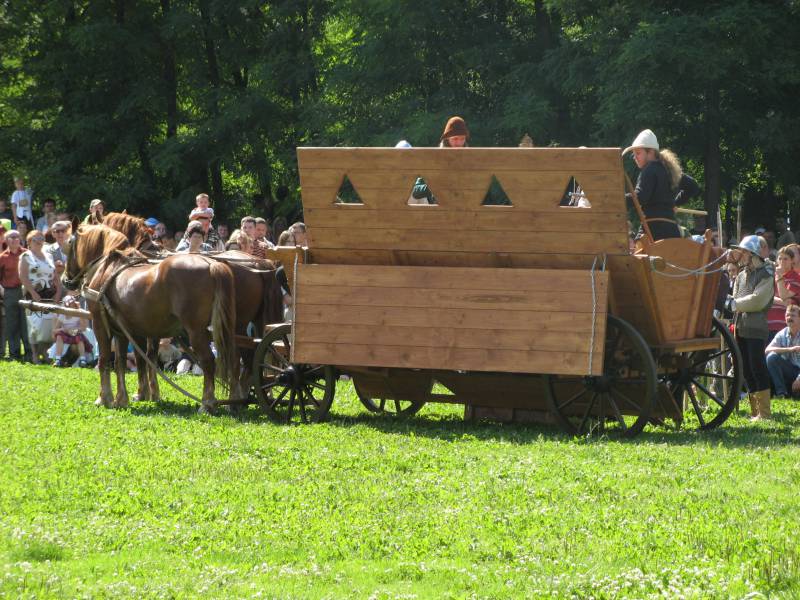 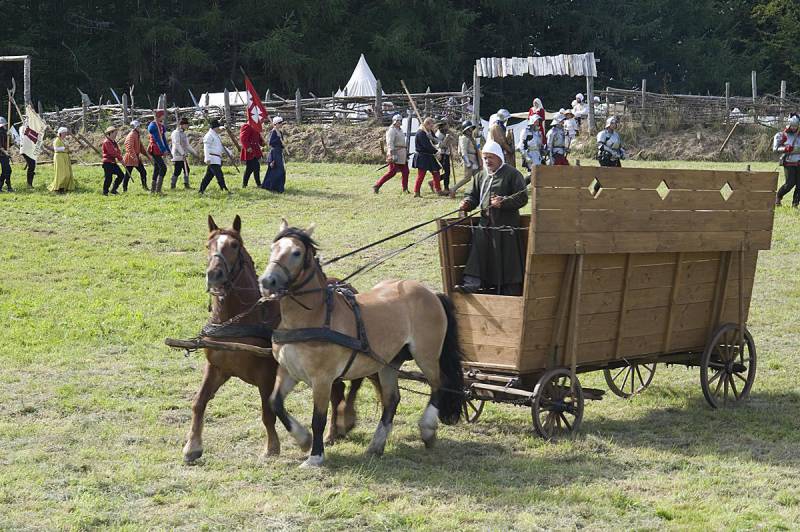 Fighting cart on the go. 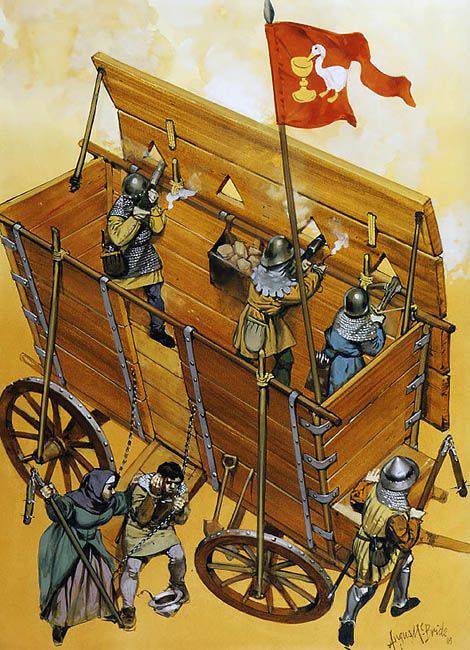 The Hussites skillfully defended themselves from attacks of knightly cavalry, building mobile field fortifications from special combat vehicles, shot riders from crossbows and the first samples of handguns that received the name “Pishtala” in the Czech Republic, and used threshing arms directly in the melee, which, being sharp, stuck nails, turned, thus, into a combat morganstern. 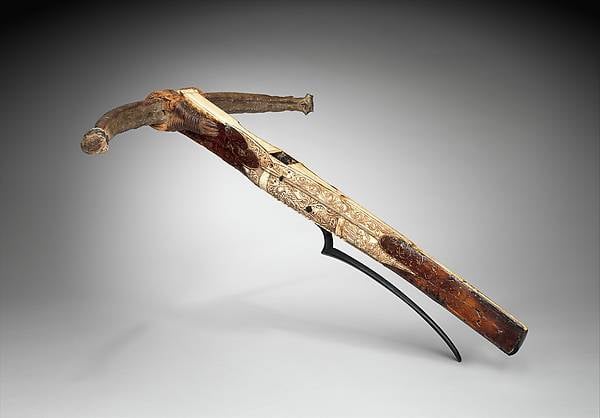 The talented organizer of the Hussite army was a poor knight and an experienced warrior Jan ижižka. Being wounded in the head, he went blind, but continued to command his troops, and did so so professionally that he did not suffer a single defeat in the battles with the Crusaders. Especially skillfully, Jan Zizka used mobile fortifications, which were assembled from ordinary peasant carts with which his army enclosed against their cavalry. True, the Hussites have altered them a bit: they supplied them with thick walls of boards with loopholes and chains to firmly connect them. On each cart there was a kind of “calculation”: a thresher with a flail, a halberd with a halberd and a hook, crossbowmen and arrows from a simple firearm. These mobile fortresses have never been crushed. In addition, it was the Hussites who first began to install small cannons on wagons and shoot them at knights when they tried to attack their fortifications. As a result, it came to the point that the knights happened to begin to retreat, they barely heard the battle songs of the Hussites and the creak of their carts! 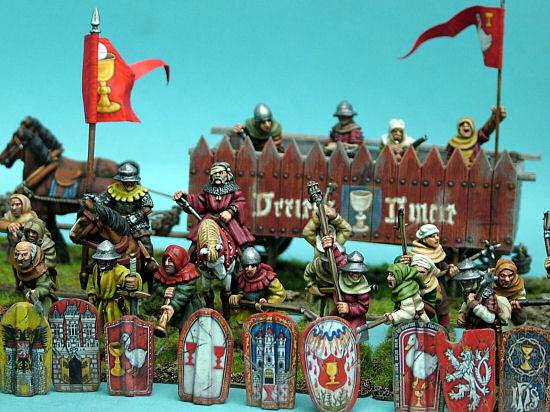 The results of the crusaders' campaigns against the Hussites turned out to be so deplorable that the Pope and King Sigismund were forced to use the Czechs themselves in the fight against them, only from a more moderate wing. As was usually done and done in such cases, they were attracted by promises, as a result of which a fierce internecine struggle began on the territory of the Czech Republic, which ultimately led to the defeat of the Hussite movement. 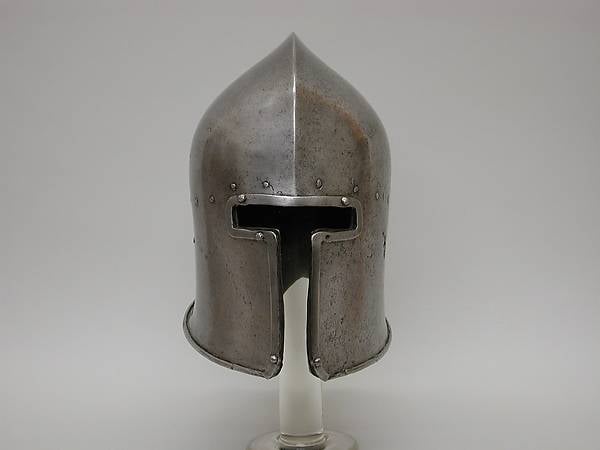 Nevertheless, the Catholic Church in the Czech Republic was not able to reclaim all the lost land and restore the monasteries destroyed by the Hussites, and therefore to regain its former influence. As a result, the outcome of the war was influenced by the compromise of the moderate part of the Hussites with the empire and the Catholic Church. This brought her to an end, and she, in fact, did not bring any great benefits to any of the parties involved, but thoroughly devastated Central Europe and showed the ability to successfully smash knights with peasant infantry forces armed with spiked chains and firearms. 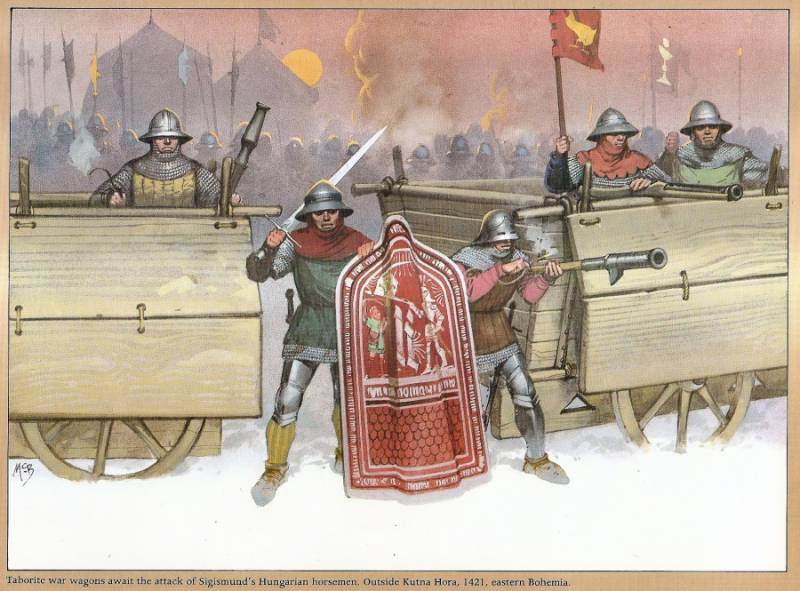 Another illustration of Angus McBride with the image of the Hussites.

Interestingly, the legendary ... Jeanne d'Arc, who marched 23 in March 1430, dictated a letter in which she called on the crusading army to oppose the Hussites and fight with them until they returned to the Catholic faith. Two months later, it was captured by the Burgundians and the British, and then, you see, she would have gone to war in the Czech Republic and would have joined the ranks of the local crusaders!