Tu-22M3 worked on the militants in Syria

July 12 2016
251
It became known that the Russian Ministry of Defense actually planned the operation "Retaliation" against terrorists in Syria after the news of the attack on a helicopter with a Russian crew. The press service of the main defense department reports that six bombers of the Far aviation (Tu-22M3) took off from airfields in Russia and, having flown to Syria, attacked ISIS fighters. 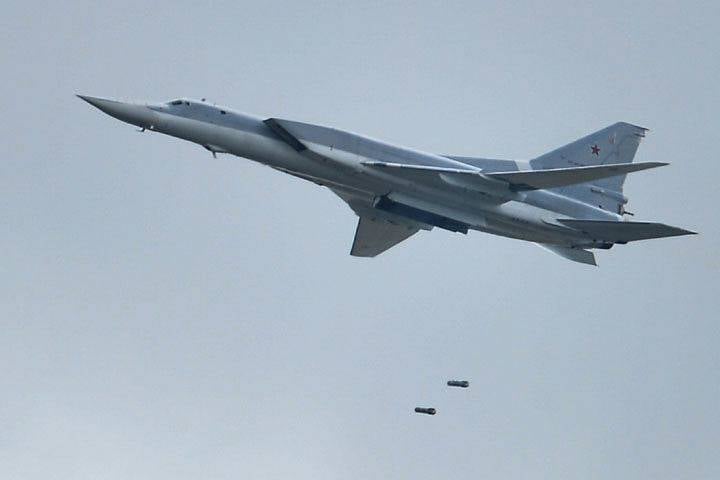 Ministry of Defense of the Russian Federation:
On the morning of July 12, six Tu-22М3 long-range bombers, which took off from home airfields in the Russian Federation, delivered a concentrated blow of high-explosive fragmentation ammunition at the facilities of the IG terrorist group in the region east of Palmyra, Es-Suhn and Arak.

The report says that during the operation a large camp of ISIL militants was destroyed, as well as other terrorist facilities in the UAR. Summary MO RF (leads RIA News):
The blow destroyed a large field camp of militants, three ammunition and weapons depots, three tank, four infantry fighting vehicles, eight vehicles equipped with heavy machine guns, as well as a large number of enemy manpower

In the Defense Ministry noted that the "partners" were warned that the Russian long-range bombers will work in Syria for the purposes. The report says that after the antiterrorist mission, all Russian aircraft returned to Russia to home bases.

Press service of the Ministry of Defense of the Russian Federation:
All airplanes returned safely and landed at their airfields. To ensure safety of flights, representatives of the international coalition were notified in advance about the time of strikes and flight corridors.
Ctrl Enter
Noticed oshЫbku Highlight text and press. Ctrl + Enter
We are
The action “Military service under the contract is your choice!” In Rostov-on-Don: future contract servicemen, exhibitions and “Russian Knights”Reports from the militia of New Russia for 29 August 2014 of the year
Military Reviewin Yandex News
Military Reviewin Google News
251 comment
Ad