July 16 2016
10
As many researchers note, the speed of the conquest of Central Asia was ahead of the wildest hopes. Russian military leaders hardly used the absolute power of local power and often conducted various trips on their own initiative. Having attached this or that territory, they simply put officials in St. Petersburg in front of a fait accompli. True, it is possible that such a tactic was sanctioned or, at least, approved with approval by the king. 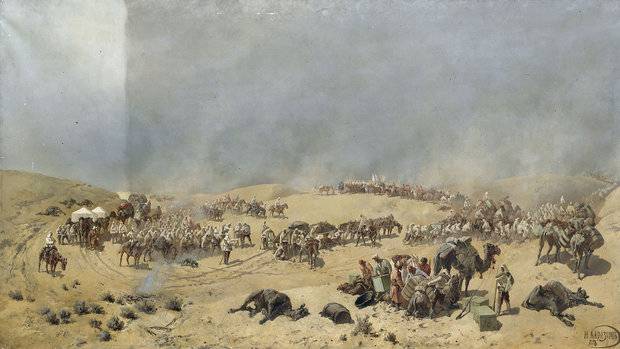 In the case of major foreign policy complications, it was always possible to declare that the generals simply exceeded their authority, and Petersburg did not even think of violating international agreements. Our diplomacy indicated that nomads rob caravans, arrange raids on Russian lands and lead captives into slavery. The need to restore order in troubled regions simply leaves us with no choice, and we have to send troops to Asia.

All these arguments did not convince London too much. Fear of losing India was overshadowed by any arguments. Of course, in the English elite there were those who recognized the validity of the Russian position, but their voice sank in the cries of "hawks."

The anti-Russian party in the leadership of Britain took as a challenge the treaty of St. Petersburg with Bukhara, concluded in 1868 year. The text spoke of equality of the parties, but the Khanate clearly became a vassal. The British rushed to incite the peoples of Central Asia to create an anti-Russian coalition. In this they did not succeed, and in the end both great powers sat down at the negotiating table.

The two empires expanded, with their armies moving towards each other. A little more, and we should have a common border with the British. New war was not wanted either in London or in Petersburg, and Gorchakov had an idea to make Afghanistan a buffer zone. British diplomats agreed with this, but the concept of “Afghanistan” was interpreted in a very peculiar way. They suggested including the Khiva, Kokand and Bukhara khanates in the buffer zone.

Russia was not satisfied with such a turn, the negotiations stalled, and in 1869, they stopped altogether. The only result of diplomatic discussions was mutual agreement to fix the exact boundaries, but when this was done, it was not specified.

It was not possible to relieve tension in relations with Britain. A new war with England could become a reality, and, as we recall, as a result of the Crimean War, Russia pledged not to hold a full Black Sea fleet. And so in 1870, Alexander II decided that it was time to annul the Paris Treaty. Gorchakov openly proclaimed that Russia was no longer going to limit the number of warships on the Black Sea.

At about the same time, the king decided to strike at the Khiva khanate. As the full-scale hostilities were to come, military preparations did not escape the keen eyes of the English agents. Inquiries about Russia's intentions flew from London to Petersburg. In turn, our diplomats sought to put down the vigilance of their British colleagues, in every way they denied and got away with vague answers.

The issue of clarifying the Afghan border also remained on the agenda. Both sides traded desperately and only in 1873 were they able to reach a compromise. The British made it clear that they would not provide military assistance to the Khiva khanate, and the Russians agreed to recognize the sovereignty of Afghanistan over the disputed territory of Badakhshan and Vakhan.

History Khiva’s independence came to an end, and its ruler, Khan Mukhamed-Rakhim, didn’t blow. He was not afraid of Russia, because he considered the desert impassable for the Russian army. The Governor-General of Turkestan Kaufman sent a letter to Muhamed-Rahim in which he announced that he intended to end the robberies on Russian caravans. To do this, we prepared a hike for the Syr Darya River, where the huts nested.

Khan arrogantly refused to enter into correspondence with the Governor-General and ordered to prepare a response to his subordinates. In their letter, the Khivans stated that Russia was violating the border treaty. They say that the territory where the robbers take refuge is subject to the khan. Kaufman made inquiries, and found out that there were no agreements on this subject.

It would seem that the successes of the Russians against Bukhara and Kokand should have sobered up Muhammad-Rakhim, but he proceeded from his own original look at geopolitics: the eternal opponents of Khiva - Bukhara and Kokand weakened, and Russia - far.

The Khiva elite believed that the Russian army would go to them from the east, through impassable sands, and, empty-handed, would return back. In 1839, this is exactly what happened: the Russian detachment, which had left Orenburg, did not reach its goal, and after a heavy march, returned.

However, in Petersburg they took into account the sad experience and already knew how dangerous such a route was. Therefore, in 1869, the Russians landed troops on the east coast of the Caspian Sea and built a fortification of Krasnovodsk (now Turkmenbashi) there. Thanks to this port, Russia was able to quickly deploy troops from the Caucasus to the opposite shore of the Caspian Sea.

When information about the Russian landing force on the Caspian reached Khiva, the khan began to act. Khivans collapsed and poisoned the wells on the path of the possible movement of our squad. The fortifications were erected, the local population was provided with tax breaks to pull them over to their side, and moreover, the Amu-Darya Taldyk channel was shrouded in order to complicate shipping.

It was not only Khiva that was redefined, but also London, and even Calcutta, the capital of British India. The English, as experienced chess players, immediately imagined a multi-pass combination: the Russians built Krasnovodsk, which means they would soon take Khiva, and then hand in hand to Afghan Herat, that is, the key to India.

Russia's commitment to respect the sovereignty of Afghanistan temporarily pacified London, and the British strategists sacrificed Khiva as a pawn. But the Khan, who was frightened in the 1869 year, was again encouraged: the Russians, it turns out, landed a small detachment in Krasnovodsk, and not a huge army at all; as time goes on, Russia does not attack Khiva, which means that the Khanate is invulnerable. So thought in Khiva and very wrong.

Kaufman wrote another letter to the khan, where he offered the world on the following terms: Khiva liberates the captured Russian subjects, gives our merchants the same rights that Khiva people enjoy in Russia and ceases to patronize anti-Russian rebels. After a while, an arrogant reply came: “Our sovereign wishes that: the White Tsar, following the example of his ancestors, not be fond of the vastness of his empire” (MA Terentyev, Khiva campaigns of the Russian army. - M: Veche, 2010. C. 164 ).

This is how the Khan missed the last chance to avoid war with the Russian Empire. Petersburg was fed up with endless altercations, and Kaufman was ordered to take on weapon. The Governor-General thoroughly approached the march. They carried out reconnaissance of the area, made clear instructions for the detachment commanders, bought camels and all the necessary supplies.

Interestingly, the attack on the Khiva khanate was carried out immediately from several sides, and the column of Nikolai Alexandrovich Verevkin was ahead of the rest. By the way, Verevkin was one of those who in the battle of the Black River during the Crimean War behaved so bravely that he received a Golden Sword as a reward.

28 May 1873, parts of Verevkin came to Khiva. The garrison met the Russian cannonade of guns. Our commander was seriously wounded in the face, and the leadership of the attack passed to the Chief of Staff Colonel Saranchev. The first onslaught of the Russians of Khiva was repulsed, but soon they agreed to negotiations. Afterwards, historians wondered what it was? Storm or reconnaissance battle?

Meanwhile, a detachment of Kaufman himself was approaching the gathering place of all the Russian columns. When he was standing in 20 km from Khiva, Khan Inak-Irtazali’s cousin arrived there, who brought a message about the surrender of Khiva.

It turns out that Khan had already been overthrown, in the city a new power, and on the walls stands Mikhail Dmitrievich Skobelev, who is clearly preparing to take Khiva. Kaufman urgently sent him a note: "Stand still and do not climb ahead." In turn, Skobelev asked the command of the missile, so to speak, just in case.

When a platoon of rocket launchers arrived, Skobelev entered the city, ignoring the order. And then Verevkin himself opened up the fighting, which really surprised Kaufman! A real comedy was played out: the assault on Khiva, which no one defends. In pre-revolutionary historiography, what happened was called the "operetta".

29 May 1873, it was all over, Khiva officially surrendered, and Kaufman conducted an investigation into the strange behavior of his subordinates. It was not possible to find out who initiated the “operetta”, but Skobelev, who is known for his thirst for rewards and glorious victories, was suspected.

The result of the Khiva campaign 1873 of the year was the agreement under which the Khanate was turned into a Russian protectorate. The administration of the city included representatives of Russia. The slavery that prevailed in Khiva was abolished, the ousted Khan was restored to the throne, but his power was limited.