Police at a protest in the United States shot snipers

July 8 2016
224
In many US cities, including major ones (New York, Chicago, Dallas), protests were held due to the killing of two blacks by the guards. In the city of Baton Rouge, Louisiana, the other day, two policemen threw a black man face on the asphalt, and then shot him dead. A day later, a black man who was driving a car was injured by a policeman in Minnesota, in Falcon Heights. The wounded man died in the hospital.

The first fatal incident occurred in the city of Baton Rouge (Louisiana) on Tuesday night. There are videos of the incident; they have already gone online. On the frames you can see how two policemen bring down a dark-skinned man on the ground, and then one guard of order in the focus fire shoots the fallen.

"On Tuesday morning, the police were called to the store" Triple S Food Mart ": a complaint was received that a black man in a red T-shirt was threatening someone weaponsWrites Newsru.com. “37-year-old Elton Sterling used to sell CDs at the store. The police found him in the parking lot. Sterling was ordered to lie down, but without waiting for it, they hit the hood of the car and threw it to the ground. Then one of the policemen pressed him to the floor and began to search him, while the other turned on his weapon. The shots rang out when the partner shouted "He has a barrel!"

According to the police, they both feared that the suspect would use a firearm. However, the video, filmed by those present, indicates: this would be difficult. After all, the detainee was pinned to the floor.

Record of the second incident also hit the Internet, notes RBC. She made and posted to the network girlfriend of the deceased. She said that the police stopped the car and demanded that the driver show the documents. As soon as the driver reached into his pocket for rights, the policeman opened fire.

Later, a friend arranged on the Internet "video broadcast" of the tragedy. The whole world could see her bleeding African-American buddy die. "He was stopped because of the broken headlights, - write "Vesti". “When the policeman approached the car, Castile decided for some reason to warn him about the presence of a pistol in the car and that he had permission to carry a weapon. I even wanted to show this permission, I reached for the papers, but then there were shots. ”

“I am here to say: our police do not protect us. They kill us because we are black. I do not feel safe, ”said the girl of the deceased Castile.

According to data released by the Washington Post, during the last six months, the police shot and killed 491 people (for comparison: 2015 people died at the hands of policemen during the same period of 465). Less than 10% of those killed did not carry weapons, and 25% were mentally ill.

The murder of Mr. Castile triggered protests at Falcon Heights. After the murder, hundreds of people gathered at the governor’s residence all day demanded from the authorities a “fair investigation” and “freedom for black people”.

Residents of the city of Baton Rouge, where Mr. Sterling was killed, also demand justice and justice from the authorities.

In protest, the demonstrators gathered at the scene of the incident and chanted: “There is no justice, there is no peace!” The protesters demanded to punish those responsible. “We will pray for peace, we will pray for unity. I want you to know that the protests will not stop here ... We want justice, and we want clarity in everything. Personally, I will not stop until it becomes clear what exactly happened, and the person responsible for all this will not be punished, ”the channel quotes. "Euronews" Democrat Denis Marcel from the Louisiana State House of Representatives.

There have been bloody protests. They happened in Dallas.

How early in the morning passed RIA News" with reference to the local police department, four policemen were killed during protests in Dallas. More 11 injured.

Unknowns opened fire on law enforcement officers in the Delay Plaza. There are reports that three of the affected police are in critical condition. Police chief David Brown told the press that two snipers were firing. The law enforcement officers managed to "drive into a corner" of one of the suspects. The chief also said that the suspects threatened to detonate a bomb in the center of Dallas.

There is a snapshot of one of the suspects. “Help me find it!” - calls the local police in his "Twitter". The police claim that this man had a rifle with him. 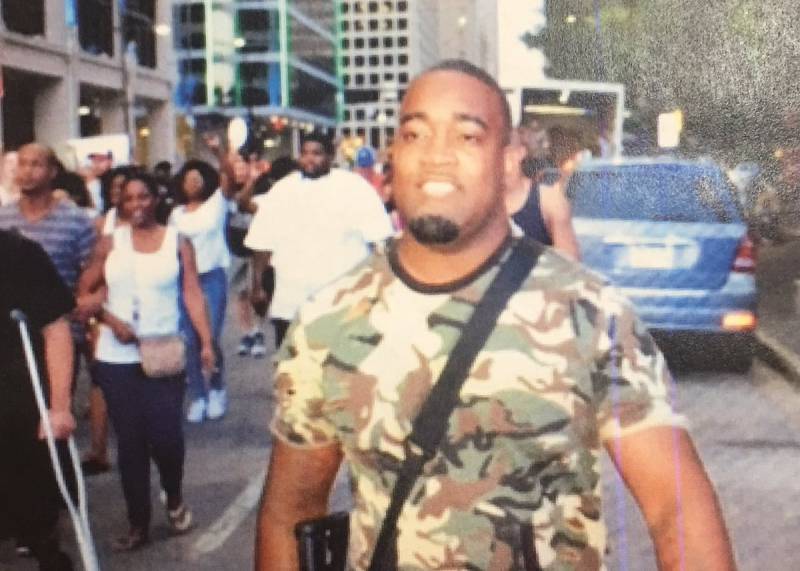 About snipers in Dallas writes and "Life".

According to the publication, the fire on law enforcement officers, providing security at a rally against police brutality, led several snipers. They were located on the roofs of nearby buildings. There were at least two shooters.

In recent years, the number of incidents involving the killing of blacks by the police has been steadily increasing in the United States. Earlier, high-profile incidents involving the use of weapons by cops against African Americans occurred in Ferguson, Baltimore, and in the New York district of Staten Island. In the United States more than once passed mass protests, growing into major unrest. To help the police was the National Guard.