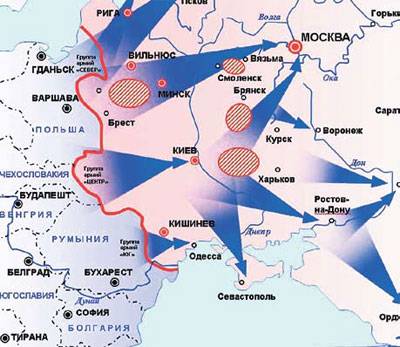 It is difficult to understand some authors who sometimes have regalia and degrees when they state their position at the level of stamps and templates, or even simply lies about the times of 60 – 80-х.

The question of the catastrophic start of the war apparently worried Stalin all the time. Therefore, immediately after it ended, the General Headquarters was tasked to find out why it happened. The Military Scientific Directorate (Colonel-General A. P. Pokrovsky, Head) of the General Staff of the USSR Armed Forces summed up the experience of concentrating and deploying troops of the western border military districts according to the plan for covering the state border of 1941. To this end, five questions were posed to the generals, commanders of units and formations of the initial period of the war, stationed on the western border of the USSR.

1. Was the defense plan of the state border communicated to the troops in the unit concerned, when and what was done by the command and staffs to ensure the implementation of this plan?

2. Since when and on what basis did the covering troops begin to enter the state border and how many of them were deployed before the outbreak of hostilities?

3. When was the order to bring the troops on alert in connection with the expected attack by fascist Germany on the morning of 22 June, what were the instructions on how to execute this order and what was done by the troops?

4. Why was most artillery located in training centers?

5. To what extent were the headquarters ready for command and control, and to what extent did this affect the course of operations during the first days of the war?

Answers to these questions were received and summarized.

In 1989, the “Militaryhistorical magazine ”in Nos. 3–5 printed the answers to the first two questions. But further, without any explanation, the publication was interrupted. Why? Presumably, the answers of the generals and officers were contrary to the point of view that Stalin de forbade, did not believe intelligence, etc. I will briefly give some of the answers that became known. Let's say on the second question.

From the wording itself it is clear that the covering troops were to be moved from their positions to the defense lines by an order given in advance. It is known from the memoirs of Marshal Baghramyan that the “order” arrived in the western districts 14 – 15 of June, when, under the guise of exercises, they began to enter part of the cover on the state border.

Colonel-General P. P. Poluboyarov (former chief of the armored forces of the PribOVO): “On June 16, at 23:12, the command of the 23th mechanized corps received a directive to put the formation on alert. The corps commander, Major General N.M. Shestopalov, was informed of this at 17:202 on June 18 upon his arrival from the 19nd motorized division, where he was checking mobilization readiness. On June 20, the corps commander raised the formations and units on a combat alert and ordered them to be withdrawn to the planned areas. This was done during June 16 and 3. On June XNUMX, by order of the district headquarters, the XNUMXrd Mechanized Corps (commander - Major General tank troops A. V. Kurkin), which in the same time was concentrated in the specified area.

Lieutenant-General P.P. Sobennikov (former commander of the 8 Army): “On the morning of June 18, 1941, I went to the frontier zone with the army chief of staff to check the progress of defensive works in the Šiauliai fortified area. Near Siauliai I was overtaken by a passenger car, which soon stopped. From it came Colonel General F. I. Kuznetsov (commander of the Baltic Special District). I also got out of the car and approached him. F. I. Kuznetsov called me aside and excitedly informed me that some German mechanized units were concentrating in Suwalki. He ordered me to immediately withdraw the units to the border, and by the morning of June 19 to place the army headquarters at the command post in 12 kilometers south-west of Šiauliai. The district commander decided to go to Taurage and bring the 11 th rifle corps of Major General MS Shumilov into combat readiness, and I was ordered to go to the right flank of the army. We sent the Chief of Staff of the Army Major General G. A. Larionov back to Jelgava. He received the task to bring the headquarters to the command post. By the end of the day, oral orders were given to concentrate troops at the border. On the morning of June 19, I personally checked the order execution. Parts of 10, 90 and 125 of the rifle divisions were occupied by trenches and wood-earth firing points, although many structures were not yet completely ready. ”

From the response of General Sobennikov clearly shows: Commander PribOVO, Colonel-General Kuznetsov, gives the command to bring the district troops to combat readiness 18 June. “At your own risk”, “on your own initiative”, “contrary to Stalin”? Isn't it funny?

Colonel-General M.S. Shumilov (former commander of the 11 Infantry Corps of the 8 Army): “Corps troops began to occupy the defense on the orders of the army commander from June 18. I gave the order only to the commander of the 125 th Infantry Division and corps units. Other units also received verbal orders through army liaison officers. This corps headquarters was notified. Ammunition was ordered not to issue. It was allowed only to improve the engineering equipment of the defense. However, 20 June, realizing the imminent danger, I ordered to give out ammunition and shells in the units and start mining some areas. 21 June was a member of the district military council (corps commissioner P. A. Dibrova) at the corps headquarters, who, through the chief of staff, ordered the ammunition to be taken away. I asked the army headquarters for a written order on this issue, but I received no answer. ”

Major General I.I. Fadeev (former commander of the 10 Infantry Division of the 8 Army): “On June 19, on June 1941, an order was received from Major General I. F. Nikolayev, commander of the Infantry Corps, to bring the division into combat readiness. All units were immediately withdrawn to the defense area, occupied by bunkers and artillery firing positions. With the dawn, the commanders of the regiments, battalions and companies in the terrain clarified combat missions according to a previously developed plan and brought them to the commanders of platoons and branches. In order to conceal the activities carried out at the border, normal defense works were carried out, and part of the personnel was disguised inside defensive structures, while on full alert. ”

Major General P. I. Abramidze (former commander of the 72 Mountain Division of the 26 Army): “On June 20 of 1941, I received this cipher of the General Staff:“ Take all units and units of your compound located on the border itself back a few kilometers, that is, at the line of prepared positions. Not to respond to any provocations by the German units, as long as they do not violate the state border. All parts of the division must be placed on alert. Execution to bring to the 24 watch 21 June 1941 of the year. " Just in time, I telegraphed to report on the implementation of the order. The commander of the 26 Army, Lieutenant-General F. Ya. Kostenko, who was entrusted with the verification of performance, was present at the report.

All memories with specific dates. And we are being treated with a “duck in Berlin”.

It is worth adding about the famous directive of the Chief of the General Staff from 18 of June on bringing the troops of the western districts into combat readiness. These memories are logically associated with this date. But historians have no directives themselves. Maybe destroyed or lies deep in the archive. But traces of it can be found. In particular, in the criminal case of General Pavlov and other leaders of Zapovo, namely in the minutes of the court session of the military tribunal, where the defendant Grigoriev A.T., the former head of communications of the district, was interrogated: “Member of the court comrade. Orlov. On l. e. 79 4 volume you gave the following testimony: “When leaving Minsk, the commander of the regiment of communications reported to me that the chemical armies department did not allow him to take combat gas masks from the NZ. Artodel of the district did not allow him to take ammunition from the NZ, and the regiment has only a sentry standard for 15 ammunition for a fighter, and the consignment and clothing department did not allow the field kitchens to be taken from the NZ. Thus, even in the afternoon of 18, the content departments of the headquarters were not oriented, that the war was close ... And after the telegram of the Chief of the General Staff from June 18, the district troops were not alerted. ”

It may be recalled that the Frontier troops were put on the alert and worthily met the enemy, although they had only light rifle weapon. Those 30 minutes that the Nazis took to the destruction of each outpost, turned into many hours of many-day battles with heavy losses. Why did the border guards find themselves in combat readiness, and the troops of the western districts plainly not, only partially? Yes, the border guards were from the department of Beria, and they tried not to emphasize this. But back to the combat readiness of the troops. Maybe the "MIC" will study the question with the answers of the front-line soldiers to the five questions of the General Staff and will complete the publication, which VIZH started in due time, but suddenly stopped?

Ctrl Enter
Noticed oshЫbku Highlight text and press. Ctrl + Enter
We are
Diplomats of the People's Commissariat of Defense: on the eve and during the warSoviet strategic planning on the eve of World War II. Part of 2. Wehrmacht defeat plan in the USSR
Military Reviewin Yandex News
Military Reviewin Google News
335 comments
Ad