NATO Summit as the starting point for a new cold war

July 8 2016
69
The NATO Summit to be held in Warsaw from July 8 to 9 will become historical event. And not only because it will be about "collective defense" from the famous "aggressor". The meeting of the heads of state and government representatives of the North Atlantic Alliance will be held for the first time in the homeland of the Warsaw Pact, which united the socialist states led by the Soviet Union in the era of the bipolar world and ceased to operate in July 1991. Some analysts believe that the summit poses a threat to Russia. 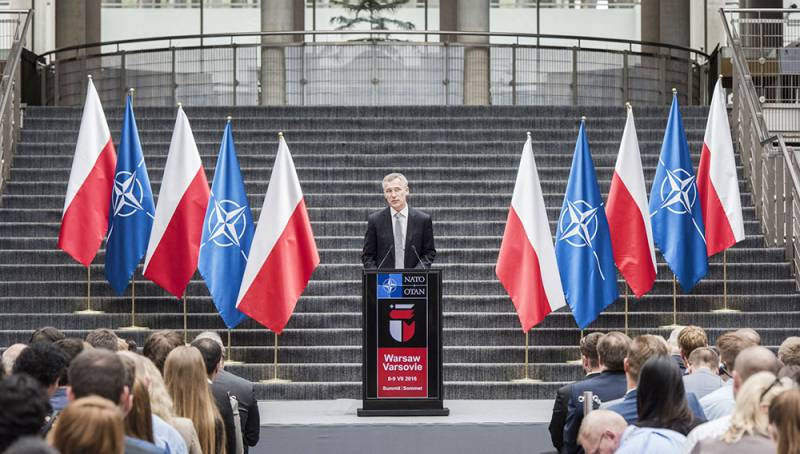 Especially at the upcoming summit will be the Ukrainian question. No wonder the Ukrainian press devotes whole articles to the summit. Correspondent.net, for example, notesthat Ukraine will be at the event the only country not in the alliance.

The meeting participants will devote a separate meeting to Ukraine "at the highest level," the newspaper notes. According to Ukrainian Foreign Minister Pavel Klimkin, Kiev is waiting for projects and decisions to fill trust funds for reforming the “security sector of Ukraine” from the Warsaw summit. True, the minister did not say what amounts are in question. It is only known that the projects, among other things, relate to the technical equipment and training of military personnel at the sites. He also said that some areas will be financed by NATO, and others - by individual NATO member states. “The final result of the summit should be a package of documents, a matrix of how to raise the entire defense sector of Ukraine to NATO standards. This should be a comprehensive assistance package, ”Mr. Klimkin explained.

As for Poroshenko, he intends to submit a strategic bulletin on the transition of the Ukrainian military industry to NATO standards.

And another interesting question is about the possible membership of Ukraine in NATO. For Ukraine’s accession to NATO, if a corresponding referendum were held in the country, 78% of Ukrainians would vote. Such data are provided by the Democratic Initiatives Foundation. In all macro-regions, excluding Donbass, the referendum “would have been won,” indicates the publication.

Poroshenko will hold talks with Barack Obama himself. Reports about it TASS.

The meeting will take place on the margins of the Warsaw Summit. The US President will participate in negotiations with the leaders of several European states and Poroshenko. This was announced by the deputy. Presidential National Security Adviser Ben Rhodes.

“One of the summit sessions will include a meeting of the NATO-Ukraine Commission. The President of the United States will meet with the President of Ukraine, Petro Poroshenko, in which the leaders of Great Britain, Germany, France and Italy will also take part, ”the Rhodes news agency quotes.

The purpose of the meeting, Mr. Rhodes called the opportunity to confirm support for "Ukraine, its territorial integrity and sovereignty."

Mr. Rhodes said nothing about money and any technical military assistance to Ukraine.

Obviously, we add that the representatives of Kiev go to the summit for money, not money, for promises. News that the NATO members are planning to accept Ukraine the alliance the other day, has not yet received. And the referendum here would not have helped Kiev. Countries with territorial problems, as you know, are not accepted into the alliance.

The money question, which only concerns Ukraine, and the entire alliance, more precisely, its members, was recently touched upon by US Secretary of Defense E. Carter. The topic of spending "on defense" of members of the alliance has long been concerned about it, since the United States spends much more money as a percentage of GDP and in absolute terms, too, than some European states in the "defense" bloc.

Therefore, Ashton Carter sees the discussion of the financial contributions of NATO members "to the common cause" as one of the main tasks of the Warsaw summit. At a meeting in Wales in 2014, the member states seemed to be conspiring to spend more money - to bring everyone's “contributions” to 2% of GDP. However, the US Secretary of Defense perfectly sees that the result of the “refinement” is far from ideal and notes with sadness that “there is still much to be done” in the area of ​​increasing defense spending.

According to Yevgeny Minchenko, Director General of the International Institute of Political Expertise, the desire to get more money for the "maintenance" of the alliance is behind the words of Secretary General Jens Stoltenberg. The other day, he said that NATO does not want a confrontation with Moscow, but sees Russia as an immediate threat. “From the point of view of the factual Stoltenberg is certainly not right, but he is right from the point of view of ideological, pragmatic,” leads Minchenko’s opinion. "Moscow Komsomol". - Such statements, as a rule, set the task of obtaining additional NATO funding by the countries where the alliance forces will be deployed. The fact that the Secretary General is telling a lie, in my opinion, is obvious, but he does it for a completely understandable purpose. It’s like in the story with Sweden: as soon as the country needs to approve the military budget, they immediately begin to look for a Russian submarine. ”

True, as some analysts admit, after the referendum on Britain’s withdrawal from the EU of “Western partners”, other problems should take up, rather than the Russian “threat”. “After the referendum on the withdrawal of Great Britain, all standard NATO statements on the“ Russian threat ”completely lose their meaning,” said Igor Nikolaichuk, head of the regional security sector at RISS, to Moskovsky Komsomolets. - The European Union is down. This is not the geopolitical and, most importantly, the number one geo-economic rival for the United States. From the point of view of regional security, geopolitics, we now live in a new reality. And I would not be surprised if one of the main issues at the summit of the alliance was the question of how soon Germany will withdraw from NATO. Already there was a statement by German Foreign Minister Frank Walter Steinmeier about the futility of “sabering weapons"Alliance, shortly before the NATO summit, and this says a lot."

However, the "threat" of some European politicians takes, and very much so.

On the eve of the meeting in Warsaw, the Minister of Defense of Poland, Anthony Maciesewicz, said that decisions would be taken at this summit aimed at strengthening the containment system of Russia.

“We can forget about fear, even though Russia is taking steps that threaten a regional and wider world,” he cites. "Mirror of the week". “A restraining force will be built at the summit that will force Russia to forget about the threats against Poland and other countries.”

Such statements about “forgetting fear” are based on Warsaw's confidence that one serious question will be resolved at the summit: the deployment of NATO on the so-called eastern flank, that is, in Poland and the Baltic countries, four battalions of total 4000 people (on rotational basis). The battalions must be commanded by people from the United States, Canada, Germany, and the United Kingdom. Earlier it was reported that a separate American brigade will be located near the border of Poland with the Kaliningrad region.

The REGNUM news agency observer Stanislav Stremidlovsky, commenting for "Free Press" Statements made on the eve of the summit said: “The decision of NATO member countries to deploy four battalions in Poland and the Baltic states is not at all what Warsaw dreamed of. Poland needed permanent bases. But now the country's leadership and the speakers of the ruling party have to explain to the public why they have not really lost. Hence the bravura claims that one battalion of Americans — namely, the United States will allocate an additional contingent for Poland — will suffice to repel “Russian aggression”. Moscow’s response to this remains calm. Russian authorities have repeatedly stated that no one plans to attack Poland. I think that after the summit in Warsaw and in Poland they will behave more calmly. ”

Intensifying tension before the NATO summit does not at all appeal to Western society.

As the influential German newspaper recently reported "Frankfurter Allgemeine"The 64 percentages from the 2054 respondents support the position of Minister Steinmeier, who does not want the situation to escalate. Total 16 percent of respondents opposed the peace-loving minister. True, however, 49% of respondents consider the military actions of Russia (“like those that were two years ago in the Ukrainian Crimea”) against the Baltic countries are quite possible. 30% of respondents do not believe in such a scenario.

He does not want to "whip up" and complicate relations with the Russian Federation and Italy.

Roberta Pinotti, the Italian defense minister, said recently in an interview with Corriere della Sera that the summit in Poland will give green light to the deployment of military units in Eastern Europe, and this will be a real signal "to calm our allies." “But Italy insists that the agreements between Russia and NATO should not lose their force and the dialogue should continue,” Pinotti quotes. "Inopressa".

However, the tone for the summit seems to be set by the United States and Poland. And, perhaps, to some extent Ukraine, not participating in NATO. In the end, it is the “Ukrainian Crimea”, and also the South-East, that are the starting point for NATO (more precisely, American) strategists and talking heads in Europe, such as the notorious Russophobe Matzerevich, whom they say are not tolerated by compatriots. Americans want to force Europe to arm at the expense of Europe - and they are likely to achieve this. The thesis about the “Russian threat” has already been taken for the agenda, this was often spoken about through the mouths of NATO bosses.

As a result, the planet will be on the verge of the “officially declared” new Cold War, where Russia is the attacking enemy, and NATO is something of a defensive victim.

In this sense, holding a summit in Warsaw looks symbolic. I remember the era of the Warsaw Pact and the commonwealth of socialist countries. Only now European socialist countries are no longer there, and the USSR is not, and only Russia is among the strategic opponents of the present united Europe. It is a capitalist, with the bourgeoisie and the oligarchs.

Against the backdrop of the bloody actions of the “IG” terrorist cells in Europe, the aforementioned Europe, at the behest of the United States, has to consider and call Russia the aggressor. Russia, which has not attacked any of the NATO countries and effectively destroyed the militants of “IS” in Syria, is listed as an opponent of the West.

Absurd? Not. For the US military requires money. Much money. And for knocking out "a lot of money" of some kind of "IG" is not enough. Against the few terrorists from the "IG", intimidating Europe, there are police and special services. Russia is the enemy of big, with a big army. This is a very convenient enemy for stuffing the bastard with the big money from the state military-industrial complex. Therefore, against Russia, and calls for arming "exceptional hegemon."

Recall that the NATO summit will take place from 8 to 9 July. Eighteen presidents, twenty-one prime ministers, forty-one foreign ministers and thirty-nine ministers of defense will participate. In total, 65 delegations from the 28 alliance states and 26 partner states will arrive at the event in Warsaw. Representatives from the EU, the UN and the World Bank will also arrive at the meeting (without bankers anywhere). In short, the list is impressive. The summit, no doubt, will be historic and will give a new impetus to the Cold War. Militant Pan Matserevich there is something to tell reporters.

Observed and commented on Oleg Chuvakin
- especially for topwar.ru
Ctrl Enter
Noticed oshЫbku Highlight text and press. Ctrl + Enter
We are
Results of the week. "And let's weigh on brotherhood"Situational analysis of the death of the MH17 flight (Malaysian Boeing 777), made on the basis of engineering analysis from 15.08.2014
Military Reviewin Yandex News
Military Reviewin Google News
69 comments
Information
Dear reader, to leave comments on the publication, you must sign in.