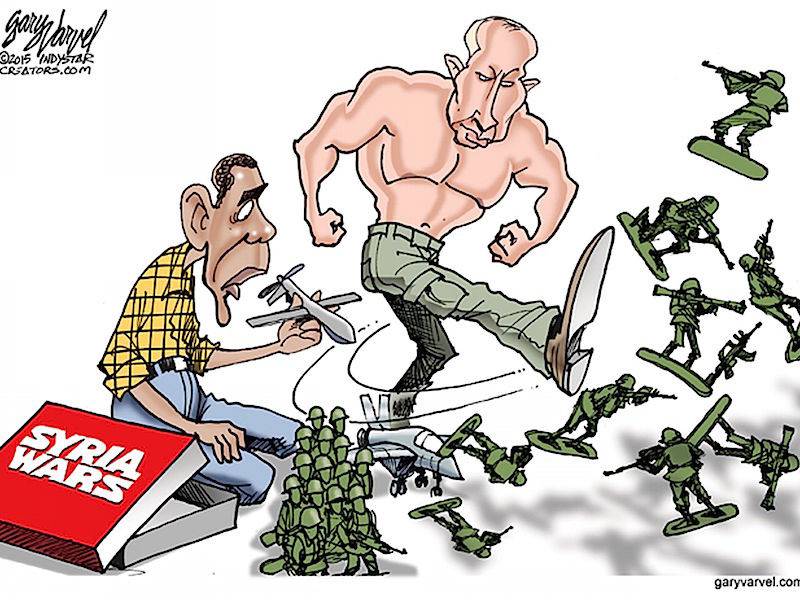 The Syrian policy of the Obama administration for several years does not bring any results. Secretary of State John F. Kerry is negotiating and concluding agreements with Russia to end the bloodshed and create a new government in Damascus, at the same time warning that if Russian President Vladimir Putin or Syrian President Bashar al-Assad will not comply the terms of these agreements, the US will consider other options, such as, for example, strengthening support for the Syrian rebels. In any case, the Russian and Syrian regimes violated their promises, continuing to bomb civilians and use chemical weapons. weapon and refuse humanitarian assistance to civilians. And this is not surprising: every time they did, the United States again turned to Russia, offering it new concessions and persuading them to conclude another agreement.

And it happens again. Senior US officials publicly confirmed that Syria and Russia had grossly violated the cessation of hostilities regime, which was established in February with the assistance of Mr. Kerry. They continued to attack the rebels, who are supported by the West, deliberately attacked hospitals and other civilian infrastructure, and prevented humanitarian convoys from reaching the cities where children were dying of starvation.

Mr. Kerry warned that in connection with such violations, the United States would be forced to turn to “Plan B,” that is, to increase support for rebel groups opposing Mr. Assad. However, as Josh Rogin wrote from the Post publication on Monday, 27 June, the US administration turned to Russia with a new proposal - now Mr. Putin will be able to get what he has been seeking for several months, namely closer cooperation between Russia and the United States in the process of combating anti-Assad rebel groups that are considered "terrorist". In exchange, Russia - again - will promise to reduce the intensity of its - and the Assad regime - air strikes in areas where the forces supported by the West are located.

According to several experts, the only result of this agreement will be the strengthening of the positions of the regime of Mr. Assad, whose cruelty led to the rise of the Islamic State and Al-Qaida (terrorist groups banned in the Russian Federation). As part of this agreement, Russia and the United States will jointly fight with one of the al-Qaida branches, called “Dzhebhat al-Nusra” (a terrorist group banned on the territory of the Russian Federation) and which fights against Mr. Assad’s regime in several areas Syria, including in Aleppo.

Meanwhile, in practice, the Jabhat al-Nusra forces are mixed with other rebel groups: many Syrian militants have joined the alleged terrorists for purely practical rather than ideological reasons. Attacking them could give Mr. Assad’s regime the opportunity to achieve his main goal - to capture Aleppo and, thus, to secure a serious advantage in civil war. The positions of anti-Assad forces supported by the West can be greatly affected, even if Russia and the Syrian regime comply with the restrictions of no-fly zones, which, as past experience shows, is highly unlikely.

US administration officials say they have no choice but to negotiate with Mr. Putin. According to them, the former “plan B” - strengthening support for the rebels - could only lead to an increase in the intensity of hostilities. It is these arguments that President Obama has used since 2012 to reject proposals for active support of anti-Assad forces, despite the fact that Syria and the entire region have plunged deeper into chaos, bloodshed and humanitarian crisis. Apparently, Mr. Obama is determined not to draw any lessons from his tragic mistakes in Syria. And the next US proposal - if Mr. Putin accepts it - will only aggravate the situation.