Fights near Aleppo exposed the differences between Russia and its allies 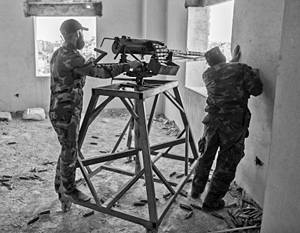 After the advance of the Syrian troops on Rakku choked, the fighting moved to other areas of the country. Mostly under Aleppo, where the clashes do not stop for a minute. And it was there that unexpectedly clearly manifested contradictions between the government army and its allies, primarily Russia and Iran.

The Government’s Syrian Arab Army (CAA) is the main military instrument of power, which is supported by Russian military contingents, intelligence, advisers and auxiliary units. It is with the General Staff of the CAA in Damascus, as well as with its representatives and senior officers in the field that the Russian base Chemeim coordinates its work.

This, however, goes without saying, since legally the Russian contingent is in Syria at the invitation of the government, and its powers are governed by interstate agreements and treaties. Finally, the system of unity of command must work even in the Arab world, therefore, the CAA and its General Staff are the highest military authority of Damascus, which plans military operations against jihadists. How and how successfully she does it is another question. It is important that the Syrian General Staff should contact all its allies, building a hierarchy of military submission and bringing orders to execution, while the Russian HVAC is only a tool of international assistance, and not a political argument. And precisely in this part in the last week and a half there was a clear misunderstanding, which is especially pronounced in the battles in and around Aleppo.

In the past eight days, the VKS RF has repeatedly struck areas to the north of Aleppo. Their participation played a key role in advancing parts of the CAA (primarily the Tigers assault division) in the Mallah farmland area, which are occupied by Dzhebhat al-Nusra and Harakat Nuriddin al-Zinki. Russian bombers attacked all the reinforcements of the jihadists before they could reach the front line. At the same time, objects and positions of Islamists in the mountains of Hanadat and the Anadan Valley were subjected to bombardment, the planes made up to 30 sorties a day.

Against this background, the 4-I mechanized division of government troops on Wednesday morning launched a new offensive in the northern sector - already in the city of Aleppo. The preliminary target was the industrial development area between the districts of al-Khalidiya and al-Layramun. Al-Khalidiya is now virtually cleared, but al-Lairamun is still controlled by jihadists (and quite a long time).

CAA promotion is extremely slow. In addition, in this area there are no key, iconic points, the seizure of which would be propaganda attractive. There is a heavy war routine that no one likes. The same Tiger division, considered elite (commanded by the well-known in Syria, Colonel Suhail Hassan) will not move until the Russian bombers have completed their positions in front of her. Even the message about the breakthrough of the first line of defense of the jihadists in Mallach was two days late, and there is still no information about the success of the offensive. And this is in an Arab country where good newsAs a rule, they are ahead of the event itself.

Local sources directly link this with the fact that in the morning of June 30 Russian planes did not take off. At all. After eight days of intense raids on the position of jihadists north of Aleppo, the VKS took time out and the CAA immediately stopped. Apparently, drink coffee.

More confusing is the situation south of Aleppo, where there is a war of all against all. The forces of the so-called moderate opposition periodically try to discourage several neighborhoods and gardens south and south-west of the city from ISIS, and the jihadists, in response, attempt to move westward. The presence of Iran is large in this area, both in the form of so-called volunteer units and in the form of units of the Islamic Revolutionary Guards officially present in the country. The Shiite militia is formally independent, but it focuses more on Iranian generals than on the General Staff in Damascus.
At the same time, Iranian and Shiite units south of Aleppo do not receive air support from the Russian Federation Air Force. Deprived of air support and the Kurds who surrounded Manbij. Americans fly to them extremely rarely and mostly not with combat missions, but with transport ones (that is, “donkeys work”, dropping cargo, fearing to drop to a dangerous height due to suspicions about the appearance of American MANPADS at ISIL). As a result, the Shiites and Kurds began to suffer heavy losses, which led to their sharp reaction to what was happening.

Accusations of treason rained down against Russian videoconferencing, but the notion that “Russia fell into the trap of the United States” dominates, agreeing to divide the zones of air responsibility and continue the endless process of separating “clean” oppositionists from “unclean”. The “peacemaking” is particularly annoying for the Allies - concluding local ceasefire agreements with specific groups that were not seen in ISIL relations, or with mukhtars (elders-mayors) of certain localities and local militia commanders.

This information wave has so far emanated exclusively from Tehran and its allied Beirut. Other Shiite allies of Damascus (for example, Hezbollah, completely independent in terms of making tactical military decisions) are involved in local operations in other regions of the country, without poisoning their consciousness with similar conspiracy constructs. Thus, on the Syrian-Lebanese border on Thursday morning, government forces, with the support of Hezbollah, destroyed several water pumps supplying drinking water to an ISIL base in the Jarud Jarajir region in the Kalamoun mountains. At the same time, the CAA and Hezbollah launched a military operation against terrorists in the same mountains, as recently the ISIS units attacked the Lebanese settlement of Jarud Ka'a and committed pogroms of non-Sunni populations there. At the same time, the CAA and Hezbollah emphasize that they received all the necessary intelligence information both on the ISIL camp and on the location of the water pumps from the “Russian advisers”. The situation is similar in the Golan Heights.
From the point of view of circles close to Tehran, Russia should “still push” in the Aleppo area, intensifying the bombardment of the positions of jihadists and “secular” oppositionists south of the city. And the point here is not that Russian air strikes are few. The fact is that they are consistent with Damascus and are aimed at supporting the actions of primarily government troops, and not the Persians or PMCs. The recent abandonment of the front under Rakka by the lauded Eagles of the Desert, by the way, is another argument in favor of dealing with the General Staff in Damascus, and not with a dozen small centers of influence.

Shiites and PMCs nevertheless continue to appeal to Moscow, openly demanding direct support. The more losses the Persians are south of Aleppo and the Kurds around Manbij, the more insulting the style that “talking heads” use in Tehran and Beirut. The current trend is something like “putinsley” in Persian, and the lack of departure of bombers with Hamim is considered almost a betrayal due to weather conditions.

This is already quite annoying. The Russian operation in Syria has been going on for almost 9 months, during which time outstanding military and political successes were achieved. But some participants in the events were so accustomed to Russian help - and aviation, and intelligence, and humanitarian - that ceased to feel without her. If a large white steel bird with a red star on its wings does not arrive, some will not distort the shutter.

Russia is facing this is not the first time, but in the East, such a parasitism on a blue-eyed and reliable ally sometimes takes extreme forms. Even mentally self-sufficient Kurds sat down on the mountains around Manbij, without any progress, than gave the initiative to LIH, and now they are sluggishly fighting off bagged jihadists, who have nowhere to go, so they are ready to go. Hence the large-scale use of suicide bombers to break through the first line of defense and destroy fortifications. In this regard, the death of June, a Russian soldier Andrei Timashenkov, who took the bomber’s suicide attack attempt to attack a humanitarian convoy in Homs province, is particularly revealing. Similar attacks on the positions of Persians, Shiites, Kurds and various PMCs end with the destruction of the front and heavy losses, as was the case, for example, with the recent ISIS counter-attack under Raqqa.
The blame for this “misunderstanding” lies partly in Damascus, which really “privatized” Russian military aid and does not want to share with anyone. It will not be possible to break the mentality of the Persians and other allies, he, too, is part of the game, but the CAA General Headquarters still needs to attend to a clearer planning of strategic operations. Determine the priorities and easily explain them to all allies, spreading them along the appropriate perches. And if the throwing between several strategic goals continues at the same time, the case may reach open sabotage.