"Dragoon campaign" and other games 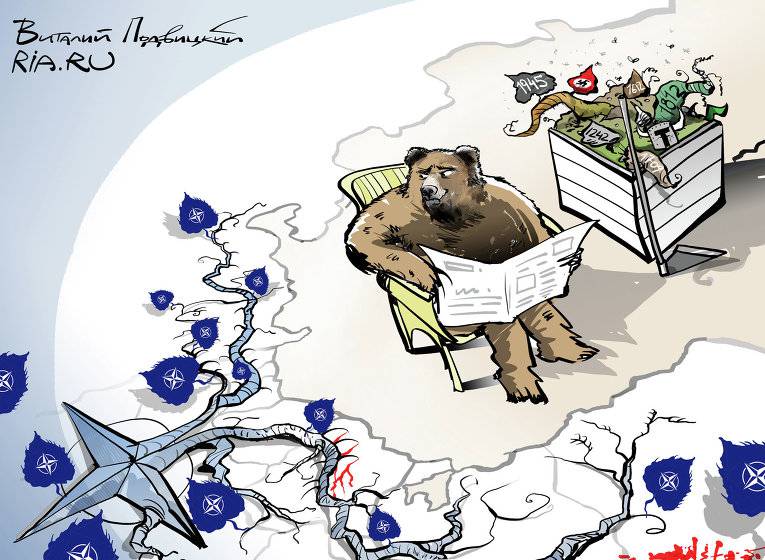 Last week, a series of multinational NATO exercises ended in the territories of Poland, the Baltic countries and in the Baltic Sea area, in which units and subunits of practically all branches of troops from 24 of NATO member countries, partner countries, as well as NATO amateur countries took part - Finland and Sweden.

The exercises were linked by a single plan, time frames, goals, and fulfilled tasks. More than 50, thousands of personnel, a large number of heavy weapons and armored vehicles, about 60 surface warships, more than three submarines, more than 100 airplanes and helicopters, including two B-52 strategic bomber (one of three dedicated for training B-52 returned to Avb Minot due to technical problems) and the AWACS E-3 aircraft. As we can see, considerable forces were attracted, but, due to the already ingrained habit of scaring the peoples of Europe and the local population with the “Russian threat”, representatives of the command of the exercises repeatedly stated that the number of participants was “nothing, compared with the number of troops of the Western Military District, conducting their maneuvers near the borders of NATO. "

The series of exercises included:
- SV - “Dragoon Ride II” (Dragoon Campaign) - the march of 2 of the United States Armed Forces and the German reconnaissance company from 12 of the German Federal Republic of Germany by two columns from Germany through the Czech Republic, Poland, Lithuania and Latvia to Estonia;
- “Saber Knight” (Swordsman) - multinational KShU in Estonia;
- “Saber Strike” (Sword Strike) is a multinational troop exercise conducted in Estonia with the participation of a motorized infantry platoon from Finland, Latvia and Lithuania. By the way, even before the exercises in Latvia, the rights of foreign pilots were expanded: all flights at low altitude in Latvian airspace are possible only during daylight hours - from 8: 00 to 18: 00, their duration can exceed three hours. Planes cannot fall below 61 meters above ground or potentially dangerous objects, and helicopters below meters 15. In addition, such flights are also prohibited from flying over cities whose population is less than 5 000 people. In one group there can be no more than four airplanes, the time interval between groups can be at least 30 seconds;
- “Iron Wolf 2016” (Iron Wolf) is a multinational military training in Lithuania with airborne dropping at the proving ground in the Svenjon area. It should be noted that for five days for the transfer of reinforcement forces from Germany, Denmark, the USA, Poland, France and Luxembourg, one seaport, airfields and Lithuanian railways were actively involved;
- “White Sword 2016” (White Sword) - military multinational teaching units of the rapid reaction force in the territory of three districts of Lithuania;
- “Anaconda-16” (Anaconda) - the final series of the largest military exercises in Poland - 31 thous. Military, 3 thous. transport equipment from 24 member countries of the alliance. The 2000 paratroopers dropping around Torun (presumably, the task of covering the Suvalk corridor from Poland to Lithuania), building a bridge over the Vistula river, landing troops from the sea, as well as all types of hostilities, including "storming" an unidentified object with the participation of 35 helicopters;
- OVVS - “Ramstein Alloy-2” (Ramstein Alloy) - a multinational exercise according to the plan of the NATO OVVS headquarters in Europe with the participation of Finland and Sweden. 20 aircraft from seven countries were involved. The control was carried out from the ground control point on Avb Emari (Estonia) and from the air control gear on the E-3 of the AWACS system;
- OVMS - “BALTOPS-2016” (Baltic operation) - multinational maneuvers according to plan and led by the headquarters of the Naval Shock Forces and NATO support (STRIKFORNATO) with the participation of the Swedish and Finnish Navy. In the course of the exercise, the B-52 bombers were used to place the mines. The interaction of disparate forces, missile defense, anti-aircraft defense and anti-missile defense were worked out It should be noted that, in fact, for the first time ships of Sweden and Finland worked out joint actions, and participation in the landing of troops on the territory of the Finnish peninsula of Hanko and the Swedish testing ground in Utya show that the policies of both Scandinavian countries are taking active measures to prepare for joining the alliance.

The exercises were conducted according to a single plan developed by the US Army headquarters in Europe. The general leadership was exercised by the American General Ben Hodges, commander of the US Navy in Europe, but the individual command held in the territories of Poland and the Baltic countries was led by the local command. In Estonia, for example, Lieutenant-General Riho Terras, commander-in-chief of the Estonian Defense Forces, commanded the exercise, while Polish Anatone was led by Lieutenant-General Marek Tomaszicki, etc. Thus, the NATO command tested the local generals for their ability to effectively lead troops in practice.

And rightly so, you need to know what local generals with "funny" troops are good at. After all, even in Poland, which currently has the most powerful army in Eastern Europe, a shortage of qualified generals was suddenly discovered. The fact is that after the nationalist party “Law and Justice” came to power in October 2015, a quarter of the country's generals were dismissed or dismissed. For various reasons, they did not satisfy the new authorities. As a result, it turned out that there was no one to send to the multinational command center of NATO in Szczecin. In addition, under the guise of anti-Russian statements, certain circles pushed the idea of ​​forming two volunteer brigades of the territorial army. The brigades were composed of members of the country's rifle clubs and paramilitary groups. But there are already serious fears that some of them are associated with racism-prone football hooligans. And these two brigades were supposed to help the professional Polish army during the Anaconda exercise. The military had no idea what to do with this replenishment, and experts believe that the Polish army is good without volunteers. Politicians had little discussion of the long-term vision of volunteer forces, but plenipotentiary minister Grzegorz Kwasniak called these forces “the fifth force after the army, aviation, fleet and special forces. " Apparently, politicians have some plans for this “fifth force”, especially since with the advent of the new Minister of Defense A. Macherevich, morale in the troops fell to a record low. Approximately the same picture is likely to appear soon in Lithuania, where they also thought about the formation of volunteer units.

In total, during the series of exercises, the planning of defensive and offensive combat operations, march training, the transfer of troops by various types of transport to the necessary areas, logistics issues along the routes and deployment areas, interaction with local authorities, landing from air and sea were worked out. means, inspections of engineering units during the guidance of crossings, combat operations with the support of aviation in defense and offensive, control and guidance of aviation from an E-3 aircraft and red aeronautics, deploying and providing aviation amplification.

In general, from a military point of view, a series of exercises conducted served to increase the level of combat training of all participating soldiers, from privates to senior commanders. This is if each of them is considered separately, but when they act as one team, then coordination of actions, management and communication will not work for one or two weeks. Especially if every year another part or subdivision takes part in the exercise, “working out joint actions”. As the NATO expert stated: “I’ll say frankly - the more diverse heterogeneous teams, the worse. On the contrary: the more homogeneous the troops are in terms of language, in preparation, the more they are soldered by previous exercises, the better. From this point of view, the multinational force is rather a policy. ” However, the NATO commanders intend to complete the development of a package of measures aimed at strengthening the defense of Eastern Europe at the alliance’s summit in Warsaw in July. Many politicians believe that Latvia, Lithuania and Estonia will become the main target of “revanchism” of Russia if its relations with NATO deteriorate further. According to NATO Secretary General J. Stoltenberg, strengthening the eastern flank of NATO is not, in his opinion, provoking an armed conflict. "It is important for us to prevent the start of war." Peacemaker and only.

As in most exercises, it was not without emergency in the course of this series. It began with the fact that even in Germany, when practicing the transfer of equipment by helicopters, three armored Humvees were broken down: the lines were poorly fixed. Nothing, they themselves were badly fixed, they themselves, laughing, filmed the falling of the equipment on video, they themselves posted the video on the Internet. But on the other hand, they learned, and already during the exercises, this did not happen.

As expected, not everywhere the local population happily greeted Americans. In the Czech Republic, the chairman of the Czech Peace Movement, Milan Krajca, organized demonstrations on the path of the American convoy. In the same place the first car of a convoy broke and lagged behind. But a curious incident became a hit: one of the protesters, who, incidentally, was a war veteran in the former Yugoslavia and knowing firsthand about the cost of American democracy, ran onto the road, stopped in front of the American jeep, pulled his pants off and showed the American soldier how he “Appreciates their friendship” and where they should go.

And in Latvian Latgale, in front of the city of Daugavpils, on the side of the highway, a large poster was inscribed (in translation) “NATO is a murderer! Yankees go home! ”The second half of the text is so well known throughout the world that it does not require translation. True, the police discovered and removed the poster before the appearance of the 2 machines of the obrkp, zealously took up the search for artists, but ... did not find it.

Do not have time to start the exercise "Anaconda" in Poland, as an American military truck collided with a civilian vehicle, resulting in the death of one of the passengers of the car. And although the exercises after this incident continued for another week, there was no additional news in the press. Of course, no one yet knows the cause of the accident, but one thing the Poles need to know right now - in any case, an American soldier will not be extradited to the court of a foreign country. This is confirmed by the experience of Fr. Okinawa, Kosovo, Serbia, etc.

And in general, in many ways the whole series of exercises was a big PR campaign. After all, it is in a sense symbolism: to visit as many places as possible, leave as many contacts as possible, traces and demonstrate the flag. After all, the main thing is to convince the Aborigines that they have a defender - a powerful NATO bloc. Whether there really is a “Russian threat” is practically unimportant. It is important to preserve and increase military budgets.