22 2016 June
20
Blog chervonec_001 published another summary of the military officer "Mag" about the main events that occurred in the Donetsk Republic over the past week. 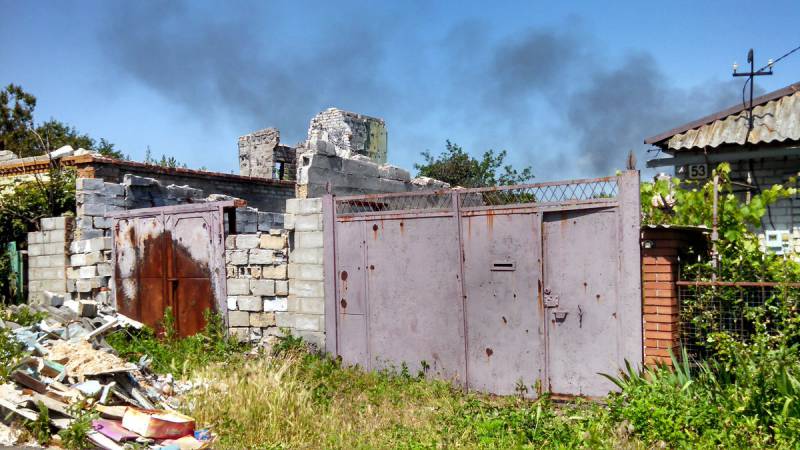 The summary states the following:

«15 June, Wednesday.
It continued to rattle west of Donetsk and north-west of Gorlovka almost to the first rays of the sun. On the rest of the sites it was quiet. In 17 hours began to rain. In 19: The 20 of the Armed Forces of Ukraine began shelling under Dokuchaevsk, Volvo-Center, Airport, Spartak, YAPG (traffic police station Yasinovatsky). In 22: The 00 APU began shelling Trudovskys in the Petrovsky district of Donetsk. Until one o'clock in the morning, these directions continued unabated. In just one day, we 340 once came under fire.

16 June, Thursday.
From about 18 o’clock the inhabitants of the Petrovsky district heard strong cannonade from Maryinka and Krasnogorovka. All weapons worked, from small arms to artillery and tanks. Rather, the tank that crawled out onto the hill made 1-2 shots and crawled back.

Later it turned out that in 20: 00 at the crossing between the checkpoint Marinka and Donetsk, during an artillery attack on the part of the Armed Forces of Ukraine, two civilians were injured, because of which the passage was temporarily closed. Fighting there lasted for three hours. In general, the evening was quiet, with the exception of the shelling of Petrovsky district - Marinka and the rare 120-mm min arrivals in the north-west of Gorlovka.

With 21: 40, heavy 152-mm blanks began to fly in the Petrovsky district.
From about 21: 00 shelling and fighting began in Staromikhailovka.

From 23: 00 to 23: 40 fired on all the western and northern suburbs of Donetsk, right up to Yasinovataya. The southern part of the DPR of Cominternovo and Sakhanka was also under fire. In 23: The 40 APU simultaneously stopped firing and shelling.

I quote the official report of the DPR: “From the city of Kurakhovo, the 152 mm 10 howitzers battery of the Armed Forces of Ukraine APU conducted a provocative bombardment of residential buildings in Krasnogorovka and our positions in the Staromikhailovka area. 14 brigades of the Armed Forces of Ukraine. In the morning the militants of the Dnipro group attacked the rifle weapons nine-storey building, which temporarily accommodates the Ukrainian military. "

17 June, Friday.
Good Friday came news. In the industrial zone, in the Avdiivka area, we advanced 300 meters closer to Avdiivka.

The night was quiet. In 15: 30, shelling of the Petrovsky district began, in 15: 45 a woman was injured. Until 19, everything was quiet, a little later, shelling began with machine guns and mortars of Petrovsky district, Airport, Spartak. In 21: 30 began shelling from three directions at once, 120-mm mortars were working.

23: 00. Shelling of Petrovsky district, shooting battles and mortar duels continues. Something this week they are shooting at him heavily, and before that, from March to May, it was quieter. In Avdiivka, again disassembly between the APU, "Azov", which is listed as the 24 battalion of the Armed Forces of Ukraine, and the Romanian PMC. Semenchenko, by the way, left his comment about the loss of his "comrade". In just a week of such conflicts, 18 was killed and 25 military wounded.

More explosions on mines. As a result of the absence of maps of their minefields in the units of the Supreme Soviet of Ukraine, explosions on land mines and mines continue. In the 14 th brigade of the 72 th battalion, two servicemen died, one of them was a senior officer, due to an explosion on a land mine. In the 46 th separate battalion of the Special Forces of the Ukrainian Armed Forces, two servicemen died and four were injured while crossing their own minefield. During this day, the republic was fired 490 times.


18 June, Saturday.
Before 21: 30 was quiet, which is very surprising. Usually starting from Friday, and in the last three weeks from Thursday to Monday, shelling was carried out almost without interruption. And then until the night the Ukrainian Armed Forces gave us a break and rest. We will not call 1-2 firing mines an hour firing on the private sector from a heavy machine gun.

I imagine a fallen mine in the private sector of London or Paris or Brussels. Probably all the media would be buzzing for a week, carrying mountains of flowers and toys to that place, and politicians would go and hold hands. And here it is no longer considered to be shelling, well, the 120-mm mine arrived at the shop in Staromikhailovka, so what? Two civilians were killed in Makeyevka, a woman and a man. The man immediately, and the woman was wounded in the stomach and was not taken to the hospitals. So here we live ...

In 22: 40 again, the APU from various directions imitate attacks by manpower and equipment under the cover of mortars and arts in the Kominternovo-Sakhanka area. Everyer they fire at every day and begin battles in various sectors of the front near Cominternovo. Looking for a weak spot?
From 23: 20 to 23: Our 40 gave an answer. Short otvetka was in terms of the number of guns and in terms of the number of volleys.

Here again, we were shot at about 300 times during this day. Moreover, short shelling from small arms and mortars are not even recorded. We gave 20 an ounce of minutes, actually 1 times. Maybe somewhere else they gave, I do not know. But the fact of the difference in the number of shelling by the Armed Forces of Ukraine and our response is obvious.

By the way, there is criticism from the Ukrainians: “Shelling, shelling, and where are the facts or the victims?”. Here is a short list of injured home hits of the Armed Forces of Ukraine in an hour:


19 June, Sunday.
On Sunday, surprisingly less shelling, and at times. With the 19 clock, Petrovsky District and Staromikhailovka are booming. Everything went on until 23: 30, ours started giving an answer, in the Krasnogorovka area the ammunition depot was destroyed and the 120-mm mortar packs of the APU standing nearby, then the APU subsided and everyone went to sleep.

Over the past day, the Ukrainian Armed Forces fired 370 cities in the republic once and for all.


20 June, Monday.
Until the 21 hour, it was quiet, not counting the usual morning overflights of the UAV UAV and the work of the VSN anti-aircraft guns.
With 21: 10, shelling of the northern suburbs began with BMP-2, mortars, AGS and grenade launchers.

Until 23: 50 fighting and shelling continued. There was information that the Ukrainian Armed Forces moved five Su-25 attack aircraft to Severodonetsk airfield, this is in 30 km north of the front. Appeared at the disposal of the APU American signal mines, photo below. 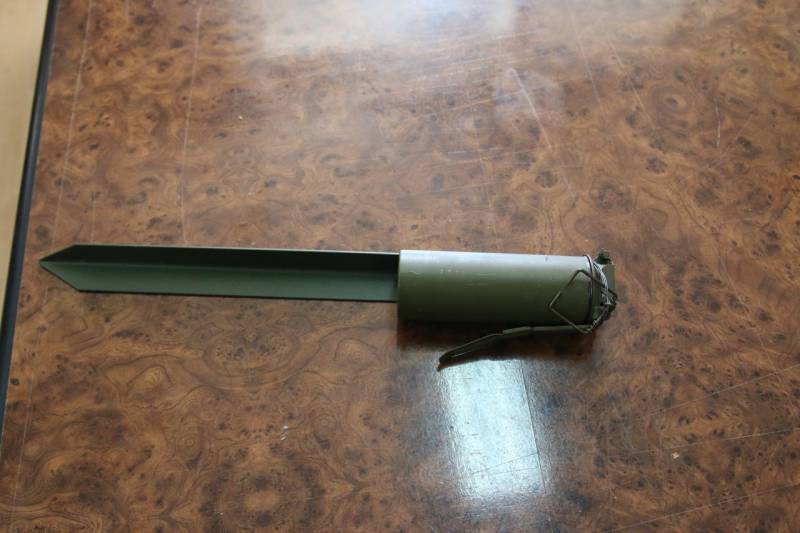 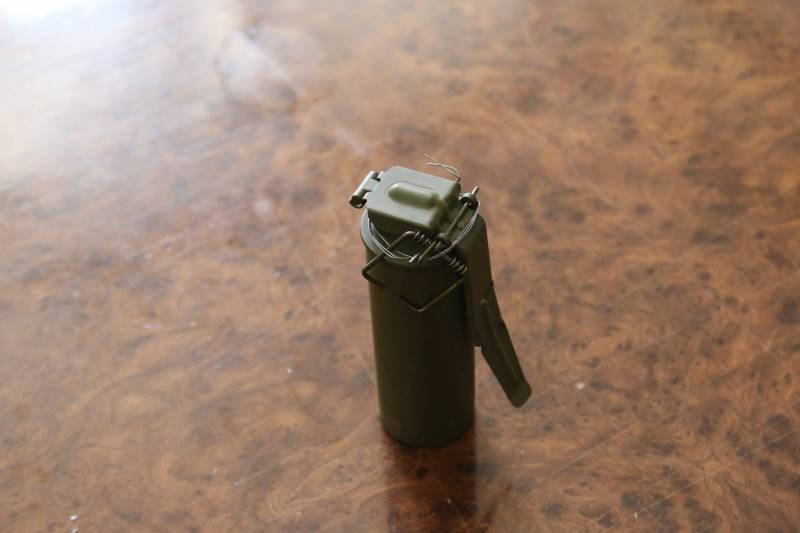 On this relatively quiet Monday, we were bombarded with 440 times.


21 June, Tuesday.
According to the same program, with the 17 clock, the work of the VSN anti-aircraft guns on the UAV UAV, two UAVs fly over Donetsk, and from the 21 hours it is small and AGS with mortars in the northern suburbs of Donetsk and north-western Gorlovka. Again everything went on until 00: 00.