Nikolai Starikov "On the memorial plaque to Mannerheim and the bridge named after Akhmat Kadyrov."

21 2016 June
259
Last week in St. Petersburg two events took place directly related not only to the past, but also to the future. After all история - this is not just a list of events that went back centuries, but also the most important element in educating the patriots of their country. From this point of view, I would like to talk about the memorial plaque to Karl Gustav Mannerheim and the appropriation of the bridge across the Dudergofsky Channel named after Akhmat Kadyrov.


Let's start with the most important thing: why do we need monuments? Why do we need historical memory? So that the young man can separate the truth from the lie, the hero from the traitor, the good for his country from the atrocities against it. Heroes should be sung along with their accomplishment, giving an example, showing the direction of thoughts and actions. And those actions and deeds that society and the state do not want to see in the future should in no way be chanted and embodied in monuments and memorable names. It would seem - everything is very simple. But in the life of such simplicity and clarity, we still have not been able to achieve.

Why? Yes, because when making a decision “to call - not to call”, “to establish - not to establish”, the criteria have not yet been worked out.

Let's try to help in the development of such criteria. After all, neither the first nor the last monument can cause a sharp public debate and even bewilderment in a significant part of our society. Therefore, for the future we must simply develop the position of the state and society in such matters.

So, the criteria. In my opinion, they should be as follows:

.... From the side of the person whose name is planned to perpetuate the feat in the history of our country should be accomplished, an indisputable and significant contribution to the development (preservation) of our country has been made;
.... On the part of the person whose name is planned to be immortalized, during the course of his life, either actions that can be evaluated as a struggle against Russia or his feat must be accomplished after this “dark” episode of his biography, after his sincere transition to the side of Russia.
The political history of our country is full of complex events, but, guided by these criteria, we will be able to understand them and make the right conclusion - whether or not to install a monument (assign a name).

And now we return to the two events that have occurred and try to evaluate them. 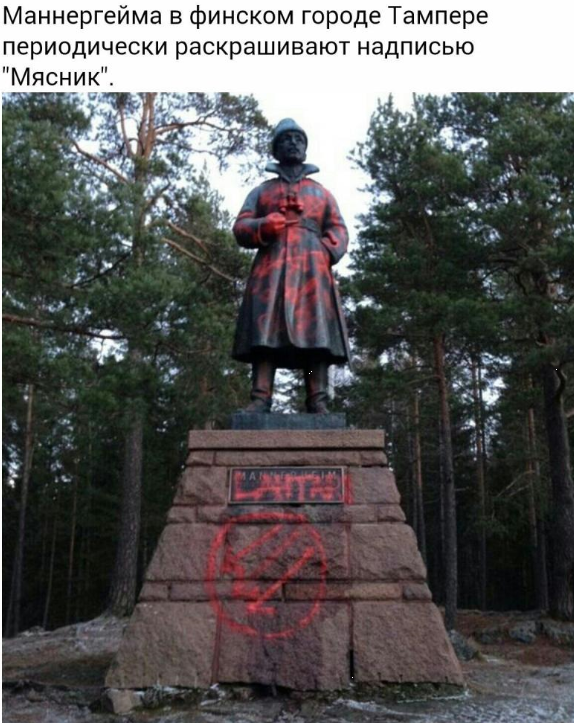 A memorial plaque was installed on the building of the Military Engineering and Technical University with the name of General of the Russian Army, and later - Marshal and President of Finland Carl Gustav Mannerheim.

We ask ourselves the question: what is the feat (contribution) of Mannerheim in the history of our country? Being an ethnic Swede and a native of Finland, he was a general of the Russian army and faithfully served his Fatherland, as the commemorative plaque informs us. It says so: “Lieutenant-General of the Russian army, served: 1887 – 1918”. At the same time, it is impossible to say that during this period they committed some absolutely outstanding acts to the glory of Russia. Mannerheim was “one of”. But what happened after 1918 year deserves much more attention than to just leave it “beyond the table”.

During the collapse of our state, Mannerheim chose the easiest way - he did not try to fight for the restoration of “Russia that we lost”, but became one of the main creators of the independent Finnish state, which received this very independence from the hands of V.I. Lenin. But if Mannerheim’s behavior during the Civil War, both in Russia and in Finland, is difficult to assess because of the complexity of the very situation of civil fratricidal conflict, then his activity as the head of Finland in a later period does not cause any doubts.

Former Russian general Karl Gustav Mannerheim fought with Russia, led the separatist branch of the Russian Empire from Russia, and assisted the worst enemy of our Motherland in its entire history - Adolf Hitler.

Thus, Mannerheim committed deeds to the glory of Russia at the beginning of his life’s journey, and then became the enemy of our state. For those who forgot - the Finnish army during World War II was one of the parts of the death ring with which the Nazis strangled Leningrad. It is impossible to separate Hitler’s guilt from Mannerheim’s guilt in the deaths of hundreds of thousands (more than a million!) Of Leningrad, although, of course, the lion’s share of the blame for the tragedy lies with the Fuhrer of the Third Reich. But the Third Reich had allies and the army of one of them was led by Carl Gustav Mannerheim. In my family, the blockade took the lives of many families. My maternal grandmother lost her one-year-old daughter, and my father, being a year old, lost her mother — my second grandmother, whom my father “thanks” to Mannerheim and Hitler had never seen. This is not my family has forgotten. This was not forgotten by the other inhabitants of Leningrad, which today is called as it was called during the times of the imperial military youth of Mannerheim. Perhaps, as they want to explain to us today, Mannerheim was also a “noble adversary,” but this does not cancel the fact of his alliance with Nazi Germany. (By the way, I would like to remind you that in the besieged Leningrad, the brother of our president, VV Putin, died and his mother almost died).

Is it possible and necessary to install a memorial plaque to Mannerheim? Definitely not. All of his ministry to Russia was crossed out by his ministry to the enemies of Russia and participation in the war against our country. In the very war that today is justly called the Great Patriotic War. Mannerheim’s memorial plaque is not needed in Russia. The desire to like Finland, to please the “white” part of the Russian patriotic spectrum in this case is absolutely inappropriate. But it is already hanging, what to do? Immediately do nothing. And then the memorial plaque to Mannerheim can be moved to the internal “places” of the Military Engineering and Technical University, and then, when the passions subside, they are “quietly” dismantled.

Otherwise, in the same logic, it is necessary to establish a memorial plaque to General Vlasov in Moscow, because, being a loyal Stalinist general, he defended the capital from the fascists. Until he went to their service. This fact can be forgotten, as its alliance with the enemies of Russia and its two wars with it were forgotten on the memorial board of Mannerheim. So, the monuments of “Vlasov”, “red”, “skin” should not be on Russian soil, precisely because of their service to the worst enemies of our state, which completely devalued all their past services to Russia. 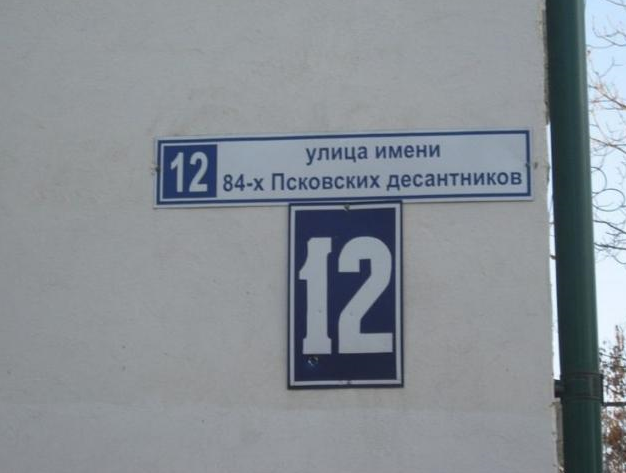 The government of St. Petersburg has decided to assign the bridge across the Duderhof Canal in Krasnoselsky District named after Hero of Russia Akhmat Kadyrov.

Again, we use our criteria. I expressed my attitude towards the assignment of the bridge named after Akhmat Kadyrov on the day when news appeared on news feeds. Apply the evaluation criteria, which we talked about above, to this situation. And we will see a situation in which, during the regular turmoil in our country, Akhmat Kadyrov was on the side of her enemies. But he found the courage to realize the death of this path for the Chechen people and to begin actions to end the war in Chechnya. It was much easier to continue to “fight”, and then “heroically” flee to London and from there condemn the “bloody regime”. Akhmat Kadyrov chose the path of struggle for the future of Russia, realizing that this path is dangerous. He paid with his life for his choice. But his son, Ramzan Akhmatovich Kadyrov, and the entire Chechen people, with the exception of a few renegades, continued his business.

What Akhmat Kadyrov did was a feat. How many human lives he helped save, along with V.V. Putin did everything to stop the death of Chechen civilians, her men, misguided by propaganda and taken in their hands weapon, soldiers and policemen from the rest of Russia.

But that is not all

My attitude to the assignment of one of the bridges in the city named after Akhmat Kadyrov is also made up of the following postulates. First, Saint-Petersburg - is the imperial capital. It was from here that Russia stepped into imperial greatness — gained such influence in the world that none of the guns fired at Europe without our knowledge. And the empire is a symphony of the peoples that enter it. This is a huge precious mosaic of peoples and nationalities in which everyone is equal to each other and all serve. The Russian Empire was built as a state in which people of any small people could make their contribution to the development of the state. Only with us, troops on Borodino’s field could command ethnic Georgian Bagration to give their lives for Russia and forever become its hero. It is in St. Petersburg that the perpetuation of any hero of the Empire is most appropriate.

Second, Akhmad Kadyrov - the Hero of Russia. In any place of the country, the name of her Hero is a matter of pride. A hero of any nationality can and should be an example to follow in any part of a great state. The feat of the Hero of Russia is not tied to the place of his birth - after all, life was given for the whole country. Therefore, the name of a hero of any nationality in Russia is appropriate, even if he was born in another region. There can be no “not our” heroes - they are all ours, we are proud of them all. Only in this way can we preserve the great multinational Russian civilization.

Third. Akhmat Kadyrov stopped the war in Chechnya and paid for it with his life. Thanks to his courage, young citizens, including draftees and law enforcement officers from St. Petersburg, stopped dying in this war.

And finally, the fourth: once the poet Brodsky was asked how he relates to collective farms. To which he asked: how does Yevtushenko relate to them? They said to him: “Yevtushenko spoke out against the collective farms.” “If so, then I am for it,” answered Joseph Brodsky. I propose to see who organized the attempts to prevent the appropriation of the St. Petersburg Bridge named after Akhmat Kadyrov. These are representatives of Yabloko, Parnas, Party of Growth and other anti-state liberal parties and organizations. These are the same persons and groups that opposed the restoration of the unity of Russia and the Crimea. Those who are ready to give the country at the mercy of the West and transfer the Crimea as if it were a bag of potatoes, and not 2 million of our fellow citizens.

Looking at all these “democratic” personalities, knowing what they said and did before, what they are, it’s not difficult to answer the question: “Can the name of Hero of Russia Akhmat Kadyrov be assigned to the bridge in St. Petersburg?” . Definitely, yes.

Without even thinking about all the above arguments.

If all such figures are “against”, then I am “for”.
https://www.youtube.com/watch?v=nKBg0OXl6rI