17 2016 June
98
Gaining momentum St. Petersburg International Economic Forum, which is attended by hundreds of experts from around the world. Among the guests of the forum are such figures as UN Secretary-General Ban Ki-moon, European Commission President Jean-Claude Juncker, Italian Prime Minister Matteo Renzi and others. Despite loud statements from foreign "partners" about the need to consolidate efforts to overcome the accumulated differences the economy, the EU has again extended anti-Russian sanctions.


One of the topics of the economic forum is connected with the influence on the world economy of a possible exit of Great Britain from the EU (Brexit). The Italian Prime Minister said that such a move would bring serious problems both to the economy of the entire EU and to the economy of Britain itself. According to Renzi, he hopes to win in the referendum on Foggy Albion from those who retain loyalty to the European Union. Representatives of the Russian economic bloc said that the so-called Brexit is unlikely to be able to influence the Russian economy.

The topic concerning Britain was raised during the speech of Russian President Vladimir Putin. That's just it is no longer concerned with the economy. Vladimir Putin commented on the situation with the detention of Russian fans after clashes with English fans.

Vladimir Putin quotes RIA News:
I do not know how our 200 fans marked several thousand Englishmen there, I don’t understand. In my opinion, less attention is already being paid to football than to fan fights. Very sad. And I regret it. 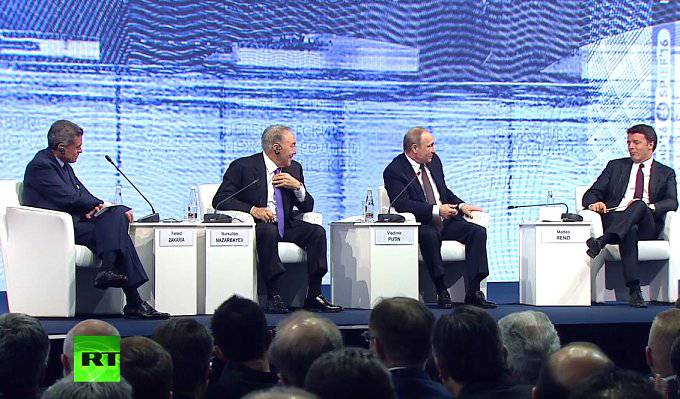 Commented on the President of Russia and the statement of US presidential candidate Donald Trump, expressed the other day. During one of the campaign speeches, Trump announced his intention to restore relations with Russia. Comment from Vladimir Putin:
We presume that the feeling of responsibility of the head of the American state, the head of the country, on which a lot of things in the world today depend, that this sense of responsibility will encourage the newly elected president to cooperate with Russia and, once again, I want to emphasize, to create a safer world.

At the same time, Vladimir Putin added that he did not want American pressure to extend to relations between Russia and the European Union.

Commenting on the statements of the American administration that the issue of attacking government forces in Syria is being considered, the Russian president noted that it would not be possible to establish democracy by force in Syria. According to Putin, if it continues what is happening in Syria today, the country can expect a collapse. According to the President of the Russian Federation, this (the collapse of the SAR) cannot be allowed.

Not paid attention to Vladimir Putin and Donbass topic. According to the president, he agrees with Poroshenko’s proposal to strengthen the OSCE mission in the Donbas - with the right to personal weapon for mission staff. Recall that in the Donbass rallies were held at which local residents spoke out against the introduction of a police mission in the region and said that they themselves were ready to ensure security in local elections.

Commenting on the current geopolitical situation, the head of state said that "Western support for the color revolution around the world has led to real chaos." Regarding the Ukrainian authorities, the Russian president said the following:
If the current authorities of Ukraine took the helm of the state in a democratic way, then we could work with them calmly.