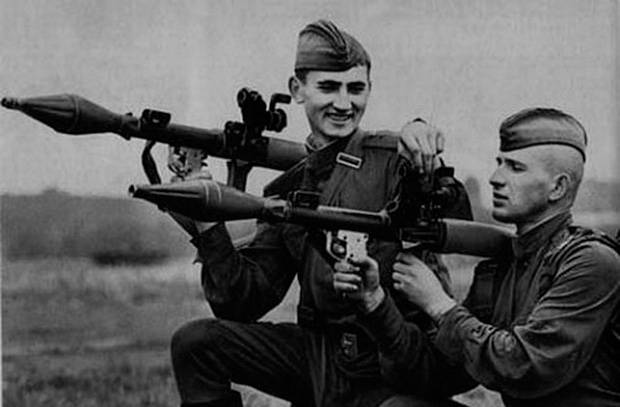 June 15, 1961 adopted the legendary anti-tank system, which became one of the symbols of the Russian armory schools - RPG-7 grenade launcher

In a long series of samples of Russian weapons, which made up the special glory of domestic gunsmiths and became real legends, there was a place for the RPG-7 hand-held anti-tank grenade launcher. Adopted by the Soviet Army on 15 on June 1961 of the year, it is by far the most massive anti-tank grenade launcher of this type in the world. Officially, the RPG-7 is in service with the armies of more than fifty countries, is used by more than 80, and unofficially they are armed with almost all illegal armed groups.

Like any other weapon that came into being after the Second World War, the RPG grenade launcher inherited several systems tested in battle at once. The main ones were German faustprony (under this name in the Soviet Union then understood all varieties of German hand grenade launchers) and American bazookas. However, the G-7 also had domestic predecessors, although they did not appear immediately - and not simply.

In the book of memoirs "About artillery and a little about yourself" Nikolai Yakovlev, who from June 1941 of the year and until the end of the war headed the Main Artillery Directorate of the Red Army, that is, actually determined the policy in the field of artillery weapons, supplies and production, there is such a remarkable passage that is very important for understanding stories the appearance of Soviet RPGs. “I cannot but note such a regrettable fact that our troops were rather poorly provided with, for example, weapons such as the Faustpatron of the Germans. But he perfectly proved himself in the anti-tank battle, - writes the artillery marshal Yakovlev. “But I will be self-critical: GAU, and consequently, I, as its chief, did not show the necessary perseverance to prove the combat value of such anti-tank weapons.” Why, even when the advantages of the disposable Faustpatron grenade launchers became quite obvious, did the Soviet Union not try to create something like that? Apparently, the reason for this was the impossibility in the military environment to develop and put on stream a completely new type of weapon. “The entire course of the discussions that took place at Headquarters almost from the first weeks of the war came down to the earliest possible creation of anti-tank rifles,” writes Yakovlev. - In the fall of 1941, for example, it was decided to establish production of the captured 7,92 mm German anti-tank gun as soon as possible. And this was done, despite the difficult situation in our industry. Made, but in completely insufficient quantities. At the same time, domestic 14,5-mm anti-tank rifles appeared. And although they were significantly superior in weight to the German ones, in terms of cartridge caliber and even in the range of a direct shot they were much more powerful. Then came the discussion about the value of sub-caliber and cumulative shells, which made it possible to fight against the Nazi at relatively large ranges tanks».

“But all this was not that, not that! - continues Nikolai Yakovlev. - Such shells are good. But after all, it was supposed to be about more powerful means of close combat! I repeat, there were no active supporters of such anti-tank warfare tools as the Faustpatron in the GAU. It was believed that since even 50-mm mortar is not popular in the troops because of the short range, then why, they say, create some other means of close combat along with the MTR. In addition, they say, there are anti-tank grenades. As a result, we have not created a weapon similar to the one that the enemy had. But the enemy, I repeat, very effectively, especially in the last months of the war, used faustpatrony against tanks and in battles in populated areas. ”

However, for some reason, Marshal Yakovlev is silent about the fact that it was GAU in 1944 that year insisted on the creation of the first domestic model of a hand-held anti-tank grenade launcher - the RPG-1. And even if this model was not put into service because of the numerous shortcomings inherent to the firstborn of any weapon system, the main features of the future RPG-7 can be seen in it. Unlike German and American grenade launchers, it was muzzle-loading, had a characteristic pistol grip shifted to the front, and a wooden trunk lining. 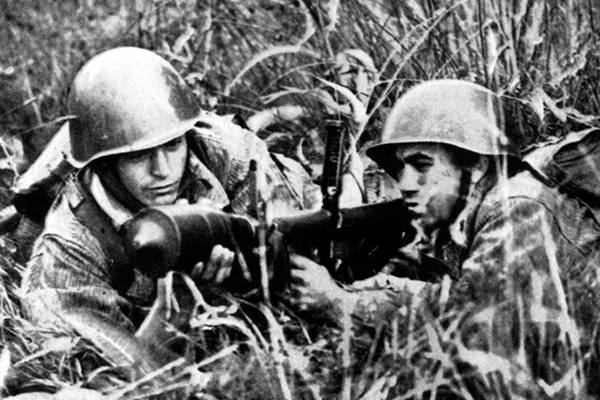 RPG-1 anti-tank rocket launcher. Photo: bastion-opk.ru
Tests of the RPG-1 lasted for a year, almost to the end of the war, and refinement - to 1948 year. But by this time, Russian gunsmiths and gunners had already managed to study and experience the development and use of faustpatrons, and the experience of the American army, which received bazooka weapons - that is, the same anti-tank grenade launchers, but in a more relaxed atmosphere. And that is why the RPG-1, obviously late for its time, remained a prototype, and in the Soviet army it was replaced by the RPG-1947 adopted for use in 2 year.


"Two" inherited from its predecessor - RPG-1 - many recognizable features, but at the same time it is more similar to its heir - the "seven". And this is natural, since the principle of construction and operation of this type of weapon is unchanged, and only the used ammunition can be modified, as well as the form and equipment of the grenade launcher. And they depend on the results of field and military tests. And the RPG-2 passed them with honor. After being put into service in the USSR, it quickly spread to the west, through all the armies of the Warsaw Pact member countries, and also to the east - to China and North Korea. And although the deuce did not take part in the Korean war itself, by the beginning of the Vietnam War it was sufficient in the original Soviet and licensed Chinese export versions in parts of the North Vietnamese army and the National Liberation Front of South Vietnam. And soon she was replaced by the "seven" ...

This future legend of all armed clashes and local conflicts, beginning with the end of the 1960, is due to the displeasure that the Main Artillery Directorate brought to the beginning of the 1950's all the models of armed anti-tank grenade launchers — and the experience that Soviet military specialists received during the Korean War. And it followed that to this type of system, in addition to the requirements of reliability and mobility (and they RPG-2, which had a paper case of powder charge, did not differ: if it got wet, the weapon could not be loaded, and it was impossible to carry it curbed the fragility of the design of the liner) and high armor penetration, there is another requirement - versatility. A new type of hand-held grenade launcher had to be able to destroy not only tanks, although this was his main task, but also to fire at the shelters of enemy personnel. And this required a more powerful charge, and a long range of fire, and its greater accuracy, and better reliability and survivability of the grenade launcher.

To avoid leapfrogging and shifting responsibility for the development of a new grenade launcher from the design bureau to the design bureau, as it happened before, the government in 1956 put the responsibility for creating a new system at Moscow GSKB-47, which appeared in 1938 and initially was responsible for the development of aerial bombs. During the war years, the scope of CB activity expanded significantly: mines of various purposes, including mortars, flamethrowers and sabotage weapons, fell into it, and by the beginning of 1950-x GSKB-47 was occupied with almost the entire nomenclature of conventional ammunition of all types. And therefore he was made the general contractor for the development of a new grenade launcher system, in which more than a dozen specialized research institutes, design bureaus and factories were involved in the work on which. In particular, specialists from the Kovrovsky Design Bureau 575 (chief designer Vladimir Degtyarev, the son of the legendary gunsmith Vasily Degtyarev) were directly involved in the development and construction of the grenade launcher; in the suburban town of Zheleznodorozhny). And in the end, in just three years, the work was completed: in the summer of 604, the RPG-1959 manual grenade launcher complex was demonstrated to USSR Defense Minister Rodion Malinovsky, who liked the new weapon. After working out the comments received during the demonstration in 7, the complex was submitted to the test site stretching for almost a year, and on June 1960 of the year 15 was adopted by the Soviet Army by resolution of the USSR Council of Ministers No. 1961-535.

From this day began the legendary history of the RPG-7, which has become a real symbol not only of the Russian weapons school, but of the entire type of such weapons in general. Along with the American name “bazooka”, the abbreviation RPG is widely used today - and it appeared as a backronym, that is, an attempt to adapt the Russian abbreviation to the English version of the name “rocket-propelled grenade”.

The history of the combat use of the RPN-7 over 40 and more than its years of existence will require much more space than the history of its creation. After all, there will be a place in it for a story about how this weapon, created as an anti-tank weapon, during the Vietnam War, suddenly proved to be anti-aircraft: the Vietnamese military shot down a total of 128 American helicopters! There will be a place in this story for a sad story about how Russian soldiers on their own experience evaluated the extreme effectiveness of the RPG-7 as a means of fighting the enemy's manpower: first in Afghanistan, and then in Chechnya. And about how this complex and tactics of use were adopted by illegal military formations and insurgent movements around the world — even today there is hardly a local conflict or a civil war in which no gunfire from this weapon would sound.

It is noteworthy that the chief designer of the RPG-7, Vladimir Degtyarev, managed to see the entire long triumphal path of his creation. He did not live to see the 45 anniversary of its adoption for exactly four months, leaving 15 February 2016 of the year ...