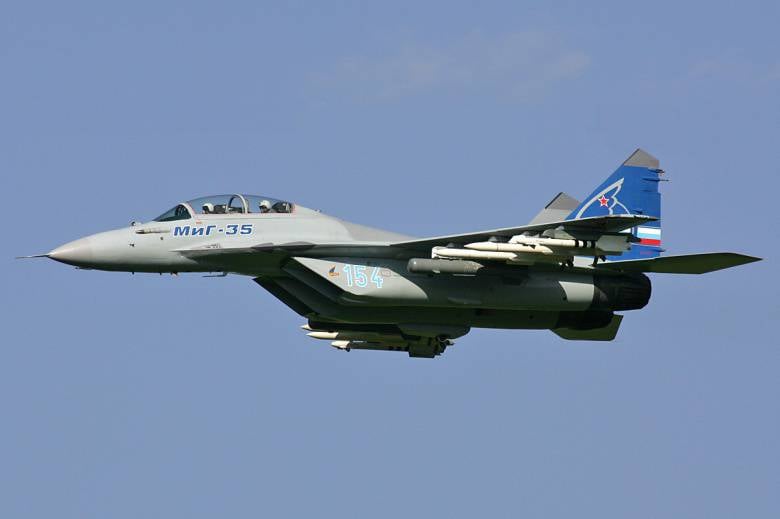 The Mikoyan MiG-35 Fulcrum - F will be ready for test flights in the 2017 year, while deliveries to Russian aerospace forces will begin in the 2018 year.

Flight tests of the MiG-29 fighter - they were originally scheduled for this summer - were postponed due to delays in production.

“Under the contract with the Ministry of Defense on the MiG-35, development work is ongoing,” said the head of the Directorate of Military Programs aviation United Aircraft Corporation (UAC) Vladimir Mikhailov in an interview with the correspondent of the TASS agency located in Moscow. “They come with a slight lag behind the schedule due to the fault of cooperation enterprises delaying the supply of components, but we can say that in general this problem is being solved.”

However, the Russian Aircraft Manufacturing Corporation MiG, which is part of the KLA, seems to intend to catch up. “We are catching up with the schedule,” said Mikhailov. “In the 2017, the very short-term tests of the machine will take place, since its prototype has already been tested many times. In 2018, the aircraft will begin to enter the VKS (Aerospace Forces). ”

At the same time, the Russian Aircraft Manufacturing Corporation MiG, which is part of the UAC, has not yet signed a contract for the production of aircraft with the Russian Ministry of Defense. This will be done only after completion of the test. However, the Russian air force had previously declared its readiness to purchase the first batch of MiG-35 fighters in the number of 37 units. The aircraft will be ready for operational use in the 2020 year.

The MiG-35 is an upgraded version of the MiG-29. Although the airframe does not differ from previous versions, the aircraft received practically new equipment. Compared with the original version, the MiG-35 is equipped with a completely new electrical remote control system, it has a lighter airframe, more spacious fuel tanks, more efficient engines, and nozzles with thrust vector-controlled engines. In addition, the Russians developed single and double versions of the aircraft, while maintaining the same external contour to achieve maximum unification.

More importantly, the MiG-35 has a completely new avionics package. The upgraded fighter will be equipped with the first Russian developed for fighters onboard radar with a phased array called the "Beetle-ME". This radar is able to detect targets the size of a fighter at a distance of more than 150 kilometers (more than 85 nautical miles).

The MiG-35 will also be equipped with a unique optical-location station (OLS), which is a passive electro-optical sensor operating in both visual mode and in the infrared range. Russians believe that the sensor will be useful in the fight against such aircraft with a system of reduced visibility as F-22 and F-35. The MiG-35 will also receive a powerful installation of electronic warfare - this is precisely the area where the Russians have achieved brilliant successes.

The Russian Aircraft Manufacturing Corporation MiG - it is under the auspices of the United Aircraft Building Corporation, like its main competitor, Sukhoi - hopes to reclaim some of the past glory of the Mikoyan design bureau using an upgraded version of the MiG-29. These fighters, developed by the Russian Aircraft Manufacturing Corporation MiG, in the aftermath of the collapse of the Soviet Union were in the shadow of a larger and more powerful Su-27. Perhaps the MiG-35 is the last hope of the RSK -MiG on the return of the part of the lost share in the international fighter market.